Live music and après go together like bluebird pow and goggle tans. Nobody knows that better than mountain town musician Curtiss O’Rorke Stedman, who goes by the name Cousin Curtiss when he’s up on stage.

Curtiss’ fast-paced, high-energy stage presence combines multi-instrument talent with live loop recording and soulful vocals. When not touring, he calls Telluride, Colorado home. When he’s on the road, you can usually find him playing ski town venues around the West.

He loves living in and touring mountain towns, not only because playing nighttime allows for a lot of daytime skiing, but also because he feeds off the unique ski town energy at his shows. I met up with him at Snowbird for a couple of runs before his recent Salt Lake City show and got the chance to ask him some chairlift questions about life as a ski town musician.

The Ski Journal: First off, where did the name Cousin Curtiss come from?

Cousin Curtiss: When I went to college I had a cousin who was a little older than me. She and her friends used to snag me from the dorm rooms and take me to house parties and make sure I had a guitar in my hand to play music wherever I went. Occasionally, she’d sneak me into a couple of bars as well. After several years of this, I’d been introduced to so many people as, ‘Hi, this is my cousin, Curtiss.’

When I started to play the bars on my own everybody would be like, ‘Hey, who’s playing tonight? Oh, it’s Cousin Curtiss.’

That’s how it stuck.

That’s great, man. How would you describe your musical style?

Lately I’ve been describing it as if blues and bluegrass had a baby, because it’s rooted in blues, but my favorite way to play it is at bluegrass speeds. I just really want to be a high energy performer as one individual, and make people dance—that’s the overall goal.

What attracts you to touring around ski towns?

I think it’s the love that people have for the outdoors and adventure. That demographic—your ski and snowboard culture, your outdoor enthusiasts, climbers, bikers, hikers—seems to enjoy the type of music that I play, and so I just try to go and chase the good times and figure out a way that my job can help sustain that lifestyle. For me, that’s playing music in ski towns like [Salt Lake City], Telluride, and all over the place. You just chase that adventurous spirit. Ski, play music, travel, repeat. 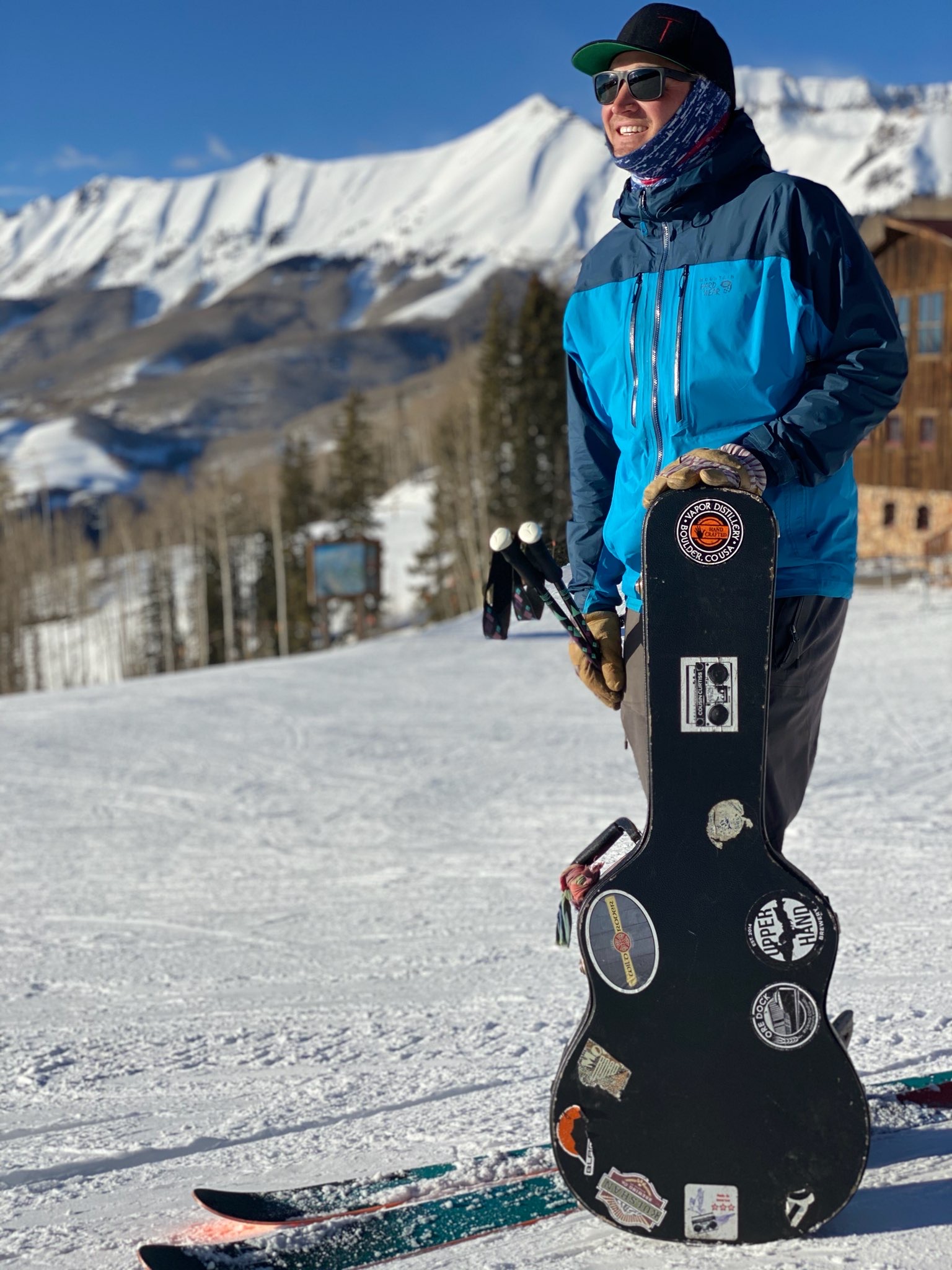 ABOVE Playing après shows at the top of the mountain requires an interesting commute. Photo: Jordan Baron

What do you love about the outdoors, and what do you get up to outside when you’re not making music?

One, getting out to areas where I can find total isolation to clear my mind. Then I can reflect on what’s gone on in the recent past and what’s coming down the line. When I have time to think with a clear mind, I have the most success with writing new material, creating stories, or asking life questions and having time to answer them. That last little bit sounds cliché, but it’s true.

The second part is chasing new adventures and meeting new people along the way. When I’m out traveling on tour or just traveling in general, I try to force myself to meet up with people and say ‘yes’ if they ask, ‘hey, want to go hike this trail, or float this river, or ski this mountain?’

Lastly, when I’m not making music I’m typically with my girlfriend and our dogs skiing and snowshoeing in the winter or hiking and camping in the summer.

How does the ski town music scene differ from other places?

I think you can see it on people’s faces and body language at the end of the day, when they know that they’ve crushed it. They’ve had the best day of their lives on the mountain, doing crazy things, so later that night they are ready to go.

You really seem to thrive off that energy of other skiers in the crowd.

It’s funny, man. The ski culture is one that is willing to travel and experience new things. Always chasing the thrill of life in all regards. And what I’ve noticed playing music for people like that is that you never know who is in the audience, where they live, what crazy stories they have, or their level of influence in the world. I’ve traveled around the world now just because I’ve been playing music in ski towns. Playing in Telluride, specifically, has lead me to some incredible opportunities—Australia, Italy, Costa Rica, Cabo San Lucas. 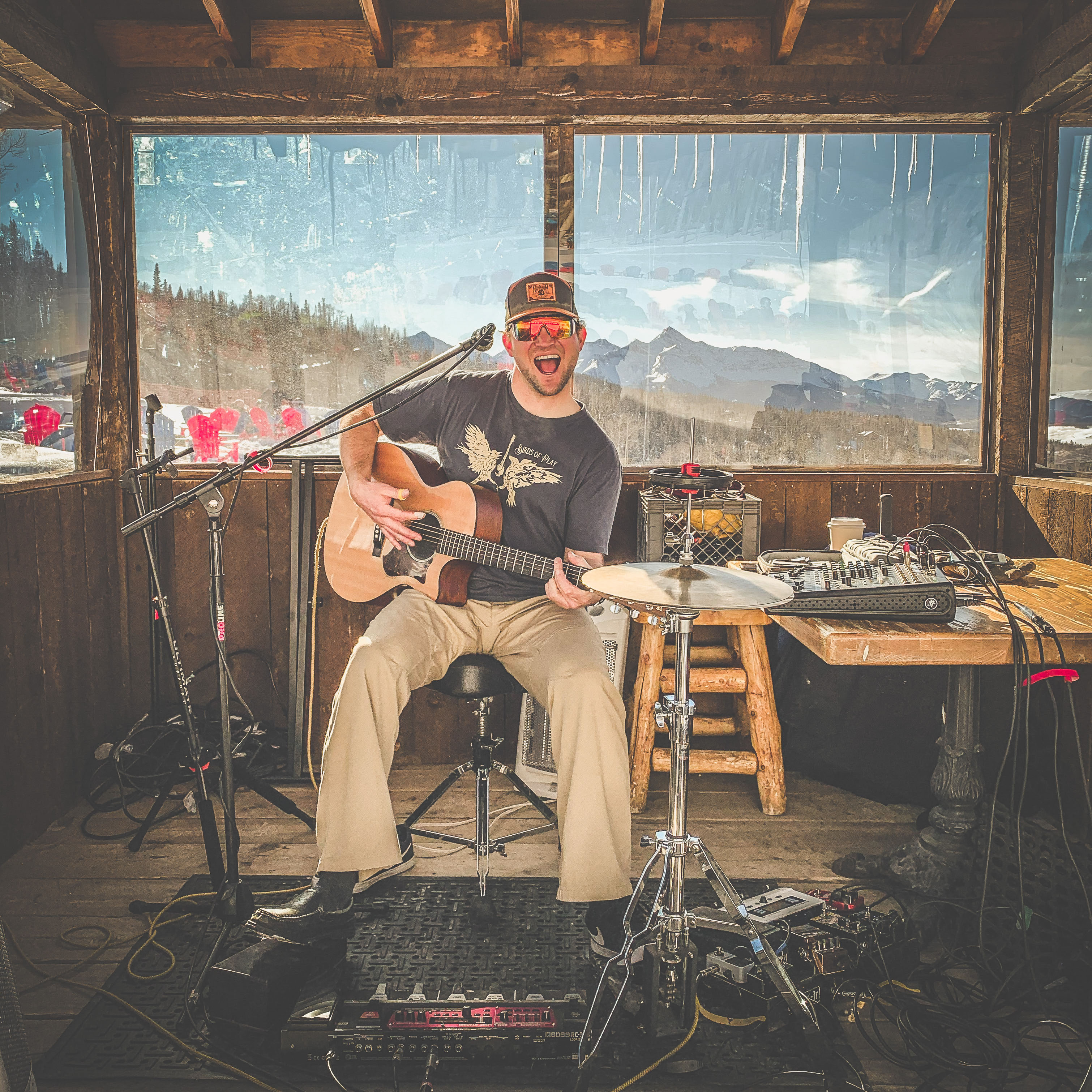 ABOVE Curtiss in his element in Telluride. Photo: Tucker Magid

Wow, man, that’s a good one. I don’t know if I can choose, but I would say right out the gate, Alaska. It’s especially nice in the summertime because the sun doesn’t go down, and people don’t stop dancing and partying. I’ve had some incredible experiences and met some fantastic individuals. Some of my favorite songs that I’ve written are about living in Alaska.

And what’s the favorite place you’ve ever skied?

I’d have to say my favorite place to ski is my home mountain, Telluride. It’s got all the terrain that you could want and even more if you’re willing to hike out and find the sweet spots. It’s also hard to travel to, which keeps the lift lines super minimal most of the season, versus some of the other Colorado mountain towns closer to the Front Range or right off I-70.

How does your life of travel affect your music?

One in the same, honestly. I don’t know if that’s too cliché to say, but when I write songs I look to build a story. So, I’m lyrically driven first, and then I put the music to it. Sometimes I’ll find a riff or something to play and then I’ll write a song to that.

But more often than not, it’s lyrics. It’s the story first, and those stories come from the road. You’ve got to put yourself out there and just listen to what people are saying around you, and don’t put the blinders up, especially when you’re uncomfortable. If you’re in a spot where you’re putting yourself out of your element, that’s the time you’ve got to open up your ears.

You are super high energy up on the stage. How do you stay that high energy?

You know, I think it’s just the way that I’m wired. If you met my brother and sister, and my parents, we’re all very highly motivated once we find what it is that we want to do. If we have a job, we complete that job. I think that I’ve transferred that kind of work ethic into my music—this is my mission. This is why I’m here, to play music and bring smiles to people’s faces. And, when I see somebody smile, that fills me with the energy. When I see somebody dancing, that fills me with more energy, and it just compounds and goes from there.

So, you’ve been all over the country now. How did you decide on Telluride?

Well, if you’ve ever been to Telluride, it’s a pretty easy decision to make once you get there. But honestly it was kind of a chance encounter. I played a show, and the CEO of the mountain was there, the CFO, the VP of Mountain Operations—all these people—and I had no idea. It was in the offseason. And so, I get done and the VP of Culinary Services comes up and says, ‘Who are you? Where are you from? You ought to come back here and play in the wintertime.’

I was playing more music than I’d ever played in my entire life so my chops were getting pretty good. I felt like I was writing better music. Just constant public practice, doing five shows a week. That’s how I ended up in Telluride.

How do you find balance between touring and writing music and just living life?

That one is a really good question. It’s been tough to find that work/life balance. Because you chase the shows, you have to be out on the road to try to push your music, to try to push your name out there. But you have to stop, breathe, and realize that that kind of life is not sustainable. I’m playing about 160 shows a year [around the country].

You have to give yourself pockets of time to reflect on what you’ve just done. Lately, I’ve been writing down phrases and things that people will say that I find unique, and then try to get those into a song.

Build a story, the story is [always] king.