When Tatum Monod burst onto the freeski scene in 2014, the ski world was awaiting her call. After Sammy Carlson, Sean Pettit, and crew had started bringing park skiing prowess into the backcountry, the young Canadian represented a long-awaited link in women’s freeskiing—a double back-flipping big mountain athlete with a playful park style and alpine racing pedigree.

Better yet, she made it all look easy, dropping an award-winning segment in Level 1’s “Less” and then following up with strong performances in the film crew’s next three movies.

But that momentum came to a screeching halt in 2017, when the Banff native suffered a potentially career-ending knee injury while filming in Alaska. The next two years would be a complex array of surgery and intense physical therapy.

And, while the injury itself was hard, reliving it again and again was even tougher. Despite getting back on skis and filming her project “Bad Guys,” last year, people were still fixated on the crash. Finally fed up with the questions, she stopped giving interviews.

“I don’t want the injury to be this defining thing,” she says. “I feel like I’ve been back for a long time.” 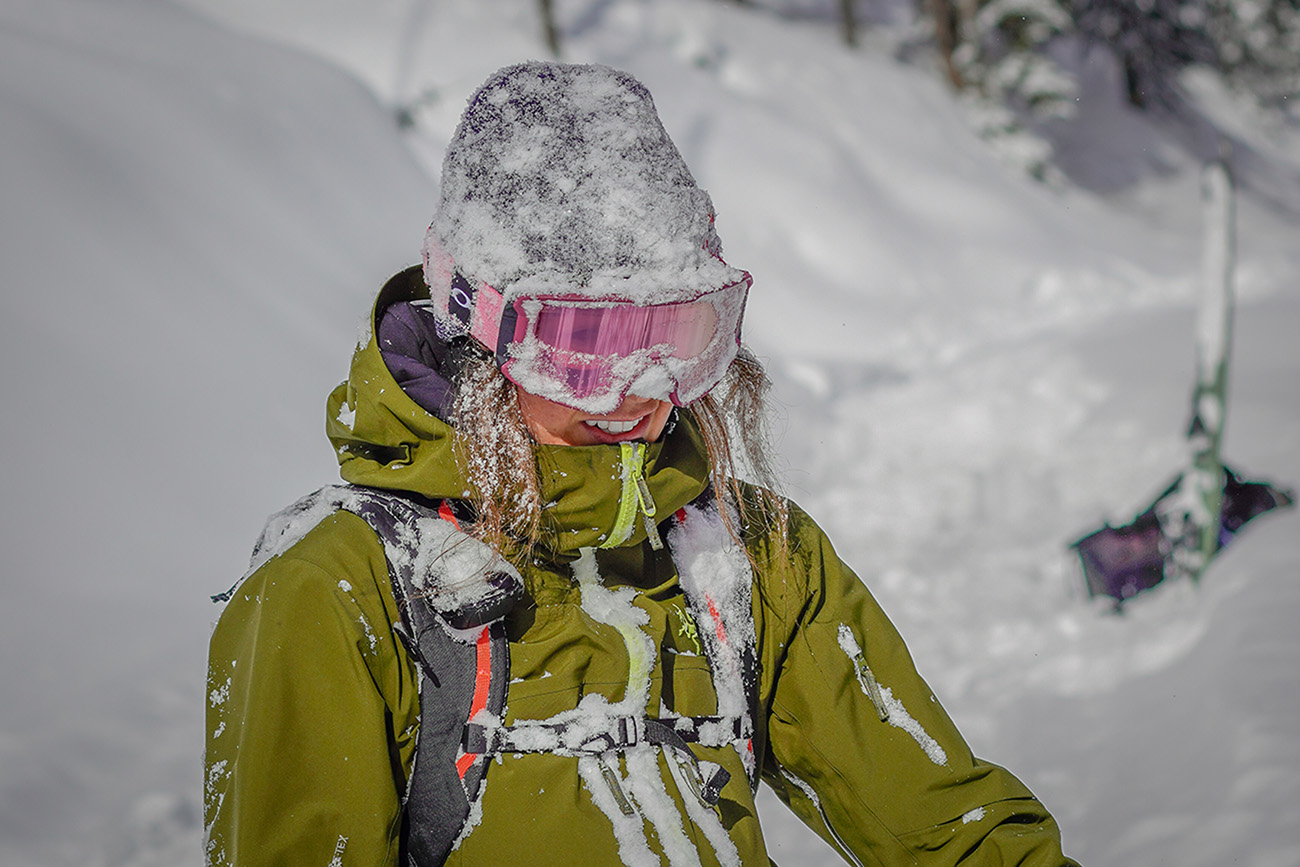 ABOVE After the toughest period of her young career, Tatum Monod is focused on new lines and deep snow. Photo: Billy Stevens

Monod says she has turned the page on her injury chapter. After last year’s “Bad Guys,” she embarked on an ambitious film project with CK9 this season, the same film crew that put out Sammy Carlson’s award-winning film “Over Time.” Now, she has her eyes on new lines.

Yet, as the coronavirus cancelled her season and threw other pro skiers, brands, and the entire industry into a spiral of uncertainty, the 28-year-old has found unexpected wisdom in her time off the snow.

We caught up with Monod from self-quarantine in Pemberton, B.C. to talk about strange times, good skiing, and what’s next for one of freeskiing’s familiar faces.

The Ski Journal: Welcome to the Age of COVID-19. How are you adapting to life without skiing?

Tatum: It’s been alright. I’ve been through injuries before that have made me pour my mind and energy into other things, so it honestly feels similar. It feels like collectively here in Pemby, we all blew our ACLs or something. It feels like we’re all injured and looking to heal.

That’s an interesting way to put it. How have you been holding up through it all?

I have been keeping busy. I would obviously way rather be out skiing and filming and working on my project, but for everybody to have to step back and take five—like really not be on our normal action-oriented routine—it’s kind of a nice reset of reality.

Personally, it’s made me reflect on how lucky we are to do what we do, and how when that’s taken away, it opens your eyes.

How are you staying busy off the snow?

I’ve definitely always been somebody who doesn’t need to go, go, go. I like hitting it super hard in the winter, but I could also chill. I’m a bit of a homebody to begin with, I always have little projects to go along with my skiing.

I went to fashion design school for two years in Utah. I learned how to sew and construct clothing and garments, so I’ve been diving back into that, which has been really fun. That’s definitely something I want to pursue outside of skiing eventually. Whether that’s designing technical apparel or lifestyle stuff. I have multiple sewing projects on the side right now.

I bake pies. Ha, I sound like friggin’ Martha Stewart. I’ve been fly-fishing a lot and getting outside, but keeping it real mellow.

Do you think your time away from skiing helped prepare you for this unexpected down time?

When something so big comes about, a moment that prolific happens in your life or career, it just makes me so much more grateful for everything. I think it’s really relatable right now for all of us.

You sound positive now, but did an injury like that make you think about your ski career? How were you feeling about it then?

For two years, I was in such bad pain that I had to be on pain killers every day I was skiing. I didn’t know if I could get back to where I was before. That was just this big anxiety-ridden question mark.

But remembering to be patient and just living for those little achievements is what helped me the most. Once I figured that out, I couldn’t rush it. I started going out with friends in the mountains and just being grateful for that and not the moments that I landed a double backflip or progressed my skiing.

Those were moments I used to live for, so I had to switch my mindset to enjoying being out there in the sun, hitting the skin track—those little things. That’s what helped get me back. 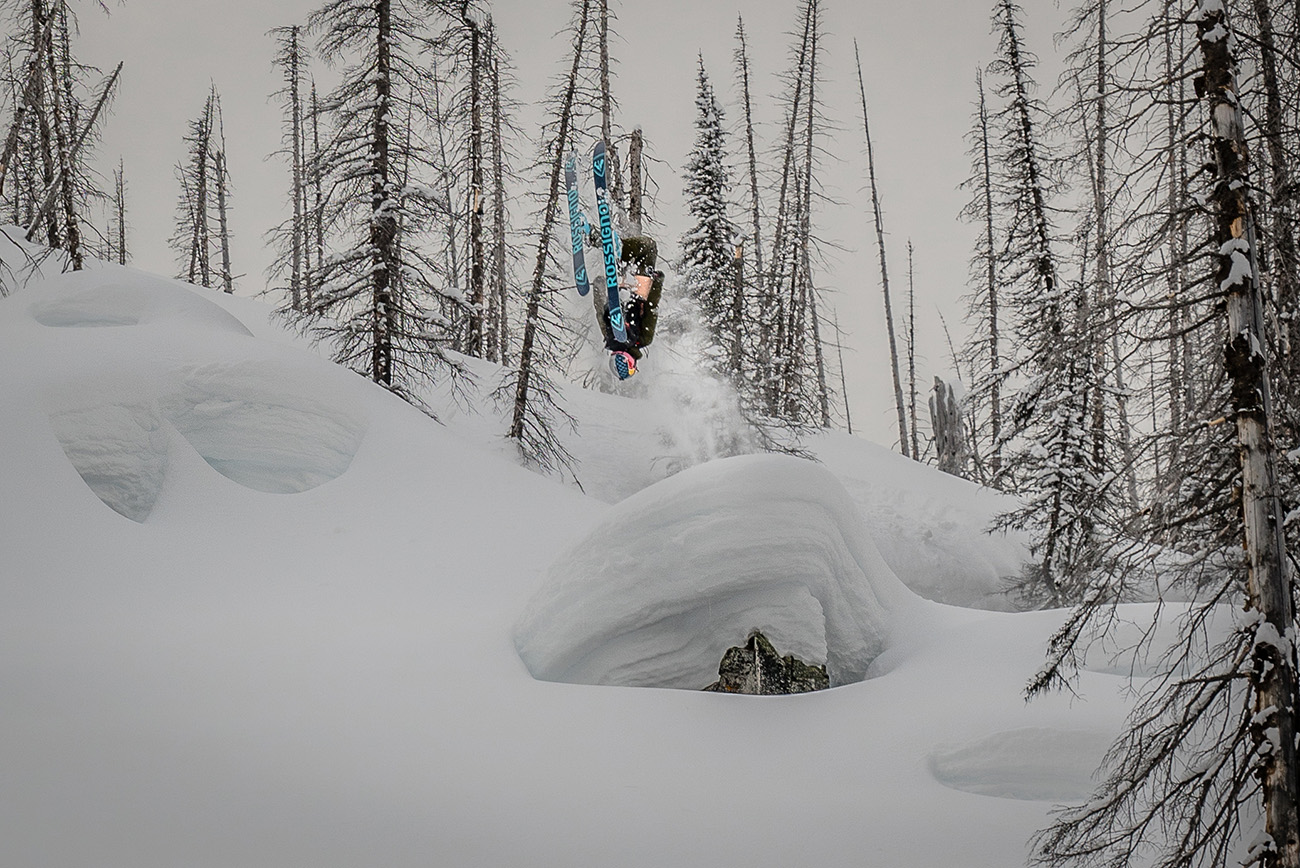 ABOVE All the wiser, Monod still likes to get upside down. Photo: Billy Stevens

How do you think your skiing has evolved through all this?

I think I’ve learned so much. I look back on my Level 1 days and I was shredding hard and skiing well, but I didn’t know shit. I was so young.

Now I just bring a whole new level of experience into the mountains. I don’t think I’m old enough to have that gritty mountain wisdom, but I have more experience, I’m safer, and my decision-making is just so much different than back in 2014. I’m a whole new skier in that regard.

What’s going on with your newest project?

This season I was working on a short movie with CK9, the guys out of Nelson. It’s all on hold now. I’ll have to pick it up when this is all settled.

It was going to be very action-based, but also have a wicked storyline to it. Skiing is in my blood there are just all these different chapters of my career and life. I’m revisiting my grandfather [John]’s footsteps in Chamonix, France because he was a Swiss mountain guide over there in the ‘50s. I was actually a week out from heading to Cham before they started cancelling international flights [due to COVID-19].

Now, it’s a two-year thing. I’m hoping it’ll give us an opportunity to actually dive a bit deeper with it.

Your family taught you a lot about skiing, but do you think this ski project is actually teaching you about your family?

Definitely, I have already learned so much about my [late] grandfather just from digging into the archives, going into museums, finding old articles and photos, and talking to some of his old friends. I’m learning who he was as a person and how much he loved and lived for skiing. That was his life, that’s how he played.

My dad and uncles were ski racers on the Canadian Ski Team, so we all share that common bond. It’s a very powerful connection. It makes me believe even more that that’s why I love the mountains the way I do.