First published in issue 16.1 of The Ski Journal.

Zigzagging along the eastern ridge of Store Kvittind in Norway’s Lofoten Islands, rock-hard granite and the Atlantic Ocean meet in abrupt beauty. It’s otherworldly and spectacular, cloaked in a vast white canvas. At the very least, the eye candy is enough to offset our leg-burning ascent.

After a long, cold winter, springtime arrived overnight in the Arctic. A few days ago, now in May, it was still frigid in this far-reaching archipelago, with powder skiing down to the ocean. Now it’s 50 degrees Fahrenheit, and we’ve gone from checking avalanche beacons and testing for windslabs to looking out for wet slides and the leg-chattering melt-freeze effect.

Chad Sayers leads our pack upward as David Kantermo, Anna Segal and filmer Elias Lundh follow close behind. It’s my third ski trip to Lofoten, but the first one that is fully human-powered. I was here with the Norwegian film company Field Productions many years ago, but flying up above, capturing most of the action from a helicopter.  Now I’m here in it, part of a group of friends exploring the island chain’s cinematic grandeur on foot. 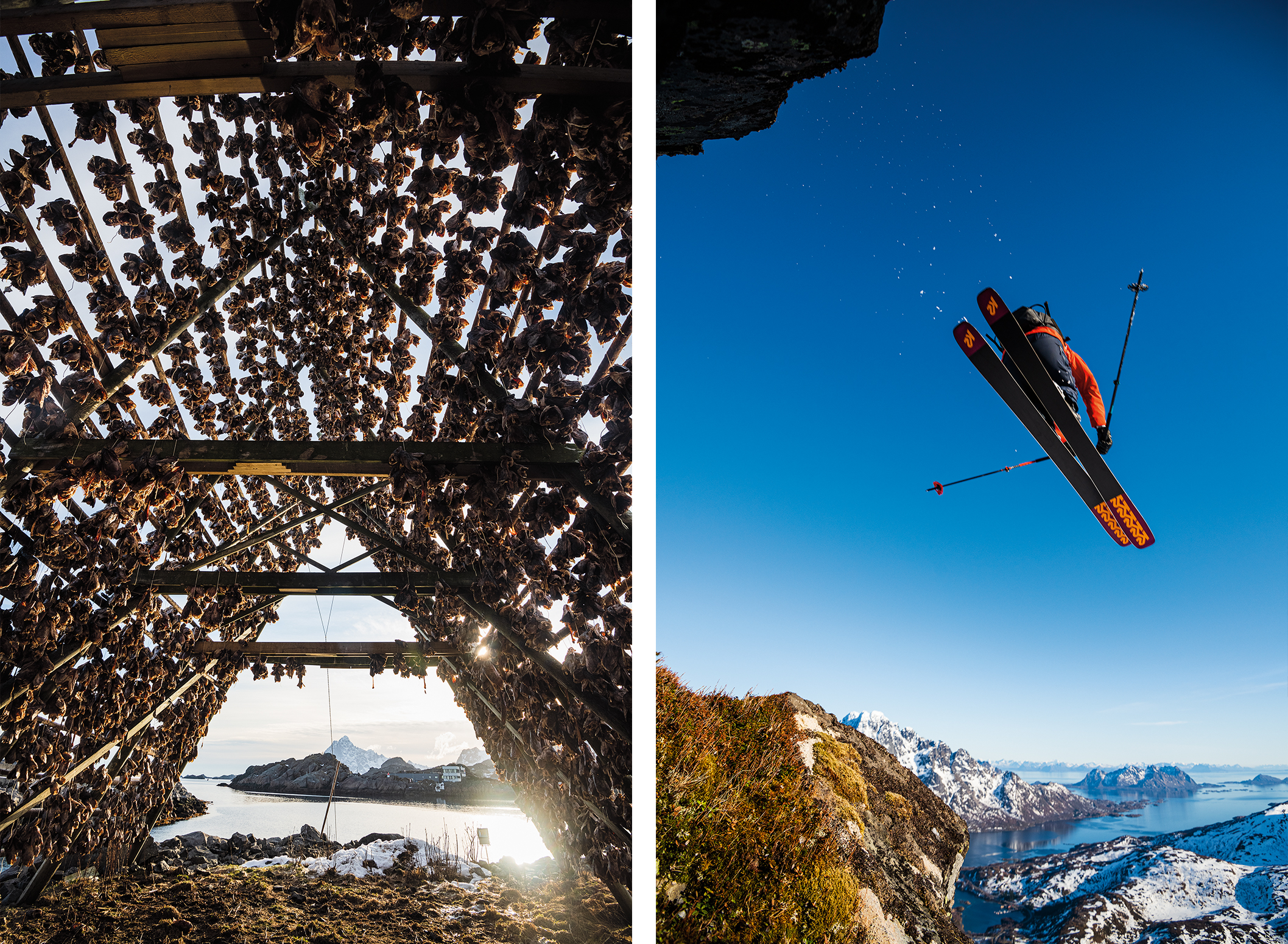 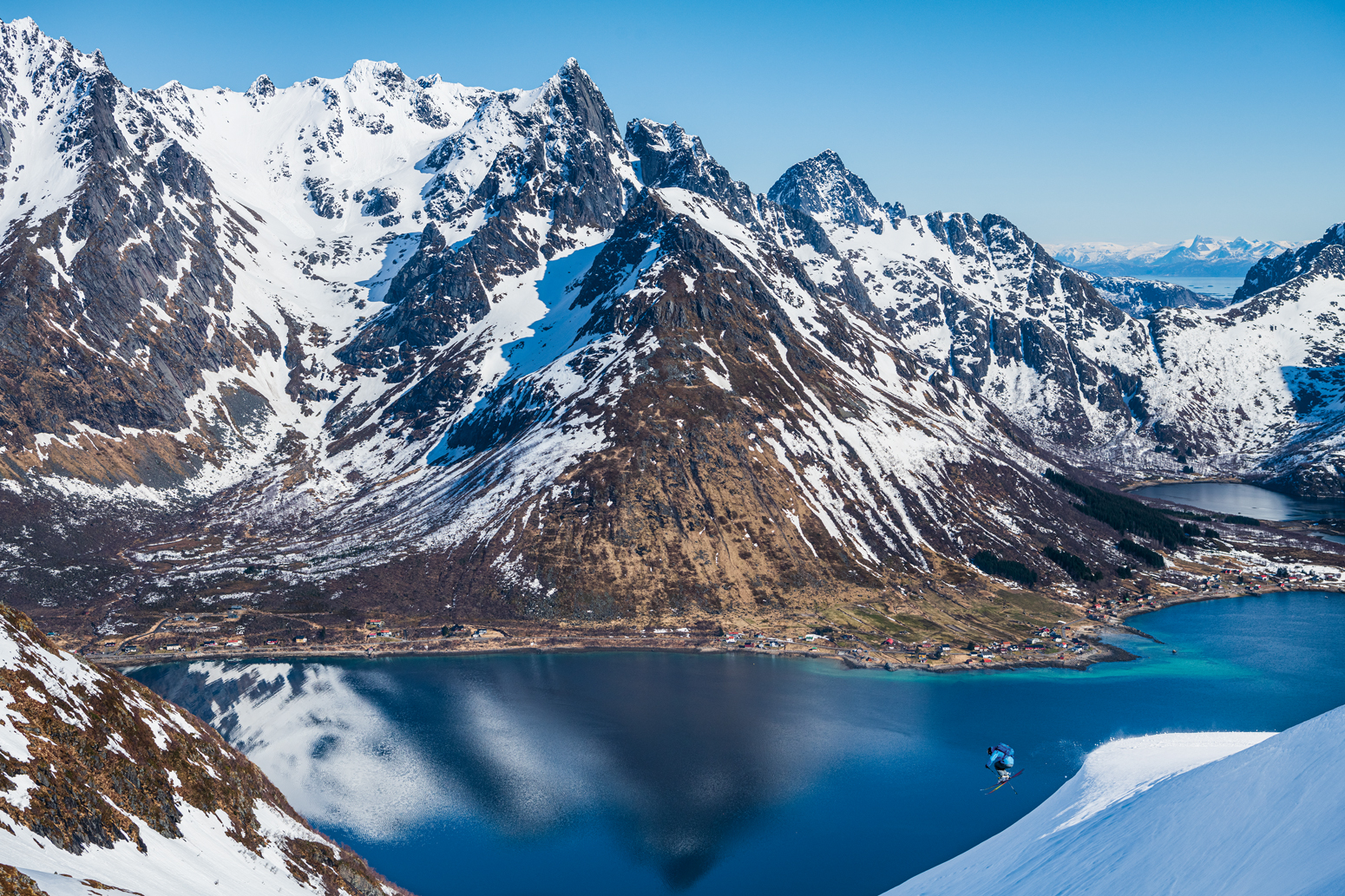 clockwise from top left
All things must dry—even cod. Fishing was once the island chain’s biggest industry, and many residents in Lofoten towns like Svolvær still use traditional fishing and harvesting methods.

With no heliskiing operations on the island, Anna Segal was one of the few humans taking flight in Loftoten’s mountains.

From ski to sea. David Kantermo jumps straight toward the fjord as Geitgallien looks on.

Lofoten’s string of islands rests off the northwestern coast of Norway and is home to early settlements above the Arctic Circle. More than 6,000 years ago, Stone Age people came here to hunt and fish, crossing ice bridges to gorge on the islands’ rich maritime bounty. But even though fishing remains a vital industry millennia later, economic momentum has shifted heavily in the 21st century. Tourism is now one of the faraway land’s biggest breadwinners, and during the last decade, the popularity of the area has gone viral. On the 68th parallel north, Lofoten’s ever-lasting summer light is a huge part of that draw. Winters are cold and dark, but when spring comes, dedicated adventurers from across the globe make the trip to Lofoten for a unique ski experience.

The mountain massif on Lofoten is often called the Lofotveggen, which translates to the “Lofoten Wall.” From a distance it’s easy to see why—it’s a solid barrier blocking the horizon. The range is a part of Skanderna, the central mountain range in Scandinavia. Lofoten’s part of the chain measures only 60 miles long and tops out at 3,760 feet, but wild and craggy mountains end right at the seashore, making it a ski-touring paradise. The mountains were built by volcanic activity that predates the formation of northern Europe—pressed, heated and pushed up over three billion years ago.

Scientists believe the mountains on Lofoten were carved out by glaciers during the Ice Age, leaving behind tilted pitches of solid granite. Yet even if the mountains are steep, they often start gently at a beach or meadow near the islands’ few roads, providing good access for uphill travelers. 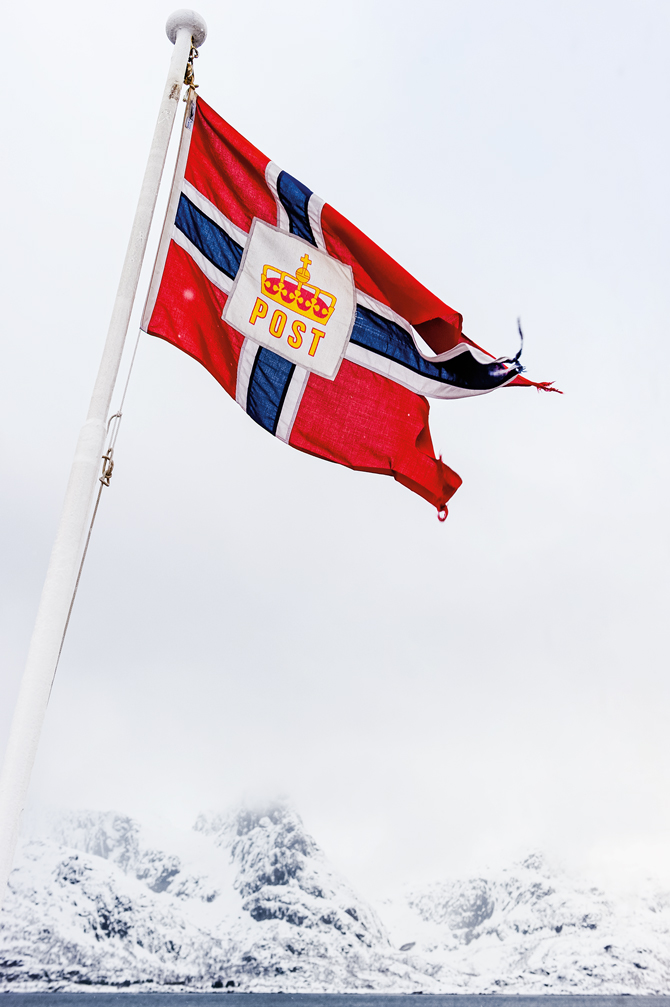 The postal flag of Norway, often found in houses over 80 years old, on one of the island chain’s many cloudy mornings.

Thirty minutes after starting up Store Kvittind, we rip skins on a small summit ridge. Peaks adorn our 360-degree view but it’s the water that leaves us speechless. The evening light shines on Store’s east face as a fjord stretches out below, pointing its winding finger toward the ocean beyond.

It’s well after 8 p.m. when we aim toward the sea. The snow is creamy and it feels like cutting a hot knife through soft butter with each turn. Dropping down a steep pitch leading into an open bowl, giant snow crystals spray from Sayers and Segal’s ski tails ahead of me, igniting in the late-day glow. I work my way farther right to get a clean line, and the scent of the sea starts to take over. We are back down by our vehicles 20 minutes later, just as the sun dips behind the mountains. It’s the kind of run that can keep a person coming back year after year, and we cheers our good luck before heading to town. 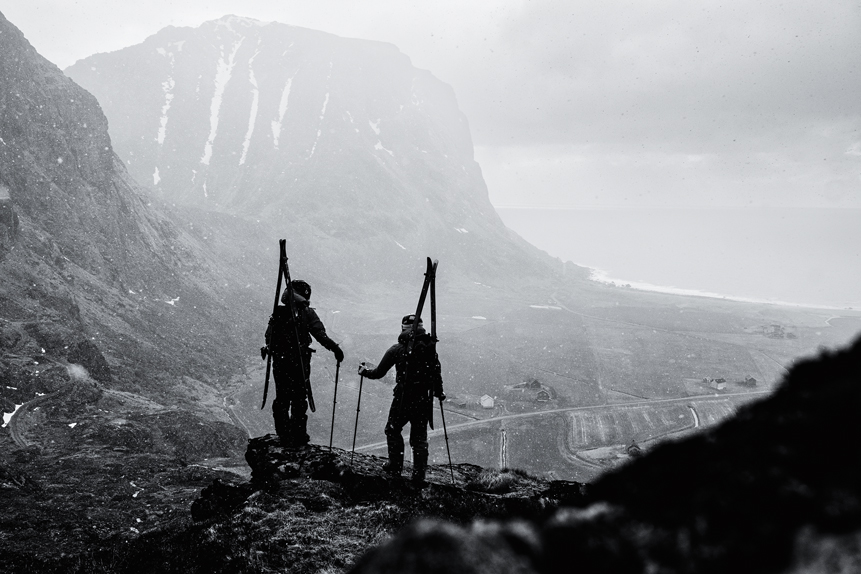 clockwise from top left
Chad Sayers suited up at Unstad, Lofoten Islands’ most consistent surf spot, and a wave worth the frigid price of admission.

A local surf Viking claims his wave at Unstad. The well-known spot works best when the water is at its coldest (November through March), but can see rideable waves year-round.

From winter to summer and back again, Anna Segal and Chad Sayers pack it out over Uttakleiv, one of Lofoten Islands’ most beautiful beaches.

Seth Hobby has lived more than his fair share of Lofoten magic. The mountain guide grew up near Seattle, developing a climbing addiction he would ultimately pursue around the world. After an expedition to Nepal, he went to Thailand, where he met Maren Eek Bistrup, a charismatic Norwegian. Hobby followed his heart (and Eek Bistrup) to Norway in 2007. After a few years in the south, the couple got married and decided to move to the Lofoten Islands, where they landed in Kabelvåg, a small fishing village with less than 2,000 year-round inhabitants.

Shortly after, they realized there was a demand for guided ski touring and a lack of local guides in the area. They started Northern Alpine Guides in 2012, and the company has been growing ever since. They employ 10 to 12 guides during the three-month ski season and own and operate Lofoten Ski Lodge, offering guided ski-and-stay packages through Nyvågar Rorburhotel, a cozy lodge right by the sea on the outskirts of Kabelvåg. 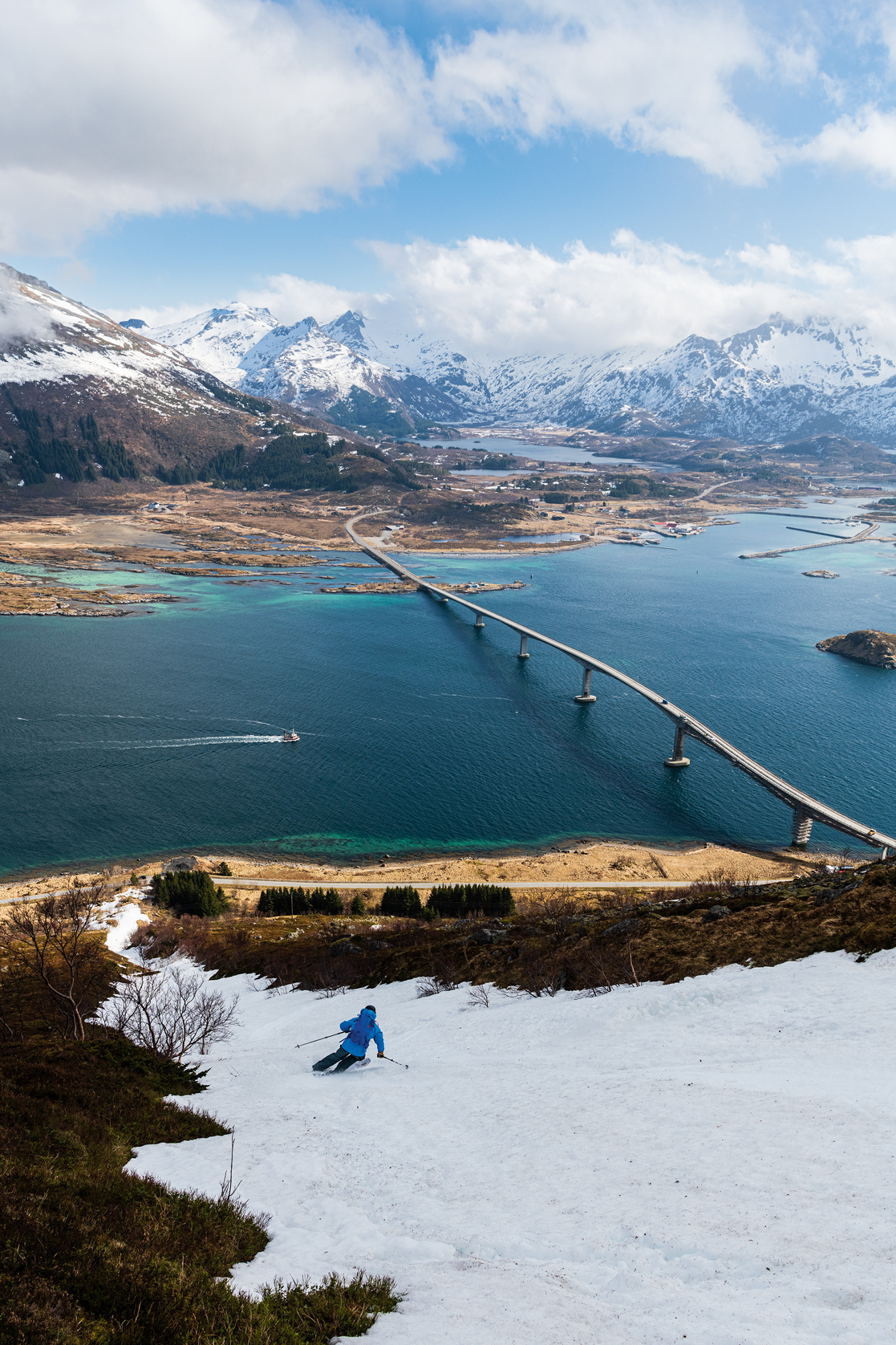 While planes and boats offer connection to the outside world, some of the islands on the archipelago are connected via bridge. David Kantermo finds a snow strip toward Sundklakkstraumen bridge, which links the islands of Gimsøya and Vestvågøya.

Lofoten Ski Lodge represents the international appeal of this rural paradise. Half the guide crew is American, and most of the other guides are foreigners too. Same with the guests. The reputation of ski touring here has spread far beyond Lofoten’s frozen shores.

When I arrived here more than 10 years ago, I remember meeting the odd foreign ski-touring crew, but they were few and far between. Lofoten was different back then; less busy but also less accessible and not so tourist-friendly. I am sure some locals are not always happy with the progression and, of course, like in any popular tourist destination, it can be frustrating during the high season. Hobby has been a part of that transition, a foreigner who has made this place home. 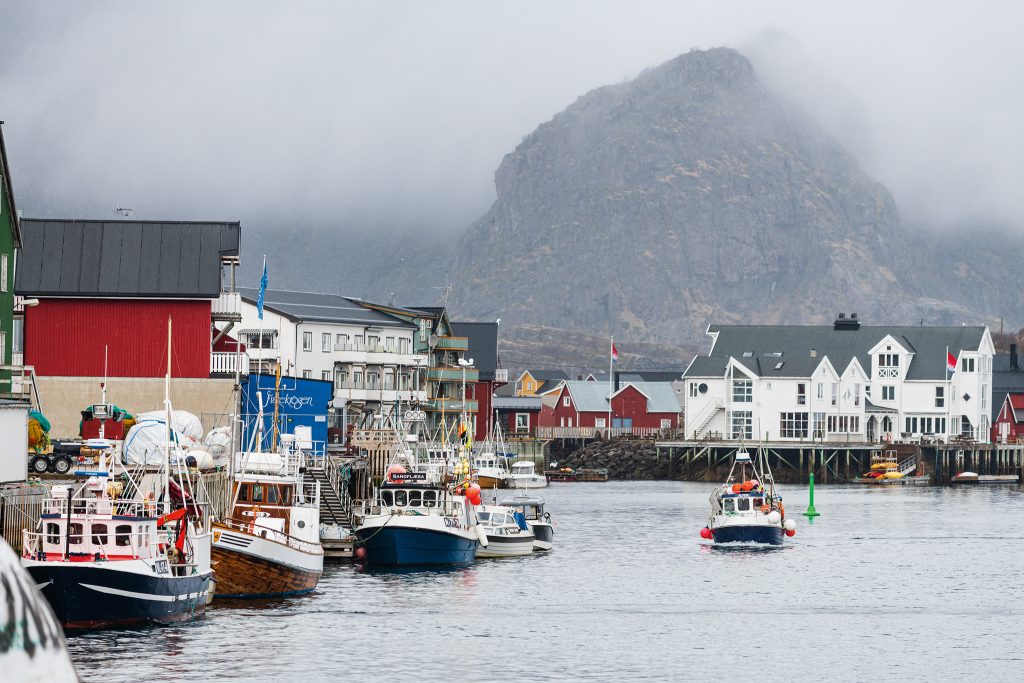 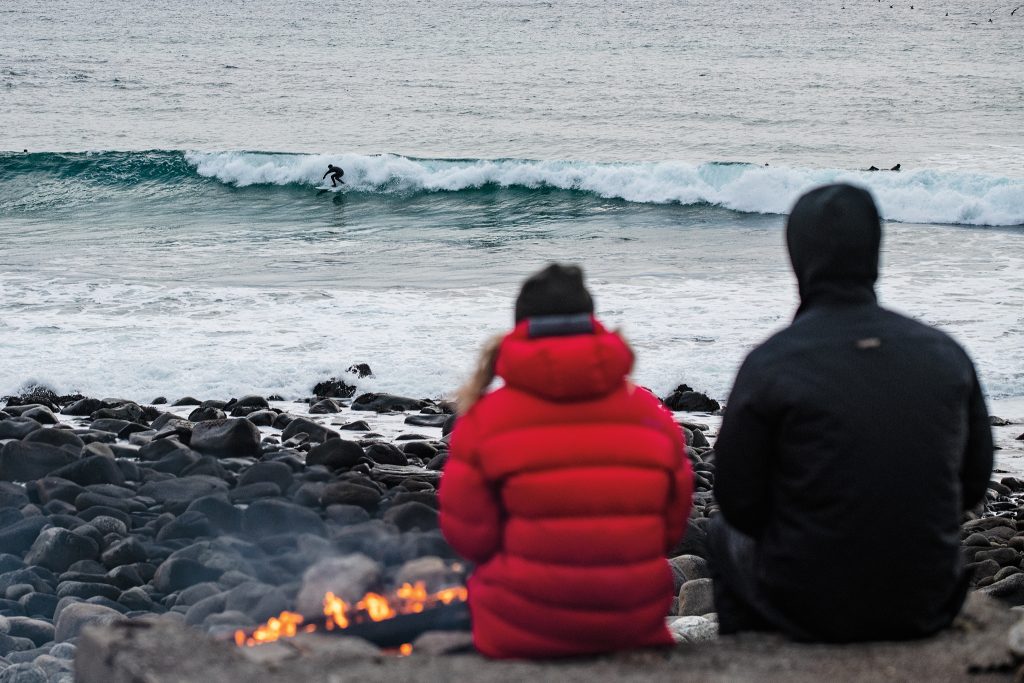 top to bottom
Henningsvær is still a viable economic center for fish farming, a practice that has been a part of Lofoten culture for nearly 1,000 years.

Anna Segal and David Kantermo look on as an unidentified surfer rides the right at Unstad.

I can see why Hobby found his way here. I can also see why he never left. There are so many mountains to choose from and so much nature to explore between so few people, making the rush to be anywhere almost nonexistent.

Much of the time it’s not the crowds, but the weather itself that makes the final call in these climes. After our successful ski off Store Kvittind, a light rain and low clouds have us thinking about everything but skiing. But they so often are in the islands, winter squalls are on the horizon. Generations of Lofoten inhabitants have learned to live and thrive in this ebb and flow, a way of life that requires time and commitment, but more often than not rewards patience. We settle in, happy to ride out the storm. 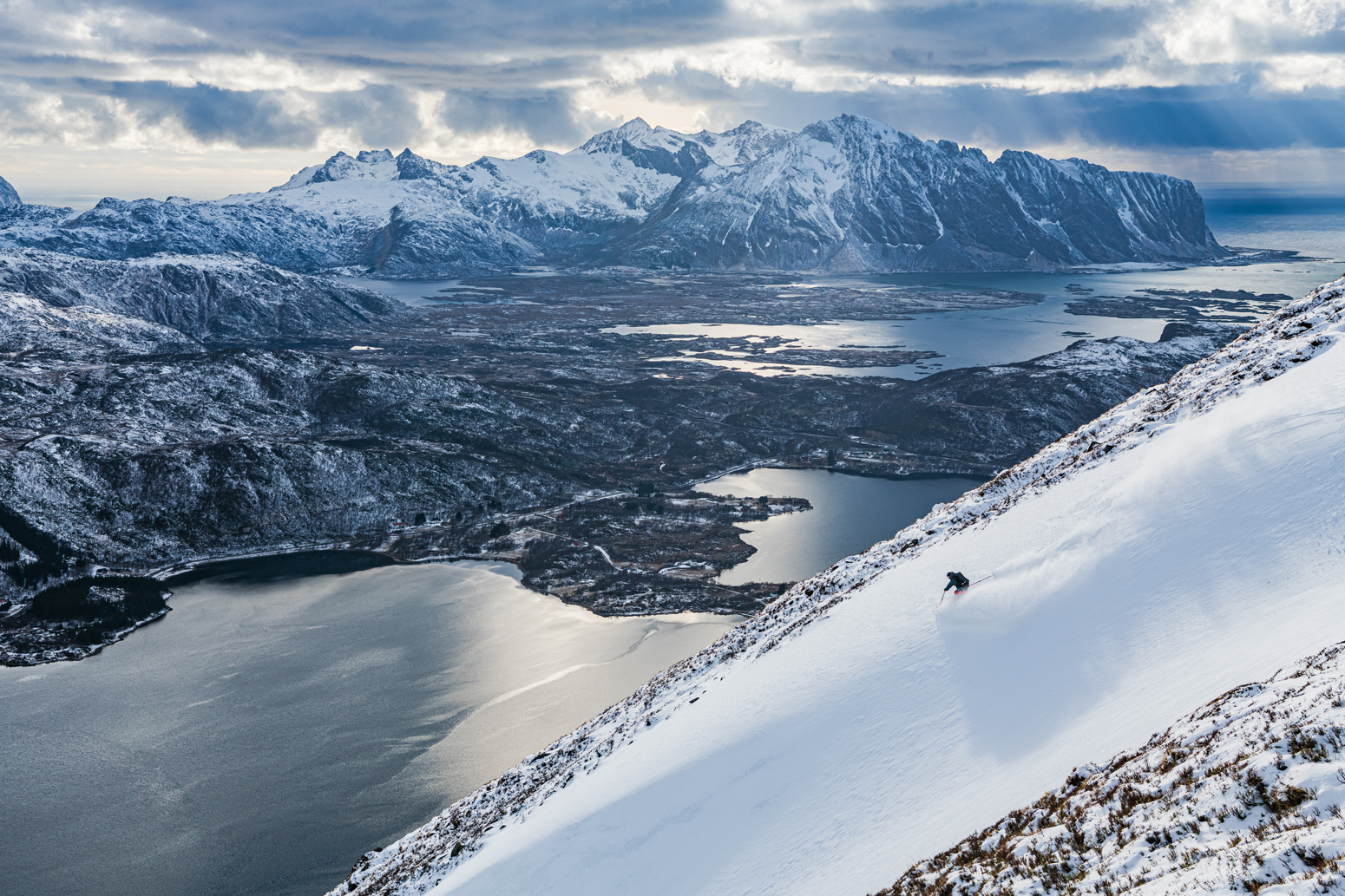 above Chad Sayers skis to the source off Haveren (2,651 feet). The seldom-skied peak on the island of Vestvågøya provided a glimpse of winter after days of warm weather. 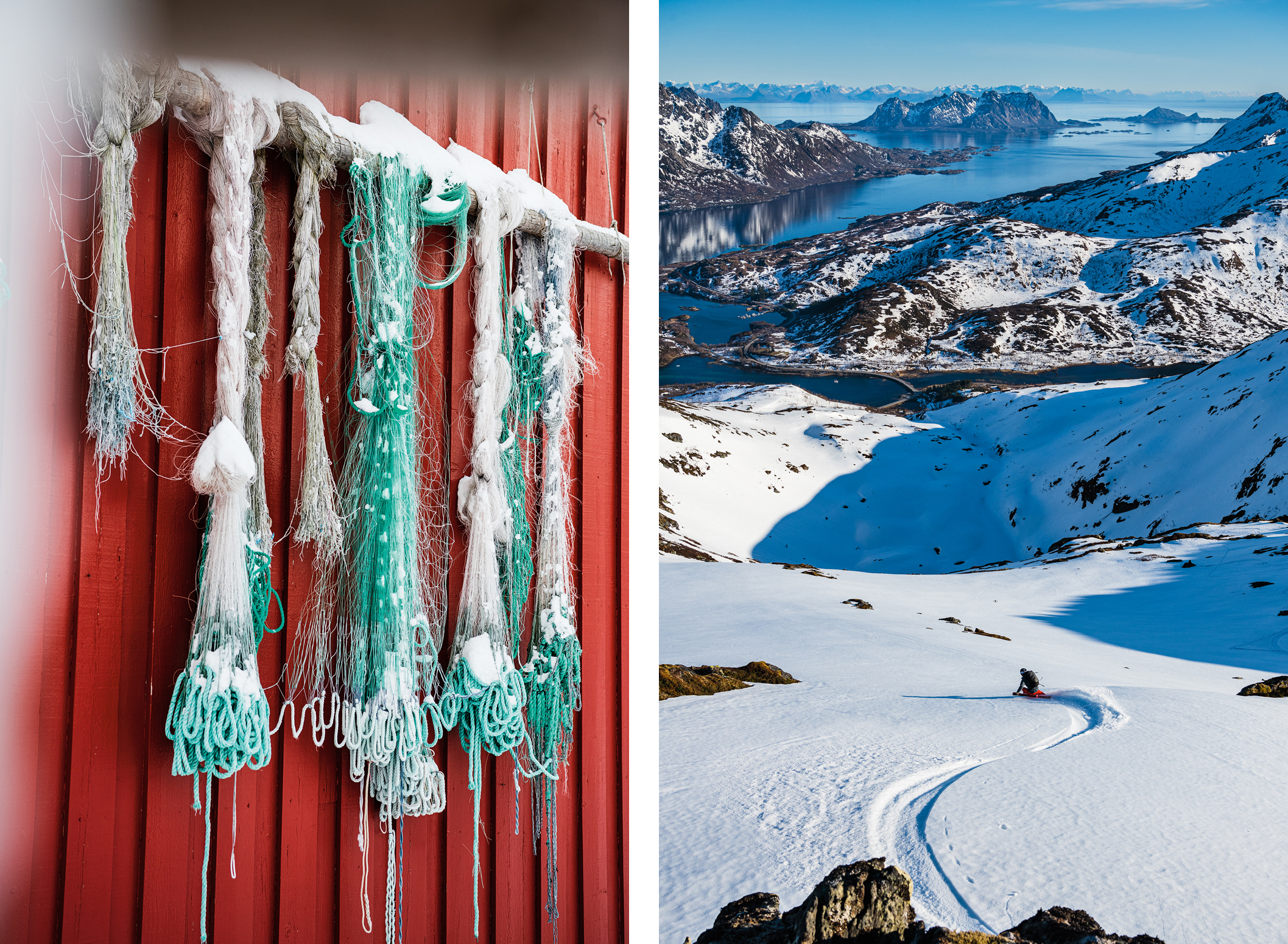 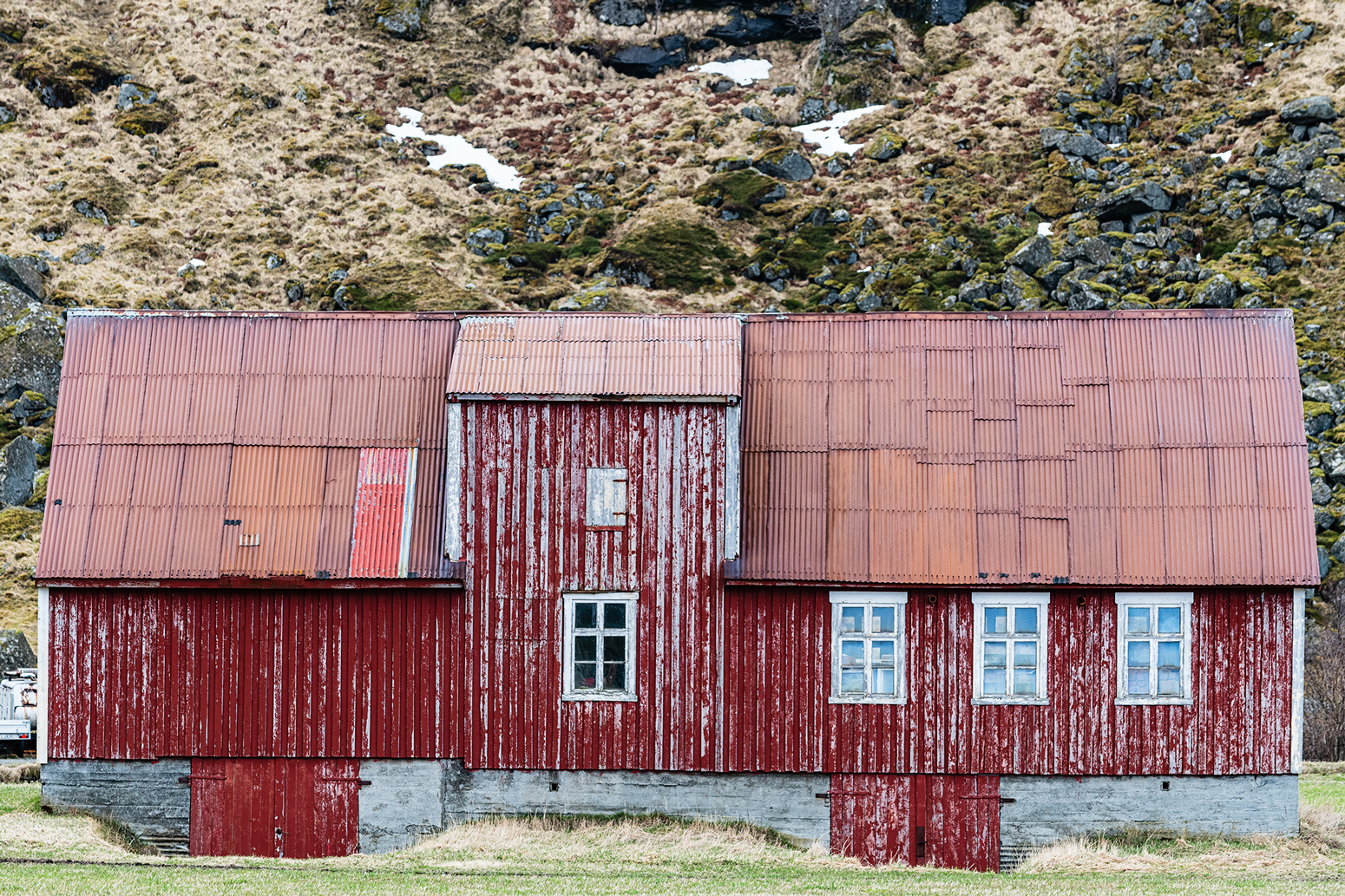 clockwise from top left
Fishing past meets tourism future. The remnants of fishing rope hang outside of the Lofoten Ski Lodge in Kabelvåg.

Well after 8 p.m., Chad Sayers heads toward the fjord off the top of Store Kvittind, and the promise of a hearty dinner in town.

If this place could talk. A farmhouse at Uttakleiv stands the test of time and weather deep within the Arctic Circle.