“The first day of shooting with Julian Carr in what would be one of the deepest storms I had experienced on the West slope of the Tetons in early March 2018–more than 59 inches of snow would fall in the next couple of days. The conditions couldn't have been more stacked for the big air master. Julian went through the motions of sizing up the cliff, checking the landings and went into a zen-like mental state to prepare himself for the air. The jump has quite a bit of curve to the takeoff, so he wanted to try one of his signature front-flip layouts, which he executed in perfect form.” Photo: Greg Von Doersten

A huck differs from any other form of gravity-defying travel. A flawless Hugo Harrison stomp in the middle of an Alaskan line or a Bobby Brown’ed switch double 1440 over a 120-foot table top are by no means hucks. A huck is more of an emotional relationship with gravity. Whether it’s a Seth Morrison hate huck that utilizes a hundred-foot backflip to tamper down some skin crawling inner demons, or a Julian Carr meditative method to zen out upside down off a two-hundred foot Wasatch wall, the huck is more a therapist couch in the air than a performance piece on snow. It is a middle finger to the law, a spiritual connection to the earth, wind and fire inside, a prayer to the gods all wrapped up in a few seconds of flight. A huck is huck for huck’s sake.

The first time I found that aerial therapist couch was off an iconic rock in Squaw Valley, CA called Adrenaline Rock. It was a 50-foot to dead flat testing piece for every hormonally charged teenager and wannabe pro skier. The icons of Squallywood hucking—Shane McConkey, the Gaffney brothers, John Tremann, Jeffrey Taggart Holmes, Jeff Engerbretson, Jeff McKittrick, all the Jeffs—had jumped it. They howled with laughter as they hot-tubbed into the landing and made it look like nothing could be more fun. Without their lead, the overhanging granite behemoth would’ve seemed impossible to me. 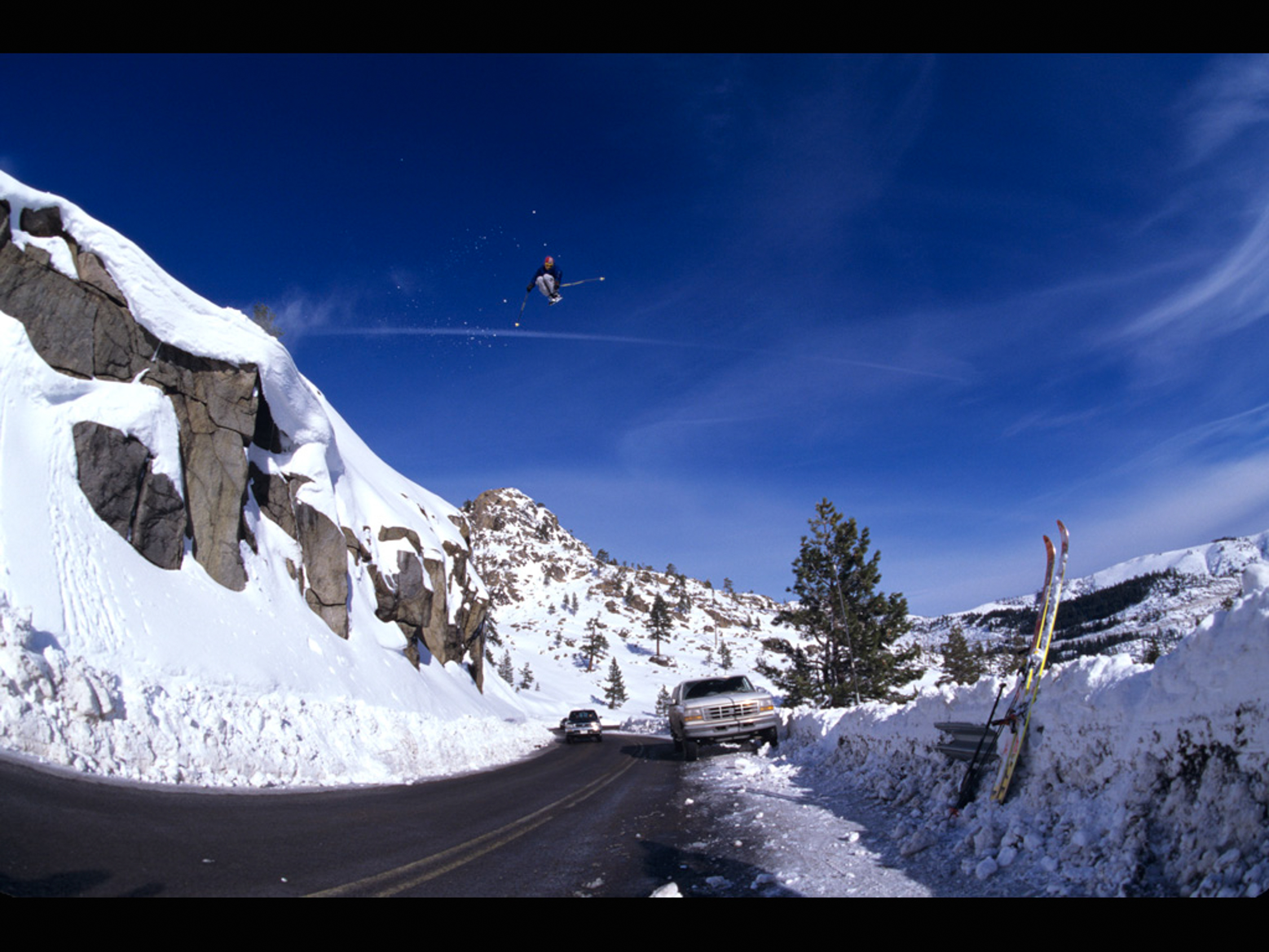 ABOVE We had been shooting this road gap for awhile that day. Kent Kreitler decided to hit this one. A zen master of the huck. His style so relaxed and concentrated, so quiet in the air, then a big stomp. Photo: Hank de Vré

On that fateful day I chose to jump Adrenaline, 13-year-old me, made the most meticulous downslope side steps of my life to the edge. I peeked over the precipice. A rush of supercharged adrenaline, dopamine and serotonin hit me as I summoned the courage to push over and let gravity’s hold take charge. I don’t think the ceaseless clicking of the second hand on my watch actually slowed, but I swear if I checked the time during the plummet, I would’ve thought my watch had run out of batteries. A novella’s length dialogue with myself raced through my head. As my body tensed to prepare for landing, I threw my feet to the side and prepared for what every preternatural instinct told me: I was about to splat and die. Luckily the three feet of fresh powder rapidly slowed the descent. It still hurt; it felt like being in a fender bender, but it didn’t matter. Between the point where my back was telling my brain about the unnatural impact it just took, I began screaming with the kind of joy that would make a slightly overweight and unconfident teenage boy scream like a six-year old girl with a new pony.

above left to right (click to enlarge)
John Treeman flying tight over Adrenalin Rock, Squaw Valley. John was one of the firsts athletes I got to work with. His determination and hard work made him one of the best all-time huckers and talented skiers. He loved to go big and had unique style getting tight in the air, holding it to send it further with style. Photo: Hank de Vré

This shot was taken off the Granite Chief lift at Squaw Valley. I had a great day with Chuck Patterson and my nephew, Ian, who was visiting from Idaho. Ian was in his early 20’s and was stoked to go out with Chuck. I think they inspired each other. Chuck is a pro at the Art of the Huck. There are lots of jumps not possible without understanding how to properly and safely stuff the landing. This particular jump was visually stunning but to flat with no room for its 60 m.p.h. runout. I’m not sure either would have done it without the other there for inspiration. But Chuck picked a good soft spot to land and nailed it perfectly. I told Chuck that getting snow moving would make the shot and he, being the ultimate pro, got snow moving, waited for it, and timed the jump perfectly. It’s great to know how to huck, but also great to know how to make a great image. Chuck is a pro. Photo: Jeff Engerbretson

It was then that I realized nothing mattered at that point in my life but figuring out a way to do that again—for the rest of my life. A path carved by the people that had all, at one point, hucked Adrenaline. A path that made Adrenaline Rock the guidance counselor I never knew I needed.

Sometimes, when getting back in touch with those teenage years, when ski heroes were everything, I open up a file buried deep within my computer titled, “Buddy’s Folder.” It’s a teenage boy’s poster-covered wall for the digital age. Inside, images of Bryce Phillips pointing to his lone track off a 90-foot cliff in Engelberg, Switzerland, is saved. A photo of Will Burks laying out a backflip over a 100-foot road gap with a casualness of a sipping a mimosa at Sunday morning brunch stands out. An old cover of Powder with Jeff Holden falling off a 150-foot cliff in Alaska harken back to an age when hucking was more important than a powder turn at Alta. What’s missing is the realization that none of what my “Buddies” were doing at the time was anything new. That moment occurred the first time Craig Beck’s 70s-era Daydreams played in my VHS deck and when I realized why the 160-foot buttress of rock on the Palisades is called Beck’s Rocks. Named not as a tribute to an icon of skiing, but because the crazy bastard on 210cm World Cup GS skis decided to jumped off it in the 70s.

ABOVE I was working with Scott Gaffney productions up on Donner Summit. We had the perfect little knoll to set up for this straight on shot. The face was untouched. Dr. Robb Gaffney sent it off the top in his smooth casual style, hanging the air, then stomping the landing. He made it look effortless. Photo: Hank de Vré

The art of the huck isn’t some recent fad, even though anyone under 20 might think @SendItOfficial started the trend that causes Buffalo Bills fans to air into picnic tables and ill-prepared, bikini-clad sorority girls to try their hand at the bike ramp in the lake.

The history of skiing says Chinese hunters and Norwegian warriors first used skis for utilitarian purposes—hunting and rescuing kings. I like to imagine they too figured out a way to send a creek embankment or hop from the top of their thatched roof hut. In my opinion, the second step in skiing after the turn had to be the huck. For there is one thing my ski life has taught me: when you do something new, someone probably did it before you.

above left to right (click to enlarge)
This day was deep, probably the best one we had during the time Julian Carr spent in Engelberg. He talked in the morning about hitting a big cliff and I tried to understand what takeoff he was talking about as we were riding the lift below it. I had the general idea so I picked my angle hoping I understood right. When we got the drop in call I remember seeing this huge waterfall of sluff but no Julian. Apparently it took a bit of time to get in and that was good, as the first sluff was so big that it almost covered his takeoff and most of my frame. When he came shooting out from the takeoff, the sluff had slowed down (though it was still enormous) and he did the biggest front flip recorded at that time, maybe even still today. Photo: Oskar Enander

They don’t call him Jamie P-AIR for nothing. This was a day Jamie, Jenn Berg, and I were tinkering around Alta looking for some shots instead of heading out of bounds and Jamie eyeballed this air in Glory Hole. He did it a few times. He just booted back up to it, it was nothing to him, it always blew my mind how nonchalant he was about everything he did that was simply outrageous to almost every other human being on the planet. To Jamie sending a 50 footer was the same as kids having a casual catch with a baseball. Photo: Lee Cohen

The accompanying gallery is a tribute to the second most important progression in skiing. These are the images that make you question the sanity of grown adults while also intriguing you enough to make the devil on your shoulder say, “You should try that.” The soul of skiing is found in the moments of blissful hang time, where your brain churns through thoughts faster than a super computer, where mind, body and space unite and when nothing matters, and everything makes sense. Or perhaps that’s reading into it a little bit much. Perhaps hucking is just damn good fun.

ABOVE On Seth Morrison’s first day of shooting on this trip in Haines, AK, we picked out a mellow zone to assess the snow and make sure stability was good, and all pulled out our big lenses anticipating some tightly framed pow shots. Seth said that he would make a few turns and hit this diving board below him. He proceeded to turn the diving board into a 60-foot front flip and we were all caught off guard and were way too tightly zoomed to capture the immensity of the air. We asked him to let us know the next time he was going to go huge so we could shoot it appropriately, to which he calmly replied, “Well, I said I was hitting a diving board”. The next time he went huge, I was more prepared, and got this shot. Photo: Chris Bezamat

ABOVE I was out shooting some skiing that day at Squaw Valley. We were working our way down, and I skied around the bottom of Adrenalin Rock and looked up. To my surprise, Shane McConkey was posted up there. Just him, with no crew, having a fun day. I shouted up, “What are you going to do?” He responded, “How about a ball grabber?” And sent this iconic shot. I think it really shows what kind of person Shane was: so much fun and always ready to share the moment—the true spirit of skiing. Photo: Hank de Vré

This article first appeared in The Ski Journal Issue 12.4.