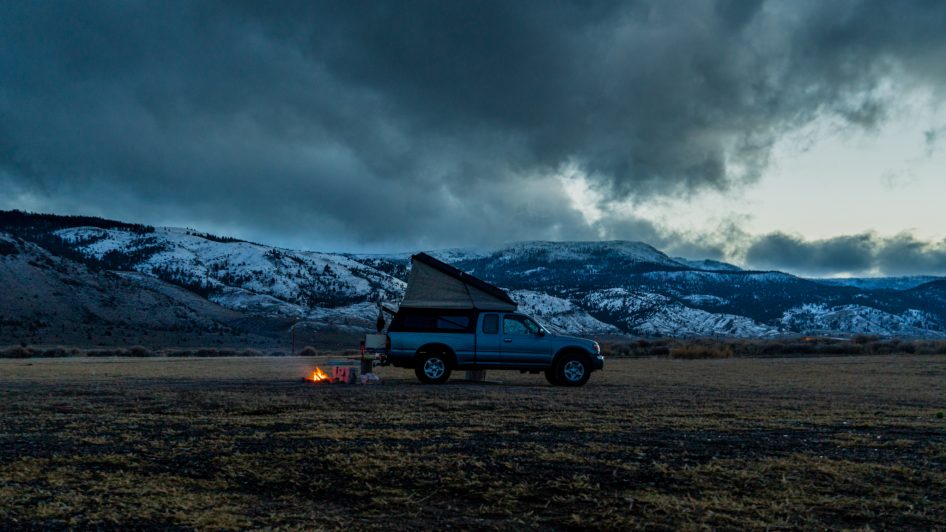 For a lot of us, our vehicle is a whole lot more than just a ride to and from the mountain. A ski rig can be a safe-haven from the cold, a mobile kitchen to avoid ponying up $15 for a lodge burger, and a portable office for those who’ve managed to arrange their work life around time on the hill. This year, it’s taken on an even more essential role. With COVID-19 shuttering base lodges around North America, our vehicles have become Ground Zero for all of our alpine adventures.

But what goes into a ski rig? Sure, it’s main purpose is to deliver skiers to the goods, but a ski rig also reflects its owner, and might turn a few heads in the process. Fun, quirky, or practical, here are some mobile base camps that go the extra mile. 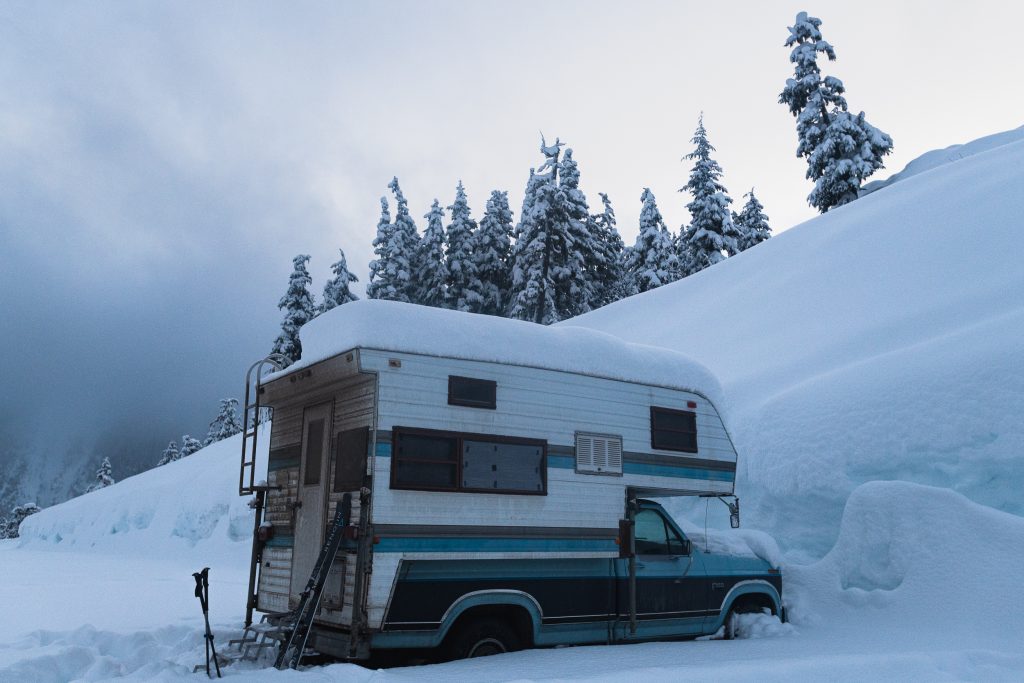 ABOVE TSKJ correspondent Matthew Tufts plans his winters around chasing storms in his (occasionally) reliable 1986 Ford F250. And when things go wrong? That’s where the story comes in. Photo: Matthew Tufts

After several seasons of bumming around in uninsulated truck toppers and tents, TSKJ correspondent and freelance writer and photographer Matthew Tufts happened upon his current setup: a baby blue 1986 Ford F250 with matching 1988 cab-over camper. Tufts says his renovations straddle the line between “utilitarian and aesthetic BS,” including a mini woodstove that’s great for drying gear, reclaimed barnwood floors that look good and make for easy cleaning, and a bookshelf in place of a fridge so he can share reads with folks he meets on the road.

“I’ve always been a sap for nostalgia, and this setup drips with it,” he says. “All told, it’s a rustic (and rusty) set-up, but it gets the job done. Ski-bumming isn’t about glamping after all; it’s about skiing your ass off.” 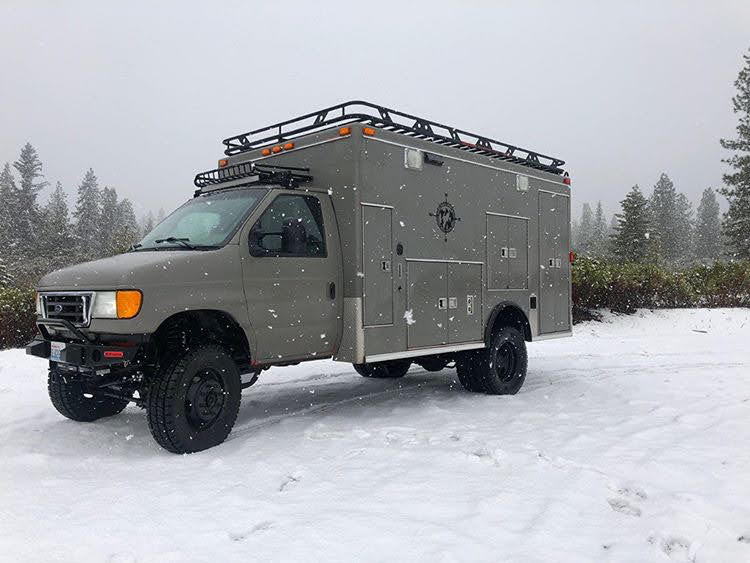 ABOVE Without much in the way of on-hill lodging in the Pacific Northwest, Tanya is the Furrer’s personal ski-in, ski-out accommodations. Photo: Furrer Archive

For 10 years before Chris and Michelle Furrer bought “Tanya” from the Skykomish, WA Fire Department, the ambulance spent its time rescuing people around the North Cascades and Stevens Pass, WA. The ambulance body-style appealed to the pair for the shelter and warmth it could provide during harsh Pacific Northwest winters, but also space for the interior retrofit that the couple ultimately completed themselves.

One of the biggest benefits of the ambulance life? RotoGrip automatic snow chains that came equipped from the fire department. “Flip a switch, and we’re in 4×4 with pneumatic snow chains down on her tires,” the couple says of the system that deploys spinning sets of chains without even having to stop the vehicle. “Whether it’s a resort, backcountry logging roads, or even dragging sleds behind on a trailer, she’ll get us there. We’ve always been confident getting there, staying there, and getting back out!” 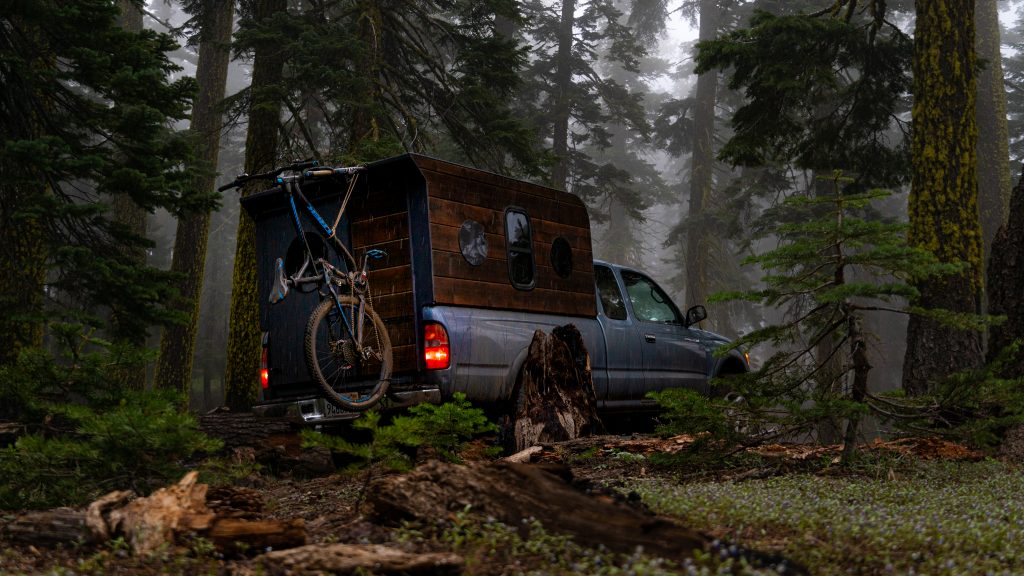 ABOVE The ski rig life is an evolving process for Michael Rohde, but the rolling log cabin seems like a strong contender. Photo: Michael Rohde

When Michael Rohde decided to leave his Tahoe home for a life of travel in 2019, without paying for lodging along the way, he opted to convert the fiberglass shell of his Tacoma into a pop-top camper. “Unfortunately, I soon learned that living in a glorified tent through winter is pretty brutal,” he says. “Once the COVID lockdowns hit, I sold the pop-top and took the opportunity to build a proper four-season camper. She’s a work in progress, but I couldn’t be happier.”

For Rhodes, the biggest appeal of this setup is the ability to get to and park anywhere. The hand-built rig includes an indoor/outdoor kitchen, two inches of foam insulation, an insulated murphy bed, and a woodstove. The Tacoma itself is going strong with over 250,000 miles, and has new suspension, wheels, and tires. “I have an unlimited amount of ideas for the camper and truck alike,” he says, “and I’m excited to continue the journey. 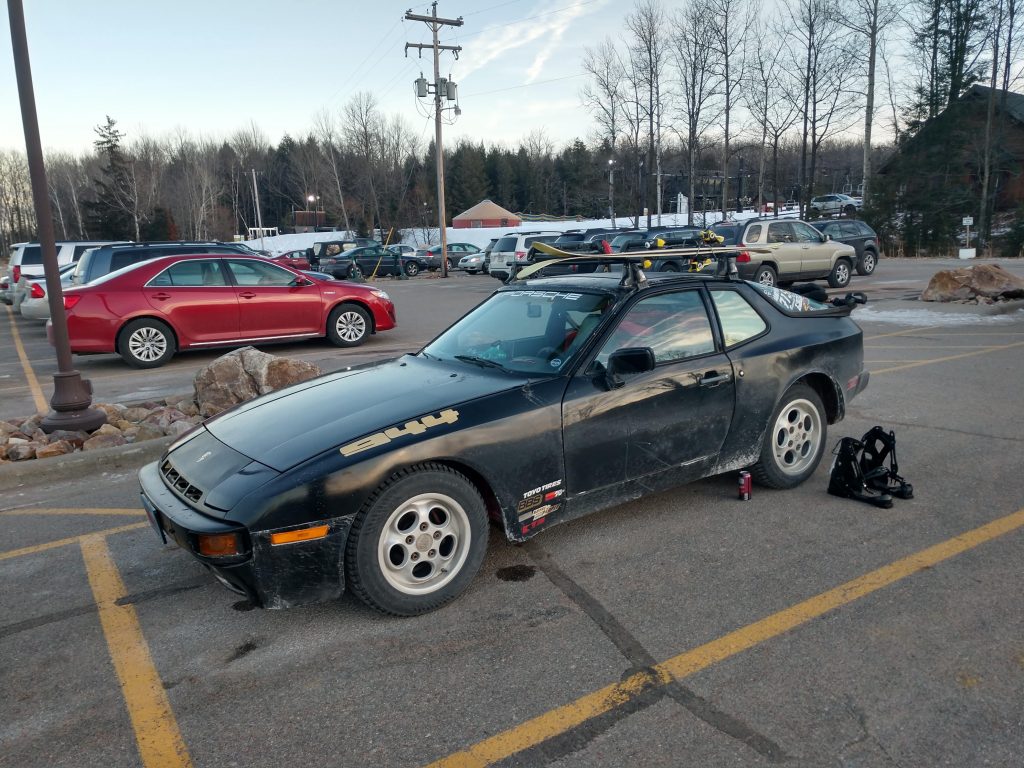 ABOVE A Porsche 944 isn’t exactly our first thought when it comes to ski rigs, but Ben Brunell’s tricked out road pony gets him from here to there in the Midwest, and a few fist bumps in the process. Photo: Ben Brunell

Ever since Ben Brunell bought his Porsche 944 12 years ago, he’s wanted it to be a wintertime ski vehicle. But it wasn’t until a house fire nearly destroyed it six years ago that he decided to fix it up and prep it for winter. He gave it snow tires and a sand bag in the back, and started driving it to the ski hills of northern Wisconsin and Michigan’s Upper Peninsula—making trips to Mount Bohemia near Copper Harbor, MI, Spirit Mountain in Duluth, MN, and Cascade Mountain in Portage, WI. He’s since added a ski rack, LED light bar, and studded tires.

Brunell says the car puts a smile on people’s faces wherever he goes, and its heater works great. “It handles better than you think it would for being a rear-wheel drive car,” he says. “It just plows through 10-inch snowdrifts. It’s reliable, warm inside, and carries just enough gear for a few-day ski journey with enough room for a buddy to tag along.” 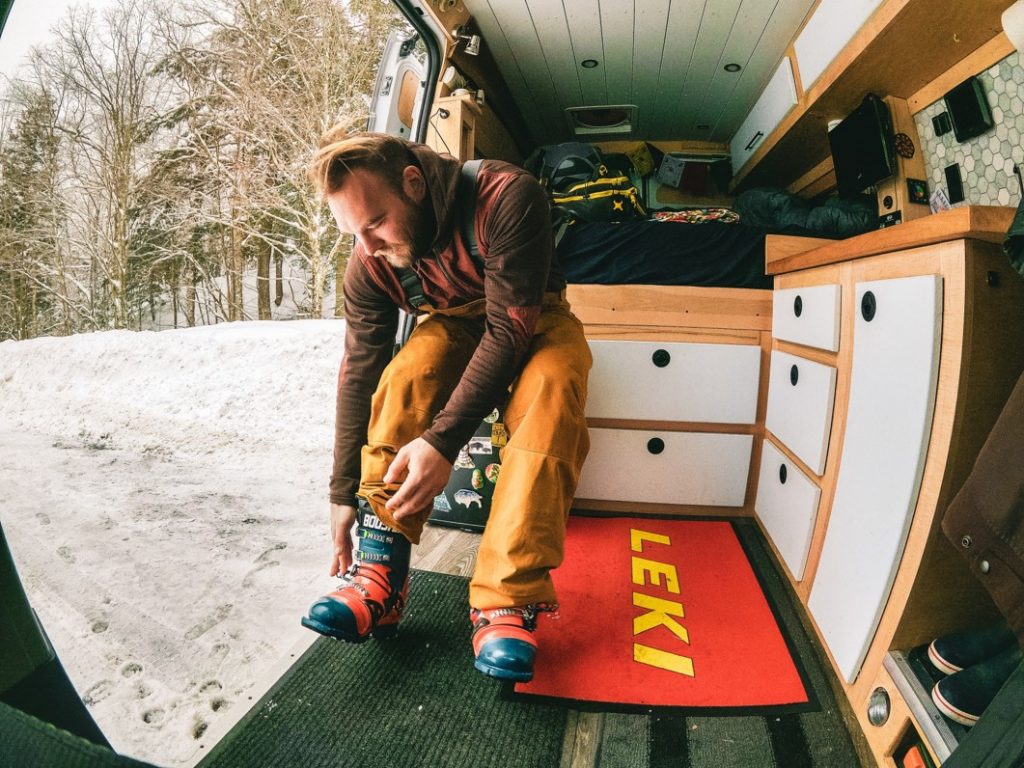 ABOVE Like many in the ski rig game, dialing in the ideal mobile basecamp has been a process for Adam Sauerwein. Equipped with solar panels, a kitchen, and plenty dry gear storage, his Ram Promaster might be his most solid iteration yet. Photo: Adam Sauerwein Archive

When Adam Sauerwein decided to make the switch from bus living to van living, he went with a Ram Promaster for its stealthy looks, solid gas mileage, cruise control, and also the duality of a home base and daily driver. His build-out included roof racks, solar, and a sleek interior with all the essentials like a bed, gear storage, and a place to cook. It’s become his perfect home away from home at resorts and trailheads near where he’s based in upstate New York, and on road trips west.

“On the East Coast, resorts are much more lax on overnight parking,” he says. “So, a van is the ideal rig to get you to the slopes and secure a spot in the lot before the lifts spin. It allows you to chase snow and live that ‘whatever, whenever’ lifestyle.”