A general view of the Bamyan Ski Club headquarters in February 2021. The building is usually surrounded by snow at this time of year, but a dry winter provided very little snowfall at this altitude. The ski club is run by local skiers and former 2018 Winter Olympic hopefuls Sayed Alishah Farhang and Sajjad Husaini.
My name is Nazima Khairzad.

I was born in Afghanistan’s Bamyan Province, a year after the fall of the Taliban. Up until a few months ago, it was the only home I ever knew. That’s when they returned. That’s when everything changed.

Nazira Khairzad (far left), her sister Nazima Khairzad (center) and their father (right) all sit in the back of the car as they make their way toward the mountains before the women compete in the 2021 Afghan Ski Challenge. The annual two-day event, which takes place in February in Bamyan, Afghanistan, hosts a women’s ski race, a boy’s ski race and then a men’s ski race the following day.

I’ve lived my whole life in the mountains. Bamyan Province is cold in the winter and the peaks around our villages are full of snow. The wind is always blowing. Temperatures drop to 15 degrees below zero Fahrenheit. We keep our stoves on in our houses to stay warm.

Before we moved to the city of Bamyan (within Bamyan Province), my family lived in a remote town called Kahmard. It was a restrictive place for women. We had no rights. My sister Nazira and I had to wear burqas and we weren’t allowed to study or play sports. My mother didn’t want her daughters to grow up that way. This was a new Afghanistan. She moved with us to Bamyan. Eventually, our father left his job as a police officer and followed us.

Nazira is two years younger than me. We were always interested in sports. At first, our parents didn’t accept it, but after crying and yelling a lot they allowed us to try. Soccer, volleyball, hiking. They told us that society didn’t used to be like that, that women in sports wasn’t part of our culture. But they said now they were proud of us. We believed them. 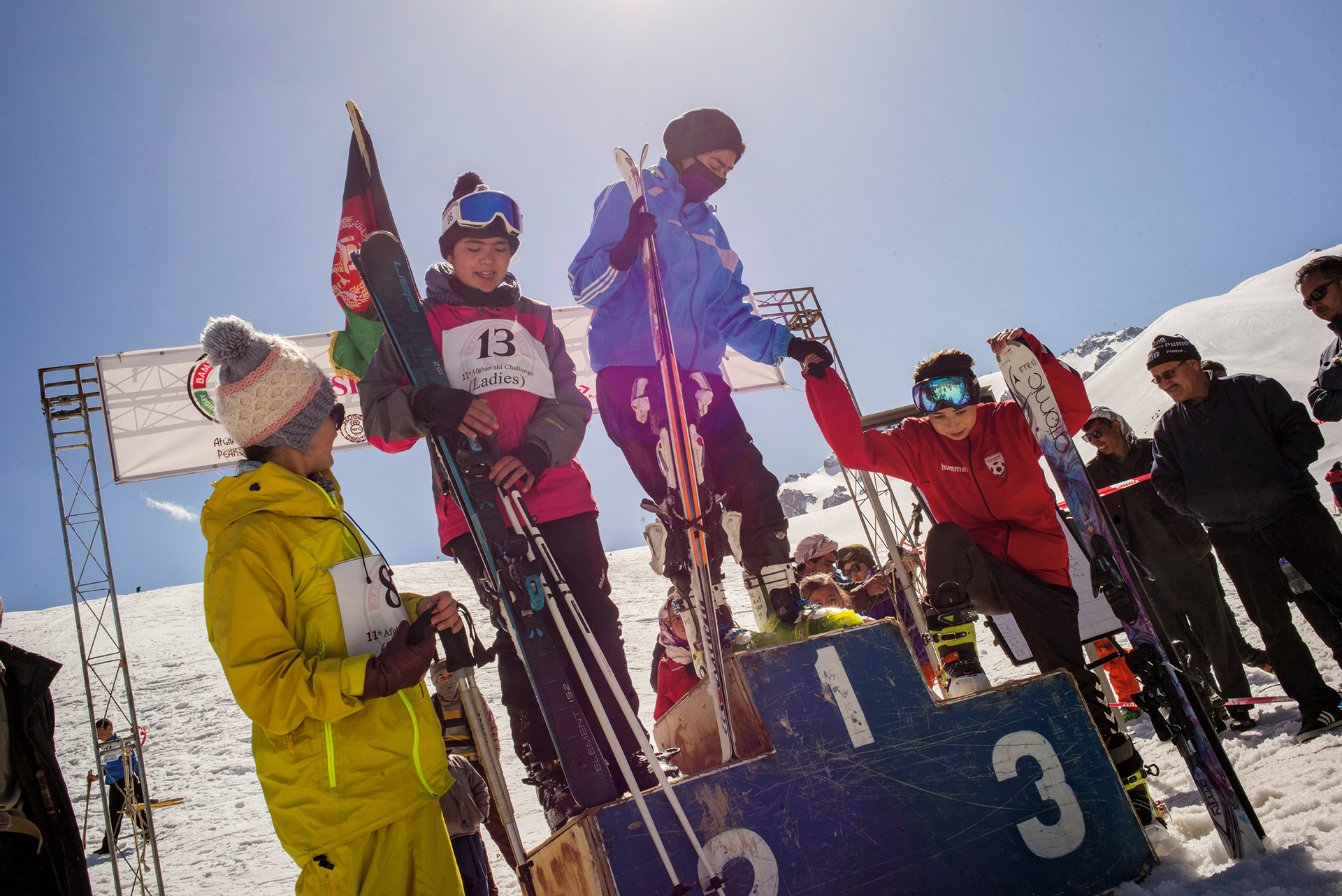 Nazira helps a friend onto the podium after Nazira won the women’s Afghan Ski Challenge race. Nazima had won the event a year earlier, but fell during the 2021 competition, hurting her hand. Their father was also in attendance—the first time he’d ever watched a ski race.

I like to live a life full of risk, adventure and challenge. It helps me relax. I saw boys skiing with Bamyan Ski Club, and I wanted to try. My sister was the only reason we were allowed to go. My family didn’t want me to ski alone, but five years ago we said we would ski together, and our parents let us.

The first days on skis were tough for me. We borrowed the boys’ equipment from Bamyan Ski Club and had a few foreign coaches. We don’t have ski lifts, so we had to hike up the mountain with our skis. In Afghanistan, if you want to be a good skier, you need to be a good hiker. That first year, we hiked in our normal clothes. It was so cold. When we sat down to rest, our long dresses got heavy and wet. It was so difficult to turn around a gate. It was crazy though. Just me, Nazira, and our friends on top of a mountain. I knew I wanted to continue skiing. 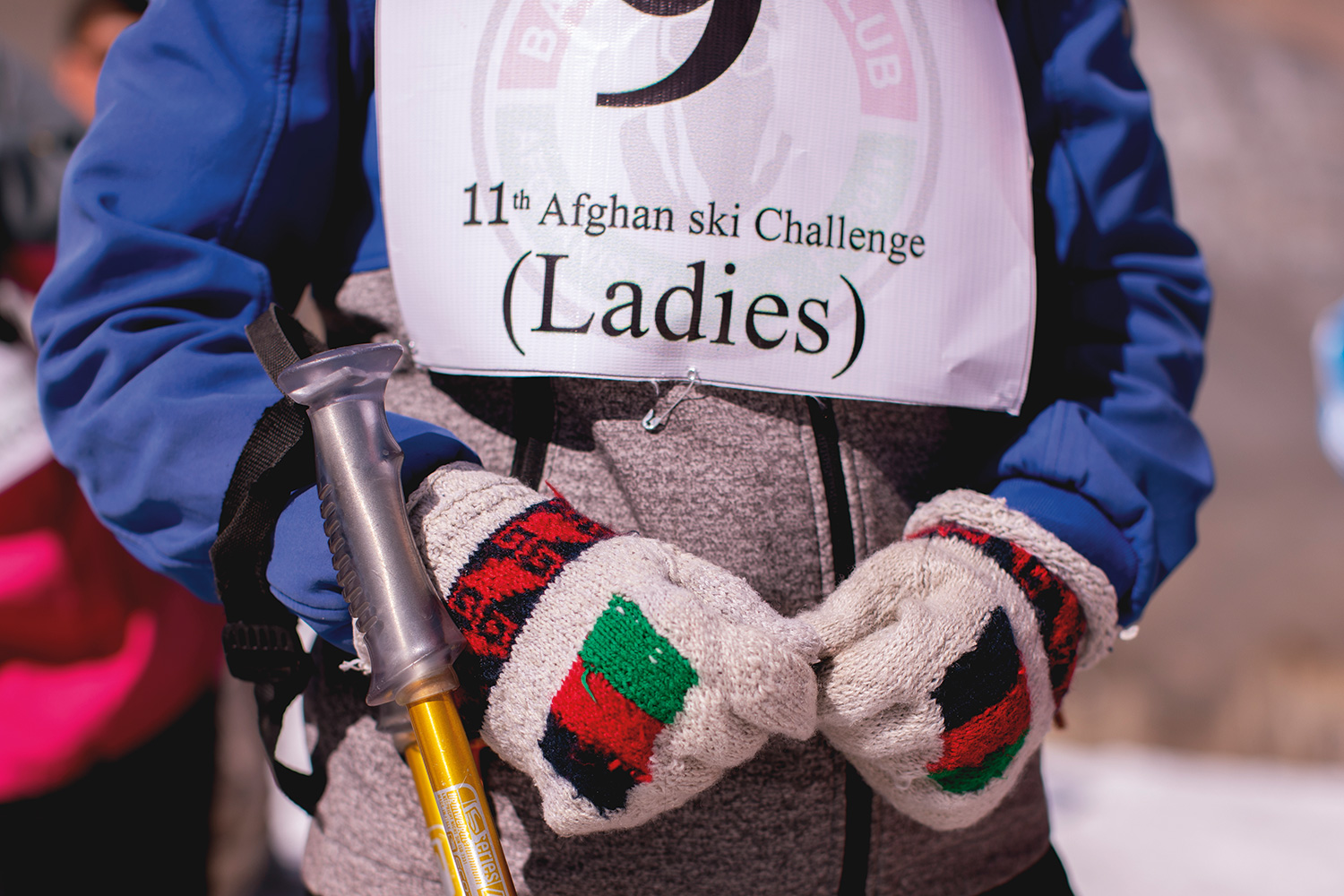 A skier with knitted mittens containing the colors of the former Afghan flag wears her bib showing her competitor’s number and confirming her place in the 2021 Afghan Ski Challenge. After the Taliban retook control of the country in August 2021, they raised a new black-and-white flag over the capital in Kabul.

The next year, foreigners gave us real ski clothes. They were so much warmer. We are Muslim, so religion made it a little difficult to wear a ski cap instead of our traditional head scarves, but we knew it was not a mistake. I liked slalom and hitting jumps. It felt like I was flying.

Nazira and I started racing. We competed in the Afghan Ski Challenge, our local race, starting in 2018. In 2020, I was part of an Afghan ski team that traveled to Pakistan for an international competition. It was my first time out of the country, and I finished third. I was the first Afghan, man or woman, to win a medal at an international ski event. It was unbelievable. After that, everything changed, especially my mind. I always thought that life was just in Afghanistan, but this sport had given me a wider perspective. Skiing was something that could connect me to the entire world.

When I came home there was a ton of media coverage about my results. Suddenly my friends and other women started to join us. Day by day, we were gaining more participants. Last year we had 49 girls. Naziri won the Afghan Ski Challenge and my father came to the race. He was so supportive. It was the first time he had seen us ski race.

Now I’m in Pakistan again, but this trip is different. This time I don’t know when I’m going back home, or if I ever will return. 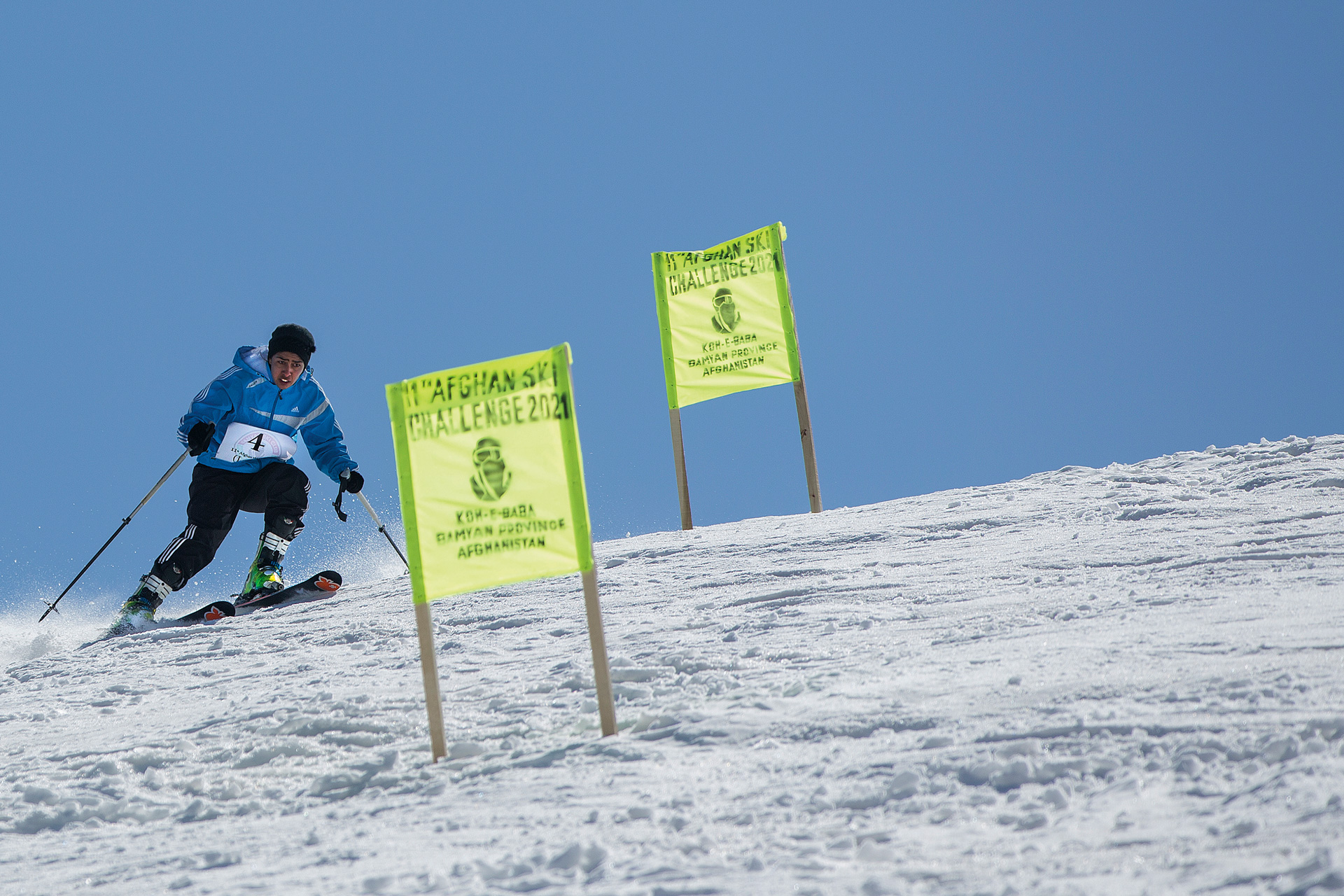 Nazima’s sister Nazira skis through the gates as she competes in the 2021 Afghan Ski Challenge. Though Nazima wasn’t able to finish the 2021 race, she became the first Afghan (man or woman) to podium in an international event when she placed third in a slalom competition in Pakistan in 2020.

In early August, the Taliban took Nimruz Province. The next day, Jowzjan Province. I couldn’t believe it. My parents said they were worried it would be like 20 years ago. I was studying and working as a tour guide in Kabul. In a matter of weeks, they would be there as well. I was scared. I knew I had to leave. I hired a driver to take me to the Torkham border crossing into Pakistan, but the border was closed. Armed guards hit us. I cried the entire six hours back to the capital city. It was the strangest feeling of my life. I didn’t know what I was going back to.

With the Taliban advancing, my sister and a group of Afghan skiers were able to get special Italian visas, leaving Kabul two weeks before the city fell. My friend Eva zu Beck, a travel blogger and film producer from Europe, helped me get a flight to Islamabad, Pakistan.

The situation in Afghanistan has gotten worse each day. Under the Taliban, women aren’t allowed to work or study—and sports are out of the question. In Bamyan Province, girls are getting married to their relatives because they don’t want to get married with the Taliban. Thirteen, 14 years old. One of my ski friends said she was sad because her family wanted her to marry her cousin, that it would be safer that way. 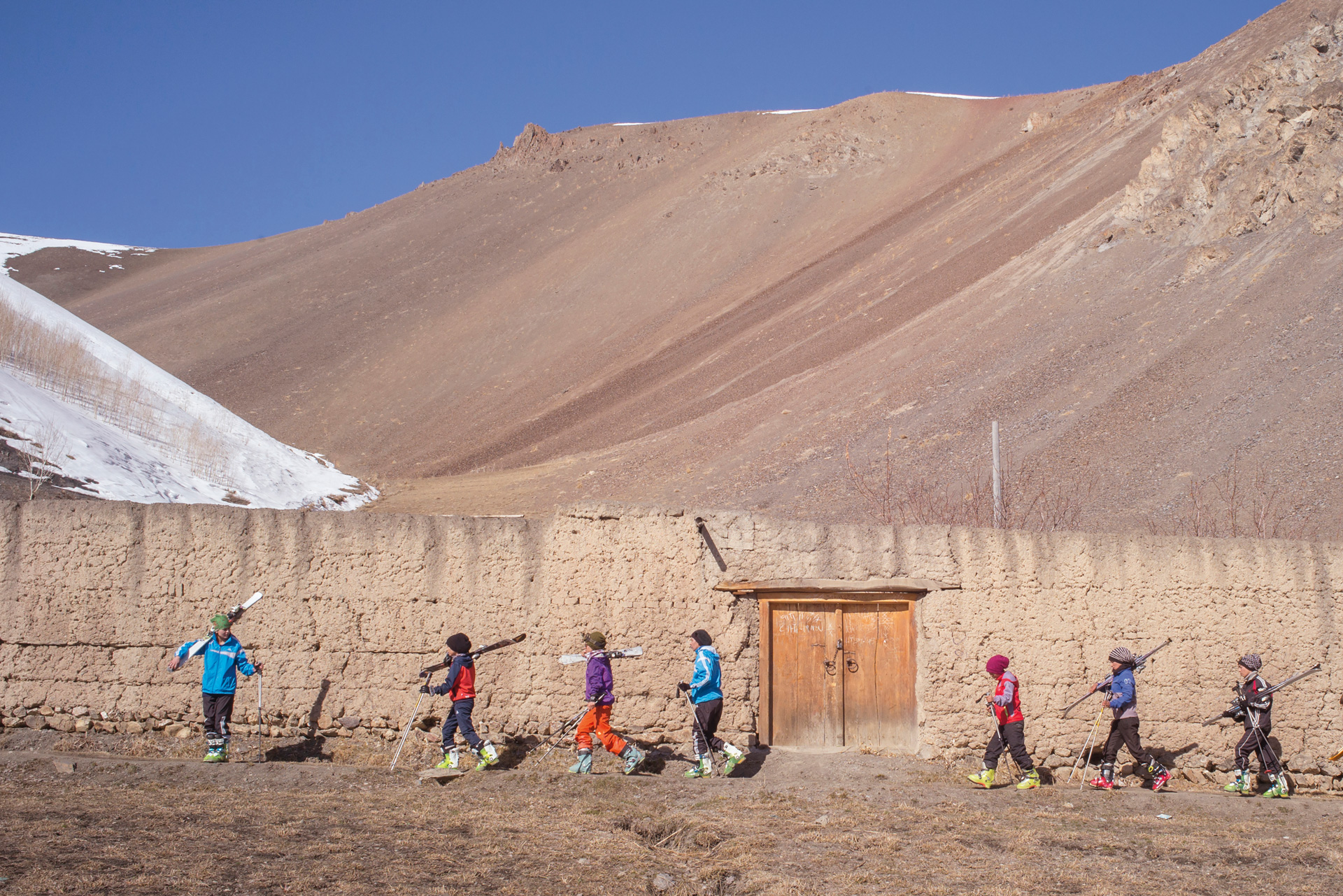 Nazima (far left) looks back at her friends (and sister Nazira in blue) as they make their way up toward the snow on the first day of the 2021 Afghan Ski Challenge. Nazima traveled back from Kabul, where she was working as a tour guide, to compete in the annual event.

One woman from the national volleyball team has already been killed. Nowadays, even more are committing suicide.

I used to be known for my athletic accomplishments. Now, I’m worried that that attention will get my family in trouble. My mother and father are still there and I’m trying to get them out. They had visas to Pakistan but were turned away at the border. I’ve been trying to go back, but my parents won’t let me. They say I’m their best hope and that I should try my best. Nothing is working.

Just a few months ago, I dreamed of being a professional skier and making a school in Kahmard. I wanted to teach Afghan girls how to ski. In Kabul, I had a team of 20 girls signed up for a ski team. This season, I had plans to take them to Bamyan. Even now, I can’t believe that everything has changed all at once. 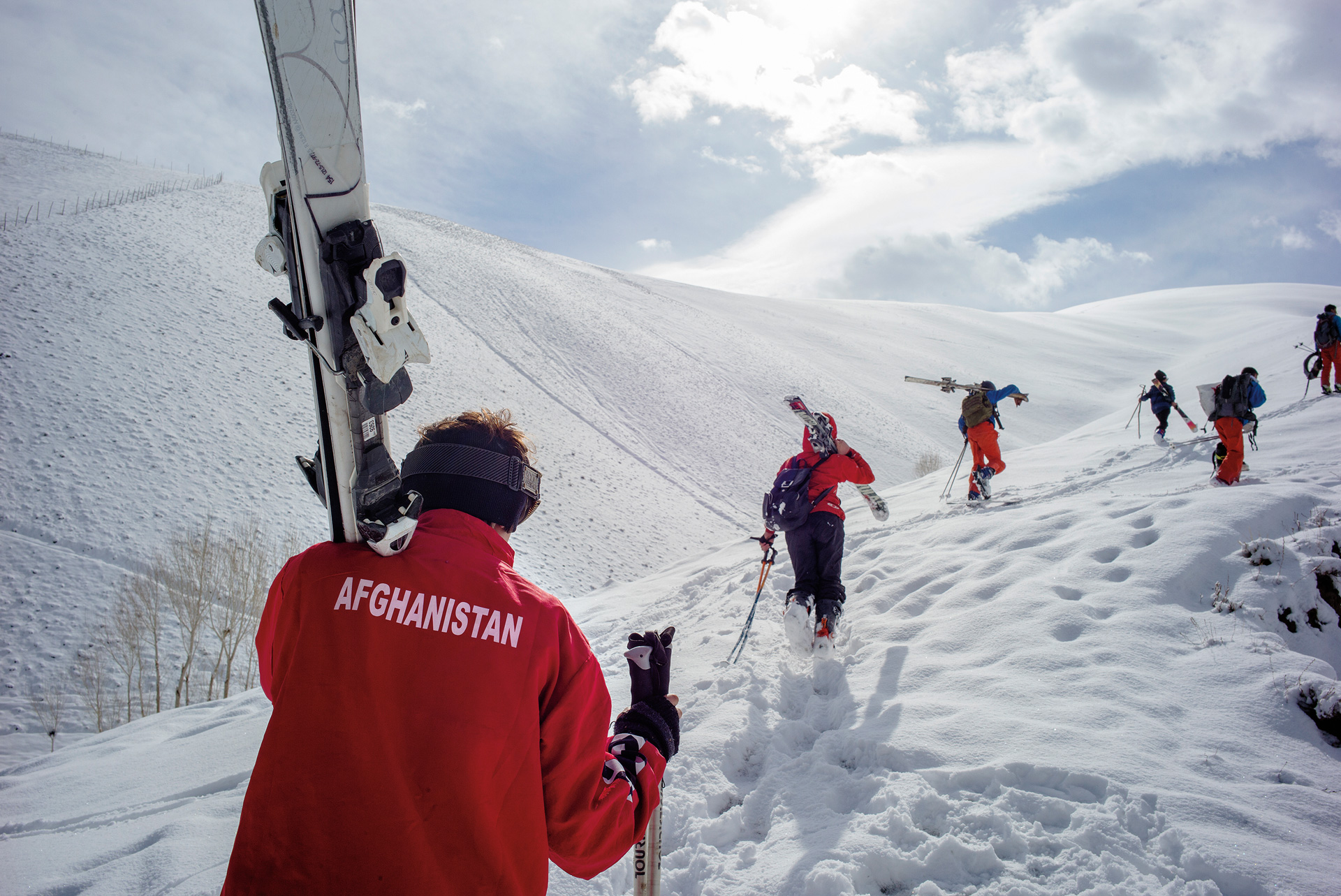 Skiers from the Bamyan Ski Club make their way up the mountain at the start of the day for a few hours of training. Without a working chairlift anywhere in the country, everyone must earn their turns.

The anxiety and depression are very hard. I moved in with a family in Pakistan because being alone was too much. I’ve started losing the crowns on my teeth.

The only reason my sister, the other Afghan skiers and I are out of Afghanistan is because of our skiing. It was a huge opportunity for us. Still, many of us are worried about our families and want to go back. I hope we all get the chance to meet and ski in Afghanistan again.

I miss skiing. I wish I was there on top of the mountains. I miss sports. I miss my country. I miss my mom’s food and her cooking. I miss my dad. We have always been so close. My dad is my best friend. He’s never been skiing. One day I hope we can try together. Inshallah. 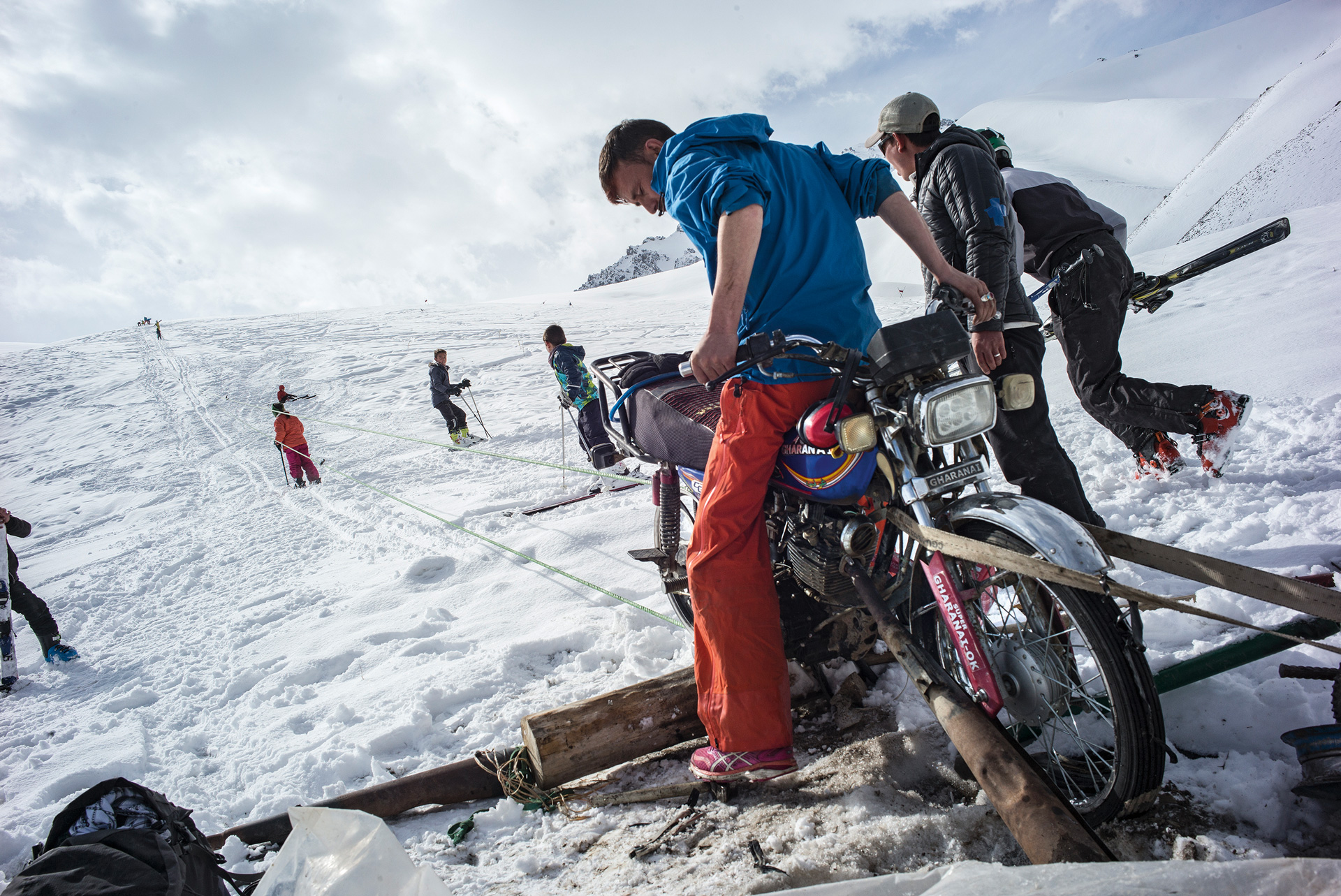 In 2021, Bamyan skiers used a motorbike-turned-rope-tow to make their way up the mountain during ski training. Purchased in the village, the motorbike just needed a little bit of gas and a willing lift operator to get skiers uphill in a fraction of the normal hiking time.

To learn more about the developing crisis in Afghanistan and how you can help with the ongoing refugee resettlement process, please contact the International Rescue Committee (IRC) or United Nations High Commissioner for Refugees (UNHCR).