Physicists have proven our universe exists in four dimensions, but there are certain places where you can glimpse—just for a moment—one dimension beyond that realm. For some, it’s the depths of a painting, for others a guitar solo. For decades, legends from Scot Schmidt to Craig Kelly have found this transcendence at Island Lake Lodge, a cat skiing operation in BC’s Lizard Range. 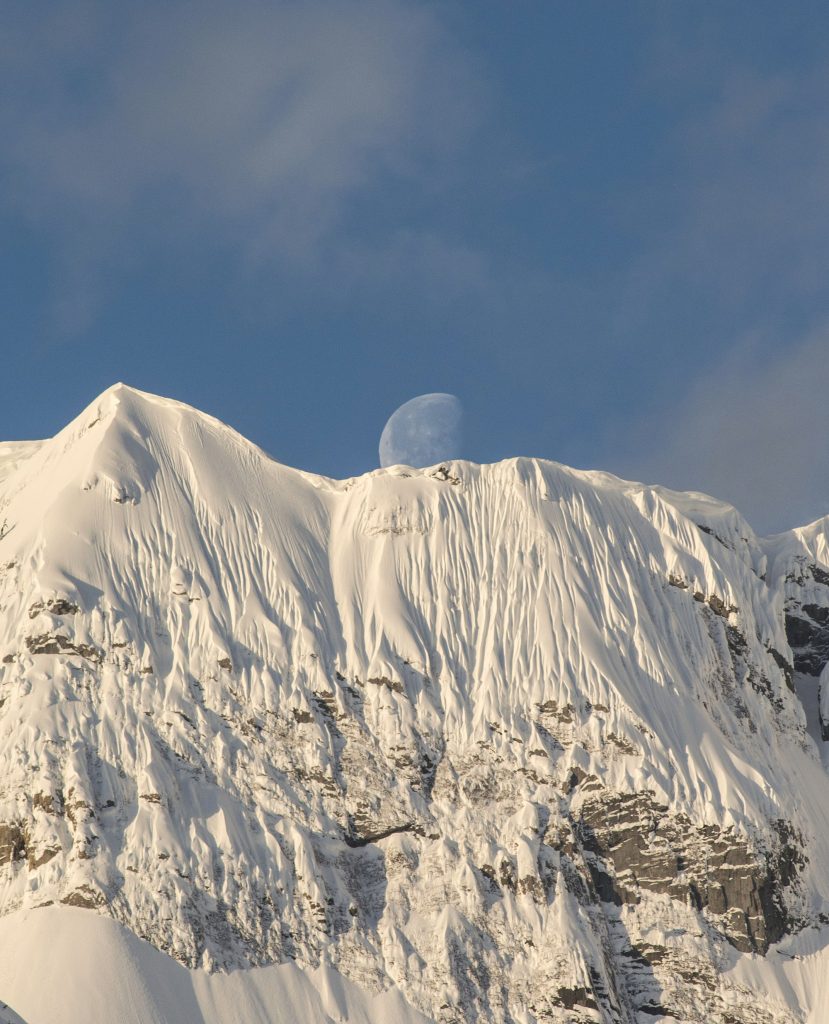 ABOVE Moon setting over the Lizard Headwall

In late March of 2016, a crew of us—including Nick McNutt, Tim Durtschi, Dane Tudor and myself—made the journey to Island Lake to see if we could find a glimpse for ourselves. Accompanied by Teton Gravity Research’s Steve Jones and veteran camera operators Dustin Handley and The Wulf, our mission was to wrap up the final segment of a TV show being produced on Island Lake, and of course to get footage for the latest TGR film, “Tight Loose.”

For the past few months, Nick and the Island Lake crew had been scheming on an idea: A gauntlet of huge backcountry booters, one airing over a giant limestone cave—but all with perfectly shaped, groomed takeoffs, like a backcountry terrain park with powder landings. By the time we arrived, the jumps were finished and the run-ins were flawless corduroy. 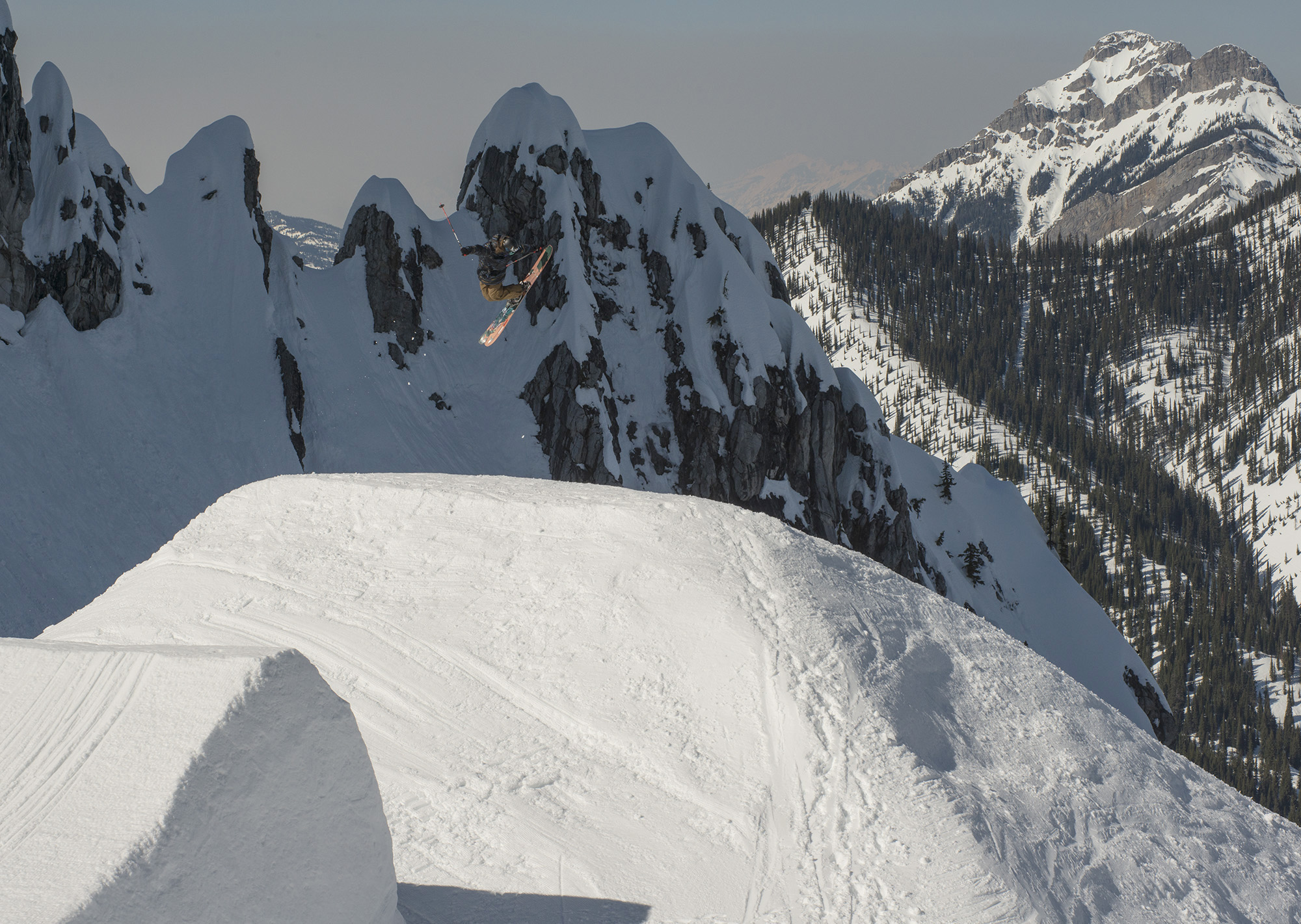 ABOVE Nick McNutt worked super hard hitting the jump a couple dozen times.  Even in the last light of the day, he was still doing laps.

Just as exciting, however, was when the guides informed us that the alpine big-mountain lines were more filled in than they’d been in 15 years. This included some of Craig’s favorites, as well as Scot Schmidt’s iconic dead-tree drop from the cover of “P-Tex, Lies & Duct Tape.” Things were good to go, from top to bottom, and so we took advantage.

On day one we started with a classic hip jump that Craig used to slay back in the 1990s, where Nick did the feature justice with a huge double backflip. With our freestyle fix sated, we bumped into the alpine, and ticked off hit after hit, line after line and cliff after cliff. It may not have qualified as legendary—in a place as iconic as Island Lake, that’s a tough claim to make—but it was one hell of a session. Schmidt and Kelly would have been proud. 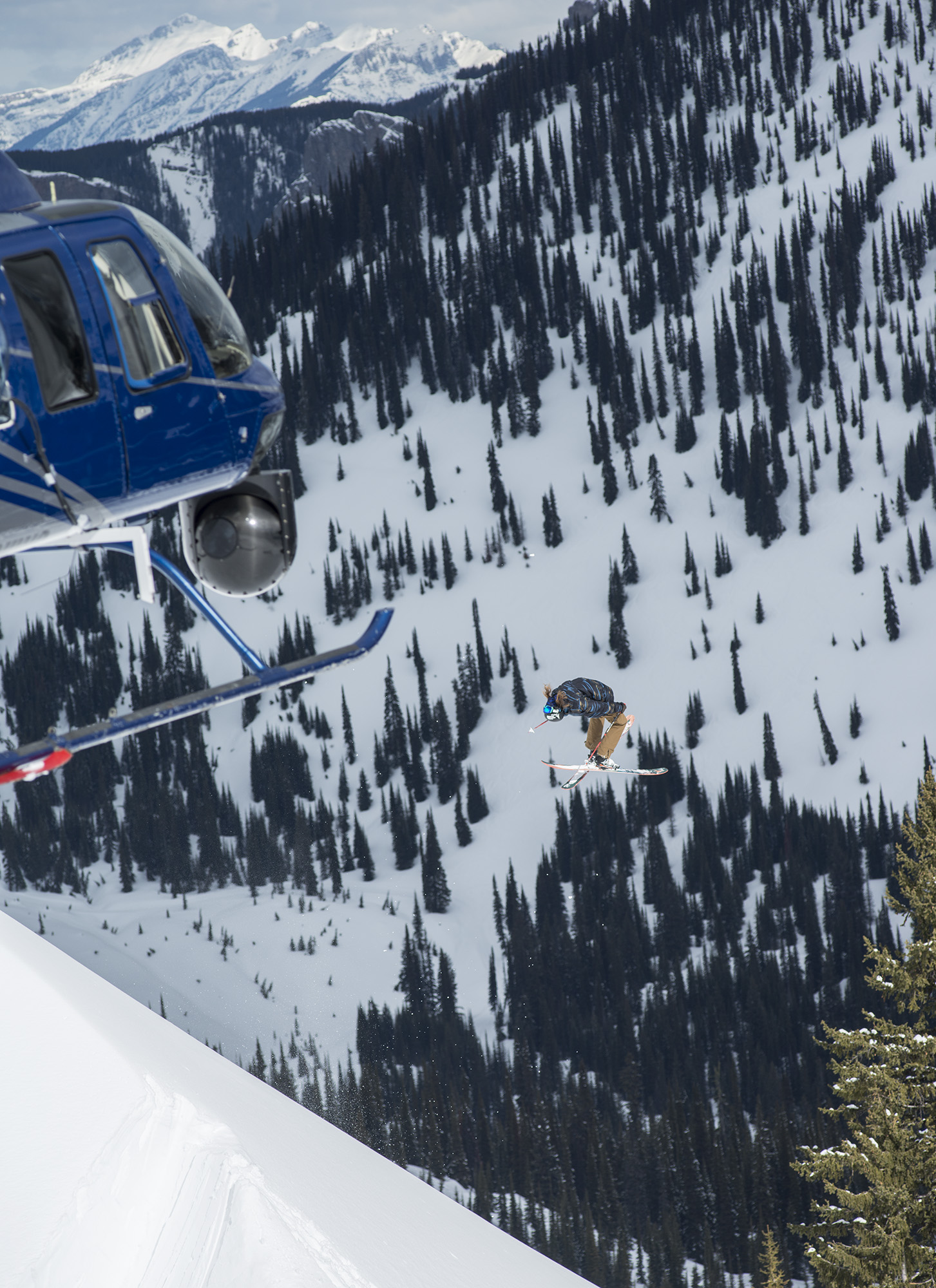 ABOVE Nick McNutt with a huge double backy off the Ride Hit.  Heli with GSS camera in the foreground

Over the next few days we moved into lower elevations, jibbing around while waiting for solid weather to prep the bigger features. Tree bonks soon turned into tree burning, as we set fire to a few snags along the way. The guides claimed they would be a fire hazard come summer, and so we went to town. We figured it was probably the coolest method for making a gray day look rad. 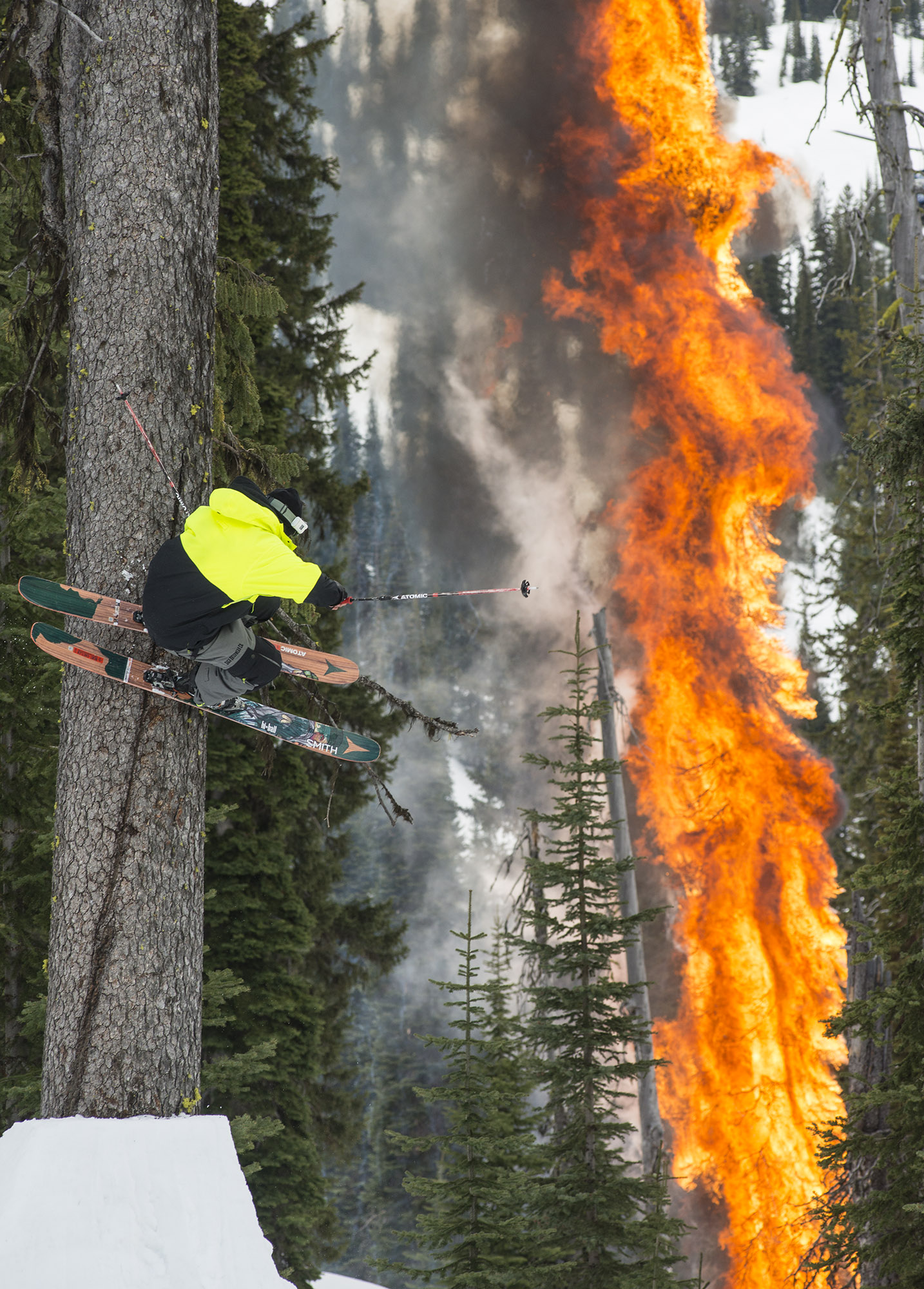 ABOVE After the snow heated up a bit in the spring sun, we built a tree jib and lit an old dead snag on fire… Tim Durtschi hitting it.

And then, as the end of the trip rolled around, Nick and the Island Lake crew’s brainchild came into shape. With the new snow we had to reshape the lip, a true comedy considering it was a bunch of powder skiers that hadn’t built a park jump in years. Some skills never leave you, however, and after a lot of finagling we made it happen. It was monster of a session; I think McNutt hit the thing at least 40 times, and the rest of us contributed our own dose of style.

Right before we hit the “park” jump, our guide Brenda pointed out a raven hovering overhead, and told me, “That’s Craig Kelly.” She explained this particular bird started coming around not to long after Craig’s passing in 2003, and that he often visits the operation’s skiers on clear days. The raven has even swooped down and brushed her forehead. “This place is magic,” she concluded.

In the French Alps, mountaineers claim that crows are the souls of the fallen alpinists. Perhaps that raven was a glimpse of that fifth dimension, the mysterious transcendence hidden between each pow turn or beautiful big mountain line. I don’t know if Craig was flying above us that day, but if he was, he was laughing alongside us as we enjoyed his snow-filled temple.

For more information on Island Lake Lodge, including their short film “Winter of Our Content” documenting the last few seasons at the operation, visit their website at www.islandlakecatskiing.com or follow them out on Instagram at @islandlakelodge.

For more of Mike McPhee’s work, including additional Island Lake stoke, follow him at @mcphoto99.

BELOW Dustin Handley, Dash Longe and Steve Jones taking a break on the snowcat 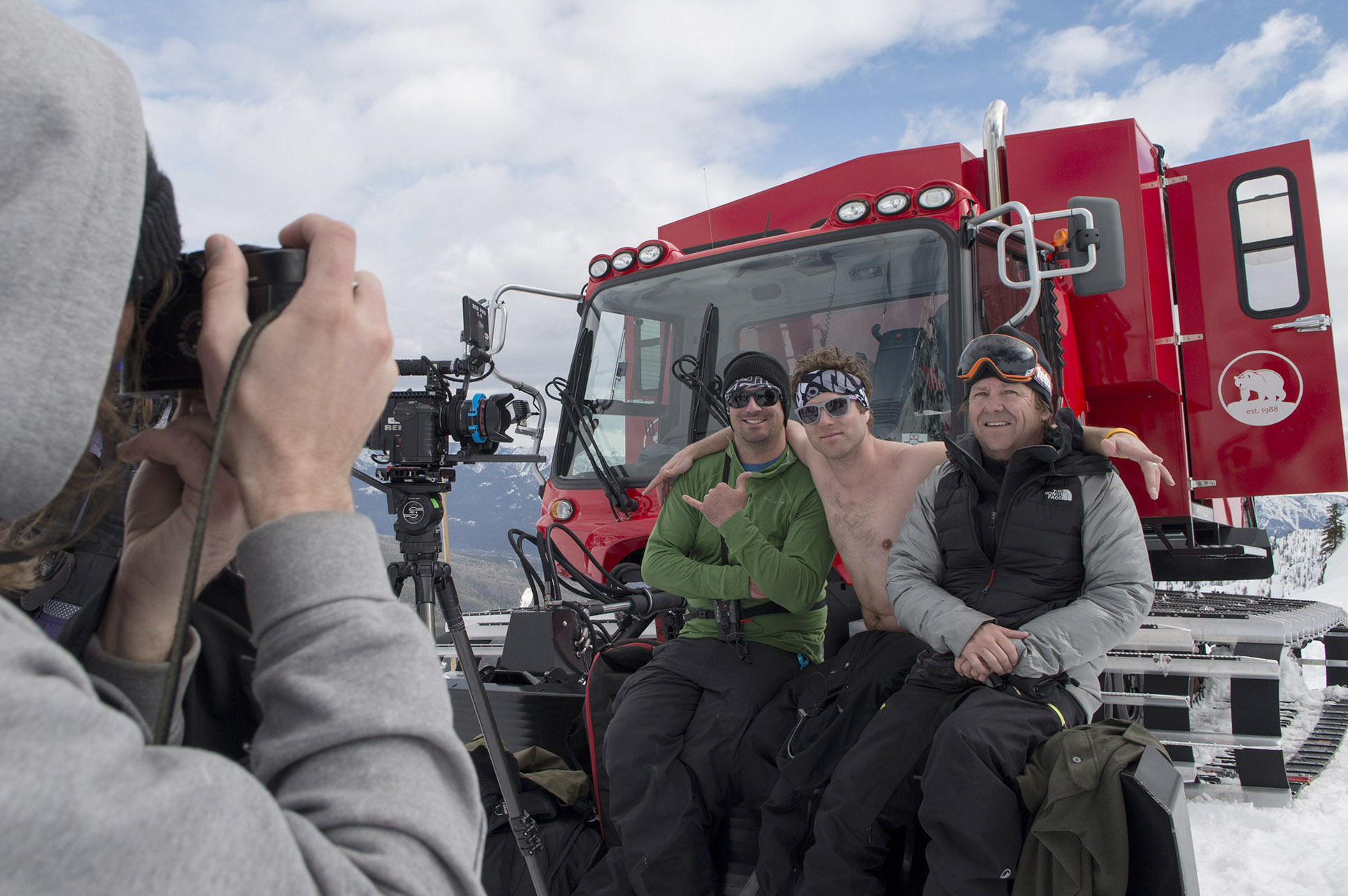