A photo of John Fellows as a young boy sits above his well-used work desk. The boy is wearing a red knapsack and crouches in a Sound of Music-esque Swiss mountain field, feeding a cow adorned with a traditional bell. His family had been traveling around Europe for two years by van, a break from his East-Coast military-brat upbringing, and the young Fellows sports a radiant smile.

It’s the same smile Fellows gets when he talks about his extensive travels since, or recounts his summers after college running around the Lauterbrunnen Valley, or the season in Gimmelwald where he met his wife. But it’s the experiences behind the photo that have set the tone for his life and work. 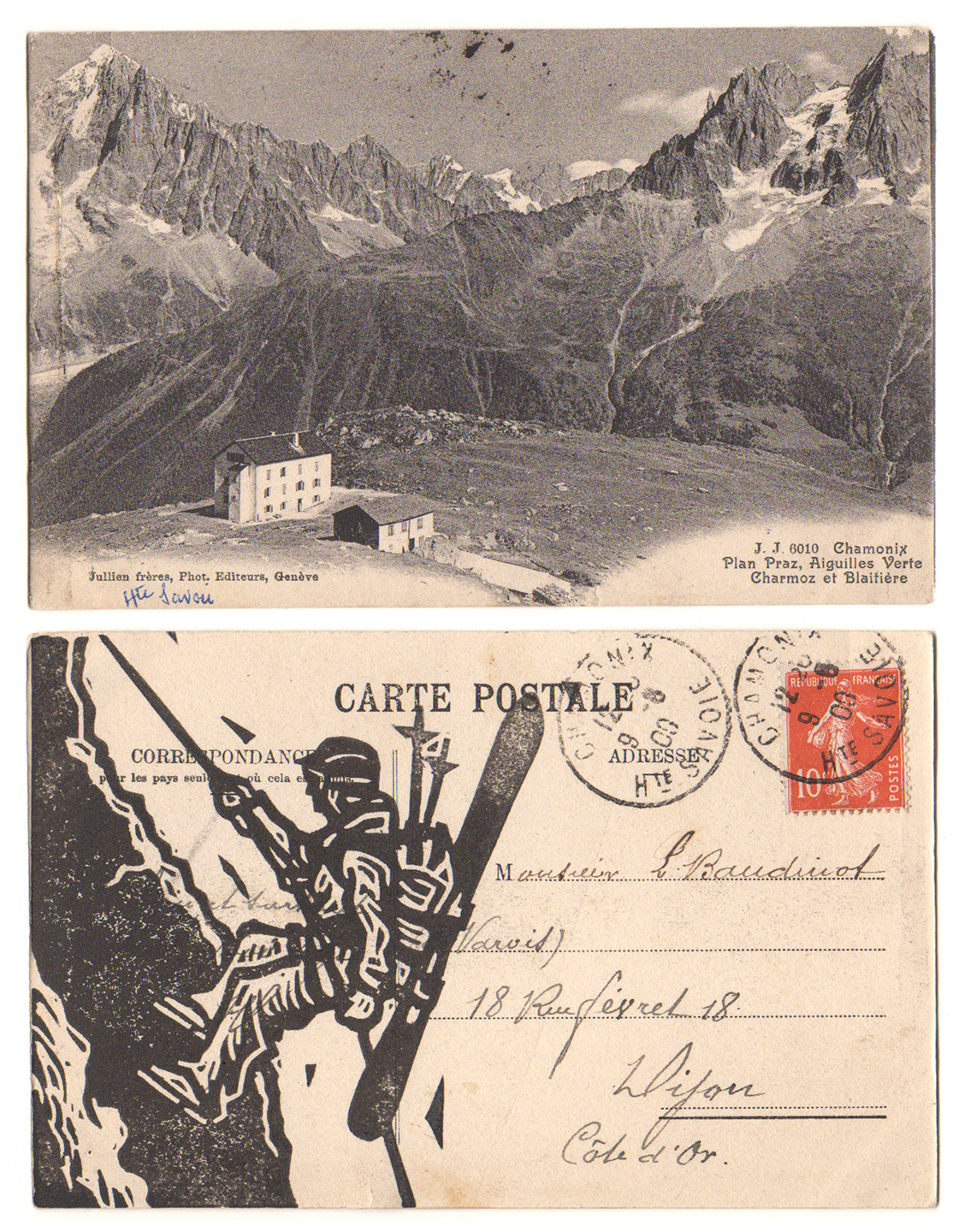 above I’ve been creating artwork on old envelopes and used postcards for years. In 2012, my wife and I went on a 16-day ski trip to the Alps. One of the stops was Chamonix, and I was blown away by the terrain and history. I found a bunch of old local postcards, and went crazy creating new prints. The yellowed paper and the imperfections of block printing complement each other extremely well, and create an antiquated, hands-on feel.

I met Fellows in his recently renovated home in a quiet corner of one of Denver’s trendiest neighborhoods, and after a quick tour we walked back to his studio. The space is adorned with maps, old mountaineering books and various retro postcards, some dating back to the late 18th century, some modern. It’s an inspirational setting, one that reflects Fellows’ aesthetic: Tidy, but homey and lived in.

“I used to want every line to be perfect, but eventually realized that if I really wanted to I could just use the scanner to straighten things,” he says. “The imperfections are an important part of what makes it unique.”

The themes of his work are almost all outdoor-culture oriented, obvious subject matter considering his passion for skiing and the mountains. But it also came from a gap he saw in the art world when he started.

“I wasn’t seeing much good art that represented nature and an outdoor lifestyle with a contemporary style,” says Fellows. “Most of the mountain art you would see was aspen trees or Native American themes for someone’s third home.”

Fellows starts his works by sketching each piece on tracing paper, dialing in the characters and scenes to his liking before transferring them to a block or sheet of linoleum. Then his real craft begins. Using a tiny u-shaped knife, he carves away all the negative space, creating a 3D version, where his weathered characters and idyllic but foreboding mountain and ocean scenes come to life. Next, he rolls water-soluble ink onto the linoleum and uses a standard wooden kitchen spoon to press the image onto paper. In his 13-plus years, he’s been through four spoons.

above The Swiss Alps have left a lasting impression on me: The views, the people, the mountain culture. “Home” was created as an homage to those mountains and the huts that dot the landscape. Every time I go back to the Lauterbrunnen Valley to visit friends, I feel truly at home.

For his simpler pieces the work ends here. For his multi-layered, multi-colored pieces, he prints the linoleum block on a variety of found paper. He then cuts out each piece of the print with an X-ACTO knife and re-glues them all back together. All the colors and tones come from the paper itself, the variety of which are visible on his desk. It’s a range that spans from scraps to old letters and maps to vintage scrapbooks and pages from books dating from the 1880s to today.

As Fellows and I walk towards espressos and sandwiches at a hip café a few blocks from his home, he talks about his current projects and to-do list. It’s a long one: He recently finished a piece for Armada Skis, a Pearl Jam poster and a T-shirt for the Northwest Avalanche Center, and is working on a series for a theatre, a project with Keystone Resort, a T-shirt for Strafe Outerwear, an online store to meet demand for his prints, and a personal project for an upcoming pop-up art show. Fellows is definitely not bored.

We finish up our coffee and lunch, and while heading back to the office he explains the core purpose of his art: Inspired by the mountains and meant to inspire through the mountains, conveying the same simple love as the grin in that long-ago image.

“For some, the artists’ goal is to push people’s buttons, to make people uneasy,” he says. “This can be important, but it’s not what I’m personally trying to do. There are a lot of problems in the world. I just hope my art makes people a little happier.” 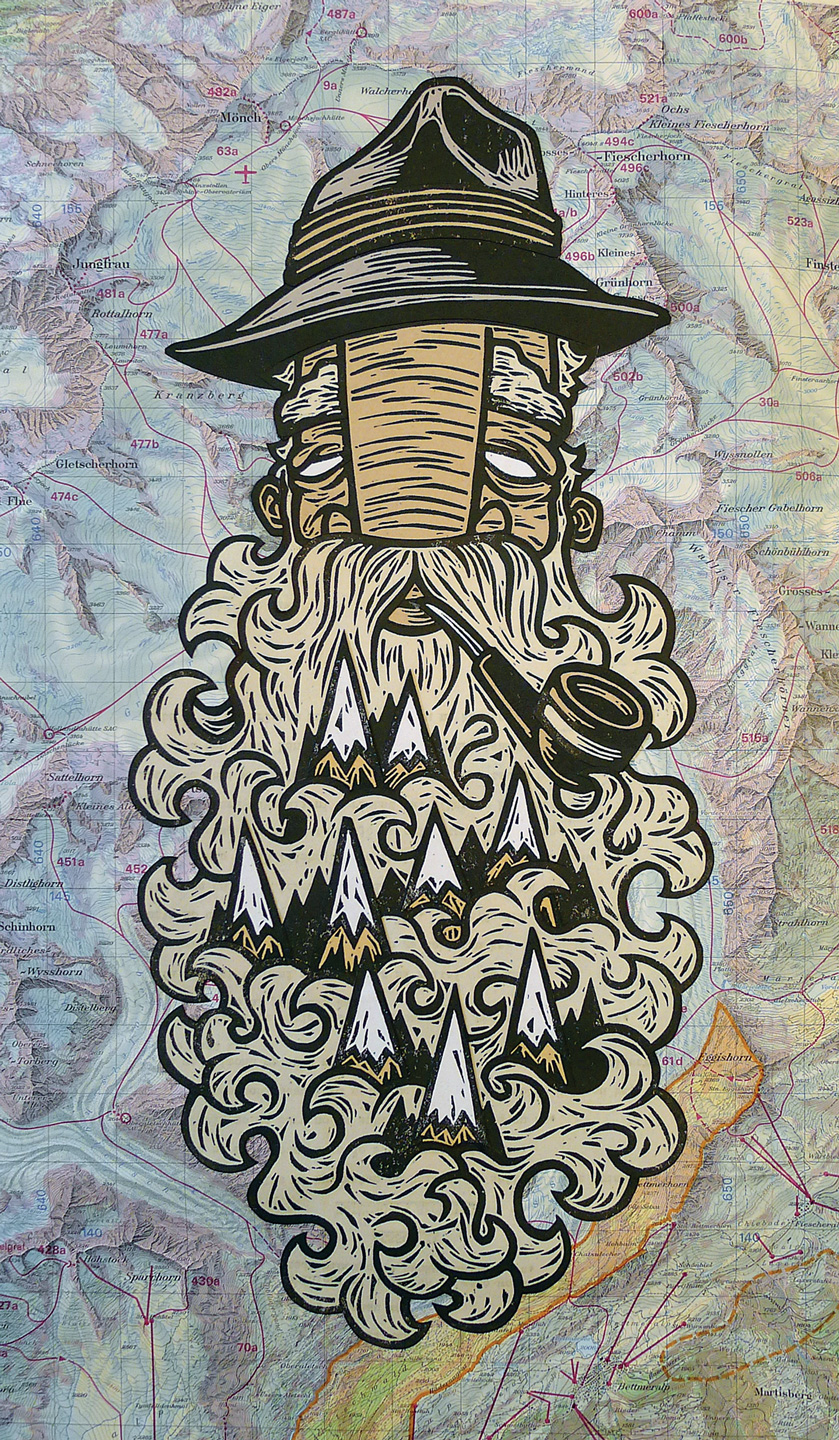 above I have spent a lot of time in the Lauterbrunnen Valley in Switzerland, primarily in the tiny, car-free village of Gimmelwald. This piece is a portrait of one of the long-time locals who lives there. I tend to carve a lot of old guys with burly beards—probably because I can’t grow an awesome beard myself. 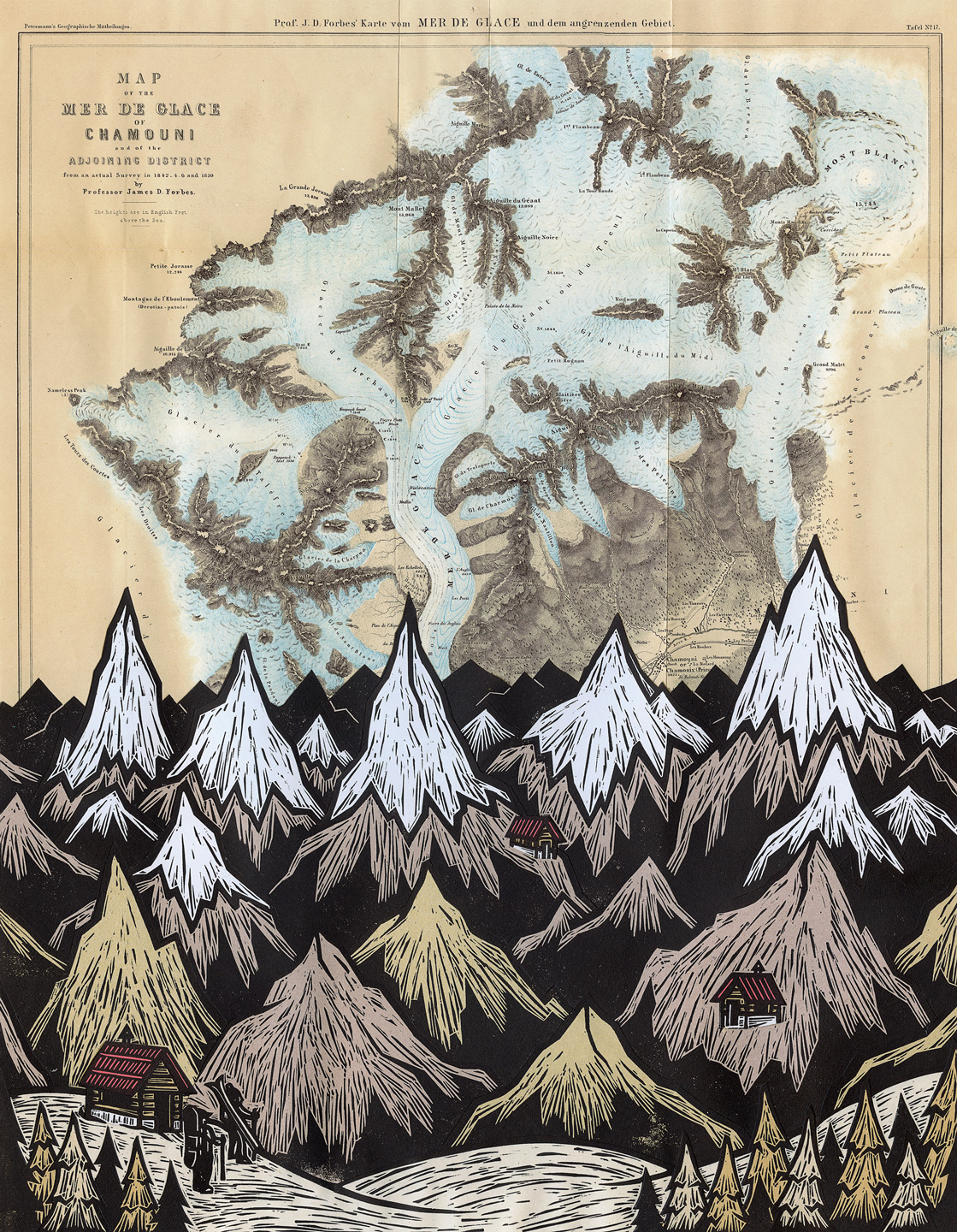 above The alpine history in the Alps is incredible. Huts and cabins are everywhere, which makes going on all-time adventures that much easier. I worked on sketches for this piece—the “Mer de Glace”—until I had it perfect, and then went about trying to track down the perfect map for a background. I found one of the Chamonix Valley from 1855, and it brought the piece together. 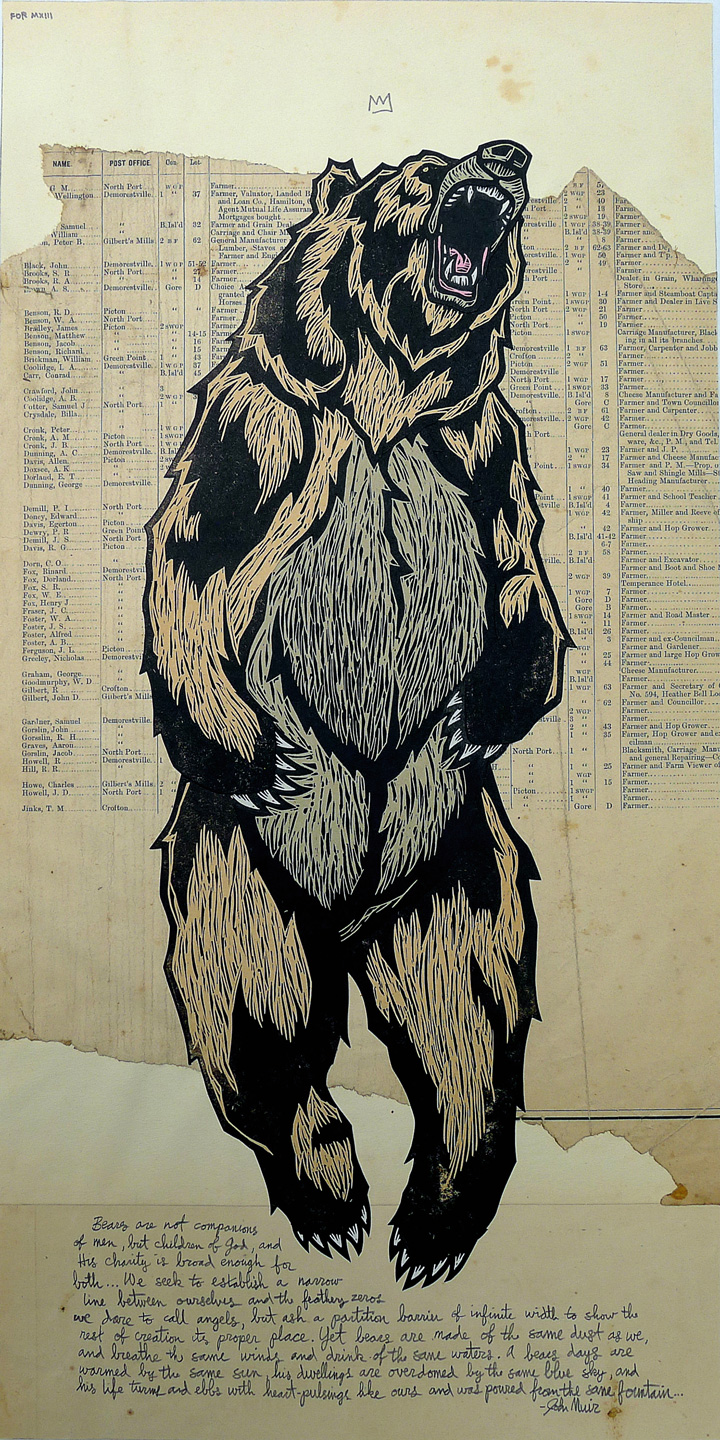 above In 2013, the Swiss government killed the last wild brown bear known to be living in the country. He was deemed a risk to human safety, and proved impossible to keep away from humans. It is incredibly sad to think about a country having to get rid of the last of a species, even if it is for safety reasons. This piece was created in honor of M13 (the official name of the bear). 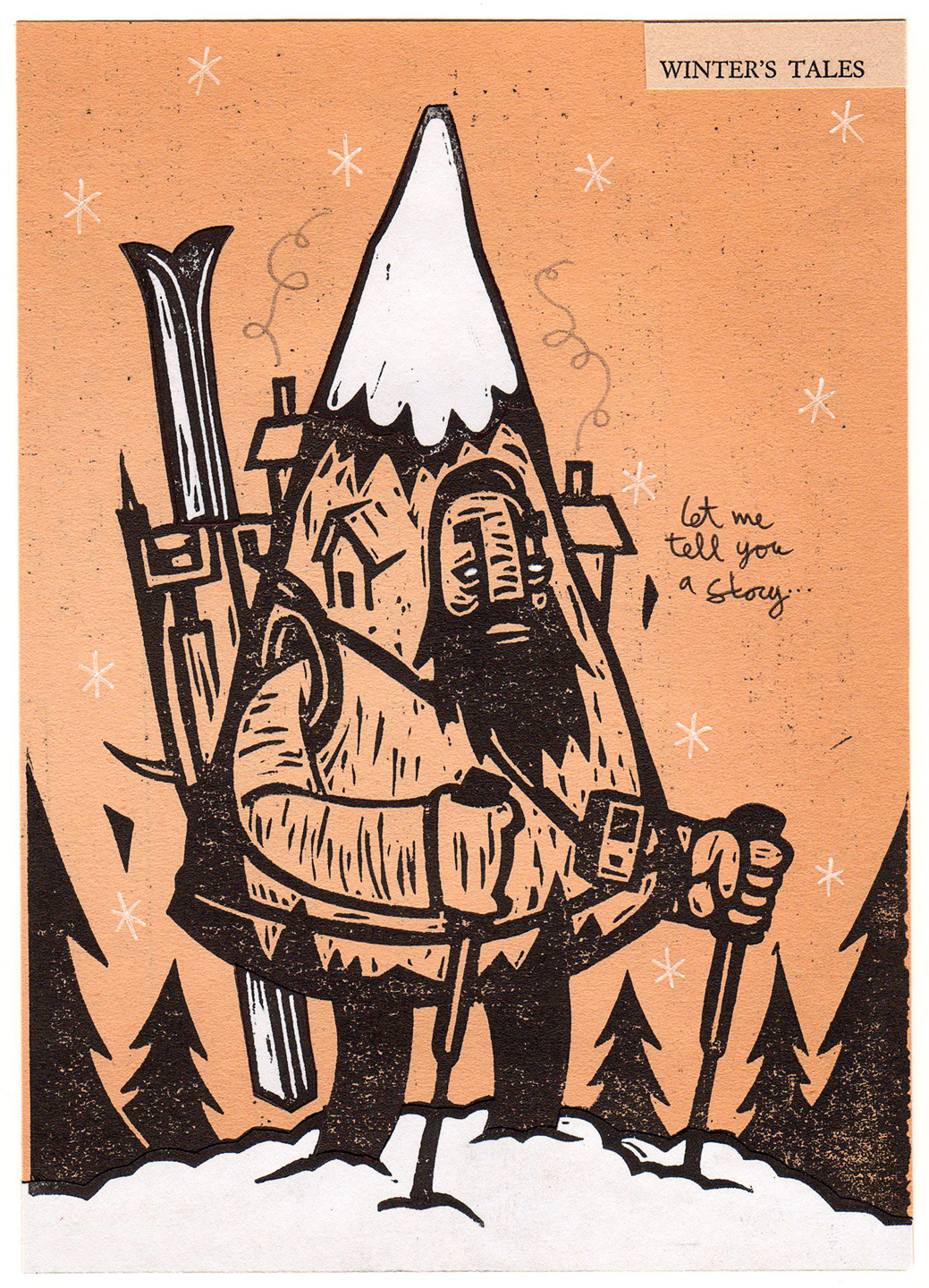 above Mixing my go-to bearded guy and my love of mountains. The old man is heading out into the backcountry, and is ready to pass his wisdom and tales on to anyone that will listen. And oh boy, does he have tales.

above top For our honeymoon, I convinced my wife to go skiing at Las Leñas in Argentina. Unfortunately, we showed up to one of the worst snow packs in 10 years, but it was still a remarkable place that really sticks with you. I used to create a lot of work using vintage airmail envelopes, and while we were in Buenos Aires I found a ton of old Argentinian ones; it only seemed right to memorialize the experience.

above bottom While spending a summer in Gimmelwald, Switzerland, a good friend of mine was doing some mountaineering around the area which included climbing the 13,642-foot Jungfrau. The work on each of my airmail pieces relates back to the envelope’s country of origin, and I created this to represent my friend’s Swiss adventures.

This gallerie originally appeared in The Ski Journal Volume 9 Issue 4.