ABOVE: Henrik Harlaut used uncut poles to push into this feature at High 1 Resort, South Korea. It was in a park outside our hotel and it took him about five minutes to get the shot.
Here’s something to never say at a job interview: “Can we pop by an emergency room?”

But it’s a question Josh Bishop had to ask. The 22-year-old skier had a rubber earbud lodged in his right lobe and it hurt like hell.

“The thing was fully stuck in there,” he says. “I couldn’t see it at all when I was looking at my ear in the mirror. But if I pressed that space between my jaw and lymph nodes, I could feel the rubber compressing.”

You may be asking how this happens to someone. Valid question. This is how: When you get a last-minute invite to interview for the team manager position at Armada Skis, and you fly from Colorado to California in a snowstorm, and you put together a presentation for the interview, and your computer crashes, and you put together the presentation again very late at night, it’s easy to fall asleep with headphones in your ears. And when you fall asleep with headphones in your ears, it’s easy for a little rubber casing to detach and lodge itself inside your head. 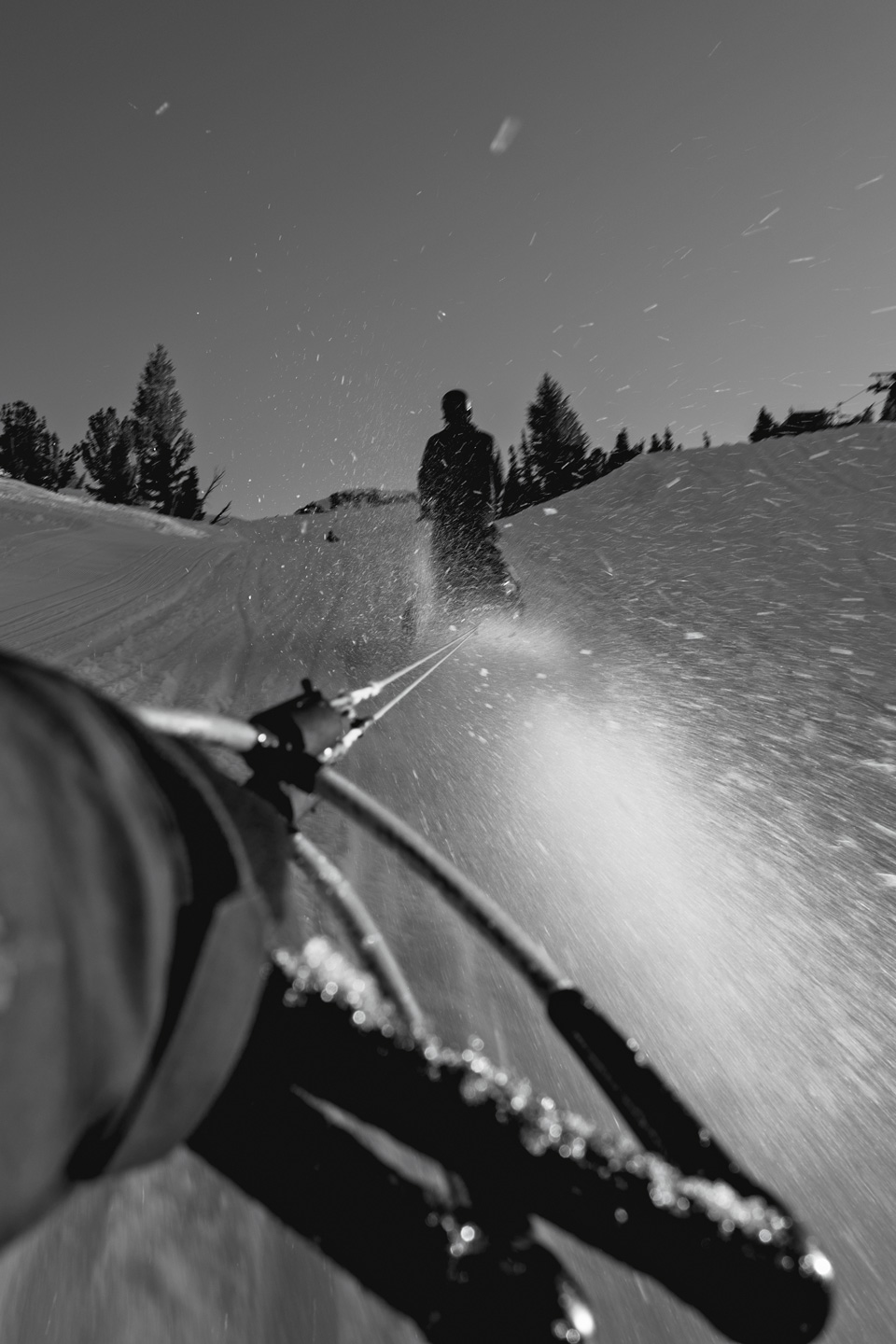 above A high-energy shoot with Level 1 in Mammoth Mountain, CA. I love capturing movement in my work and I wanted to emulate the athletes’ point of view.

Nonetheless, Bishop got through the interview without anyone realizing what was going on. And the crew really liked him. For starters, they knew he was a ripping skier. A product of New Hampshire’s icy, lake-facing slopes, Bishop cruised with OGs like Kevin and Brady Perron at Mount Sunapee, where they’d lap the park and bomb the mountain’s entirety without turning. When he went to college in Colorado, he ingrained himself in the exploding park scene and grew close with local legends like Pat Goodnough, Matt Walker and Andrew Hathaway.

Bishop also had a real knack for marketing and photography, which blossomed through a job at Surface Skis. He was clearly hungry for the position with Armada. At that time of his interview, he only had a Jeep, a couple of suitcases and about $200 of borrowed gas money to his name. So, the guys from Armada took him to the ER then they hired him. 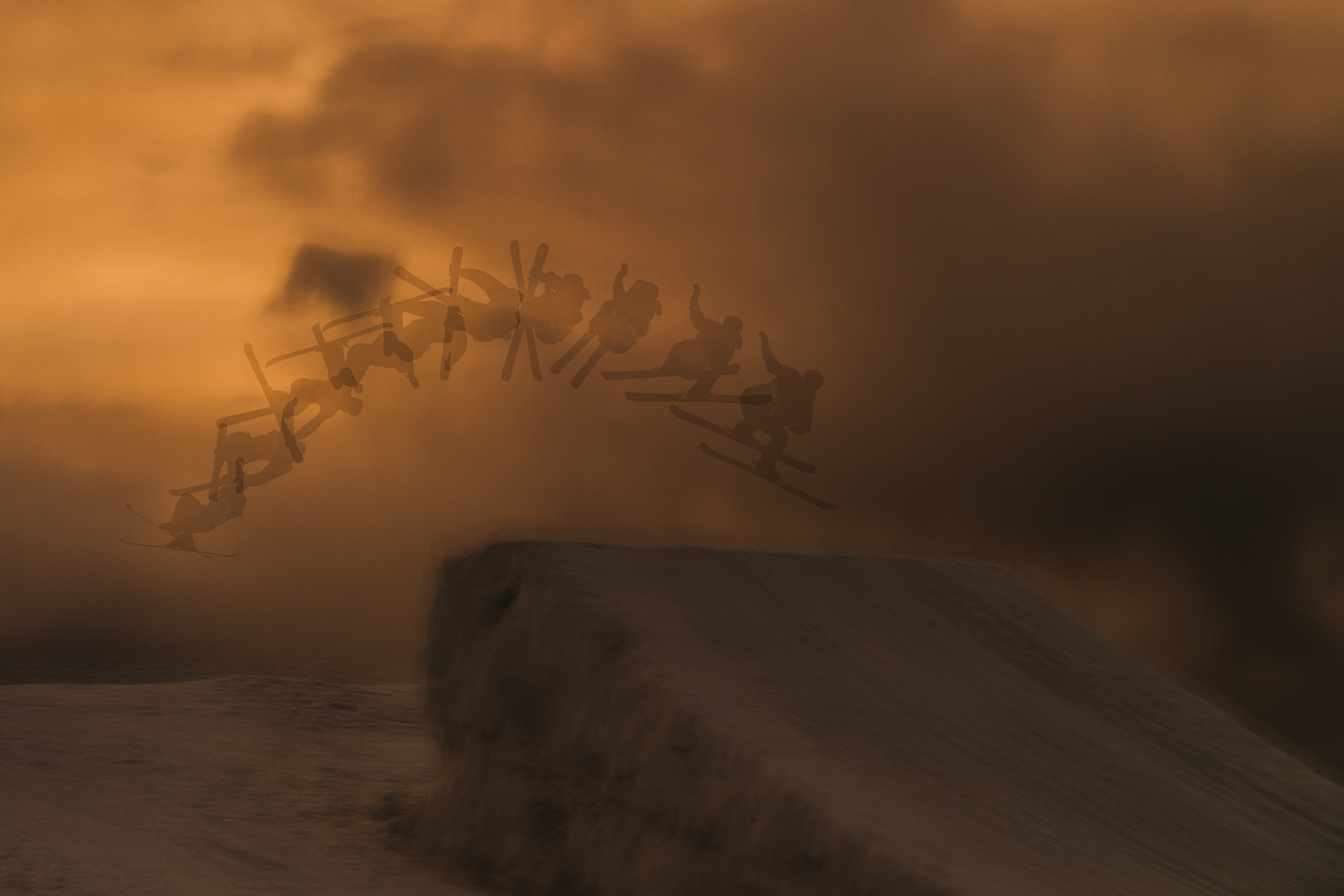 above In-camera multiple exposure of the event founder himself, Kim Boberg, at Kimbosessions, Kläppen, Sweden.

“Bishop is highly intelligent, quiet and reserved. Yet he’s full of confidence and has a snarky sense of humor,” Armada General Manager Hans Smith says. “He can fuck with the best of them. And I don’t mean that in a bad way, but an advantageous way. As a team manager, you’re dealing with a lot of big personalities and he’s got the right demeanor to adjust his approach to the person he’s working with, whether that’s on a personal level or a working level.”

Bishop made an impact at Armada almost immediately. Although it wasn’t technically part of his job, he was shooting photos all the time and blowing everyone away with both action and lifestyle shots. Meanwhile, he genuinely connected with the team—skiers such as Tanner Hall and Phil Casabon—and understood their needs. He was also looking ahead. During his first summer on the job, Bishop helped bring Swedish phenom Henrik Harlaut onto the team—he would go on to be one of Armada’s most impactful and dedicated skiers. Respect from legends like pioneering street skier Mike Hornbeck poured in right away. 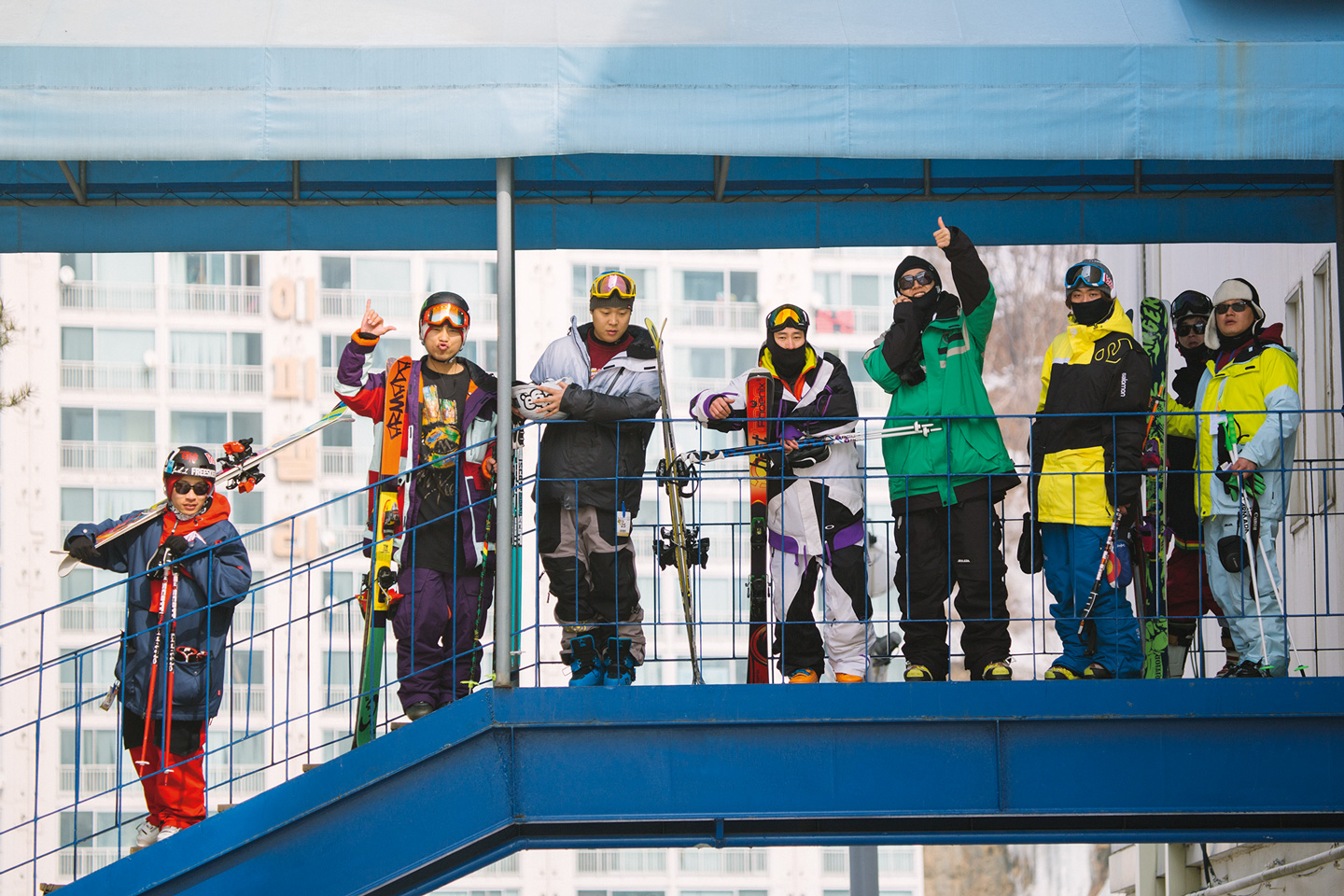 above Phil Casabon, Henrik Harlaut, Torin Yater-Wallace and Mike Hornbeck did a team trip to South Korea. To this day all of us have absurd stories and untold memories from two weeks embedded there. There are roadways with grooves that play music when driving the speed limit, the proximity to the DMZ and the historical weight of North Korea hangs in the air, and the contrast between ancient and technologically advanced cultures walk in tandem amidst overdeveloped cities. 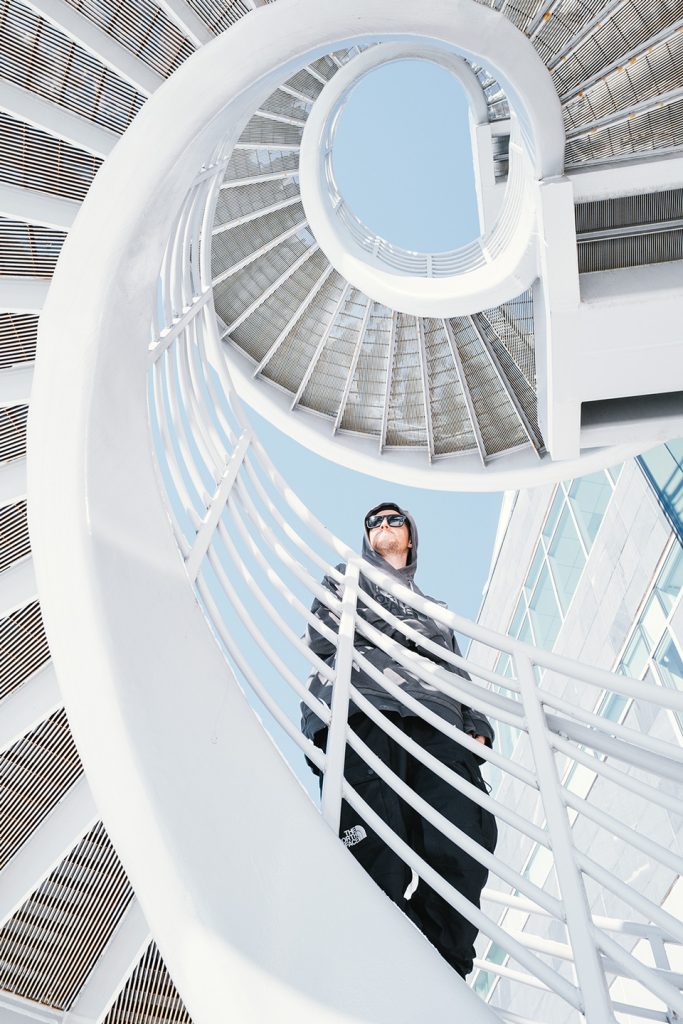 above There was a heat wave of -10﹉F on this day in Duluth, MN. Tom Wallisch found a spiral rail on Google Earth and decided it was his childhood dream to slide it. See the cover of this issue for the action shot.

above left to right (click to enlarge)
I’ve worked with Oliver Karlberg a few years now on various shoots and he’s so open and willing to try anything and incredibly patient as well. He’ll be the guy out skiing at 11 p.m., shooting the blue hour in the Swedish twilight—seen here in Kläppen, Sweden.

Located between Wanaka and Queenstown, New Zealand, Cardrona sits in a valley flanked with terrain parks on one side and cross-country ski trails on the other. What was once the epicenter of the 1860s gold rush has since become better known as some of the Southern Hemisphere’s best park skiing.

“[Bishop] was just so involved,” Hornbeck says. “He wasn’t the team manager who had no clue what you were thinking—not some guy telling you what to do from Austria. He was right there, on all the trips with the crew. Hanging out, shooting photos, getting drunk with us. And he’s super intelligent. I feel like he’s so smart that sometimes he has to play dumb to fit in with all us delinquents.”

But it went beyond all that. Bishop’s high level of consideration trickled down to trying to fulfill the team’s unique collection of dreams. For Hornbeck, the dream was to find funding for a lofty list of street missions and video projects—missions and projects most team managers would cut out of their budgets.

“[Bishop] just knows skiing,” Hornbeck says. “He’s a ski nerd when it comes down to it. He’s got so much passion, he liked what I was doing, he saw that I was going to work hard. I can see the higher-ups in those Armada meetings asking, ‘Are we going to spend money on this fucking guy in Michigan skiing handrails?’ And Bishop just being like, ‘Fuck yeah, we are!’” 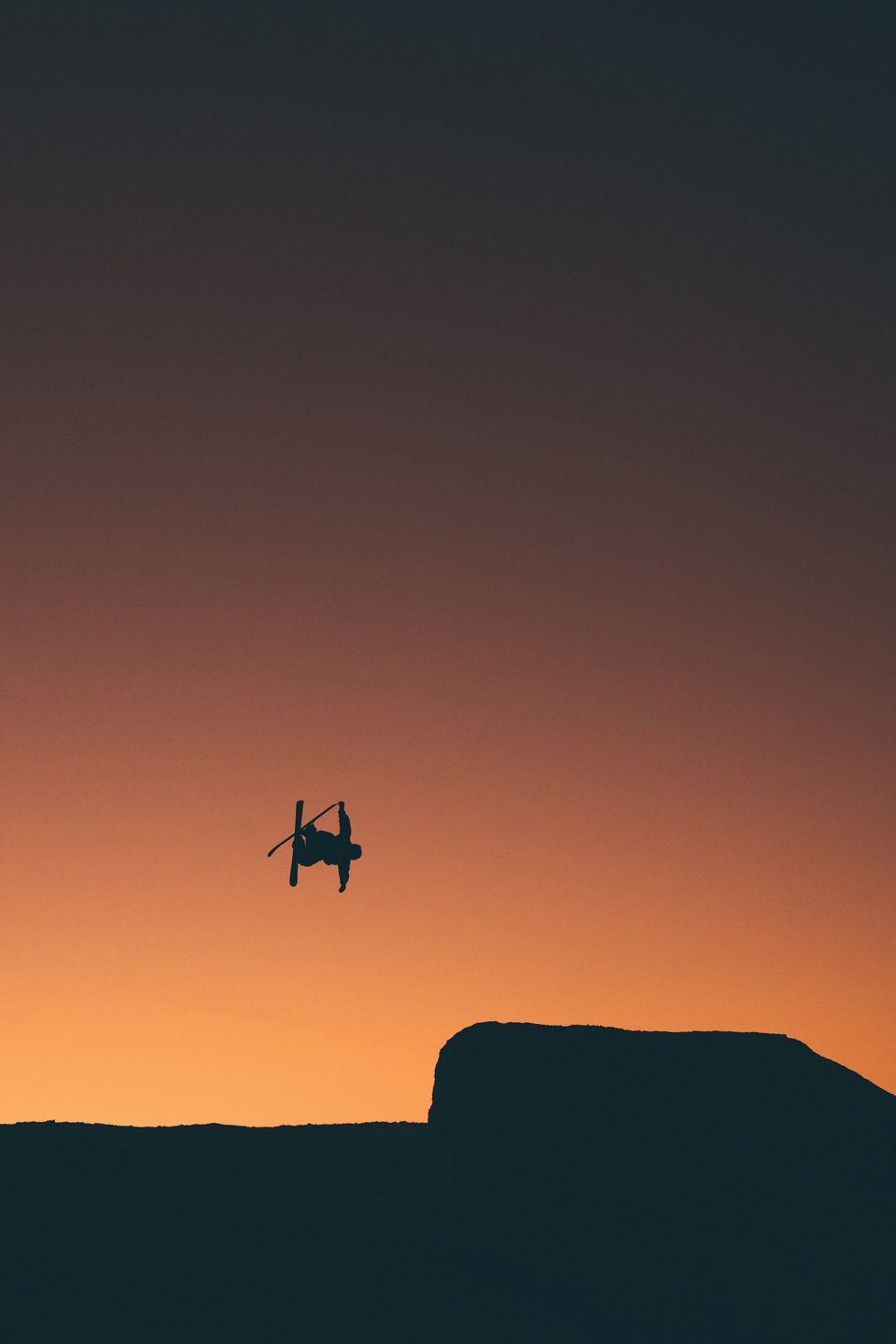 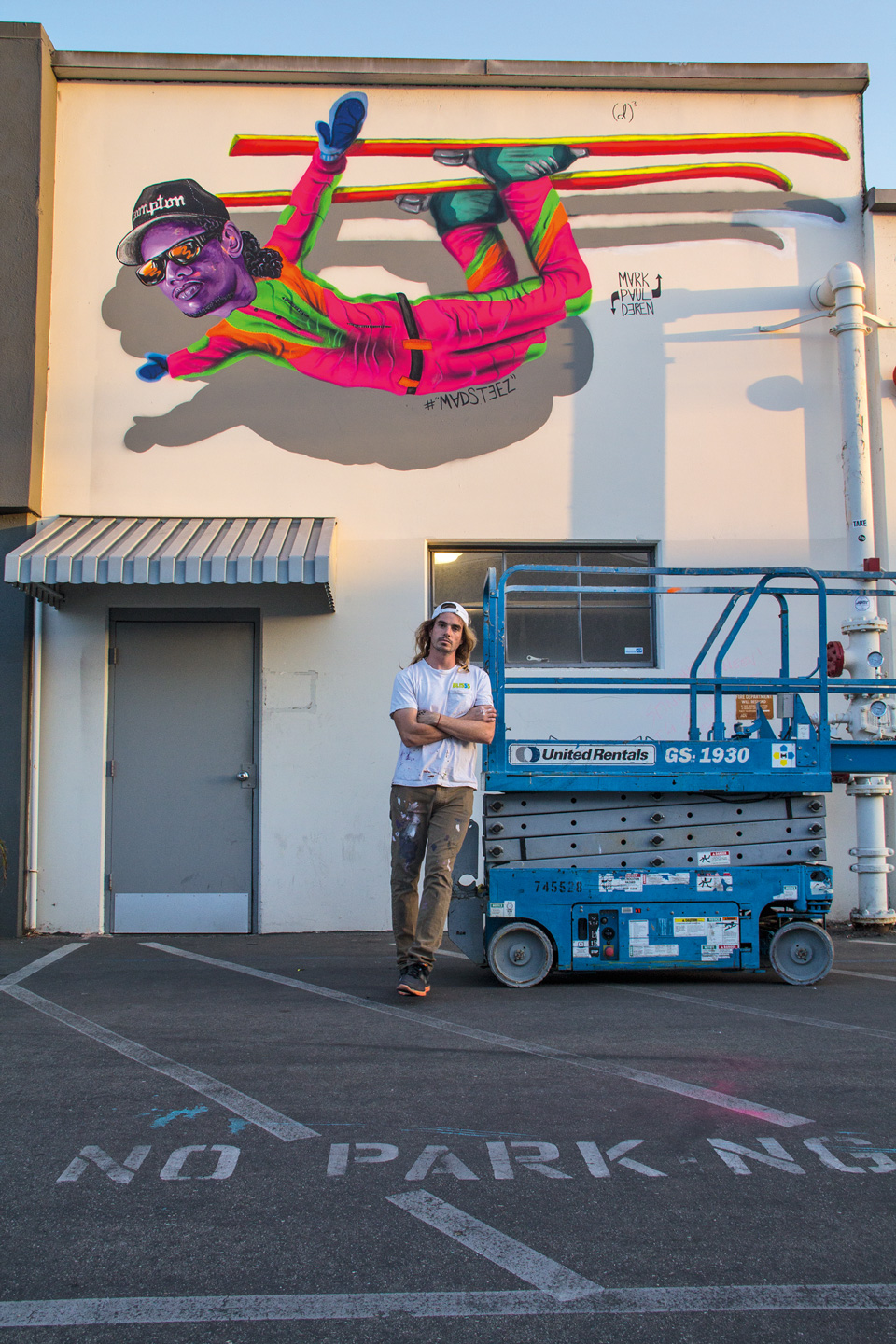 above top to bottom
Henrik Harlaut is the master of internal dialogue. I’ve seen him try the same trick from 8am to 2am without showing any dissatisfaction or anger. It’s as though he removes himself from the process, objectively watches each trick, makes subtle adjustments, and tries again. He can perform under so many different circumstances it’s truly astounding. This photo was taken well after 10pm in late May during a classic Swedish sunset at Kimbosessions. Ambient light is endless at the 61st parallel and he didn’t stop jumping until it was nearly pitch black.

Mark Paul Deren, the artist known as Madsteez, painted Eazy-E doing a backflip over the awning at the Armada office in Costa Mesa, CA back in 2012. It took him about four days to complete. He is a brilliant artist and was based about a mile from Armada for 15 years before moving to Brooklyn, NY.

Around 2014, changes at Armada began brewing, largely due to financial turbulence, as has been the case for  many dedicated ski brands trying to find a balance between staying profitable and keeping it real. The company would eventually sell to sporting-goods giant Amer Sports—parent company to brands such as Salomon, Atomic and Arc’teryx—and move its headquarters from California to Utah. But that was just the tip of the iceberg of a difficult time for Bishop.

“It was a really crazy portion of my life,” Bishop says. “That fall of 2014, my mom died from cancer. Three weeks later, JP [Auclair] died in an avalanche. Maybe three to five weeks after that, I got the news that Armada was moving to Utah. You can look at Armada like it was just a job, but for me it was so much more than that. Armada was so wrapped up in my identity and what I wanted to be since I was a kid. I would watch Tanner and JP in films every day before school and, suddenly, I was working for the brand they co-owned and got to travel and ski with them and shoot photos of them. I just knew that was the coolest thing I could’ve been doing with my life.” 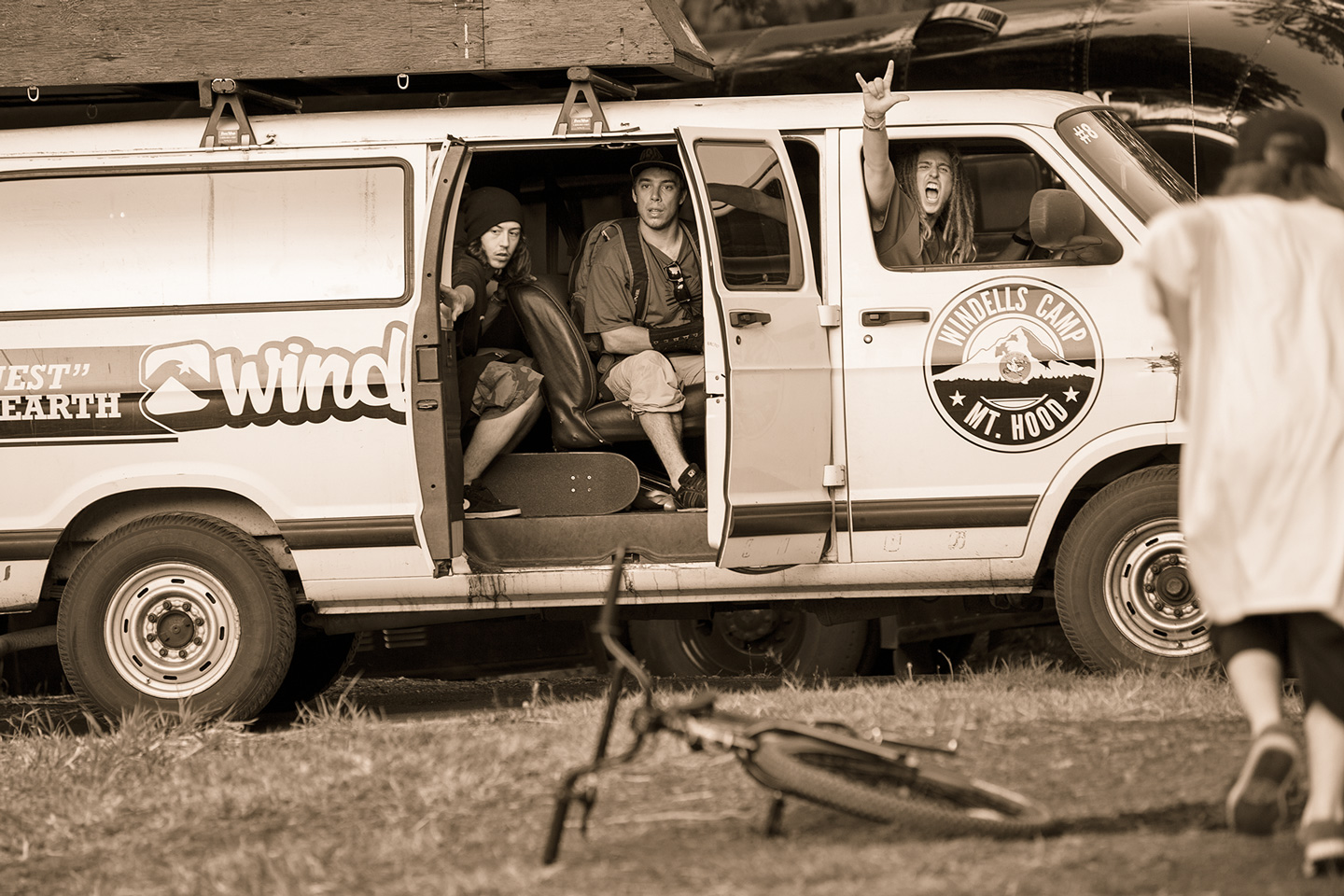 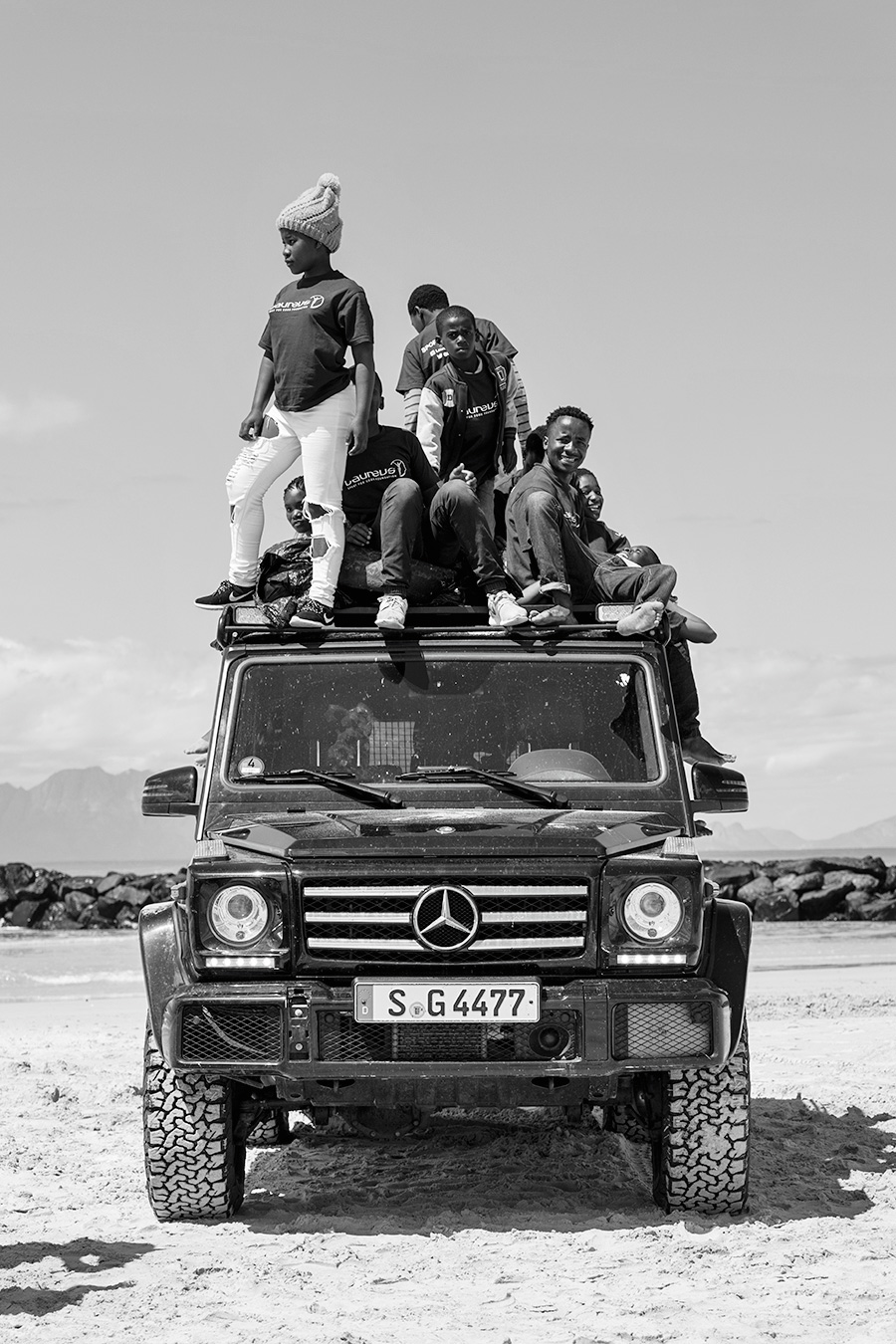 above top to bottom
Henrik Harlaut, Brady Perron, Paul Bergeron and Emil Bergeron at Windell’s on Mt. Hood, OR, circa 2013. Windell’s has a magical appeal. There’s still something sacred about Mt. Hood after all these years and the energy at that place is palpable.

Shark tagging aboard the Pangea research vessel, South African coast, 2016. We caught the largest sevengill shark ever recorded on this trip. Scientists made an incision, inserted a tracking device, and stitched the shark back up before release. The data then went into a larger research pool to track species health and better understand our friends in the ocean.

Mike Horn, widely regarded as one of the world’s greatest explorers, encouraged all the township kids to play on his G-Wagen during a beach cleanup day in Cape Town, South Africa, circa 2016. Mike has swum the Amazon alone, circumnavigated the globe without motors at the equator, and is currently ski touring across the North Pole. I took this shot before anyone moved—all completely unposed and in awe of the vehicle. After our time in Cape Town, Mike sailed to Antarctica and ski toured across the continent solo. He’s easily the gnarliest human being I’ve ever spent time with.

Bishop ultimately made the difficult decision to stay in California and figure out life all over again. He knew he had the marketing expertise to succeed in new ways. He also had become an exceptional photographer with growing recognition. Bishop’s images stood out significantly in action sports; his quiet, accommodating personality allowed him to capture a more personal side of skiing and life in general. With these skills in tow, he approached as many companies and individuals as possible, and also began hustling as a freelancer.

“I would see that a job was listed online and try to apply for it,” he says. “If they showed interest, I’d say, ‘Great, so what do you guys really need? Do you need a full-time employee to do all of this? Because if you have a problem, I can provide a solution on a freelance basis.’”

Owing to his hustle, Bishop began working with Monster Energy to photograph major events in the ski sphere such as the X Games and Dew Tour. He saw himself staying with the brand on a more permanent basis and, as time went on, that desire became reality. Today, he’s the Global Category Manager of Monster’s ski division, managing some of the best athletes on Earth and traveling alongside them. 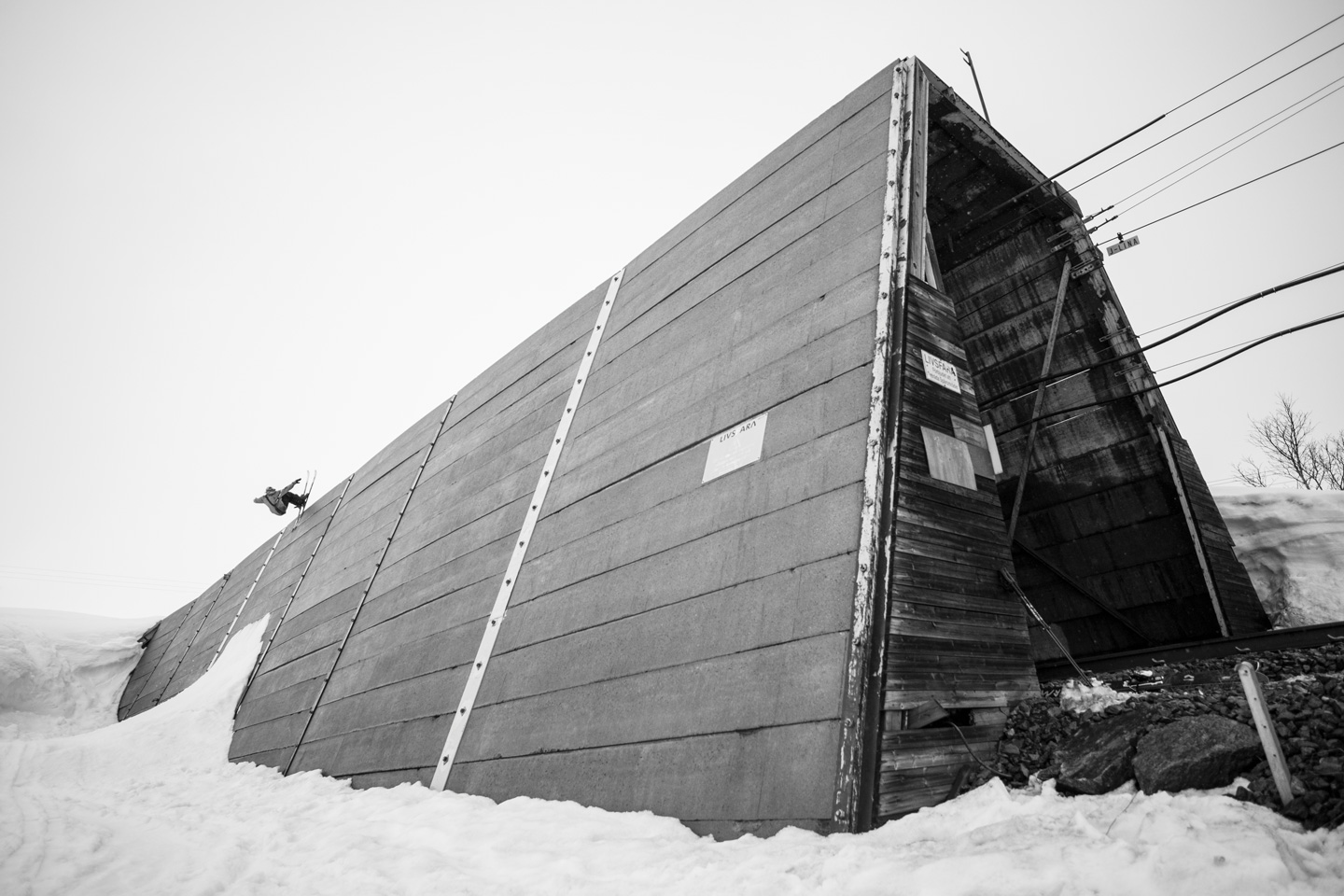 above We hiked the classic Riksgränsen wall for hours in the pouring rain. Par “Peyben” Hagglund is an artist, team leader, and genuine creative. Skiing is one of his many pursuits and he’s an equally gifted director and cinematographer. He’s one of those guys you only see once a year and feel like zero time has passed.

“It’s pretty amazing to understand what an energy drink sponsor really means to these athletes,” he says, now 34 years old and based in Newport, CA. “It gives them support and serious help in the field. I feel super fortunate to be a part of that support and I’m very proud of the work we do.”

Bishop’s quiet, confident personality continues to serve him well. He instills trust and comfort in those who surround him. He looks at situations intellectually and creatively. He loves skiing right down to its core. Above all, he keeps going when the going gets tough—whether that means losing a loved one or leaving a dream job.

Or just losing an earbud in his head.

This article first appeared in The Ski Journal Issue 13.3.