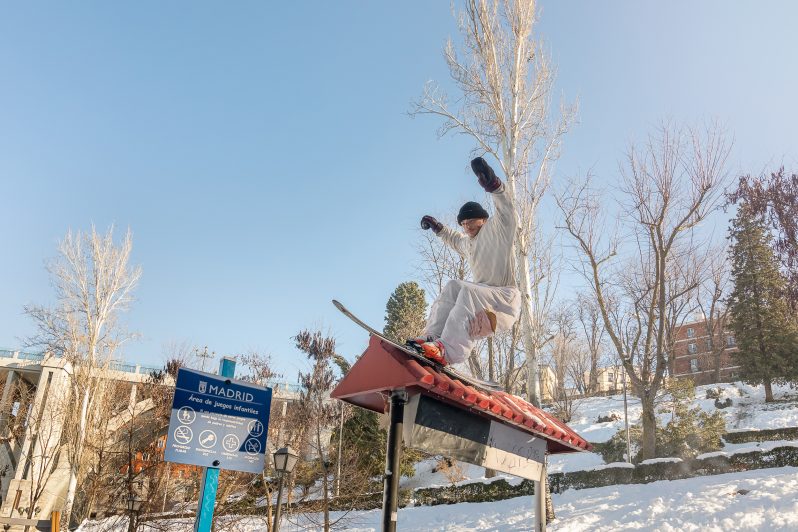 Jonás Bel was a few blocks from his apartment when he heard the unmistakable sound of skis cutting across frozen granular. It had to be a mistake, right? This was Madrid, the landlocked Spanish capital far from anything worth skiing, and typically miles from anything resembling snow. But this was no typical day. Over the past 36 hours the city had been pummeled by a rare winter storm, receiving nearly 30 inches of snow and grinding to a creaking halt. In the multiple decades Bel had called Madrid home, he’d never seen snow like this. They were calling it a 50-year storm, but the octogenarians from nearby buildings said they’d never seen anything like it in their lifetime.

It was as if the city, which had been under a strict second COVID lockdown, had taken a collective breath of cold, winter air. Madrileños poured into the streets, making snow angels on sidewalks, building snowmen in plazas, and throwing snowballs at neighbors. Without a doubt, it went against the province’s strict stay-at-home order, but the communal release of pent up anxiety and stress had, if ever so briefly, given the metropolis a new, almost childlike, vibrancy.

And then, skis. Bel had been on his way to the family car, checking to see if the tree that had fallen nearby had crashed through the roof or merely grazed the trunk, when he heard them. Rounding the corner, his eyes completed the puzzle, as three strangely dressed men took turns launching the stair set that wound its way up the Jardin de las Vistillas. With views of Spain’s royal palace and the national cathedral, La Almudena, the stairs were normally peppered with young students enjoying beers in the late day sun, but on this the stone path is a collection of ramps, lips, and jumps. 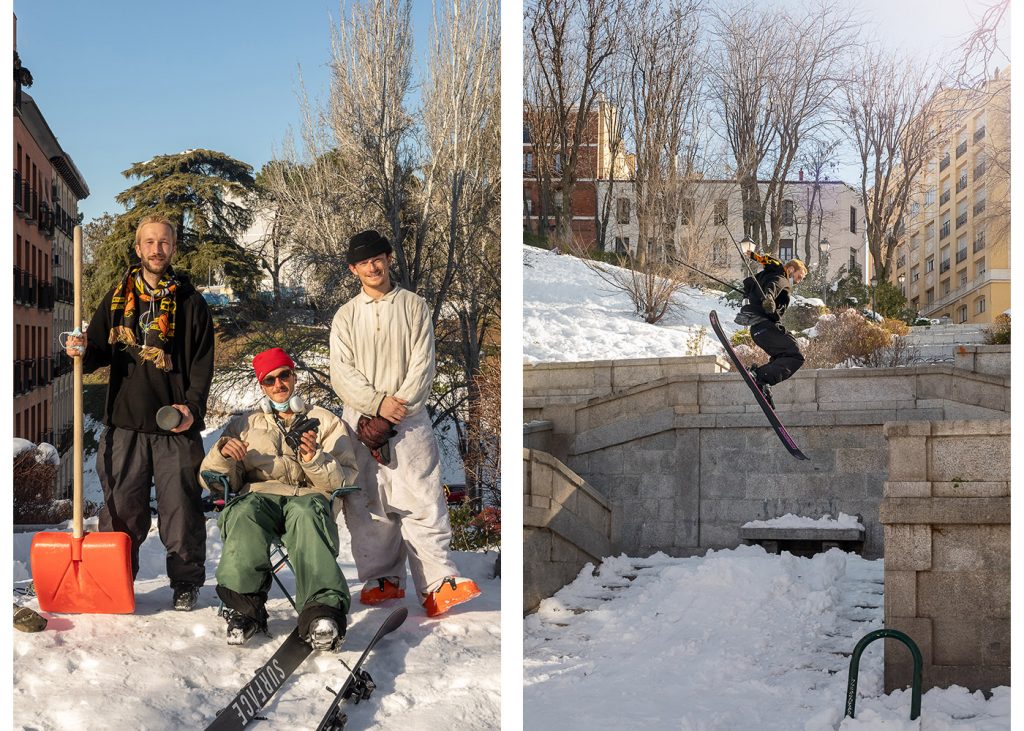 ABOVE When Spain got a once-in-a-lifetime storm this January, Remco Kaiser, Gilles Tinguely, and Yohan Lovey—of Level 1 fame—hit the snowy streets of Madrid. Photo: Jonás Bel

He’d never seen his neighborhood like this, nor had he seen anyone like, well, them. The skiers wore baggy pants, bright mittens, and strangely perched beanies. They weren’t using poles and instead of carving traditional pistes like the many images he’d seen in travel magazines at corner newsstands, these skiers ran their tools over metal, concrete, rock, wood, and plastic. Unlike the bundled masses that looked lost in the overnight winter wonderland, these men looked very much at home, though their thick accents assured that they were far from it.

Picking up a few words of French, Bel tried his luck with the crew. He assumed the trio are study abroad students, but after a fumbling back and forth across the linguistic divide, learned they were actually from Switzerland, and drove 15 hours through the night to see this historic Madrid snowfall with their own eyes. On the way, they’d pored over Google Street to try and find the best spots to ski and film for an upcoming movie project. Remco Kaiser, Gilles Tinguely, and Yohan Lovey were pro skiers heavily involved in the urban ski and park skiing scene in Europe, but their niche celebrity status hadn’t crossed over into Iberia. They said instead they’d spent the day assuring passerbys not to worry, that they knew what they were doing—explanations that had been met almost entirely with confused looks and shrugged shoulders. They seemed relieved to talk to someone, anyone.

Still mesmerized, Bel, a photographer by trade, began snapping photos as they dropped the stairset lap after lap. Tail presses. Wall rides. Tweaked 180s. Why didn’t he think to bring his larger camera? He steadied himself and prepped for the next shot. How strange, he thought, to be from such vastly different walks of life, and enjoy this unique collision of worlds. It still didn’t make much sense, this ski-the-city thing, but he admired their determination. The snow had done this—brought these people together to create something new in a place that, in his mind, had long exhausted its surprises. A look at the watch. Time to go. He exchanged numbers and made his way back to the street, in search of the car buried beneath a fresh coat of possibility.