ABOVE: A migratory horseman—noble, brave, generous and also one who is skillful in subtle tricks and crafty… according to Wikipedia. Complete with traditional boina hat and poncho, Eleven Experience guide Alan Bernholtz embodies the Patagonian cowboy spirit.

Immediately after touching down in Chaitén, Chile, the stories began. Host and fishing guide Juan Carlos Castaing rode shotgun in the van en route to Rio Palena Lodge and pointed out a mile or more expanse of what looked like gravel, atop what was a village until 2008. Chaitén volcano, the culprit in the village’s demise, still released small but intimidating plumes as we drove past.

Continuing down the road past hanging glaciers, clear blue waters and rainforests blooming with life, Juan Carlos told stories that blurred the line between myth and reality. Our current situation blurred that line in my mind—it was hard to believe we were going on a pioneering heli-ski trip in northern Patagonia, in November, to ski previously unridden lines. It was a stark contrast to the muted grays and browns of the post-autumn Northern Hemisphere. 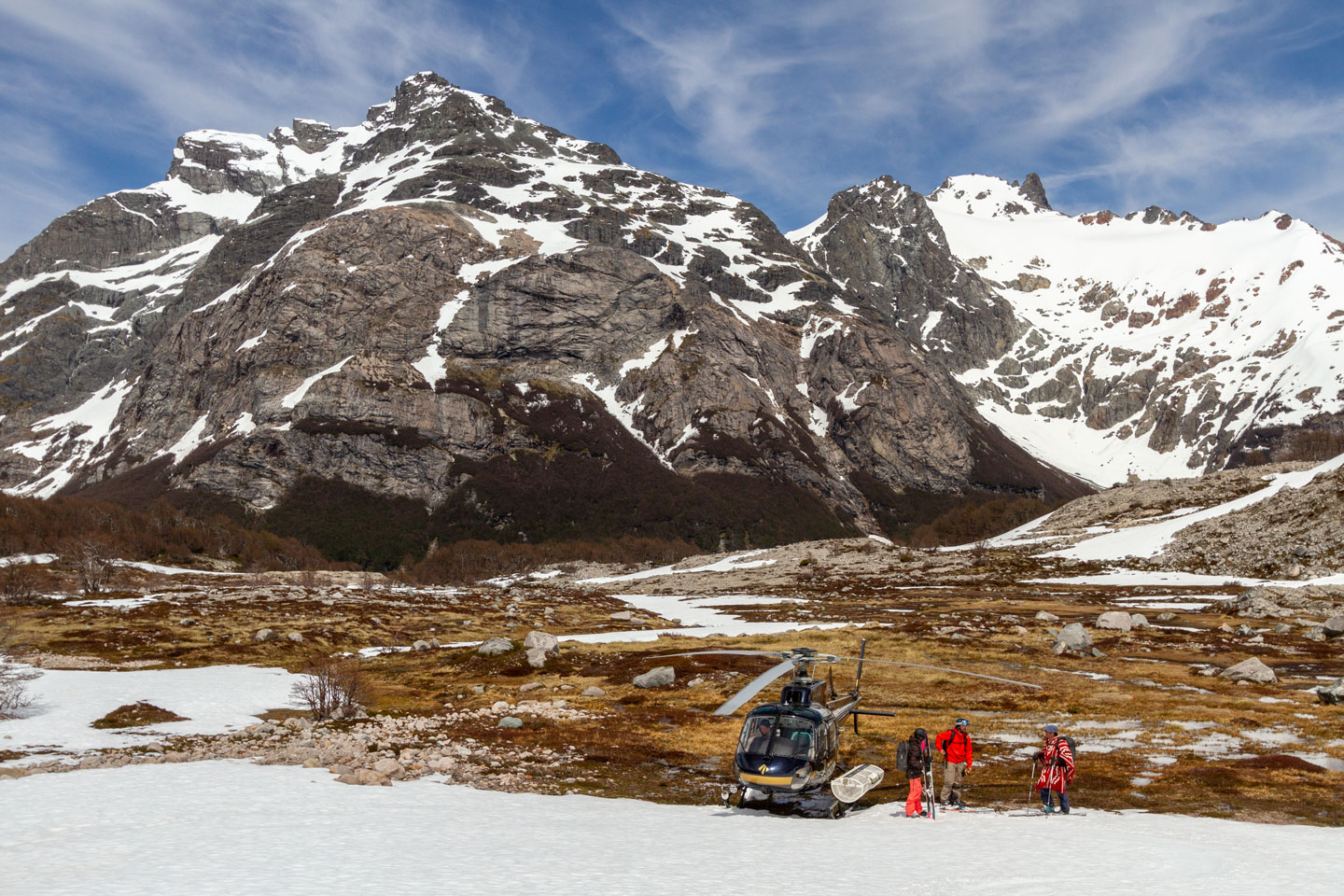 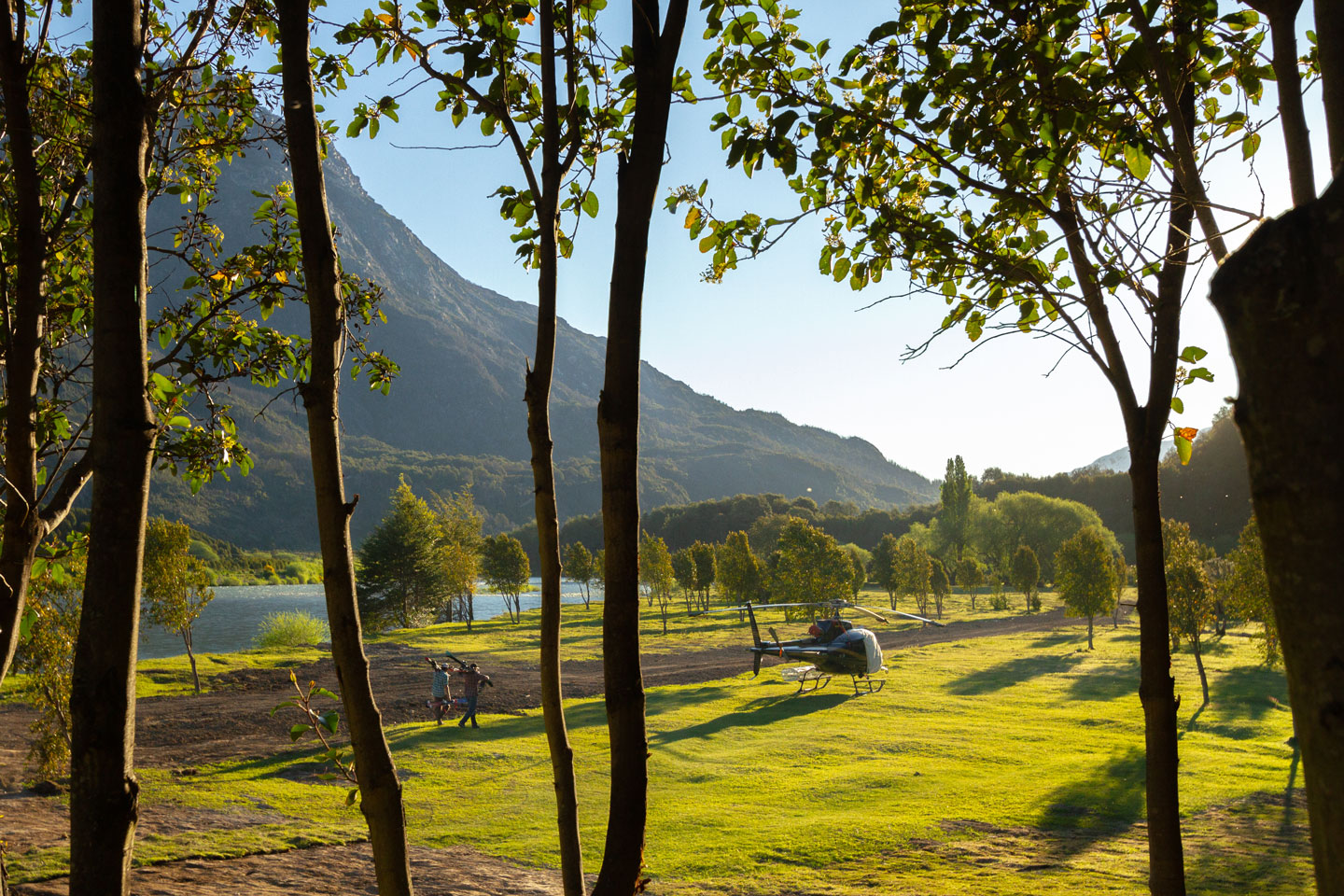 above TOP TO BOTTOM
Alyssa Seemann, Drew Daly, and Alan Bernholtz
prepare to board the aircraft. Photo: Andrew Marshall

It’s lit. But “classy” or “incredible” might also be accurate. The newly-remodeled Rio Palena Lodge on a fresh spring night, with piscos and Carignan at the ready and Grateful Dead on the speakers. It was completed in 2019 and opened that November for fishing––the week after we left. The heli ski season is open for reservations beginning in October 2020. Photo: Crystal Sagan

The lodge is located on the lush banks of the Rio Palena, a 150-mile flow beginning in Lake Vintter along the border between Chile and Argentina and emptying into the Gulf of Corcovado. Surrounded by waterfalls, dense forest, and lofty alpine peaks, the property provides quick access to skiing, fishing, hiking, and rafting with potential for a whole lot more. Looking out on the freshly landscaped yard, Alan and Drew prep equipment for the following day, just a few steps from the door. Photo: Andrew Marshall

Arriving at the lodge, lead ski guide Alan Bernholtz suggested that if we couldn’t ski due to weather, perhaps we’d like to prep a local eagle carcass for mounting above the bar. While my travel companions, Alyssa Seemann and Crystal Sagan, and I laughed nervously, Alan made it clear that while we wouldn’t be partaking in taxidermy 101, he did have a large bird in the freezer at home. It was the impetus for naming one of the new ski runs he and fellow guide Drew Daly had developed over the past several months. They’d named it Electric Eagle. The remainder of the story about how they obtained the bird seemed outlandish but was a true homage to the condor’s place as king of the South American sky. Soaring solo near 10,000 feet in the high alpine, the bird literally does not move for anything, not even a helicopter. 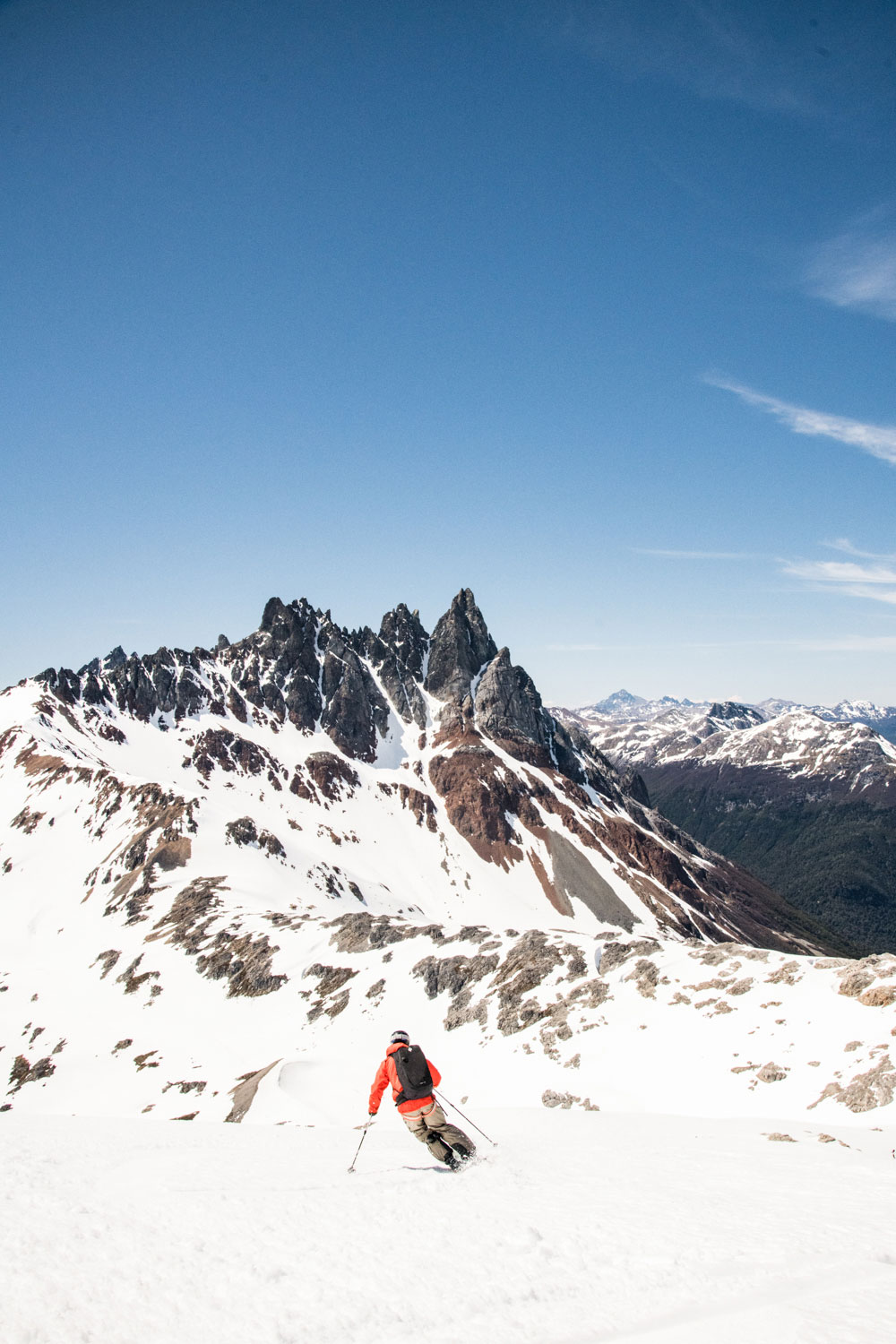 ABOVE Drew Daly making the third or fourth descent of one of 90 or so newly named runs in the region. After himself, Alan, and the Eleven Experience owners, the next few descents are now open for booking. Photo: Crystal Sagan

above clockwise from top left
Ski guide Drew Daly also works as a patroller at Sun Valley and is a certified AMGA/IFMGA guide at Sawtooth Mountain Guides in Stanley, ID. He also pitches a mean game of cornhole. We experienced his wrath one afternoon during a riverside cook out on the Futaleufú. Photo: Andrew Marshall

Our helicopter pilot for the week, Christian. An ex-Chilean Navy pilot, most likely not the one who infamously captured the UFO footage in 2014, but this week he provided a stellar experience of his own. Photo: Andrew Marshall

Alyssa Seemann, from Whitefish, MT is the founder of Revelry Experience marketing agency. She may have come away with an addiction to Merken, a traditional Chilean spice made from smoked peppers, coriander seed, and salt. It’s traditionally found at most meals and common on everything from goat cheese to ceviche to mixed drinks. Photo: Andrew Marshall

Lead guide Alan Bernholtz probably thinking about the time he skied Metorite Peak on tele skis as part of his AMGA exam. Or preparing his next joke. Alan is a legend in Crested Butte, CO and the heli ski community. To spend time learning (facts and jokes) from him was an experience in itself. Photo: Andrew Marshall

Alyssa and Alan outside of the helicopter in between portraits. With only three guests and two ski guides, we had plenty of time to get acquainted and were basically hosted like family. No fun was had at all, clearly. Photo: Andrew Marshall

Crystal Sagan on a down-day hike through the jungle to a 500-foot waterfall. Mystique with an extra side of mist… and mud. Photo: Andrew Marshall

Fishing guide Arturo Saffores provided a variety of streamer options for the native brown and rainbow trout. We fished the Rio Palena as well as the Futaleufú, landing colorful memories on both––although the orange streamer proved more memorable than the green. Photo: Andrew Marshall

Alan told us tales of a stream so clear the fish in it adapted to have translucent tails. Being the former mayor of Crested Butte and a world-renowned heli guide, he hosted us like a pro for three days and mixed folklore with wisdom better than 10 out of 10 politicians ever could.

On the last morning Drew pulled up a GIS app on his computer and showed me the 90 or so named runs they had mapped, and a region they had not yet scouted in full. It started to sink in that we were just scratching the surface of what was possible. Circling landing zones in the heli and gaining a condor’s angle over thousands of feet of perfect corn skiing peppered with waterfalls, exposed ice and massive cliffs fronted by dense forest to the valley floor helped put our diminutive size into perspective.

above left to right
Arturo manning the jet-powered drift boat during an hour of sunlight in between rainstorms and wind. A variety of weather made our visit all the more adventurous and the jet boats provided a fast way to cover a lot of water in a short amount of time. Photo: Andrew Marshall

Decisions, decisions. Crystal Sagan makes a quick change from ski boots to wading boots. It’s an easy choice when there’s time for both. With sun in the morning and wind up high in the afternoon, fishing in the same day was a sweet alternative to late day skiing. Photo: Andrew Marshall

Accessing both skiing and fishing by helicopter made the transitions even quicker. When the clouds came in, the waders got pulled out. The lodge is stocked with everything else necessary for a multisport day. Crystal Sagan caught in the in between. Photo: Andrew Marshall

Before we’d left for the trip, I’d asked Alan what the plan was in case of an emergency. “We hunker down and wait for a rescue,” he said. I found it hard to imagine we couldn’t skin or hike to a trailhead in a day or two, but looking back I now understand the naivté of my question. It made me wonder if Patagonia really is the embodiment of modern mystique. We peered from multiple airborne angles into massifs stacked with couloirs that would be iconic in most mountain ranges. There, they are unnamed and almost guaranteed to be unskied, and there’s usually more of them one ridge over, and the ridge after that, and as far as the eye can see after that. While they might look obtainable on a map, they are so remote I can’t imagine too many people will ever know them during my lifetime.

One thing’s for certain: The rugged terrain of northern Patagonia is no longer a myth to me. There are tangible, touchable lines, waiting for those committed or lucky enough to make the journey into the deepest reaches of the Andes. 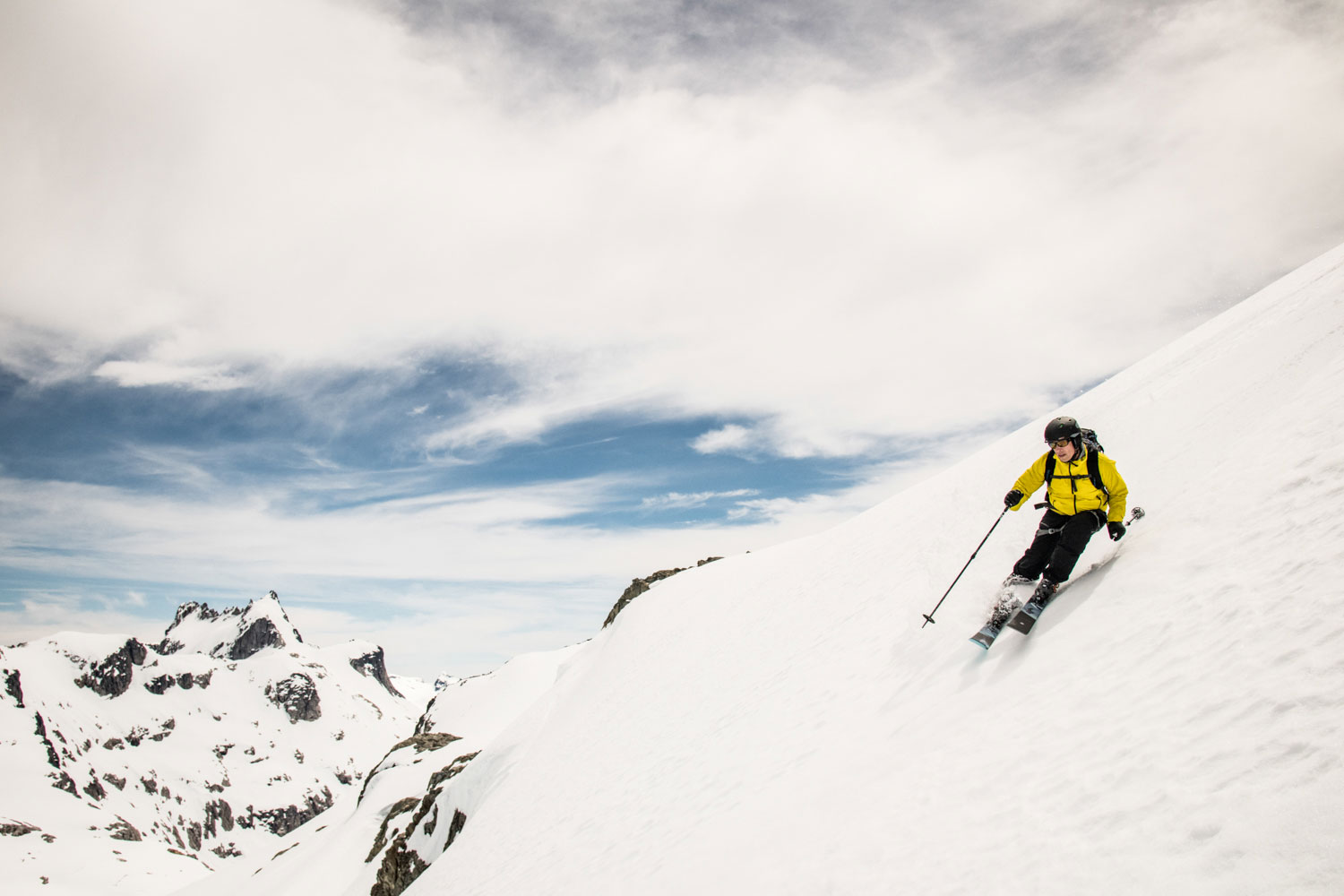 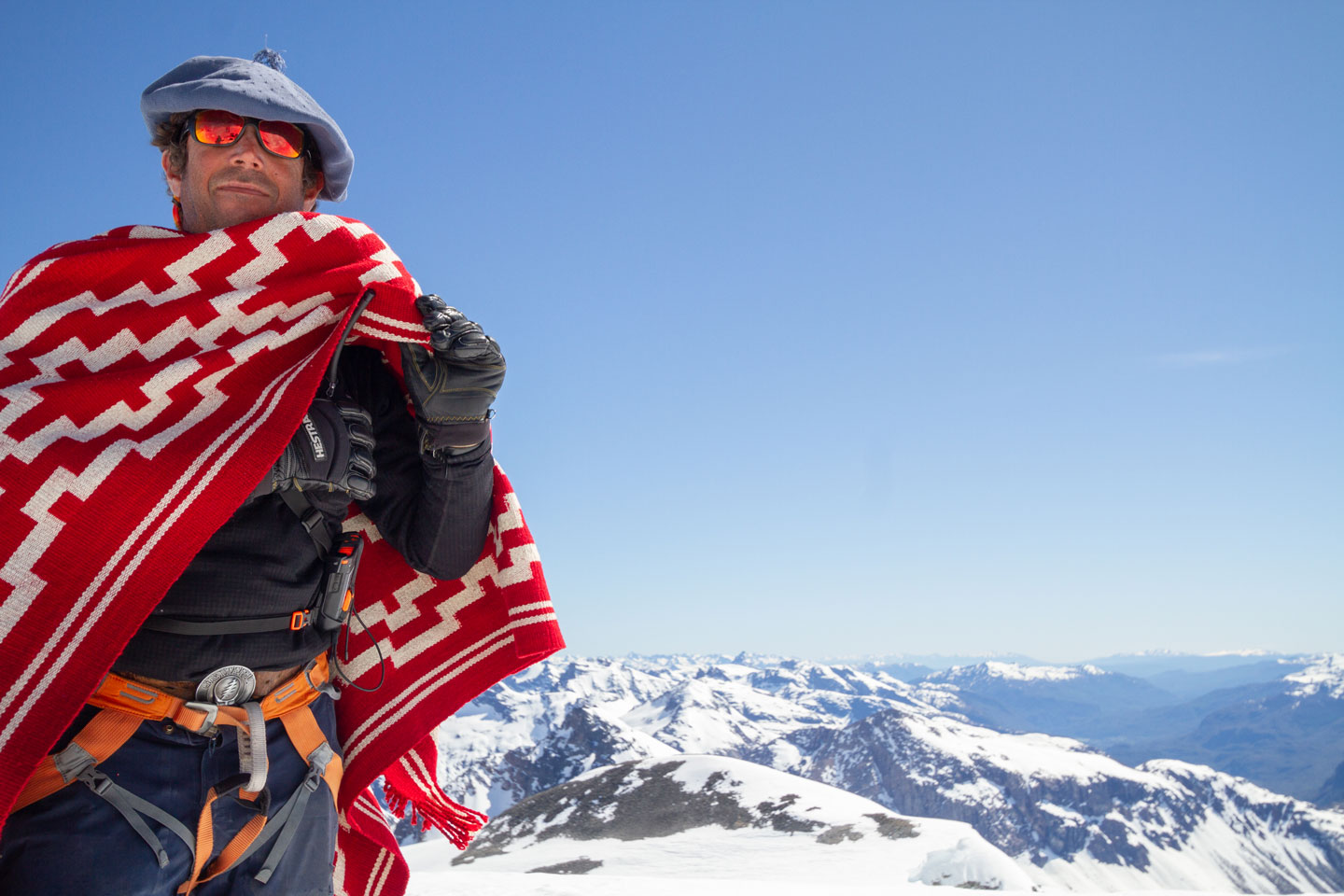 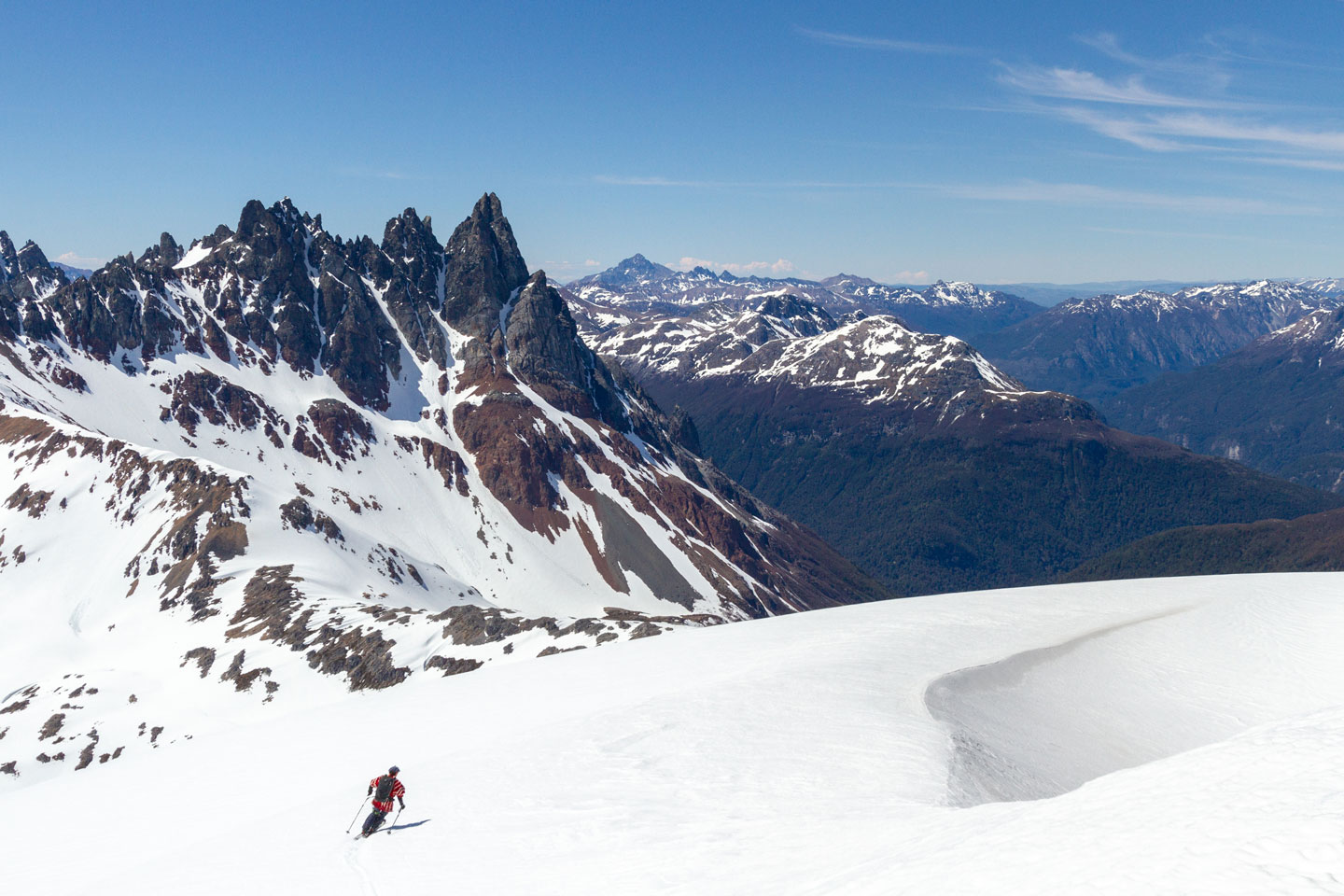 above top to bottom
Andrew Marshall enjoying some of the finest poor man’s powder that high alpine spring skiing can provide. Although it’s hard not to feel an abundance of wealth in a setting and a moment like that. Wind, sun, and air temperature all brought their own unique variety of fluctuations, but smiles and high fives were persistent throughout the day. Photo: Crystal Sagan

Minister of Fun Alan Bernholtz, aka the Gringo Gaucho Guide, opening access to some of South America’s most rugged terrain. In addition, Alan has also opened ski terrain at other Eleven Experience lodges in Iceland, France, and Colorado. Photo: Andrew Marshall

Until next time, a huge thanks to the folks at Eleven Experience: Andy Banas, Laura Haselton, Hannah Smith, Alan, Drew, all the other guides and staff. Muchas gracias! Learn more at ElevenExperience.com Photo: Andrew Marshall

This article first appeared in Volume Thirteen, Issue Four of The Ski Journal.