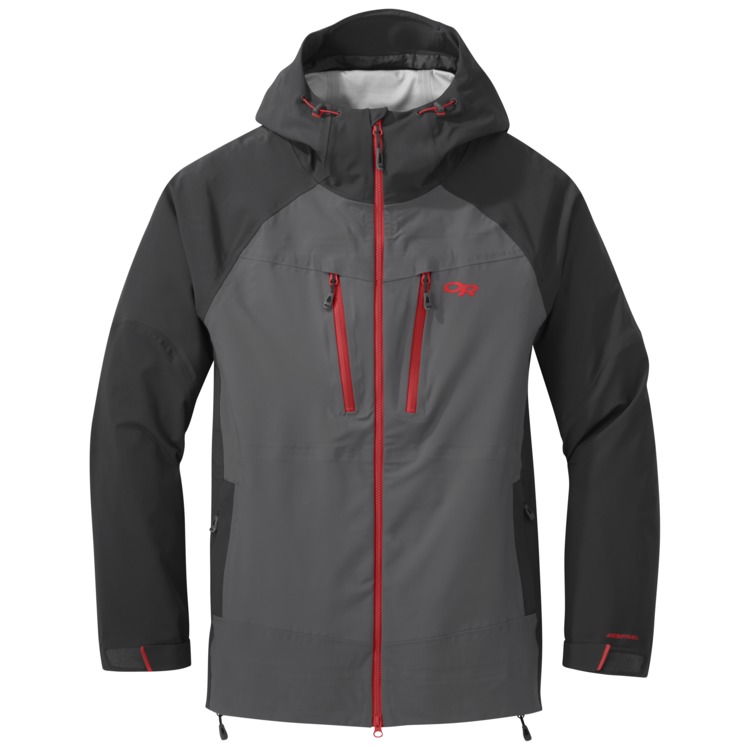 The Schmidt Tree at Island Lake Lodge, BC earned its place in ski lore in 1994 when it appeared on the cover of the Greg Stump classic, P-Tex, Lies and Duct Tape. It’s a tightly-composed photo with Scott Schmidt filling out the frame, backed by the gnarled lower reaches of the tree, impossibly clinging to edge of a cliff. It’s not a particularly big tree—maybe 30 feet tall—and I honestly couldn’t tell you its species. It’s barren, mossy trunk and spindly branches lend an air of impermanence, like it could topple from its precarious perch at any moment. But Schmidt immortalized the snag when he aired right beside it, striking that classic, hands forward, balanced posture before dropping 20 feet and likely laying a hip into the so-so landing below. 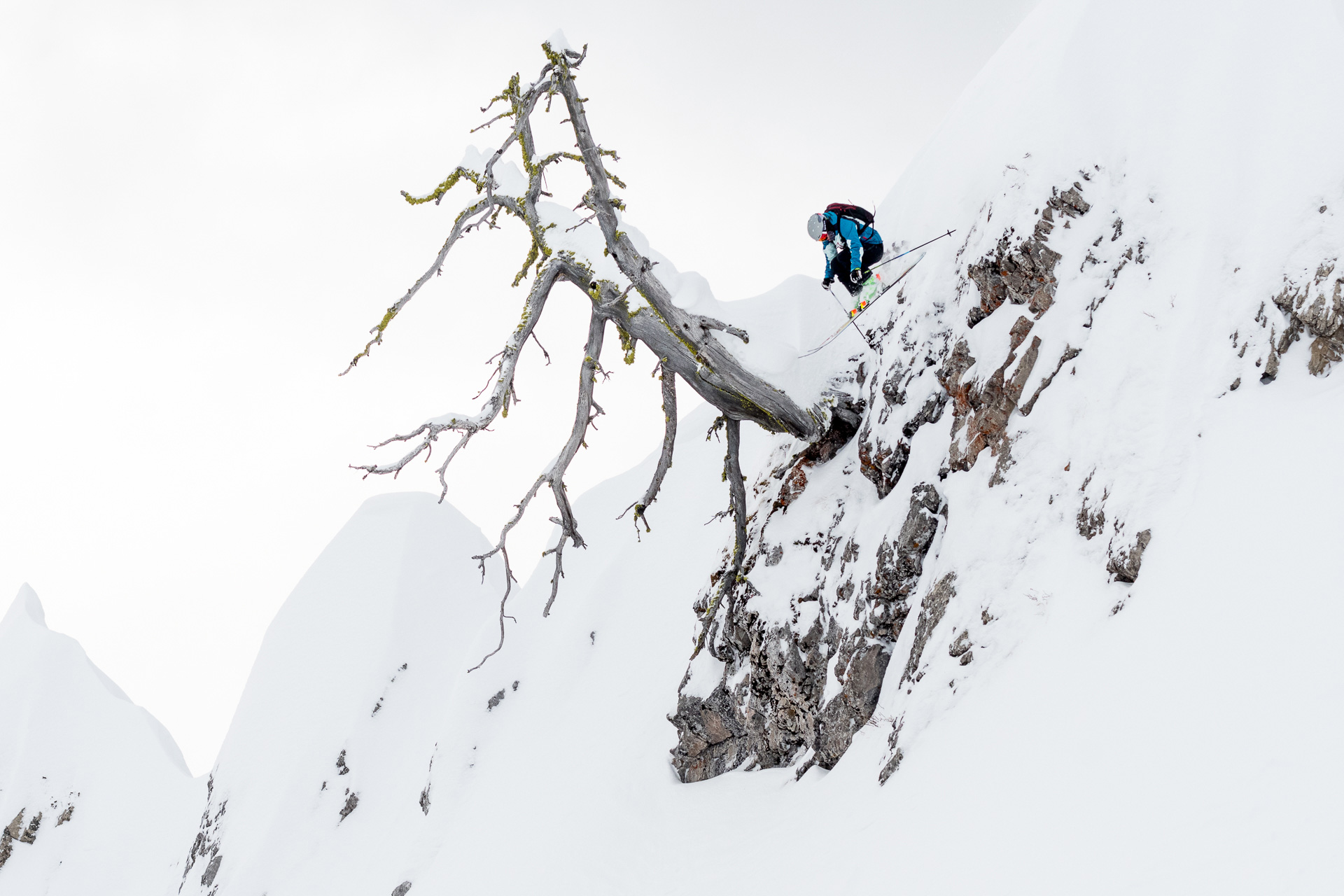 I’ve had the good fortune of visiting Island Lake Lodge a half-dozen times. It’s always been fun—sometimes super deep and blower, sometimes consolidated powder, rarely just about the gourmet food (but the food alone could make the trip). And our visit just after New Year’s 2019 struck a balance of my various visits: cold, knee deep powder; and untracked lines through perfectly-spaced, playful trees. With me were two Outdoor Research athletes: the crowd-pleasing Rachael Burks and, fresh off a two-day mission from Patagonia where he owns and runs a brewery, Argentine ripper Santiago Guzman.

We were there to shoot a short film and enjoy the Lizard Range, which always seems to provide good snow in January. And we were there to celebrate the 30th year of operations at ILL. As one of the oldest catskiing ops in BC, ILL’s humble beginnings of a single, hand-built lodge and a single cat have grown into a full-blown luxury alpine experience. There’s a breakfast buffet with endless fresh fruit smoothies and locally-sourced meats and eggs alongside a daily chef’s creation. Stretch class if you want it. Beautiful barrel saunas with bubble-domed Plexiglas to watch the sun set on the Three Bears while you unwind, après, staples, and, of course, a gourmet three-course dinner to top it off. 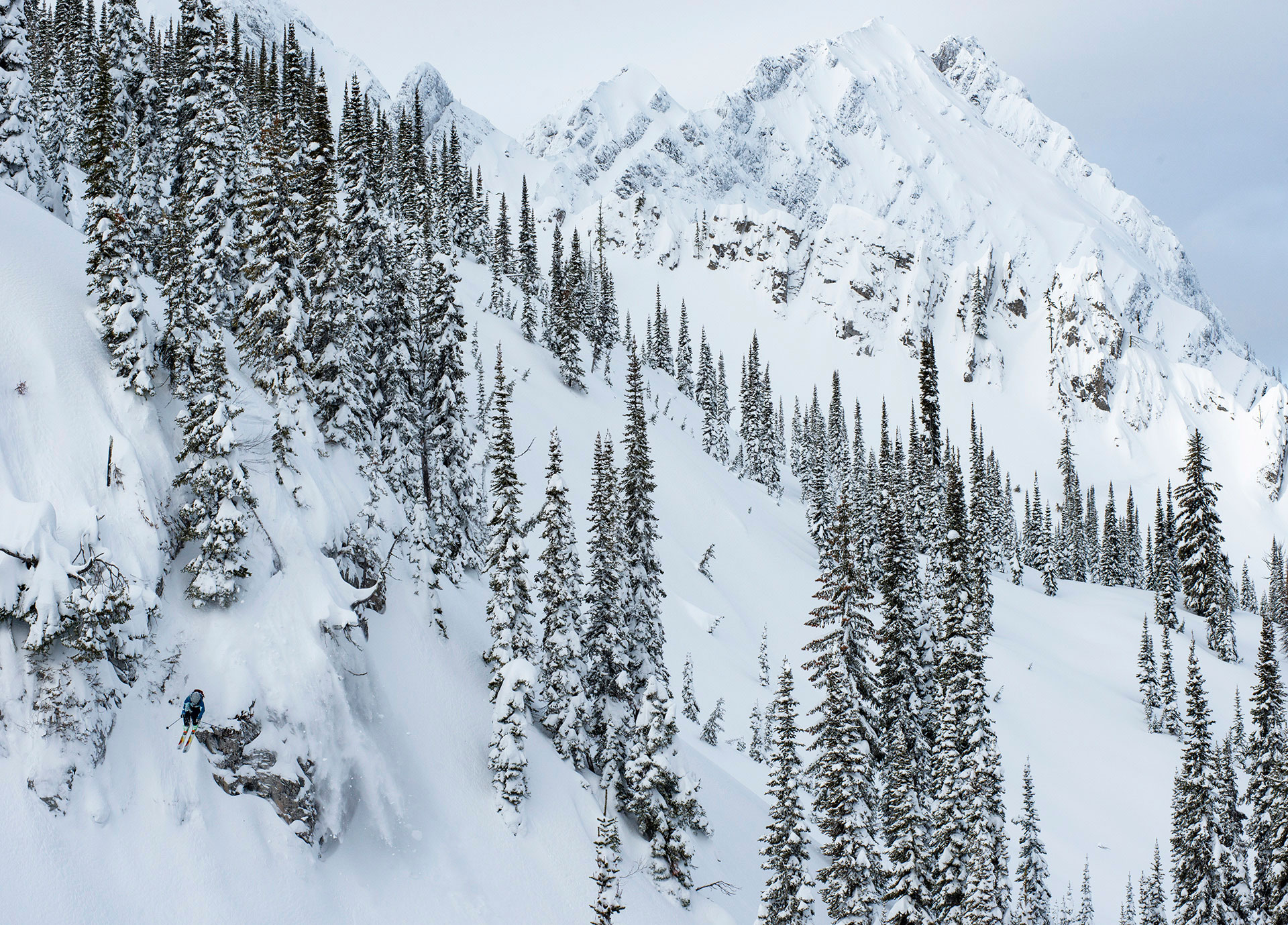 But what brought the likes of Schmidt and Stump and Craig Kelly and so many other legendary snow-sliders to Island Lake in the late 80s and early 90s was the terrain. Rolling alpine bowls guarded by fat spine walls and couloirs; perfectly-spaced evergreens with a few air options peppered throughout. From wide open and cruisy to steep and sporty, you can find it all at Island Lake, along with the well-designed amenities that come with 30 years of crafting the ultimate ski destination. Add in the Fernie Factor—localized snowfalls regularly exceed expectations—and it’s powder town incarnate. 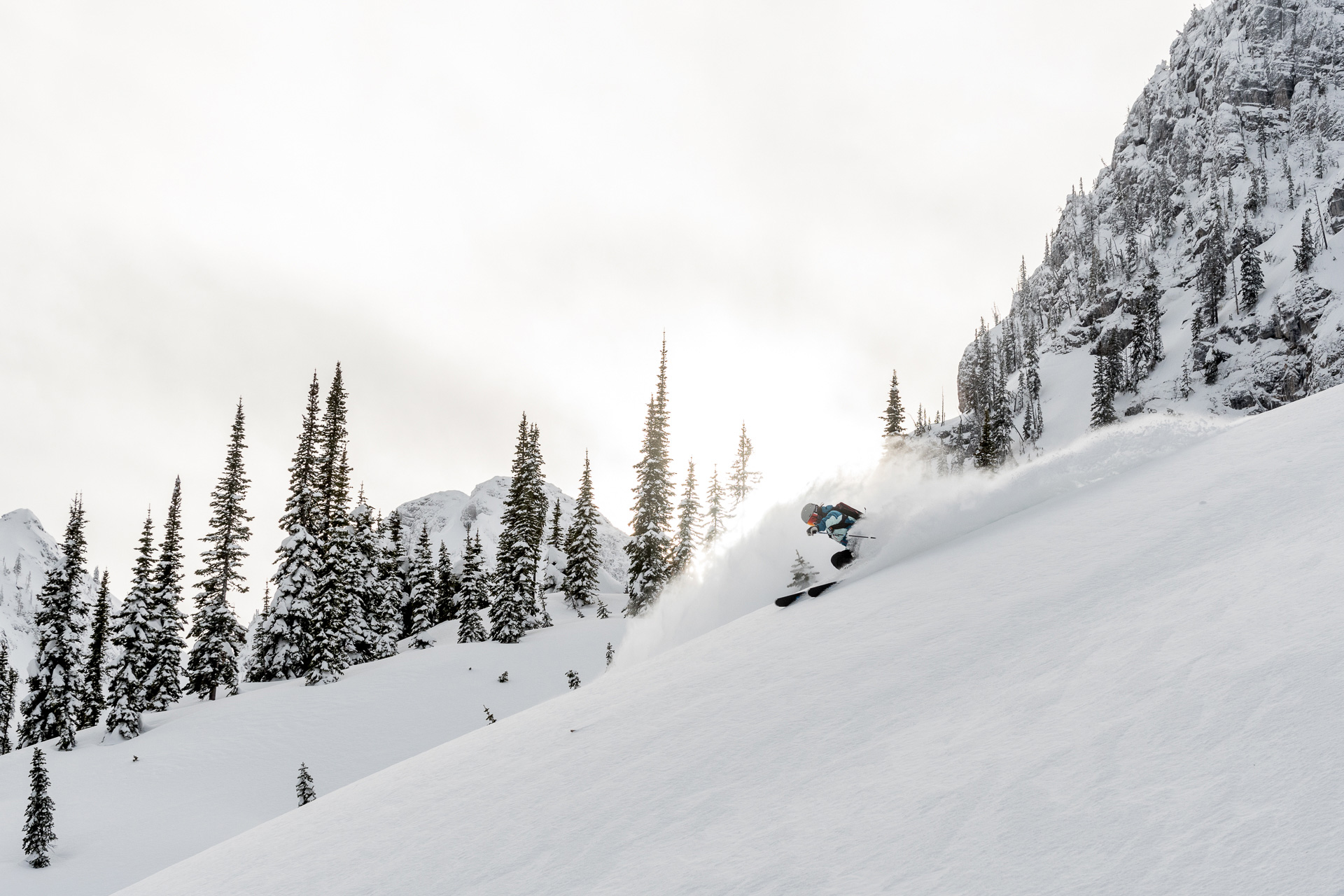 ABOVE (CLICK TO ENLARGE) Rachael and Santiago on left, Santiago center and right. Photos: Colin Wiseman

We indulged in all the place had to offer, spinning lap after lap through mid-elevation glades, stomping out a few booters, skiing untracked powder all day. But it wasn’t until the second-last run of the last day that we rolled up on the Schmidt Tree.

On nearly every trip I’ve taken to ILL, myself or someone in my crew has inquired about hitting the famous air. But the conditions weren’t right, or someone didn’t want to wait around while we hiked, or the landing hadn’t filled in correctly. But January 7 was the day. Immediately upon spying the tree, perched above a particularly fun and playful gully run known as Snowboard Heaven, I dropped the usual line: “Can we hit it?”

Our guide, Greg replied promptly: “Yeah, for sure.” 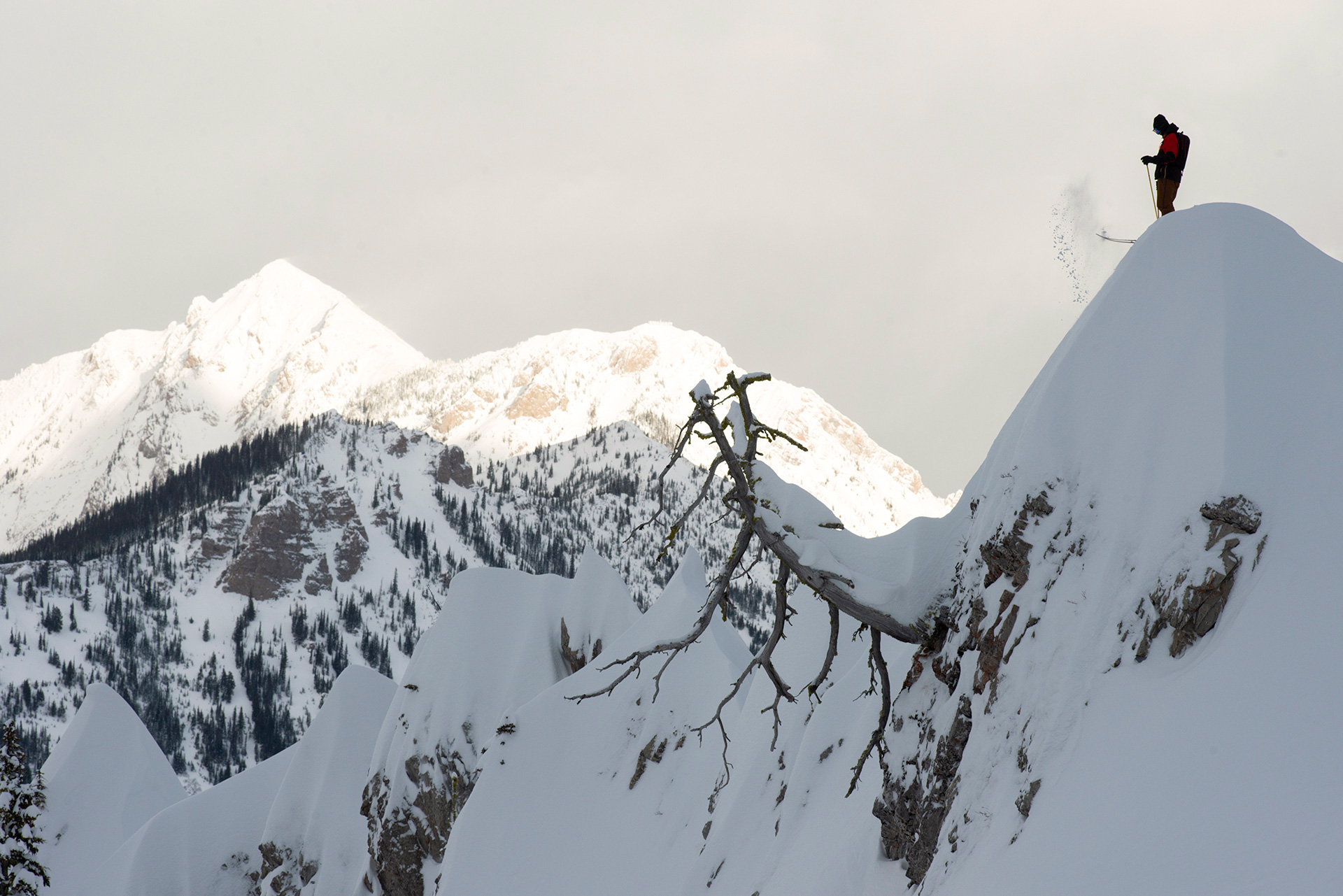 Little did he know I’d been coveting a go at this tree for a half-dozen tours. So up we went. Rachael and Santi prepared to drop. And the rest, as they say, is history—another blip in the 30 years of magic moments at Island Lake Lodge.

Thanks to our guides Greg and Hailey, cat driver Andrew, and the whole Island Lake Lodge staff for an unforgettable three days in the Lizard Range. Also, to Outdoor Research for the support. And special thanks to Mike McPhee for making it all happen