When Micah Black, one of the biggest skiing icons of the late 1990s and early 2000s, gives you golf advice, you listen.

It’s probably good advice, but unfortunately it comes too late. We’re at a bar at Wyoming’s Teton Village, surrounded by a milling crowd of professional athletes, but the 2016 Teton Gravity Golf Tournament had already gone down a few hours before. My performance had been dismal.

Luckily snowboard pioneer Julie Zell had carried our team, but for the rest of us—including icons Kent Kreitler and “Sick” Rick Armstrong—we were content contributing the occasional Hail Mary drive or long put. That, and some serious aquatic golf-ball gathering by Kreitler. It was necessary; otherwise we’d have run out by the fourth hole.

Even with Zell’s help, we were far from being contenders. That came down to a dramatic tie-breaking chip off, pitting skier Dash Longe against photographer Greg von Doersten. GVD shot short and then overly long, giving Dash room for the victory. 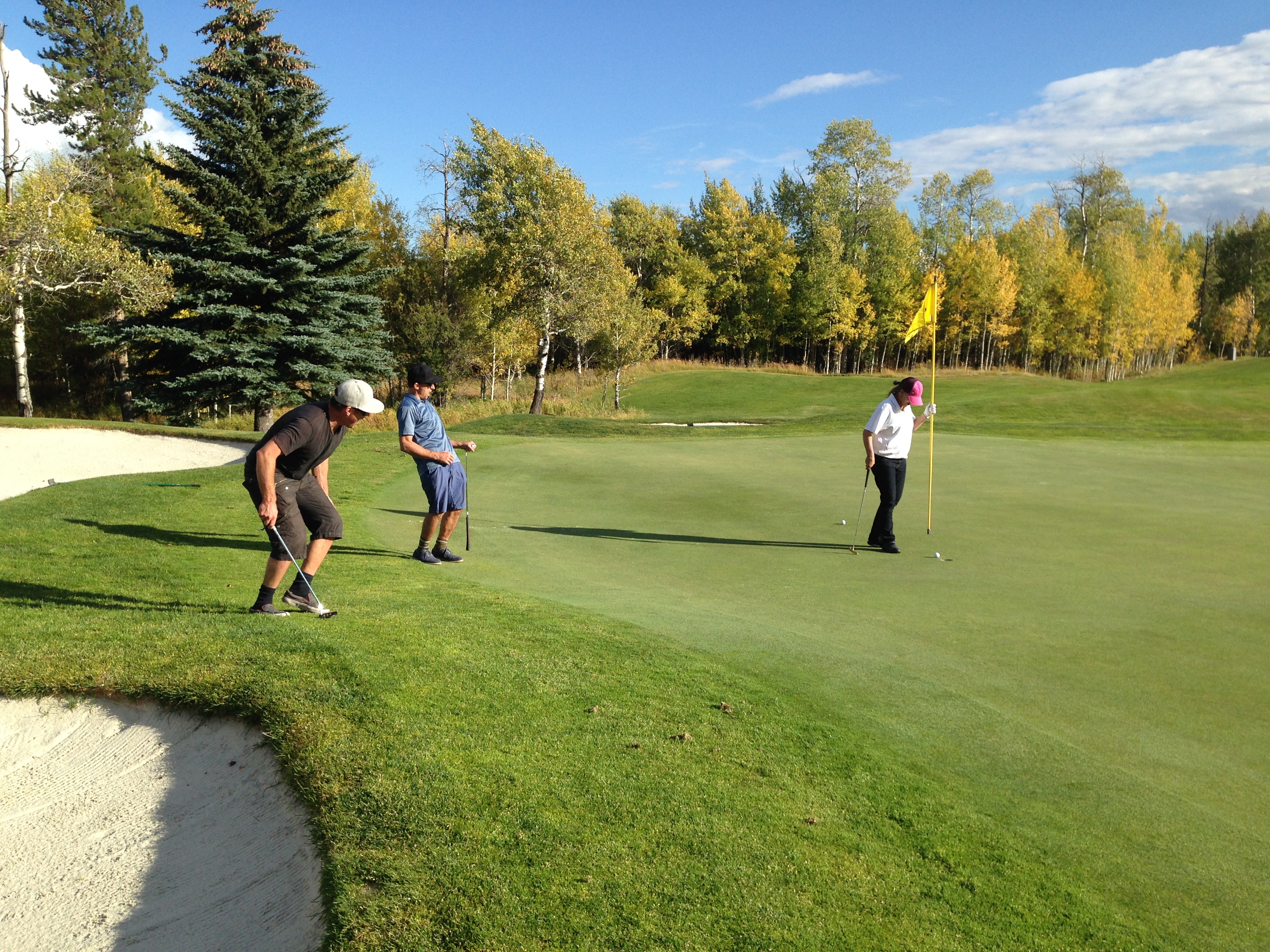 But that was earlier. Now we were enjoying post-competitive libations, warming up for the main event tomorrow night: The premiere of TGR’s 21st anniversary film, “Tight Loose,” to be shown in the parking lot at the base of Jackson Hole Mountain Resort

Over a cocktail I continue taking in Black’s tips, figuring it’ll come in handy at next year’s tournament. I eventually move to the bar to order another drink, and while I wait I muse over the faces that surround me. It’s not just a roster of legends; it’s ski history personified. And it’s also more than that. It’s a family, celebrating two decades of countless adventures, a genealogy of a sport’s revival—and its coming of age. 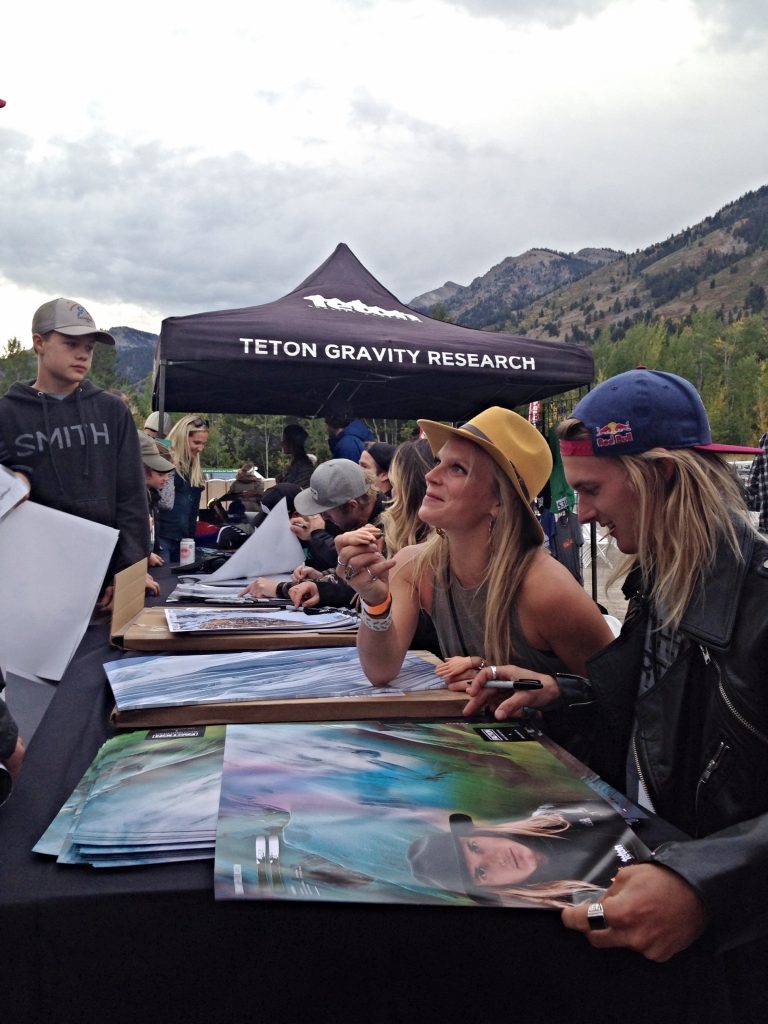 Since the premiere of their first film, “Continuum,” in 1996, the TGR release party has become a fixture of the Jackson Hole ski scene. It’s the unofficial kickoff of the season, the spark that ignites the stoke for both locals and snow sports enthusiasts across the country. And it has been for 21 years.

But for the TGR crew, the kickoff is early. It’s the family dinner the first night of the weekend, when athletes both new and old gather to celebrate history, skiing and friendships built on years of shared experiences.This year was particularly monumental. The company has come a long way since that opening 1996, when co-founders Steve and Todd Jones and Dirk Collins weren’t even sure if anyone would show up. Now TGR has been nominated for an Emmy, been involved with 39 film projects, and moved beyond just skiing. It’s become a media machine, whose influence stretches deep into the action sports world and beyond.

Their core values, however, have remained the same, proven as person after person gives moving speeches describing their memories and thoughts on the company’s long journey. Each is deeply personal. Nic Alegre, looking more rock star than photo ninja, talks about how TGR’s movies inspired him to give up an office job in Manhattan and jump fully into his dreams of ski photography. Rick Armstrong gives a touching description of the early years. And co-founder Steve Jones, the final speaker, wraps things up with a tear-jerker of a tribute, thanking them all for what they’ve meant to he, his brother Todd and TGR.

Afterwards we headed to the Mangy Moose Saloon, where the comradery continues. Sammy Carlson talks with Kreitler. Black mingles with Nick McNutt, and presiding over it all is Todd and Steve, embedded in a booth with Sage Cattabriga-Alosa and Ian McIntosh.

Tomorrow they’ll all battle for golf supremacy, but tonight has the feel of a family reunion, a group united by a common ancestry and fueled by a shared passion. With TGR, you can’t stop the stoke. 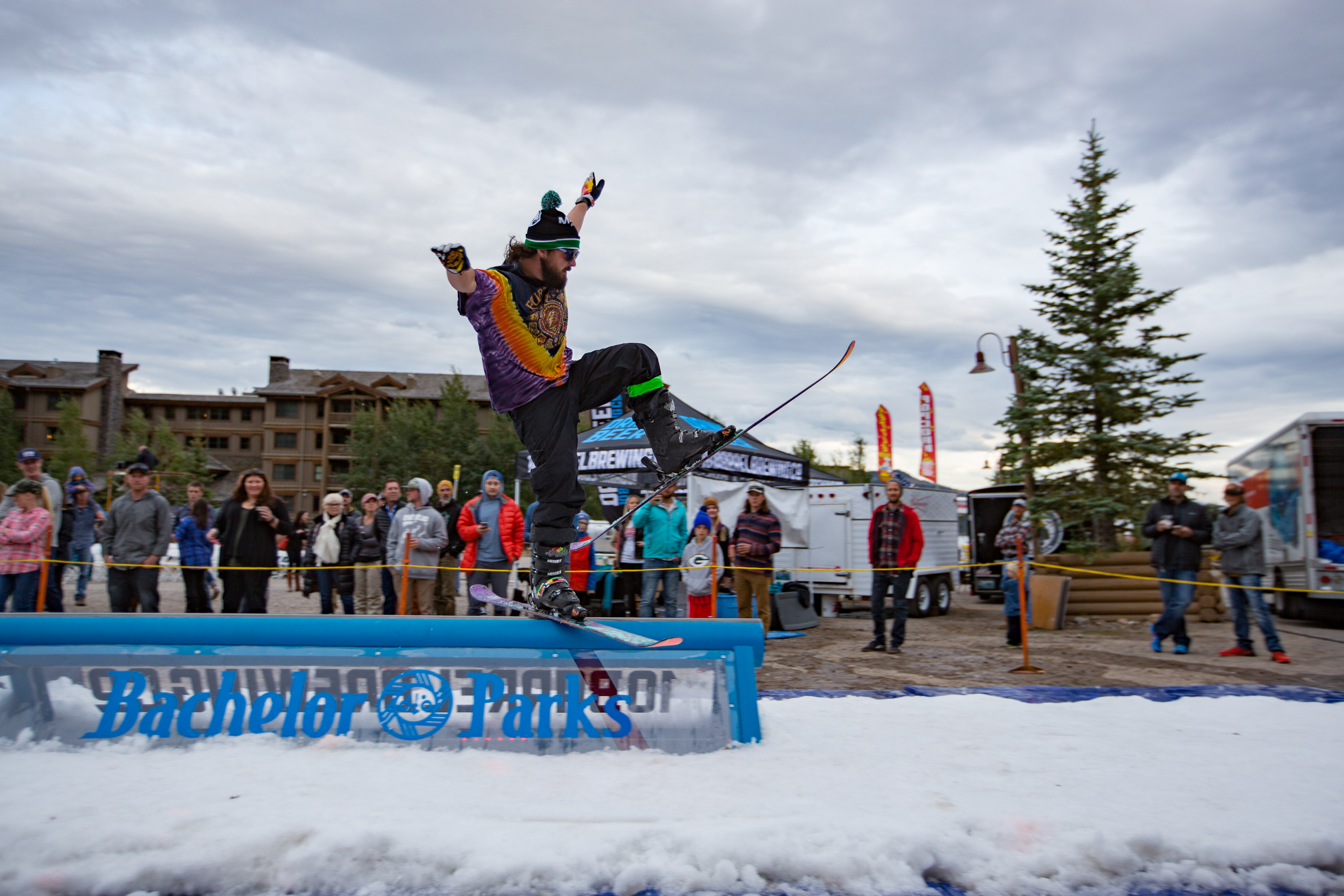 The morning after the golf game is a slow one, as folks recover from the tournament celebrations (or commiseration, depending on their scores). And yet, at the resort, the build-up for the premiere is palpable. There is much to be done before the few thousand attendees arrive: The giant screen must be inflated, the huge mass of chairs must be lined out, the booths for athlete poster signing and gear previews must be assembled, the kegs must be tapped, and 10 Barrel Brewing’s massive truck—the drop in for the pre-showing rail jam—must be covered in snow. And the Tangerine Dream, the Jones’s orange, battered pickup, must be carefully arranged below the stage. Not all icons are flesh and blood. 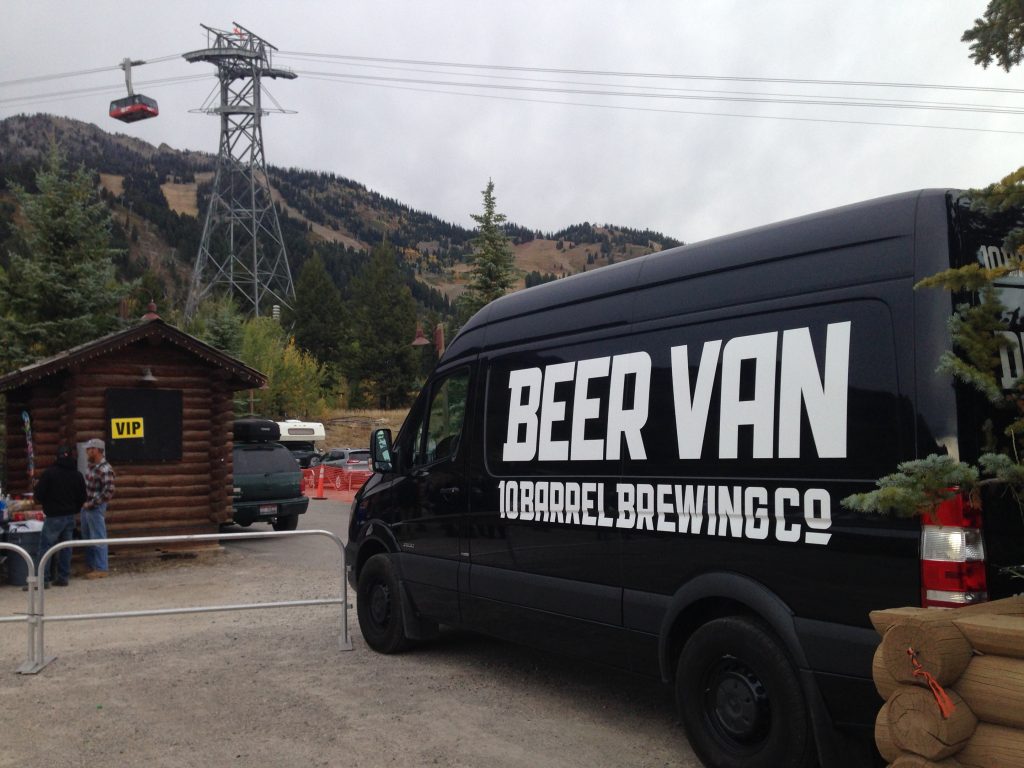 Despite some inclement weather and wind, things come together, and soon music is pumping and beer is flowing. Attendees begin to trickle in, and then the flood opens and the chairs fill quickly. At the signing booth, an all-star lineup of athletes shake hands with skiers both young and old, autographing hundreds of posters and issues of The Ski Journal. For many of them, these are heroes—and not just for the kids.

Darkness falls, lights flip on to illuminate the stage, and in the distance the tram suddenly appears, lit up by its own spotlight. The relationship between the resort and TGR is symbiotic, and the event wouldn’t be complete without those familiar red boxes in attendance. Cheers go up as the first trailer starts, and then quickly silences. The crowd is here for a good time, but they’re serious when it comes to seeing the movie. 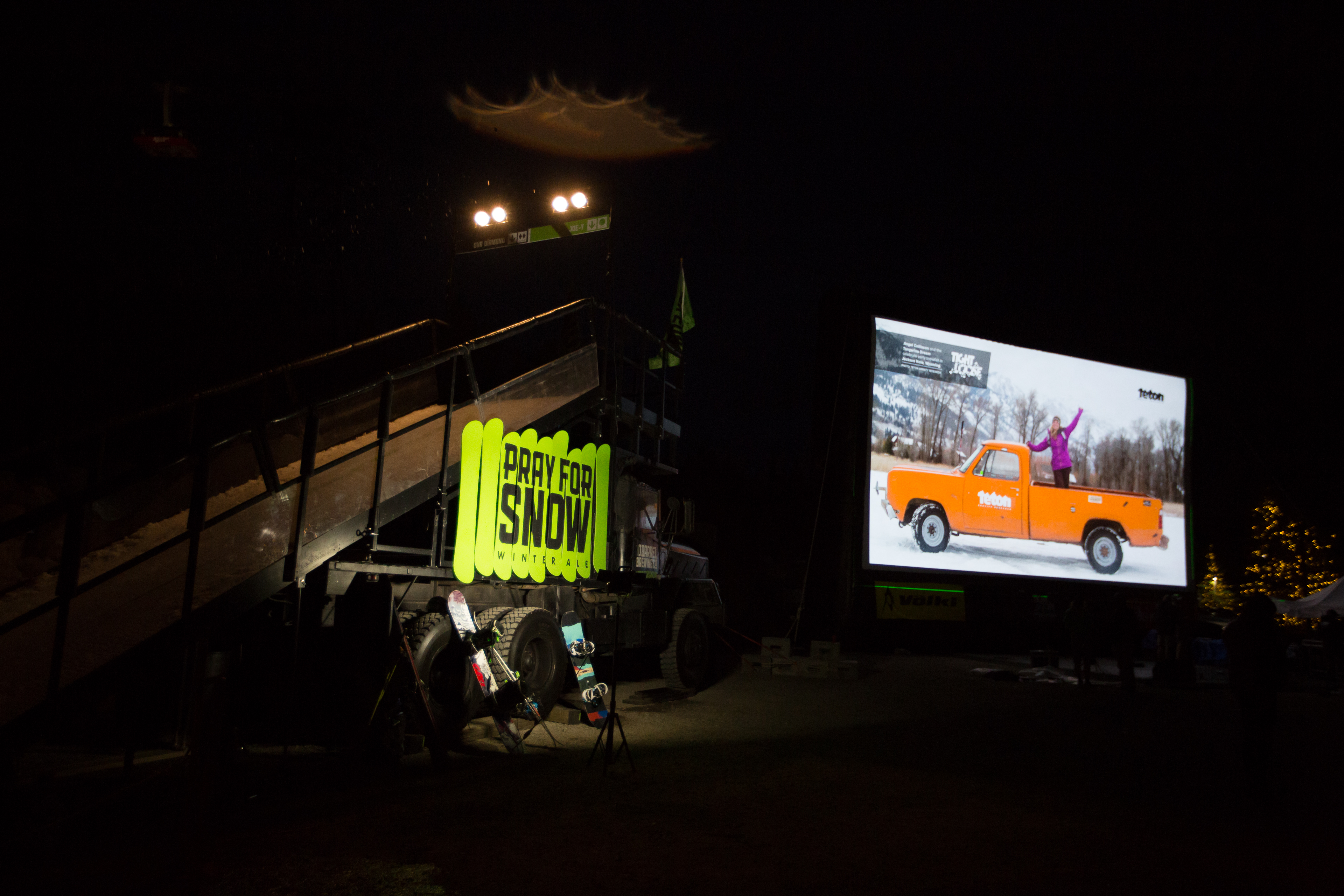 I won’t describe the film—you’ll have to watch it yourself—but the skiing is amazing, with some stand out parts, including Nick McNutt’s first trip to Alaska (spoiler alert—he absolutely crushes). With each banger line or trick everyone roars, and the excitement builds until the closer segment locks everything down. From the reaction, it’s obvious that TGR still knows how to make one hell of a movie.

The after-party fires up at the Moose, then the after-after party moves to the Spur and continues until the bar closes down. Groups of athletes and fans head their separate ways, most to smaller after-after-after parties. I find myself in a hotel room with a cluster of legends and a few new stars, including Reece Edwards and Steve Jones. Conversation burns late (or early?) into the morning. We all listen as Steve emotionally reflects on past memories and muses on thoughts for the future, with the others chiming in and giving their own stories.

As I sit and listen to 21 years of adventures, it strikes me: The whole thing, all the wild moments and often-ridiculous experiences, could only be the result of an equally intense concentration. It’s a necessary equation of rowdy and focused: Tight, loose and living the dream.