ABOVE Elyse Saugstad and Ingrid Backstrom run through the basics of an avalanche rescue search with participants.

Yoga begins at seven. Fifty women move in unison, following the directions of the instructor. Michelle Parker is here, along with a handful of other women I’ve only seen in movies, skiing massive pillow lines, gnarly Alaska spines and sending hefty airs.

They will also be my teachers for the day. I’m not nervous at all.

My bashfulness, however, begins to fade as I work through the movements. It’s a good wake up after the three-hour drive from Bellingham, WA to Stevens Pass Ski Resort, and at the end of the session my body feels relaxed and my mind clear. When we clear the colorful yoga mats and arrange tables and chairs to form a classroom, my curiosity is also piqued.

I am one of 45 women attending the SAFE AS [Skiers Advocating and Fostering Avalanche and Snow Safety] clinic at Steven’s Pass, a one-day, all-women’s avalanche clinic founded by professional skiers Elyse Saugstad, Jackie Paaso, Michelle Parker, Ingrid Backstrom, renowned guide Lel Tone, and the legendary Sherry McConkey. The clinics—held annually at Squaw Valley, CA and one other rotating resort every season—SAFE AS provides a rare space in the ski world: a place where women can learn backcountry knowledge and skills, from a slew of badass women role models. 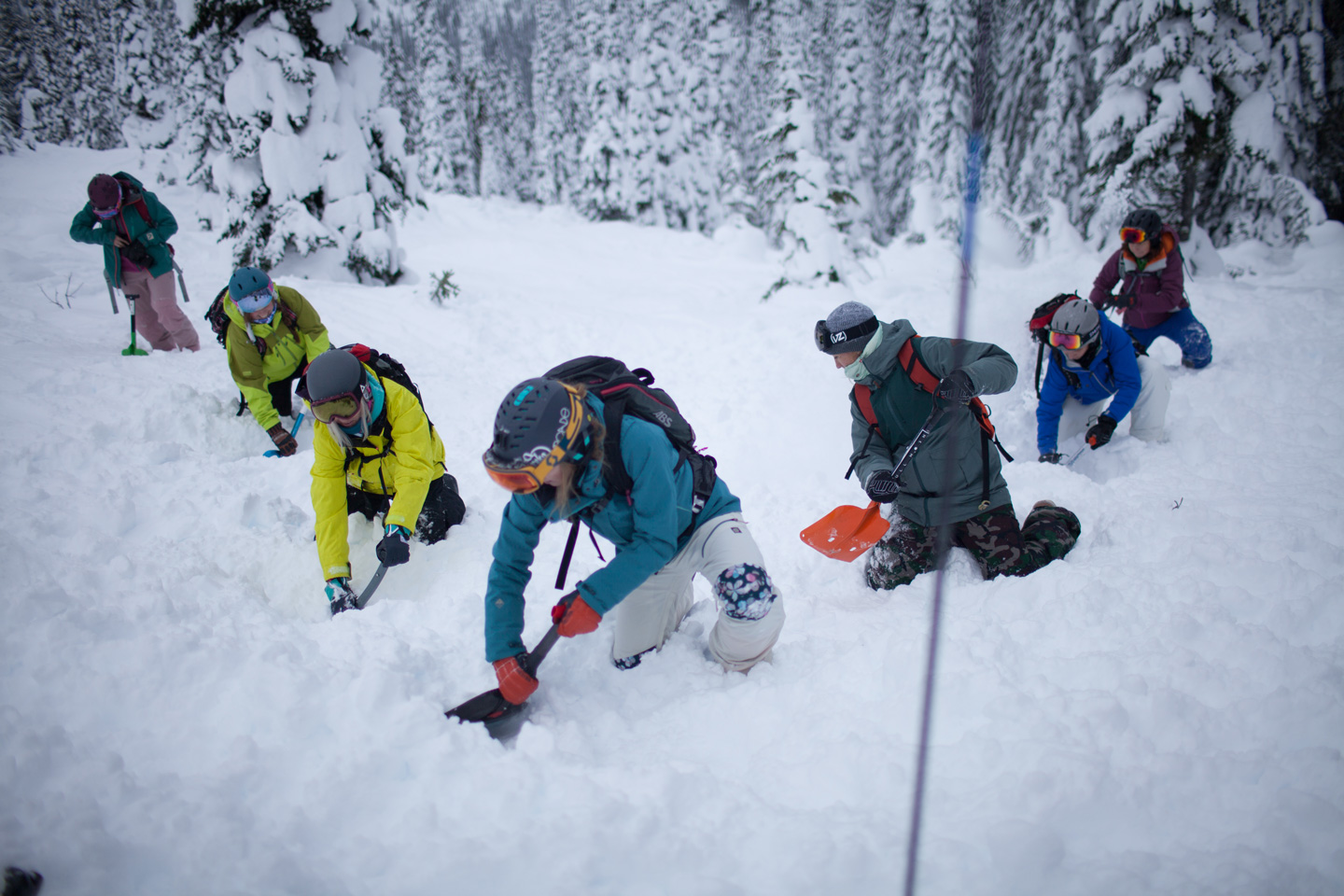 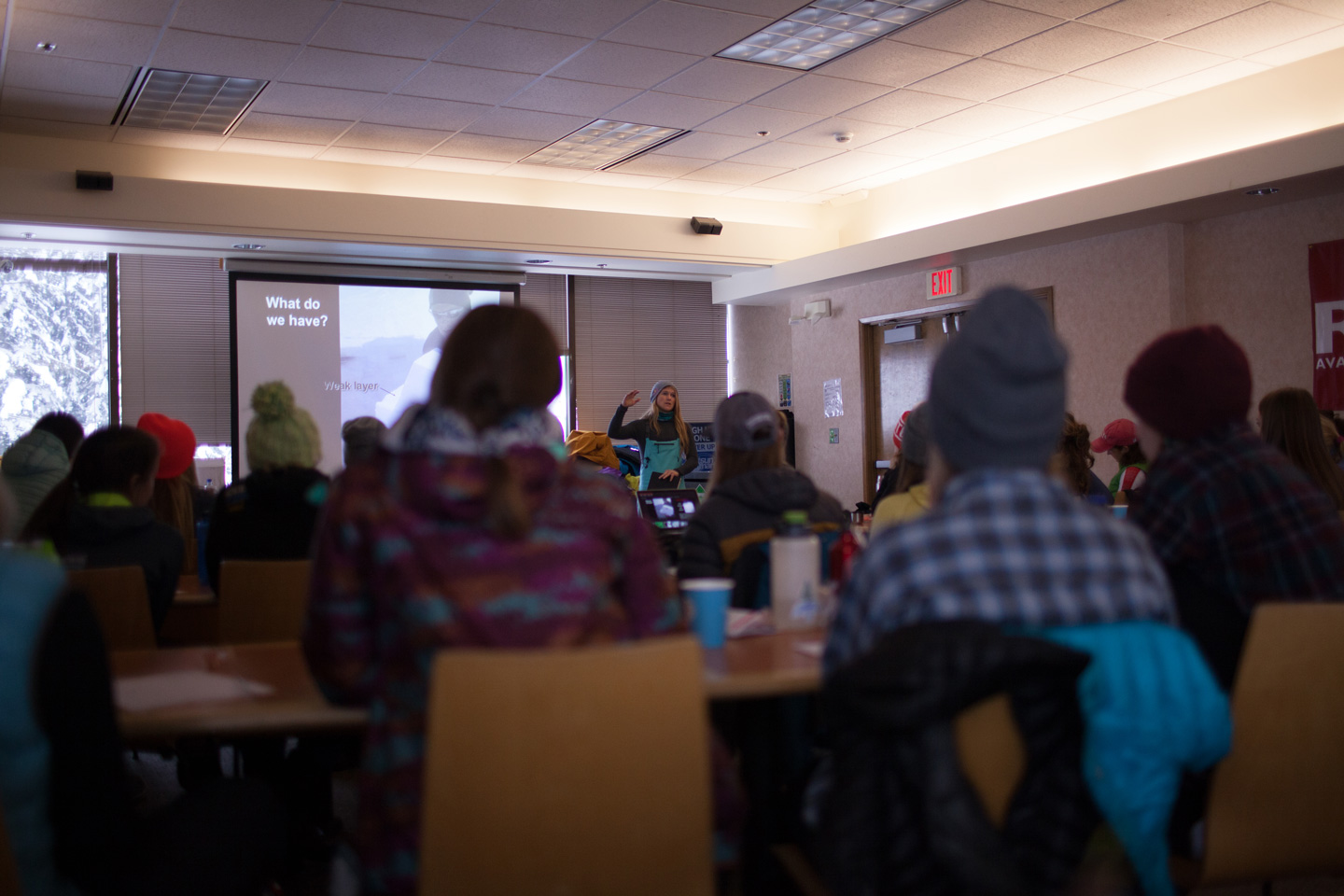 ABOVE top to bottom Together, instructors and participants run through various avalanche rescue scenarios.

Parker explains the various layers of a snowpack.

SAFE AS’s origins were in 2012, when the crew initially gathered over coffee to talk about the positive and negative factors of being a female in the mountains. A few months before, 11 skiers and mountaineers had died in an avalanche on Nepal’s Mount Manaslu, and the women had been thinking of ways to prevent such accidents in the future.

“The conversation grew from there until we decided we should do something,” Parker says. “We felt there was a need [for avalanche awareness] in our own lives.”

Women, they felt, tend to be somewhat left out of the snow safety conversation, especially when their backcountry partners are all men. So, rather than learn from the sidelines, the group wanted to create an avenue for discussion and education tailored to the many ambitious females who spend time in the mountains.

“It was a snowball effect,” says Saugstad. Saugstad has deep personal experience with the subject; she was one of the survivors of the Tunnel Creek avalanche, which had killed three skiers just a few months before she joined the discussion to start SAFE AS. “One thing led to another, and we suddenly had the idea for a fun clinic that wasn’t just scientific and boring.”

With a mission in mind, the group brought on professional guide and avalanche instructor Lel Tone—”SAFE AS’s secret weapon,” as Backstrom puts it. The first event, held in Squaw Valley on December 8 of that year, was completely sold out—as has every clinic in the four years since. 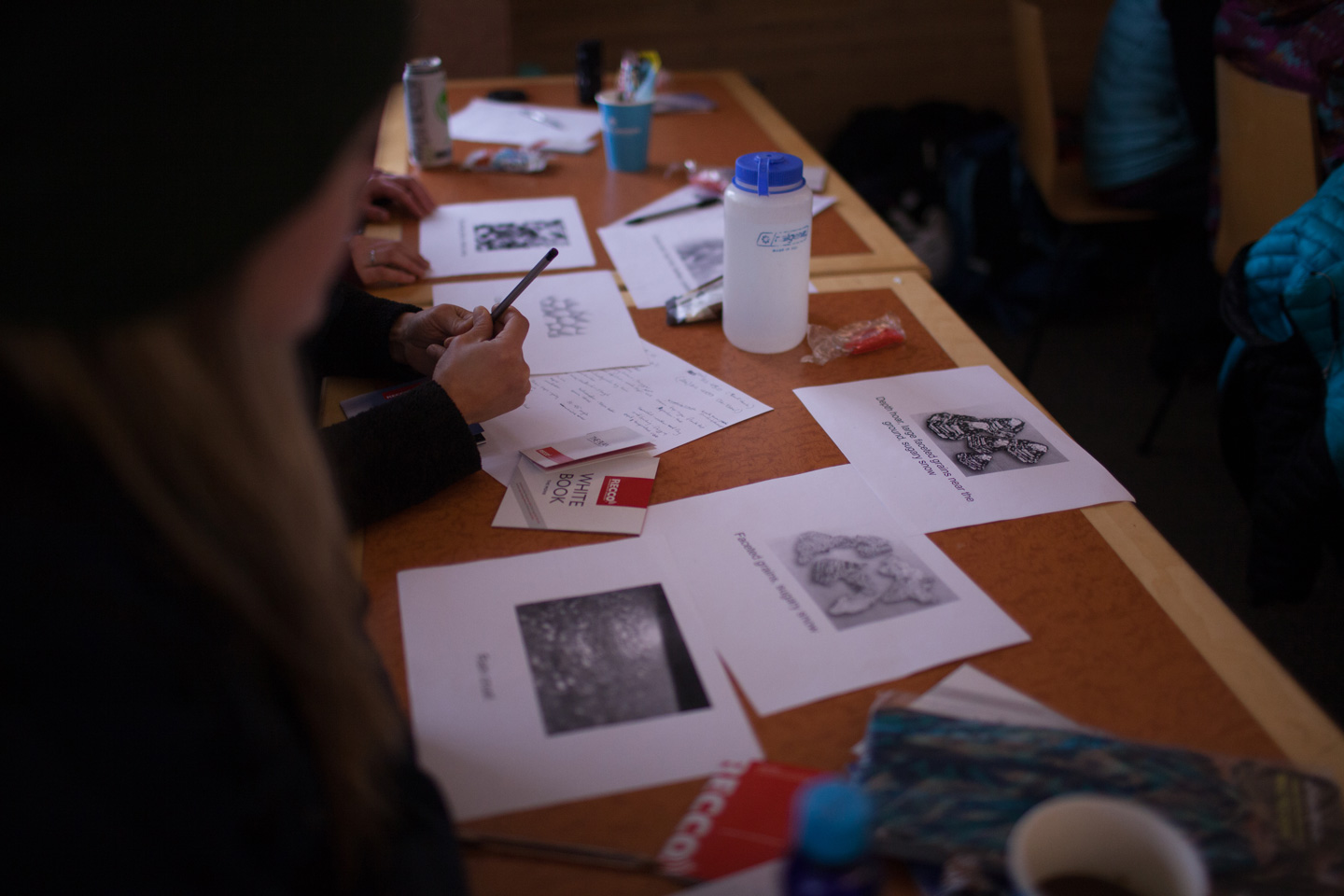 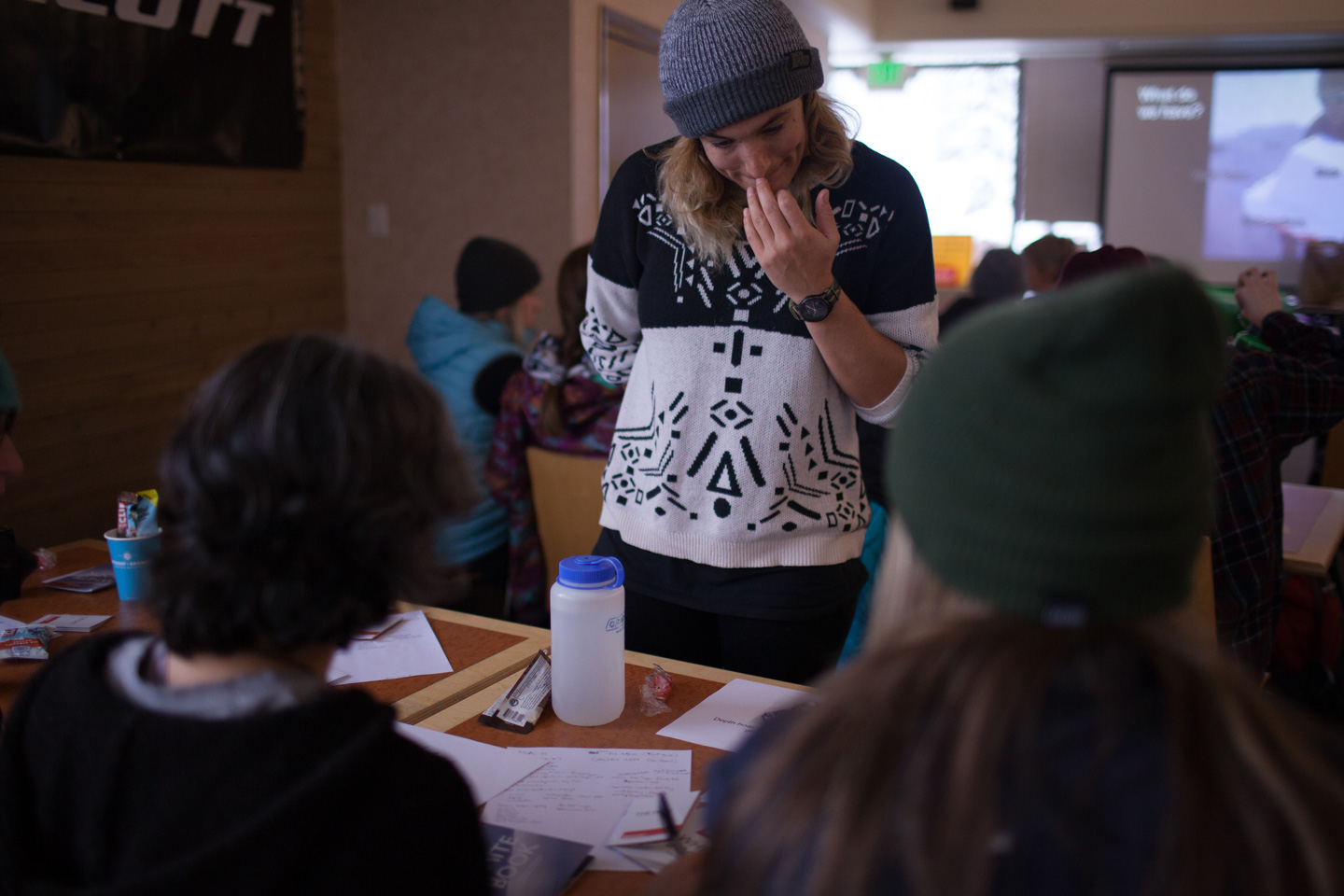 ABOVE TOP TO BOTTOM Participants work together to create their own stable and unstable snowpacks with flashcards showing various snow layer types.

Hana Beaman collaborates with participants to create the most stable snowpack. She explains the advantages of the maritime snowpack at her home mountain, Mt. Baker Ski Area.

The shocking images on the screen in front of us, massive avalanches and their aftermath, aren’t some generic photos from Google. Considering the SAFE AS crew’s backgrounds, they have plenty of personal examples to teach with, and so very little in this course is generic or theoretical. The current photos and video are of Lel Tone, the woman standing in front of us, skiing her way out of a particularly nasty slide. It doesn’t get much more personal than that.

The rest of the clinic follows a similar format. Using examples from their own experiences, each woman presents their thoughts and lessons on trip planning, backcountry travel, snow science, and avalanche safety. Although informal at times, with jokes and funny stories, it’s nearly the same amount of information you’d get in a multi-day avalanche course.

During the inside portion of the course, a woman in the class apologizes for having a question, and the instructors smile at each other and introduce the Sorry Game: if someone in the room says sorry—unless warranted by a nudge, kick, or other reasonable cause—they have to do 10 push-ups. The game was created five years ago when the ladies first began these clinics.

“You don’t get anything done [if you’re always saying sorry],” Ingrid explained.

The instructors are right; constant apology is a common occurrence among women, but recognizing how often it’s said and how often it’s actually meant is an important lesson to learn, especially when it comes to high-risk decision making. We shouldn’t be sorry for asking questions, and especially not for speaking our mind. 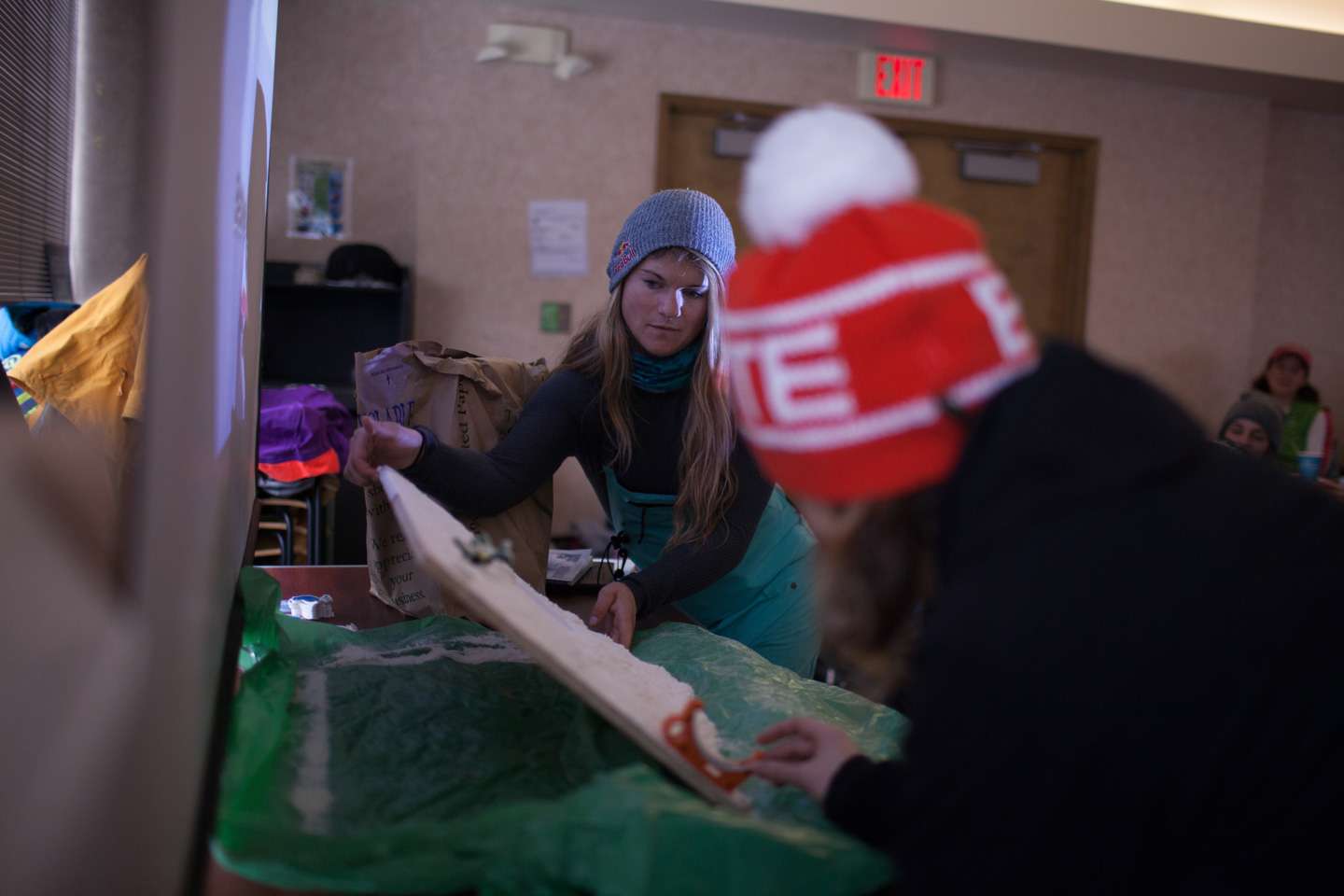 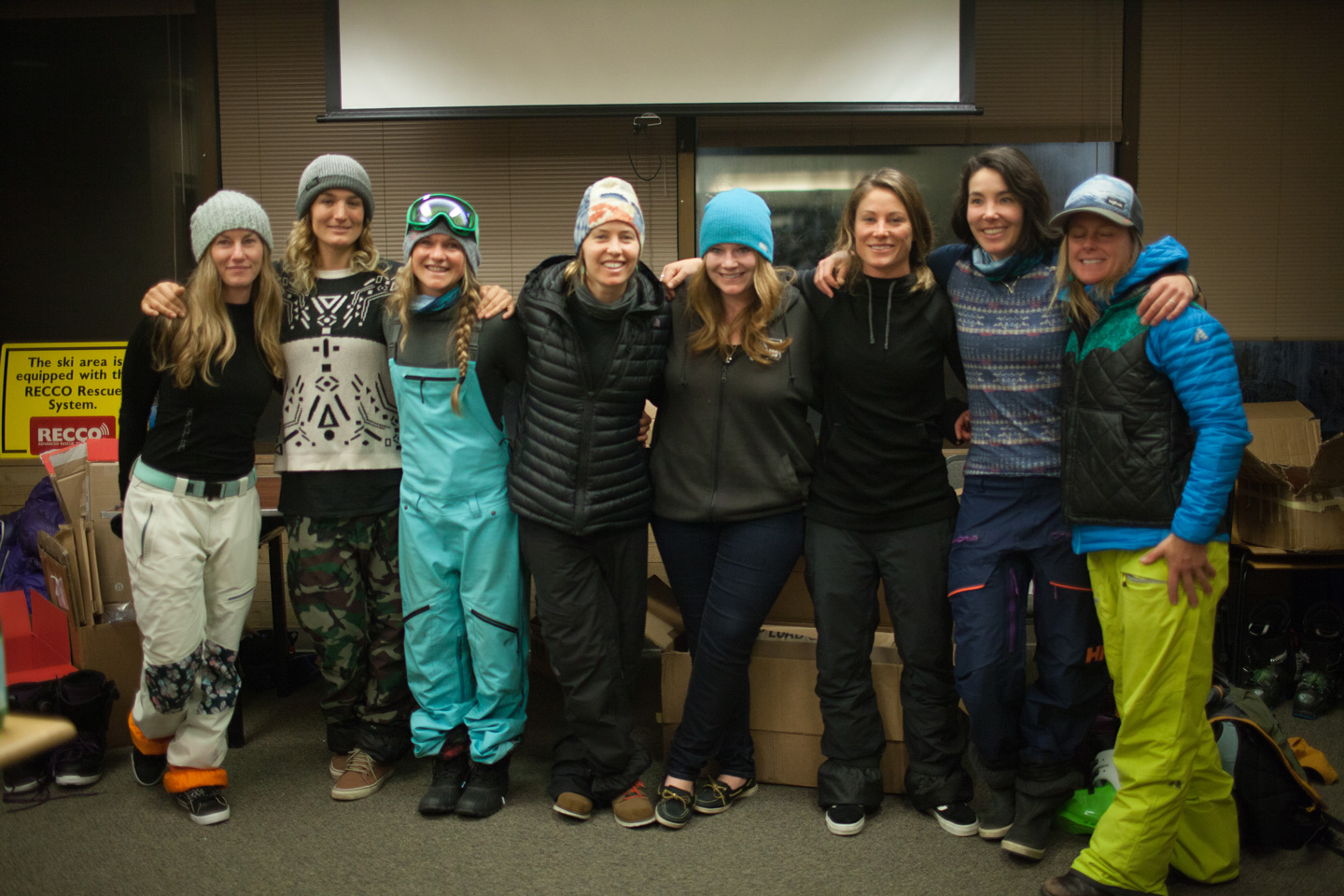 above top to bottom Michelle Parker demonstrates the relationship between snow type and slope angle.

After the classroom session, we head out onto the mountain for the hands-on portion of the course. From an instruction standpoint, it’s not an easy crowd to teach, as abilities and experience levels span the gamut. For some of the students, it’s their first time holding a beacon; for others, the focus is streamlining their probing techniques. And for me? Under the tutelage of Saugstad, I set a new personal record on my two-beacon fine-point search.

That’s the magic of SAFE AS: these are our idols, our role models, the women we strive to be. But here, we realize they’re just humans like us (albeit insanely talented), with the same concerns and uncertainties, who care enough to personally instruct a whole classroom. They know how amazing the backcountry can be, and they want us to enjoy it as much as they do.

We continue to practice various scenarios, improving our skills through repetition and quasi-firsthand experience, with the instructors taking turns pretending to be avalanche victims. It’s fun, but they also make sure we know the importance of efficiency and communication. After practicing in small groups, we return to the classroom where they answer any final questions, many of which the instructors have heard before.

“We often get asked how to speak up when it’s a group of all guys,” Jackie Paaso says. “All of us have been there. Sometimes people don’t listen, but you can break through that barrier. It is important to speak up, take care of yourself, help others, and not just rely on your backcountry partners. Everyone having a say is more valuable than the most experienced guy on the mountain telling them what to do.”

The day ends with a gear raffle and a wine and cheese platter, the excitement continuing as people win radios, outerwear, lift tickets, and skis. We’re not done yet, however—after saying goodbye to our fellow classmates, we head to the Brooks Chair for some night skiing. Just before unloading at the top, I look up at the neighboring peaks, dimly lit by the moon and lights on the runs. Suddenly, all that terrain felt a little more accessible.

2017 SAFE AS clinics will be held in Copper Mountain, CO on December 3-4, while another will be held at Squaw Valley, CA on December 9-10. Both locations will have one all-female clinic and one co-ed clinic. Visit Safeasclinics.com for more information. 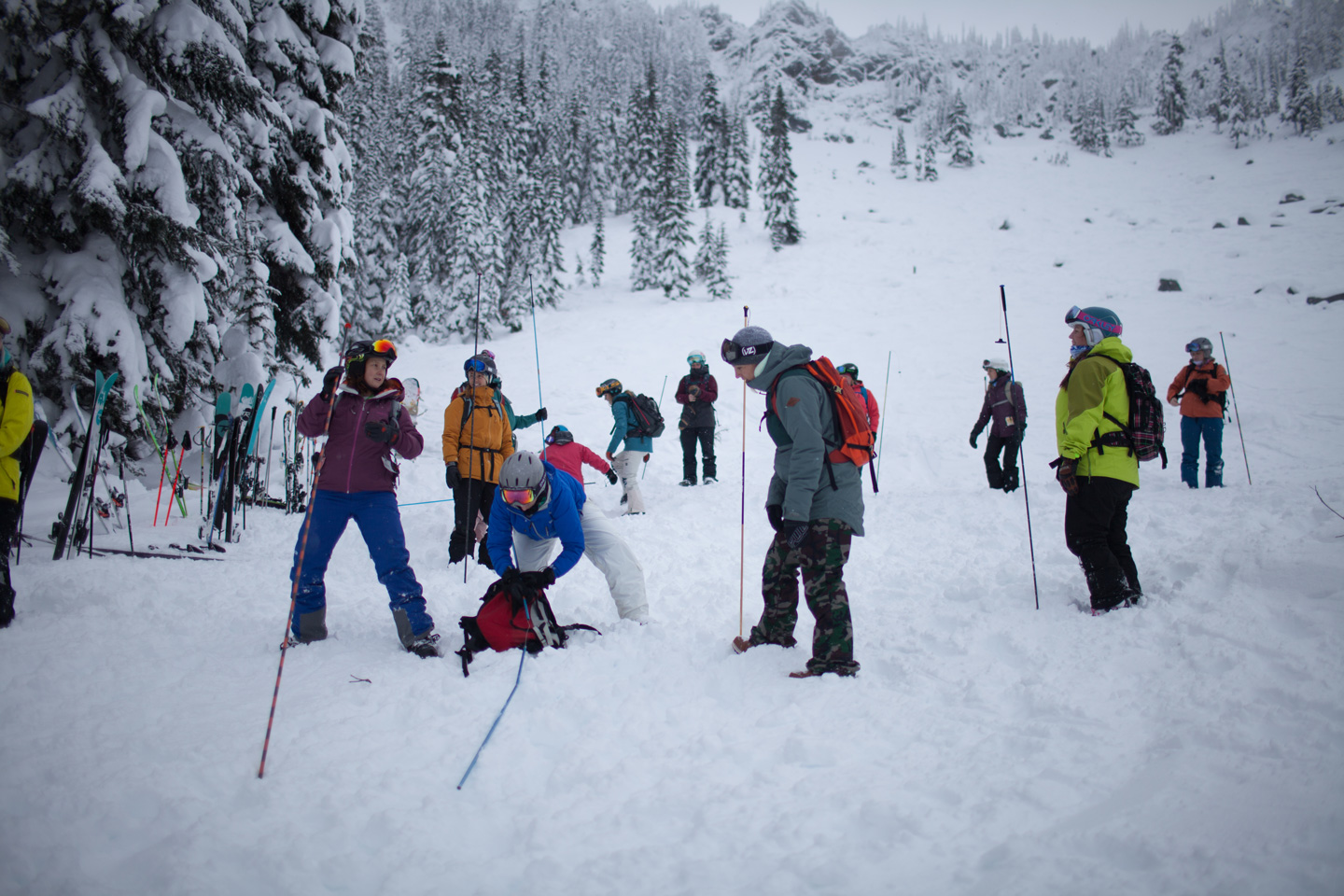 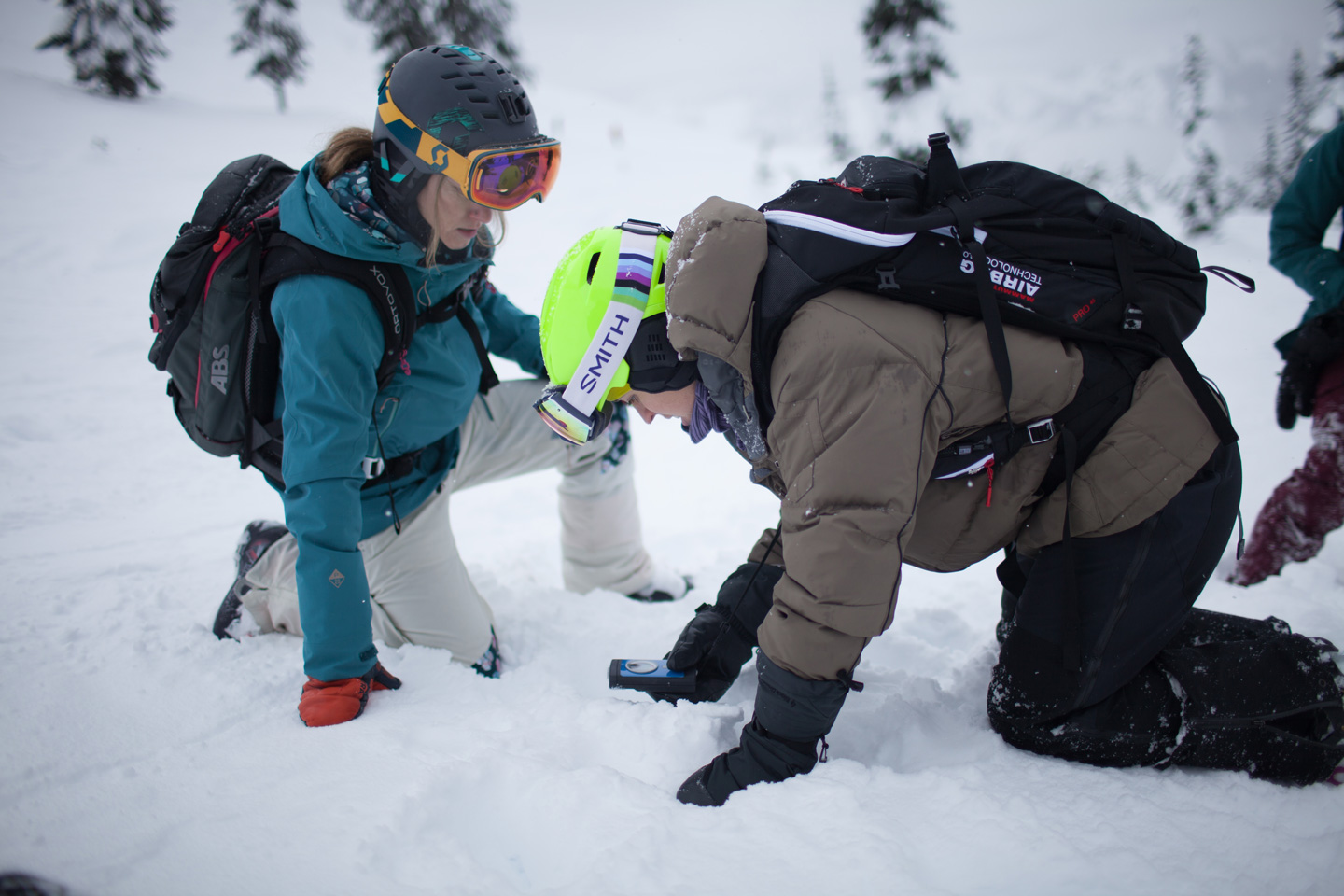 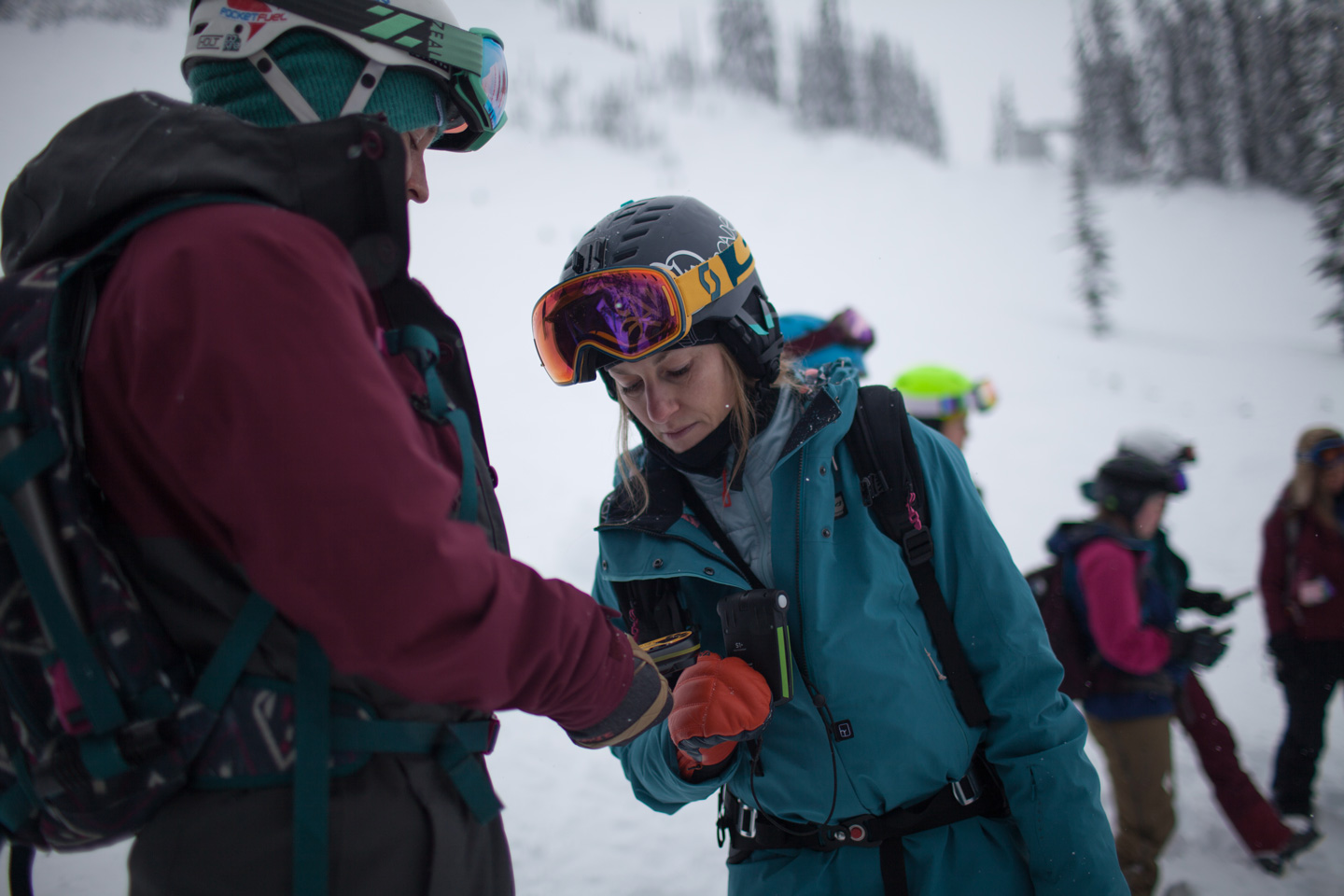 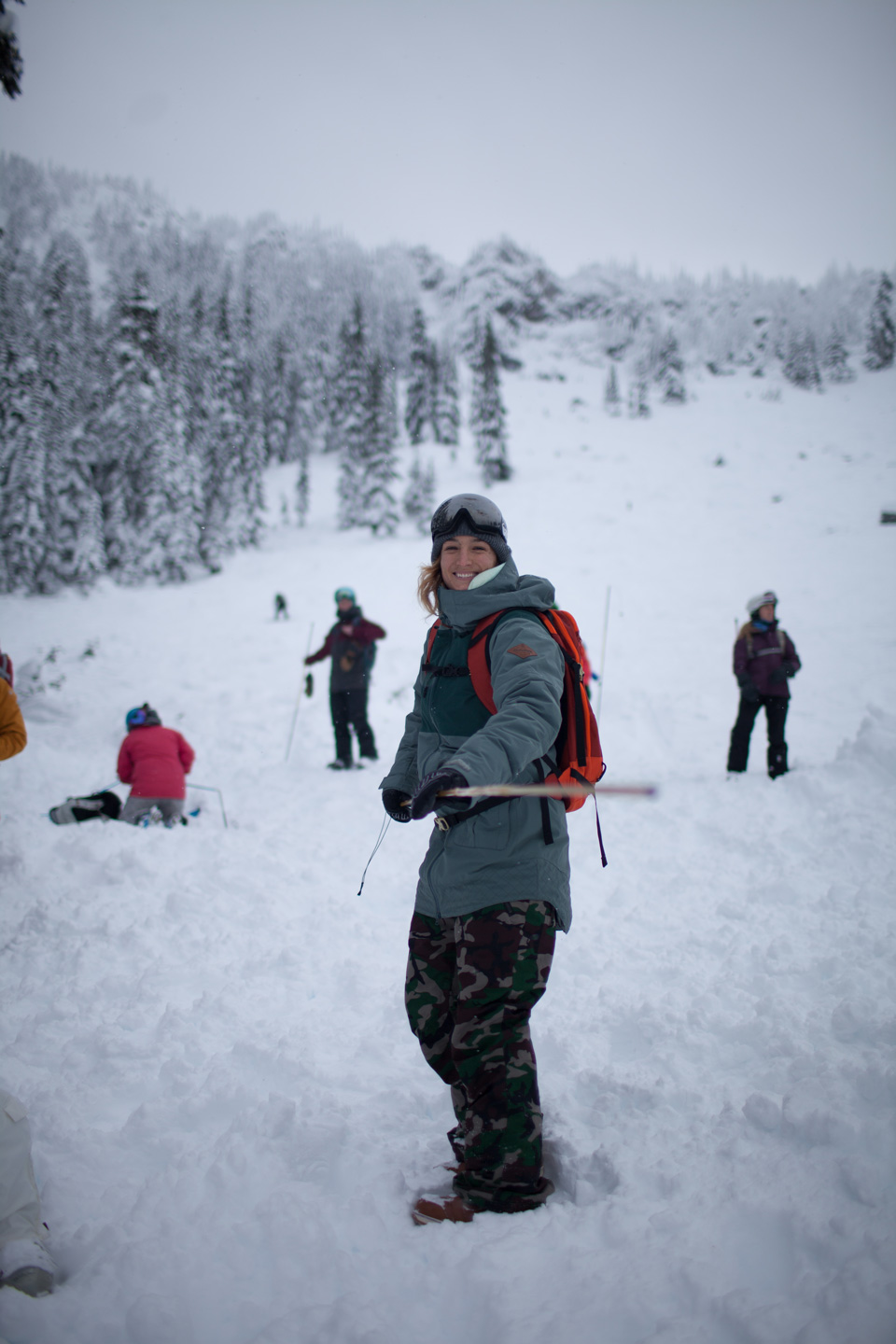 above top to bottom Participants work on their probing techniques as instructors give them one-on-one feedback.

Saugstad times and critiques each participant individually on their fine point search.

The clinic moves into the snow. Elyse Saugstad checks a participant’s beacon and explains the importance of an accurate reading.