It’s hard to take anyone seriously when they’re wearing purple skinny jeans and ski boots. It’s even harder when they’re also making super G turns up a golf course, or juggling tennis balls while sliding a handrail in the Finnish suburbs.

But, after watching the high-consequence hijinks in Real Skifi’s 16-part webisode series, it’s almost impossible not to. 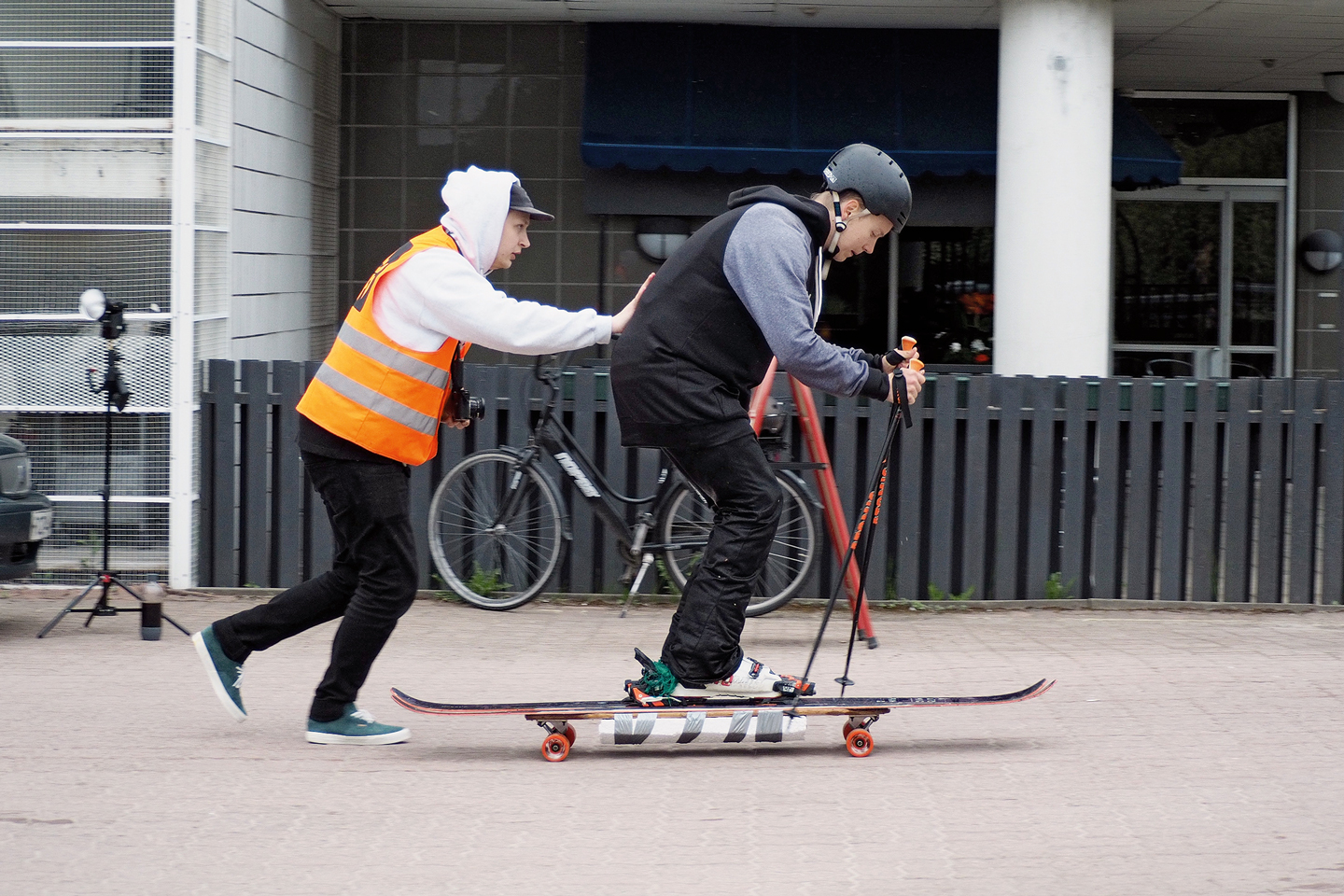 ABOVE While filming the closing scene in Episode 16—which featured Juho Kilkki, standing on his skis on a longboard, spinning off a jump on a bridge and into water—Max Steffansson pushed him back up the hill every time he hit the jump. You can see the floatie underneath the board, courtesy of Ilkka Hannula’s ingenuity.
Photo: KIMMO KORPELA

It’s also impossible to not smile or want to go skiing. The crew, made up of Finnish skiers Juho Kilkki, Ilkka and Verneri Hannula, and filmer/director Janne Korpela, have spent the past five years putting together some of the most quirky, fun and creative segments out there. They are so bizarre and impressive they require their own genre: “Skifi,” or “ski fiction,” a play on “science fiction.”

Real Skifi’s urban antics include standard rail slides, roof gaps and airs, but other clips are harder to describe. Back-flipping onto and off a trampoline with skis on. Clicking out of skis intentionally, midair. Dropping cliffs onto sand or foliage landings. “Ski fiction” stretches the definition of skiing to include anything performed with skis on—or off, depending on the trick. 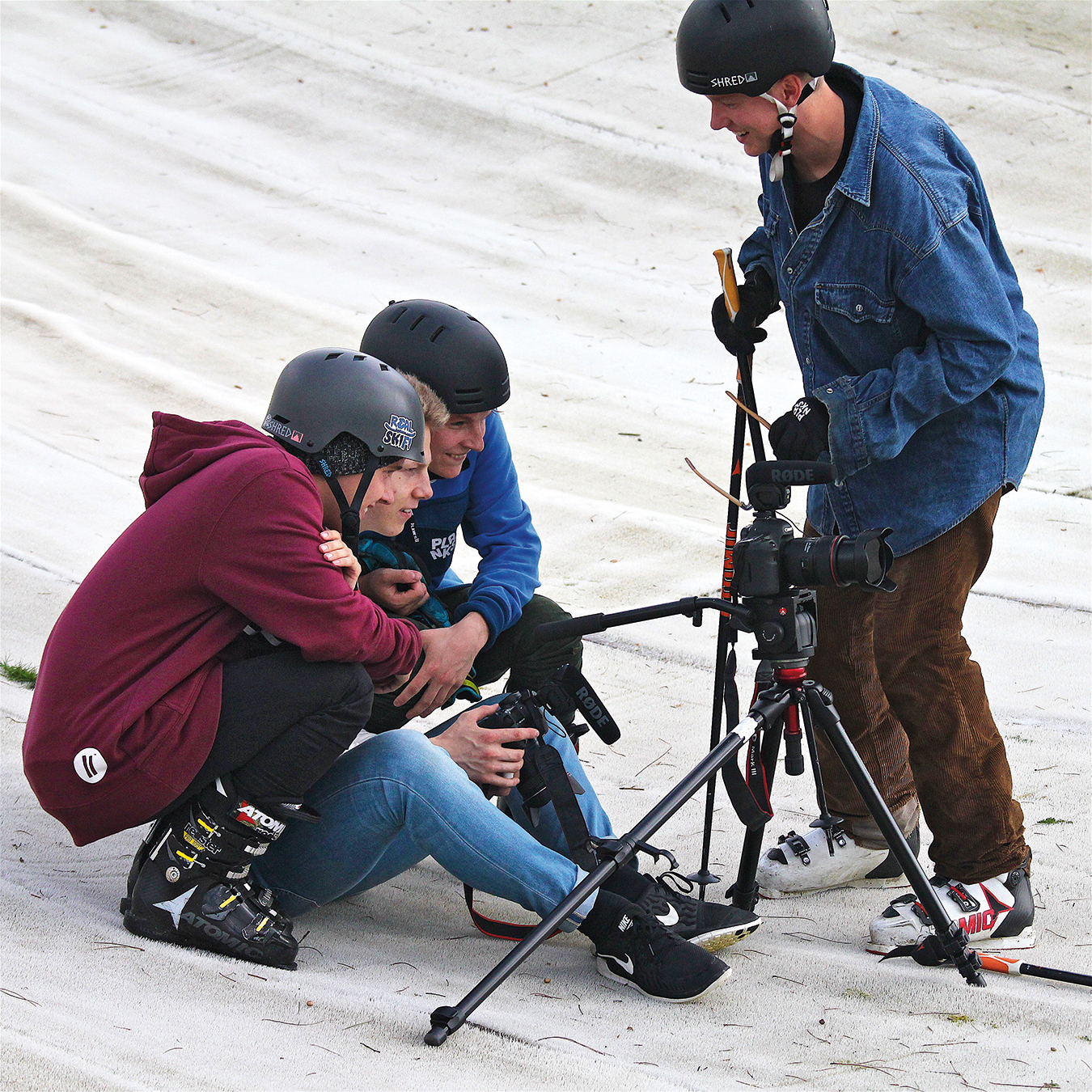 ABOVE Last year we made a special episode in the United Kingdom, which involved a lot of choreographed dry slope skiing. Even though it was challenging, the shots made the whole crew happy. From left to right: Verneri Hannula, Janne Korpela, Ilkka Hannula and Juho Kilkki.
Photo: ROB EMBLING

The four main members of Real Skifi met early on in their hometown of Jyväskylä, Finland, a city of 140,000 residents in the southern part of the country. Janne knew Ilkka from school, and Ilkka and his brother Verneri met Juho on a local ski hill. Real Skifi is now on their 16th episode—their first dropped in February of 2011—but it wasn’t until the sixth that the crew filmed outside their hometown. Before this, they would use public transportation or get rides from their parents. In Finland the legal driving age is 18. Before Episode 6 none of them were old enough to get a license.

Jyväskylä isn’t a classic ski-movie mecca. With minimal snowfalls, elevation and sunlight, wheels seem a better medium than P-Tex, and yet it does have an impressive urban snow history. Many of the town’s features were pioneered by local crews like the Tikut Gang snowboarders. Fittingly, Real Skifi drew inspiration more from Fancy Lad skateboard edits and Think Thank snowboard films than traditional ski films. This unconventional terrain management is obvious when watching any of their episodes. The only thing as remarkable as someone intentionally skiing into a fence to front flip off a parking garage is the thought process that went into the idea in the first place. 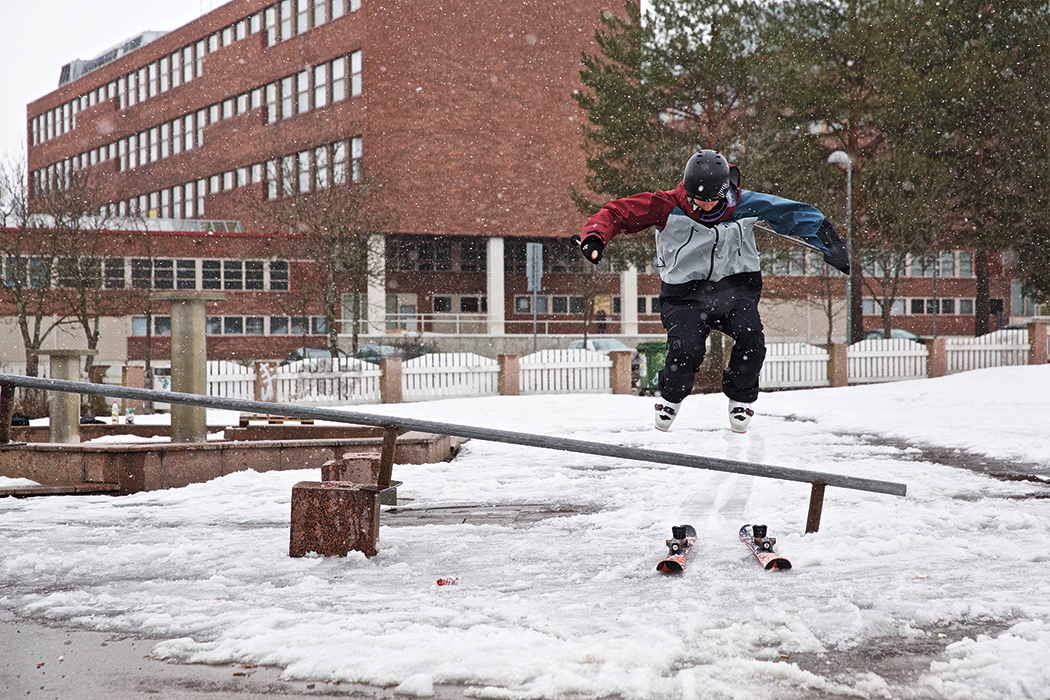 “There is a decent brainstorming process behind most of the tricks,” Janne says. “Some we might come up with on the spot, but usually they are things we’ve been considering for a couple months and just trying to find the proper feature.”

It’s a punishing method, and one that can take literally hundreds of attempts and multiple hours to make happen. And while things may look a bit silly and the boys are definitely having a good time, sometimes it’s easier to push their creativity further than their bodies can handle. 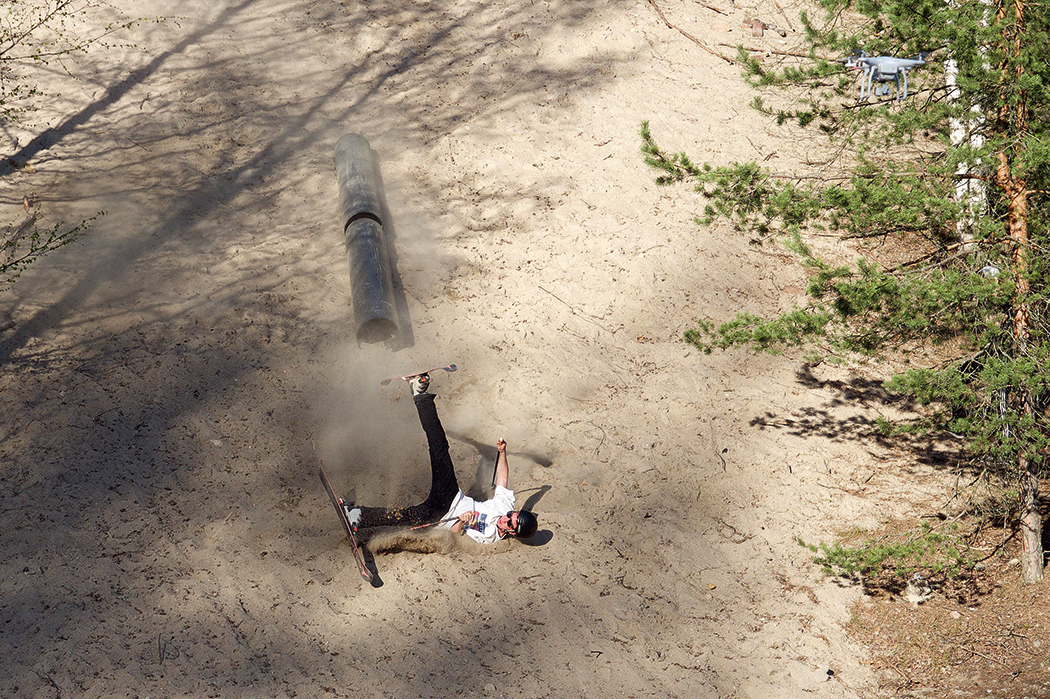 ABOVE We filmed the entirety of Episode 16 without snow, and the various surfaces we used weren’t the most predictable in terms of ski control. Despite the struggles—and the crashes, like this one of Juho Kilkki on the sand jib—it turned out to be the best Real Skifi Episode so far.
Photo: KIMMO KORPELA

“Juho has torn his ACL twice,” Janne says. “Verneri broke his wrist, but he wasn’t filming with us when he did it. A guy who was shooting with us our first season broke his collarbone completely, but that’s probably the worst thing that’s happened during Real Skifi shoots. A lot of scratches and bruises, but nothing serious.”

These days Verneri, Ilkka and Juho live in Jyväskylä, and Janne is currently attending university in Brisbane, Australia, which takes up a large chunk of his winter. That might be a problem for a different film crew, but Real Skifi aren’t bothered by seasons—Episode 16 was shot almost entirely during the summer, using longboards, water, grass and sand as their mediums. Filming for Episode 17 will begin in January, when Janne has a break from school. No matter how otherworldly the next chapter of ski fiction may be, one thing is for sure: they won’t take a moment of it seriously. 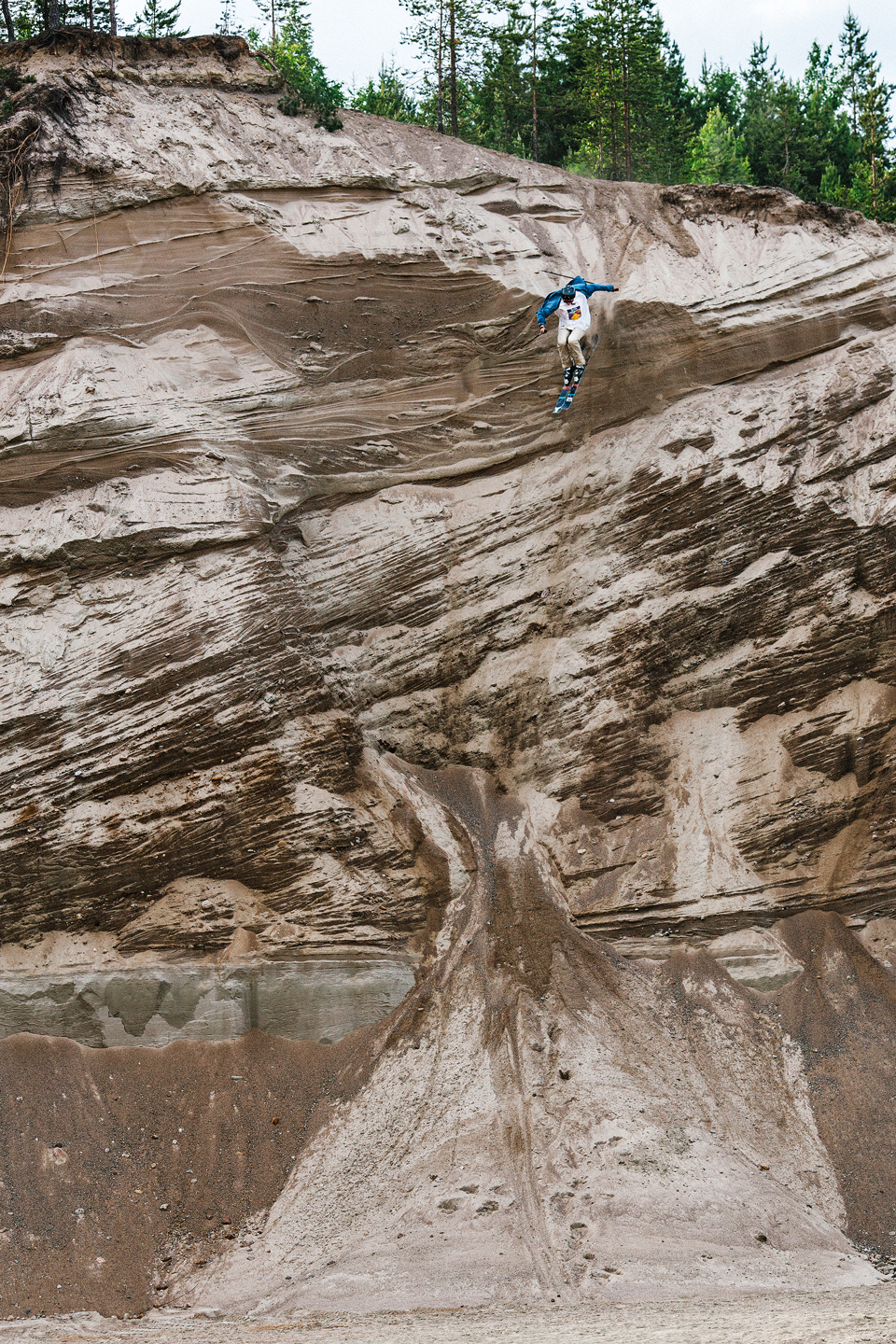 ABOVE One of our goals for Episode 10 was to experiment with skiing on sand hills, but we needed to find them first. When photographer Max Steffansson said he knew of the best in town, we didn’t realize they’d be this amazing. Juho Kilkki stomped this drop with ease.
Photo: MAX STEFFANSSON 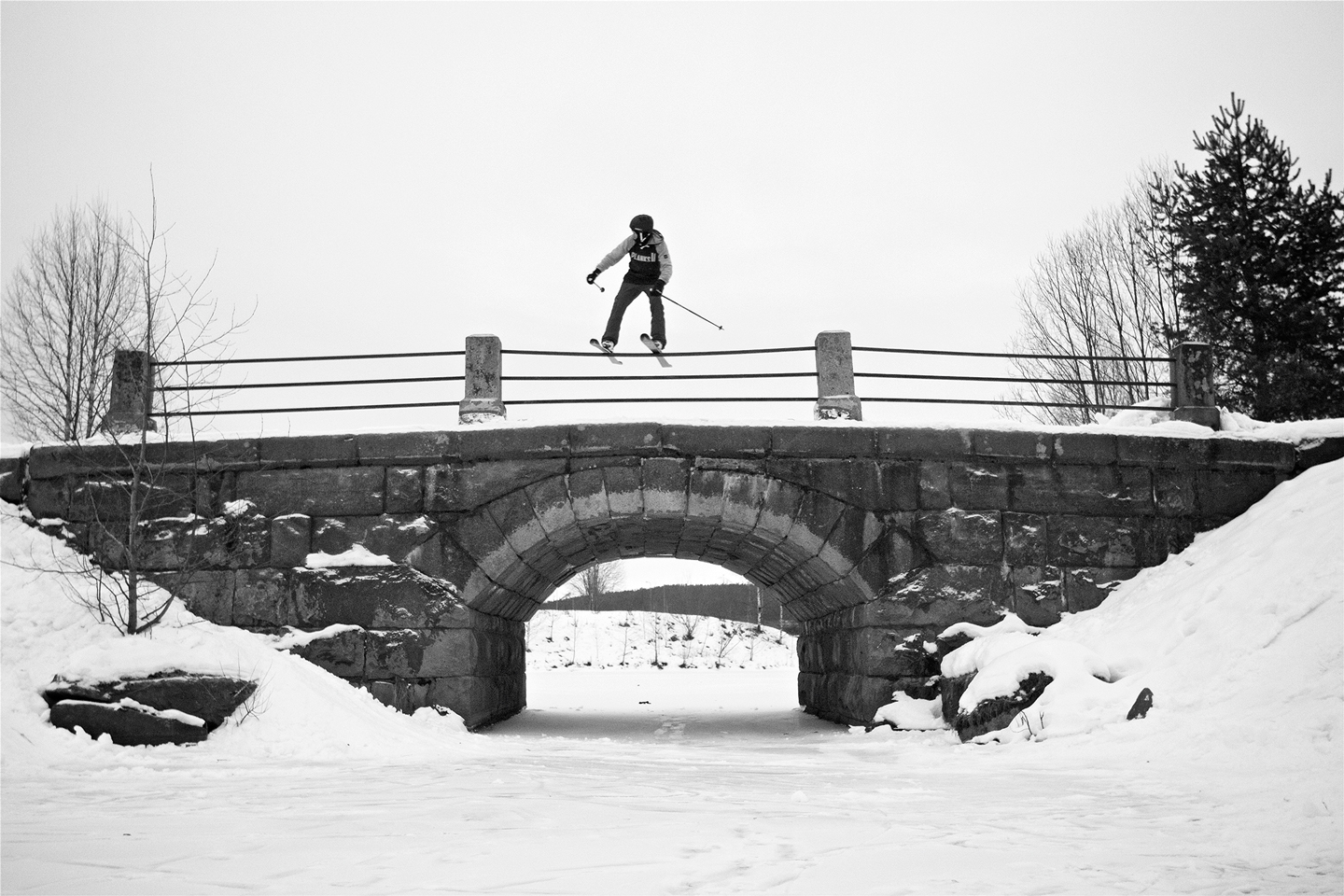 ABOVE Light was fading when we arrived at this rail for Episode 14, but we had a solid game plan and got the cameras and snow set up immediately. Very soon Juho Kilkki was bouncing from rail segment to rail segment, and we got the shot just before sunset.
Photo: JANNE KORPELA