It all began with a photograph.

During an expedition to Russia five years ago with snowboarder Xavier De Le Rue, photographer Tero Repo spotted an image of a mountain in Georgia he’d never seen. The peak was stunning, its craggy bulk a network of snow and rock, with an immense expanse of white at its feet, terminating in shattered chunks of dirty glacial ice. Above it all rose twin summit pyramids, capped with triangles of snow. It was impressive in a way that both beckoned and threatened. “Look at me,” it seemed to say. “Just don’t get too close.”

The mountain was Ushba, at 15,453 feet one of the most prominent peaks in Europe’s Caucasus Mountains. But what made the photograph unique was the angle. Ushba sits just south of the border between Russia and Georgia, a location that leaves the north face inaccessible and largely undocumented.

This image was of that north face, and falling down the center was what looked like a potentially skiable line—potentially being the key word, as it had never been attempted and likely hadn’t even been seen by skiers before. That would soon change, when Repo showed the photo to ski mountaineer Andreas Fransson upon his return to Europe. It was exactly the type of objective Fransson was known for: remote, unexplored, and at the “theoretical” edge of possible. He presented the idea to Sam Anthamatten, a friend and regular ski partner, who was equally entranced.

“The Caucasus have many peaks over 13,000 feet, but Ushba stands alone in the middle,” Anthamatten says. “It gets compared to the Matterhorn in the Alps, or the Grand Teton in Wyoming: a huge, lone mountain, above everything else, with a few skiable lines on it.”

The duo began planning for a trip later that year, but that ended when Fransson tragically passed away in an avalanche in Chile in 2014. Anthamatten put the mission on hold, but he and Fransson’s dream remained in the back of his mind.

Four years later, Anthamatten—along with Markus Eder and Léo Slemett—stood in the tiny village of Mestia, Georgia, determined to make it a reality. 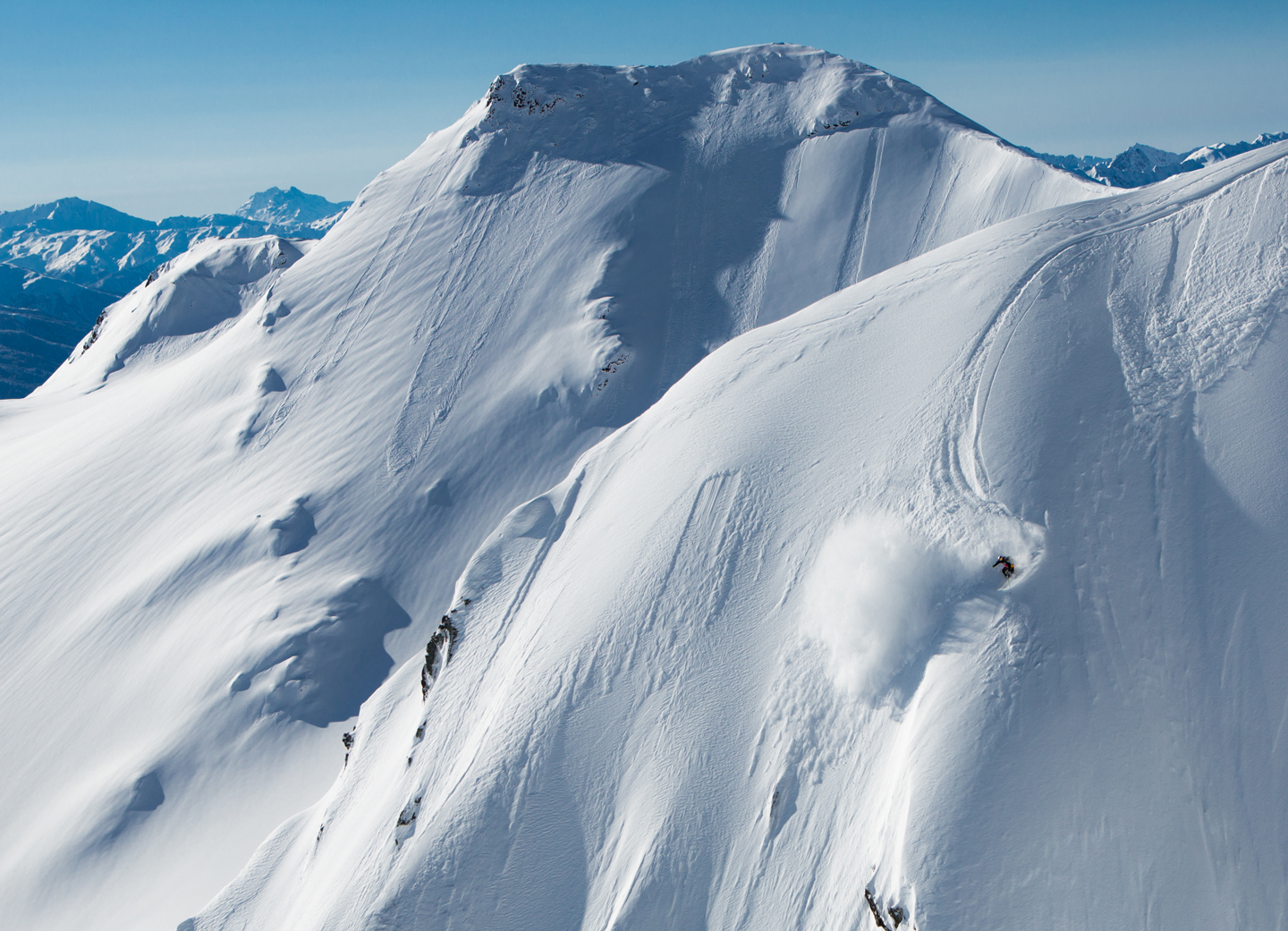 The line from the photograph may have been unskied when the trio landed in the 2,000-person town of Mestia in April of 2017, but Ushba’s treacherous reputation in the mountaineering world had long been established. Known locally as “the Witches’ Sabbath” for its nefarious and mystic nature, Ushba’s higher south summit was first climbed in 1903. In the ensuing century, it has been the site of numerous fatalities, most recently in August of 2012, when an unexpected storm hit a group of climbers.

Even more recently, however, the mountains surrounding Ushba saw a positive development, when it became home for a heli-skiing operation run by a friend of Anthamatten’s (an endeavor requiring a 21-hour helicopter flight from Austria to Mestia’s tiny airport). The village is a mountaineering hub, but is more widely known for its ancient stone towers, once used to defend against marauding bandits. Some are over a thousand years old, and are still home to families who’ve been living there for centuries.

That doesn’t mean the town is a backwater, or a war zone. The city court and police station are both ultra-modern, as is the terminal for the Queen Tamar Airport, which looks like a melted, glass “L.” The people, Anthamatten says, are some of the kindest and most trusting he’s ever met; the alpine valleys of the Svaneti region have mostly escaped the conflicts between Russia and Georgia, which has left locals largely undisturbed.

But cattle still roam the streets, and most of the vehicles date back to the Soviet era. It was a shocking contrast for a team of ski mountaineers about to board a helicopter.

“It’s an unreal place, where life is a generation or two behind where we are in Europe,” says Anthamatten. “Many of the people have never left town, and only a few younger guys speak English. There’s so much tradition, a thousand years of history you can still touch. To be there heli skiing is this crazy mix of two worlds.”

As the crew explored the mountains surrounding Ushba via helicopter, those two worlds became even crazier. It was no accident Anthamatten chose Slemett and Eder to accompany him on the trip; it’s a rare skier who can both handle huge heli-assisted lines, and then turn around for a technical, 10,000-foot ascent. What had begun as a scouting mission for a far-flung, human-powered expedition turned into some of the best skiing of their lives.

It left Anthamatten, Eder and Slemett with high hopes as they headed back home at the end of April. The plan was to return sometime in the next two months to summit Ushba, waiting until conditions looked the most ideal. There was just one problem: those conditions were nearly impossible to check.

“The whole line looks towards Russia, so we didn’t have trustworthy information,” says Anthamatten. “From the beginning of May until the end of June we were at home, wondering if we should go or not. We were in contact with some local guys, who ran up the glacier to take photos for us. By the time we had to decide, we had a total of three pictures. We didn’t really see it for the first time until we were standing on the glacier ourselves.”

It wasn’t until early July that Anthamatten, Slemett and Eder were back in the streets of Mestia, strapping their skis to two horses for the journey to basecamp. This time, there would be no helicopters. It was all human (and horse) power from here to the top—a long journey, considering it’s over 10,500 vertical feet from Mestia to Ushba’s summit.

The previous month, a friend of Anthamatten’s—Slovakian ski mountaineer Miroslav Peto—had made a successful descent of Ushba’s southwest side. But even with that knowledge, the trio’s first look at their own objective didn’t inspire much confidence. Even from basecamp, it was obvious the north face was covered in ice, making a descent unlikely at best. But you don’t become world-class mountaineers without a healthy dose of tenacity.

“I don’t know if I was being realistic or pessimistic, but the first time I saw the face I knew it probably wasn’t skiable,” Anthamatten says. “Still, when Markus and Léo suggested we should try, I agreed. From far below it may not look good, but we hadn’t been in the region before so maybe somehow it was. It’s what we’d do if we were there without skiing in mind, so why not go for it?”

The group decided to bump camp to the foot of the Ushba Glacier, and then on to advanced basecamp at an elevation of just over 13,000 feet. At this point, there was little hope of skiing from the summit, but the group still carried their skis as far as possible, eventually dumping them at a bergschrund in favor of crampons and ice axes. Conditions weren’t just bad; they were getting worse, as they traversed snow bridges on the way up the glacier that were completely gone a few days later.

After navigating the cornice-capped, half-mile-long ridgeline approach, the group finally reached the top. Huge peaks stretched out in all directions, including Mount Erebus, the highest in Europe. For Anthamatten, it was the culmination of a half-decade of preparation, and made for a bittersweet victory.

“This is something I’d wanted to do for years, and after that long so much tension had built up,” he says. “Then we were waiting for this tiny window, not too early, not too late, with almost no information. Personally, that’s one of the hardest things as an athlete. You’re planning and waiting, and you want to achieve, but when you finally get the opportunity to try it’s already over.

“The other side of that is also being realistic, being okay with the conditions you find. As a mountaineer, if you don’t accept that, you don’t live long.” 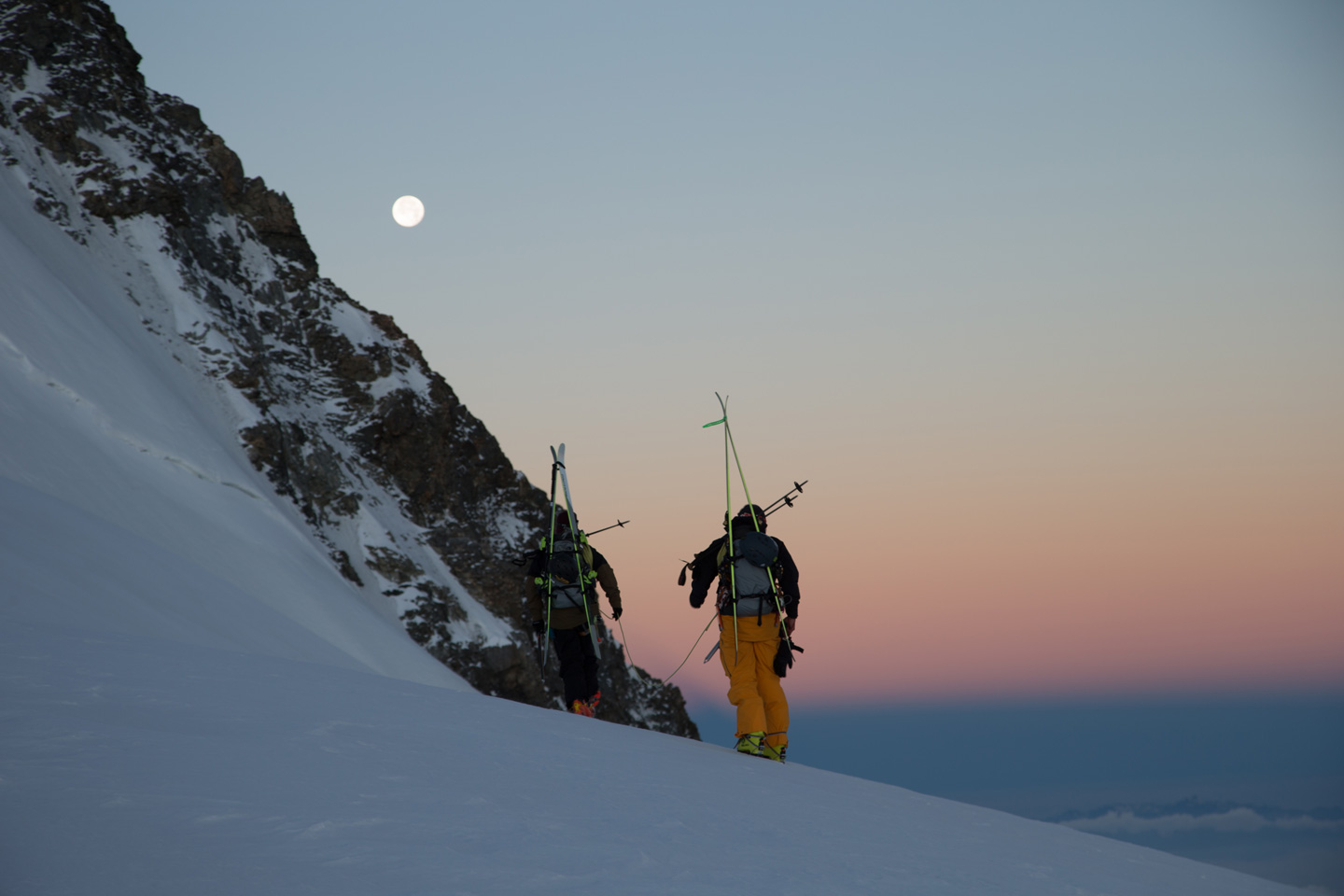 Half a year after the group first laid eyes on it, the line down Ushba’s north face remains tantalizingly unskied. But sometimes there is a good side to failure: getting to try again, and Anthamatten hasn’t given up on the dream he and Fransson hatched over a single photograph. He will be returning to the region next April, this time as a guide, and hopes to do some more first-hand scouting for future missions. Because in the end, the summit may be the goal, but it’s just one point along a larger journey.

“I want to see how it looks myself,” he says. “If it’s better than last year—well, we’ll just do the whole thing again. It is something that may take years, but that’s all part of the bigger adventure.”

Presented by The Ski Journal, in partnership with 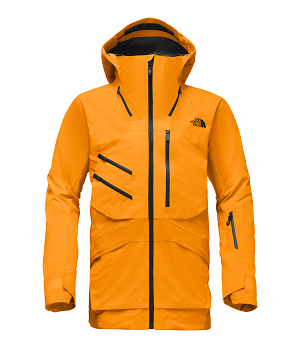 To celebrate the release of their “USHBA” film, The North Face has been kind enough to give away both a men and women’s setup of Fuse Brigandine Jacket and Bibs. That’s right: jacket and bibs for two different winners, one in women’s and one men’s.

The Fuse Brigandine Jacket and Bib are designed to battle the elements, whether you’re skinning uphill from base camp or dropping from above tree line, and the hyper-durable 3L GORE-TEX® is designed to keep you dry in all conditions.