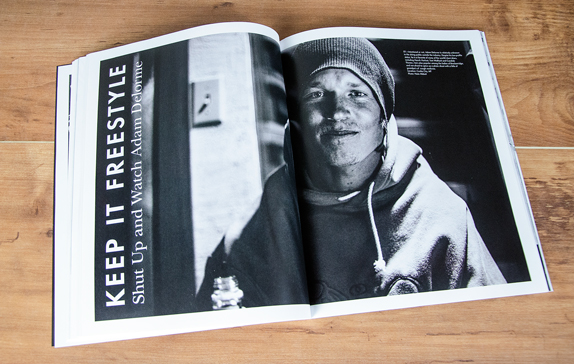 On the often-flashy stage of the professional ski scene, Adam Delorme is somewhat of a dark horse: low-key, unassuming and with few ambitions beyond skiing all day, every day. With a talent as impressive as it is innovative, the Colorado resident continues to step quietly into the spotlight and earn a following within the highest levels of the ski world. Keeping it freestyle with Adam Delorme.

On November 20, 2013, four months before the world would get its first look at Olympic slopestyle skiers in Russia’s Caucasus Mountains, many of the 2014 hopefuls from around the world lapped early season jump line in Breckenridge, CO. Some wore Red Bull helmets, others were shadowed by personal filmers. They waited in a pack at the top of the park, maybe 50 in all (including everyday Joes), watching each other drop in. Their coaches watched from the side.

Every 10 minutes or so someone would hesitate, and a 6-foot-2 skier dressed in black would dart in from the edge of the pack. Sometimes he skated down the in-run for extra speed. Everyone paid attention when he did, because they knew he might do something next that no one else could do.

Adam Delorme, the man in black, carries rare cred among big-name skiers. Quebec’s Phil Casabon, a leader in street and park skiing, calls Delorme’s style “my favorite out of anybody. He’s had a very big impact on the way I ski today.” …