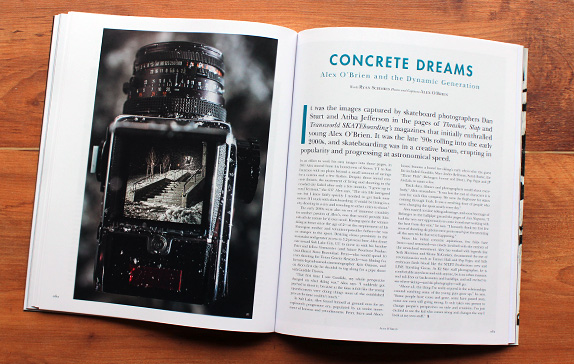 Originally inspired by images in Thrasher, Slap and Transworld SKATEboarding, Alex O’Brien’s initial concrete aspirations wilted in the urban bustle of San Francisco, CA. Turning east towards the mountains of Utah, he quickly found snowier inspiration in Salt Lake City, the hotbed for one of skiing’s most progressive eras. Over a decade later, from old guard to fresh faces, few photographers have been—and remained—as closely involved with the entirety of the newschool movement. Old guard to fresh faces with Alex O’Brien.

It was the images captured by skateboard photographers Dan Sturt and Atiba Jefferson in the pages of Thrasher, Slap and Transworld SKATEboarding’s magazines that initially enthralled young Alex O’Brien. It was the late ’90s rolling into the early 2000s, and skateboarding was in a creative boom, erupting in popularity and progressing at astronomical speed.

In an effort to work his own images into those pages, in 2001 Alex moved from his hometown of Stowe, VT to San Francisco with no plans beyond a small amount of savings for a camera and a few flashes. Despite those initial concrete dreams, the excitement of living and shooting in the crowded city faded after only a few months. “I grew up in rural Vermont,” the 6’6” Alex says. “The city life intrigued me, but I knew fairly quickly I needed to get back near nature. If I stuck with skateboarding, it would be living in a city, shooting in a city and traveling to other cities to shoot.”

The early 2000s were also an era of immense creativity for another passion of Alex’s, one that would provide him with all the nature he’d ever need. Having spent the winters skiing at Stowe since the age of 2—at the requirement of his Norwegian mother and volunteer-patroller father—he was no stranger to the sport. Desiring closer proximity to the mountains and greater access to 3.2-percent beer, Alex drove east toward Salt Lake City, UT to move in with his brother Peter and fellow Vermonter (and future Poorboyz Productions filmer) Steve Rozendaal. Peter—who would spend 10 years shooting for Teton Gravity Research—was filming for freestyle-legend-turned-cinematographer Kris Ostness, and on Alex’s first day he decided to tag along for a pipe shoot with Candide Thovex.