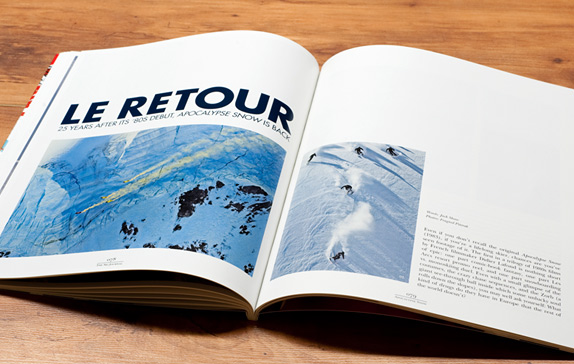 Zorbs, squirrel suits and monoskis–who says they’re stuck in the 80s? With the recent remake of Apocalypse Snow, this time with hardly a budget to speak of, the Eurocentric Classic returns on the producer’s own terms.

“Even if you don’t recall the original Apocalypse Snow (1983), if you’re a lifelong skier, chances are you’ve seen footage of it. The first in a trilogy of 1980s films by French filmmaker Didier Lafond is nothing short of epic: one part comic-book fantasy, one part Les Arcs resort promo reel, and one part snowboarding vs. monoskiing duel. Even with a small glimpse of the costumes, the crazy chase sequences, and the Zorb (a giant see-through ball inside which some unlucky soul rolls down the slopes), you may ask yourself, what kind of drugs do they have in Europe that the rest of the world doesn’t?”