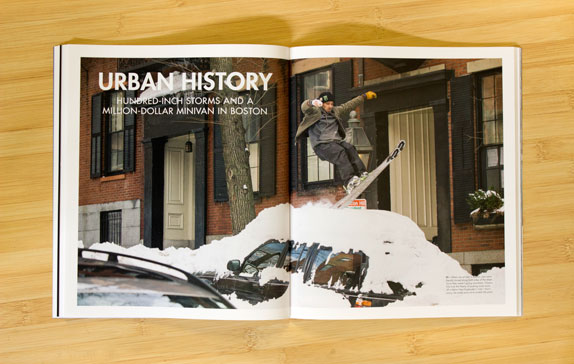 With a heritage stretching back centuries, Boston, MA is home to 58 National Historic Landmarks, including the first battle site of the Revolutionary War and the oldest African American church in the US. When a barrage of storms last season covered the city in a record 100-plus inches of snow, a crew of skiers decided to add their own mark to that legacy…newschool style.

The best way to avoid getting kicked out of an urban feature in Boston is to lie about Ben Affleck. As for Matt Damon references? Not so much.

This epiphany came while hitting our first rail in the capital city of Massachusetts, at the wisdom of East Coast snowboard icon Stephen Pleines. The landing was onto one of the busiest roads in Boston, and like every other feature in the city it was buried under multiple feet of snow. Pedestrians were constantly stopping to ask what the hell was going on (in blunt Bostonian fashion), and we needed time. We needed a distraction. Pleines told us not to worry. He had us covered.

Despite being in plain sight, the cops didn’t show up until after Cam Riley had nailed his trick. It wasn’t until later that Pleines revealed his tactic: he had been blatantly lying, telling them Matt Damon was at the top of the stairs, but Ben Affleck was hanging out one block up the street. Somehow, it worked—everyone opted out of waiting for Mr. Damon in favor of seeing Mr. Affleck…