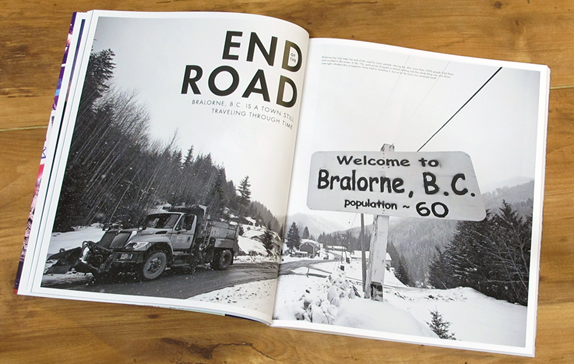 A short distance but a long drive from Whistler, BC is a mining town still traveling through time: Bralorne, where a private heli is a little more common than you may think. The police only come for New Years, the ratio of chainsaws to residents favors the Stihl and the mountains rising above are now mined for their powder more than their ore. Welcome to Bralorne, BC, population 60.

The mountains rise up.

Well, of course it’s never quite that easy. To start, there are these things called “terranes” floating around the earth’s lithosphere. They aren’t the massive tectonic plates of continents or anything like them, but rather, leftover bits of this and that—chunks cleaved from larger land masses, oceanic ranges, volcanic island arcs—drifting between the big guys. Continental crumbs, really. How they end up where they do is sort of a cosmic game of Rubik’s Cube. All skiers need to know is this: terranes move at about the same rate your fingernails grow, maybe two inches a year, but (and you’d have to view a time-lapse film from God’s GoPro to see this) they aren’t particularly gentle. They take a run at it from out in the ocean, slamming into continents, causing massive bending and folding and pressure and heat. Wrinkling and metamorphosing the rock they come into contact with, shoving it up, up, up.

They leave behind what skiers like: big mountains next to an ocean…