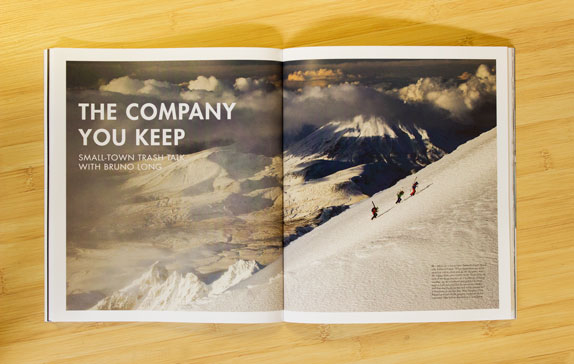 Many ski photographers have built their reputations jet-setting around the globe; Bruno Long, on the other hand, has built his reputation through staying put. Plying the mountains around his hometown of Revelstoke, BC with ski mountaineering greats like Greg Hill, Bruno gains inspiration from the people and small-town vibes that surround him—be they blue collar or big-mountain bonkers.

Bruno Long is a master of smack talk.

The first time I met him was at the Fairy Meadows Hut, north of Golden, BC. I was directing an episode for Salomon Freeski TV, and as the terrain surrounding Fairy Meadows is notoriously big, I wanted a photographer whose mountain skills were as solid as his photography. Professional skier Chris Rubens vouched for Bruno, and so he joined us.

Rubens’s recommendation was spot on. Obviously comfortable in whatever the conditions, Bruno’s photos also proved to be impressive. But it was his wit and trash talking that impressed me most. When sharing a ridge for hours, conversation can get weird. And weird it got, poking fun at anything, everything and each other…