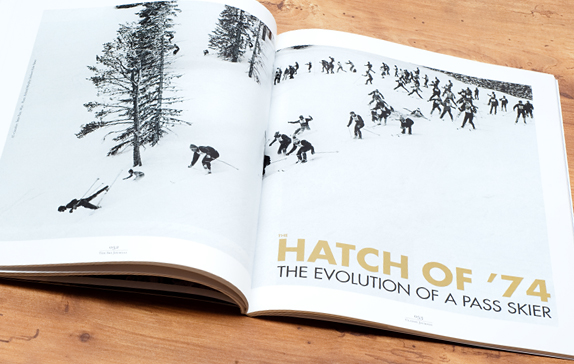 Life was good for backcountry skiers in the post Vietnam-era in the
Tetons—no one was there. “Hatch of ‘74” and Wilson, WY local Keith Benefiel
recounts a day when gear was primitive, stashes were sacred, and a house in
the valley cost a mere $100K. Times have changed, but the reasons people
still flock to Jackson Hole, as Keith explains in exceptional prose,
haven’t. Featuring the photography of Angus Thuermer Jr.

“Splish, splash. The sodden crowd scrumming with the Franklin stove sent up clouds of steam to rival a Yellowstone fumarole. Water seeped from every fiber of cotton and heavy wool, hissed on hot iron. Puddles formed around leather boots. The occasional clump of slush calved from between back and sweater. Splut!

This was not the upscale Euro-mode ski clientele Bernard had envisioned when he built The Heidelberg, a restaurant and bierstube in the Bavarian style at the bottom of Teton Pass. We had collective coin for maybe a couple rounds of the cheapest draft before driving or hitching back to our respective hovels on both Wyoming and Idaho sides of the range...”