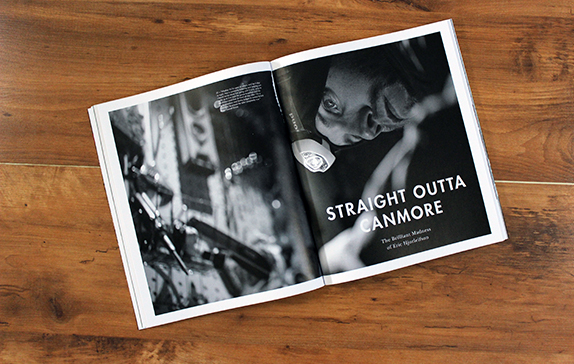 Hailing from the small town of Canmore, AB, Eric Hjorleifson is known for many things—flashing huge lines and stomping monster pillow stacks, as well as redefining the limits of backcountry gear and alpine touring in general. However, before his big-mountain legacy Hjorleifson was one of the best park skiers in the world, a jib kid who willingly stepped away from jumps and into the mountains to become one of the first true big-mountain freestyle skiers—and one of the sport’s most innovative minds.

It’s about 11:00 p.m. when I first meet Eric “Hoji” Hjorleifson this spring. We’re supposed to be up at 6 the next morning for a sled mission up Rutherford Canyon, near his home town of Whistler, BC. After handing me a pilsner—a beer whose likeness graced his first pro model skis—he tells me he needs to “quickly” put his boots back together.

As usual they’re deconstructed for tweaking, and after seeing my own pair of boots (a model he designed) he says he can also make some improvements on those, and invites me downstairs to his shop—or “Pain Cave,” as it’s been dubbed by friends and cohorts.

Bedecked in a flannel hunter’s cap and Wolverine-esque backwoods facial hair, Hoji has no formal training as an engineer. But after only a few minutes in the Cave—a modified storage unit in the basement of he and his girlfriend Jen Ashton’s condo—there is no doubt he’s a born inventor…