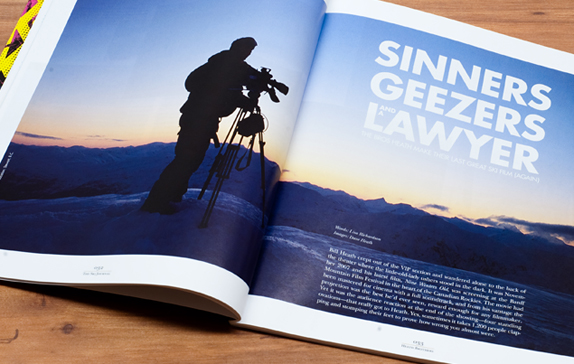 Bill Heath and younger brother Dave left Calgary for Nelson in the early
1980s, and the B.C. interior has never been the same. Contributor Lisa
Richardson catches up with the talented filmmaker and legendary photographer
on their home turf to discuss the filming of Nine Winters Old, Bill’s
award-winning paean to snow and the runny-nosed kid in every skier.

“Bill Heath crept out of the VIP section and wandered alone to the back of the theater where the little-old-lady ushers stood in the dark. It was November 2007 and his latest film, Nine Winters Old, was screening at the Banff Mountain Film Festival in the heart of the Canadian Rockies. The movie had been mastered for cinema with a full soundtrack, and from his vantage the projection was the best he’d ever seen, rewards enough for any filmmaker. Yet it was the audience reaction at the end of the showing—four standing ovations—that really got to Heath. Yes, sometimes it takes 1,200 people clapping and stomping their feet to prove how wrong you almost were…”