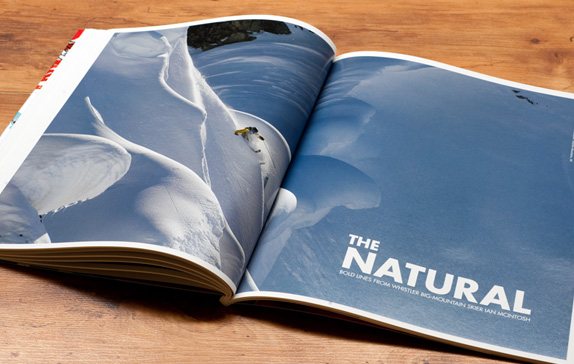 Fernie, BC native Ian McIntosh is known for his aggressive skiing–fast and powerful, with an uncanny feel for the mountains. Raised in the backcountry, it just comes naturally.

“The first time I saw the kid ski was through the end of a 200mm zoom lens. It was during a qualifier in the bad ol’ days of the Canadian Freeskiing Championships, Whistler’s annual stop on the IFSA tour. Late in the round, he rocked off the top of Blackcomb’s Chainsaw Ridge and dropped the boldest line of the day, sending it off a huge cliff, sticking it at balls-out speed and straight-lining to the bottom through nasty avi debris. The buzz among the dedicated clutch of onlookers lodged in the bottom of the bowl—used to the diverse heroics of the likes of Hugo Harrisson, Jeff Holden, Bryce Philips, P.Y. LeBlanc, Moss Patterson and a parade of French superstars—morphed to the loudest cheer of the day.

‘Who the f— was that?’ crossed more lips than mine…”