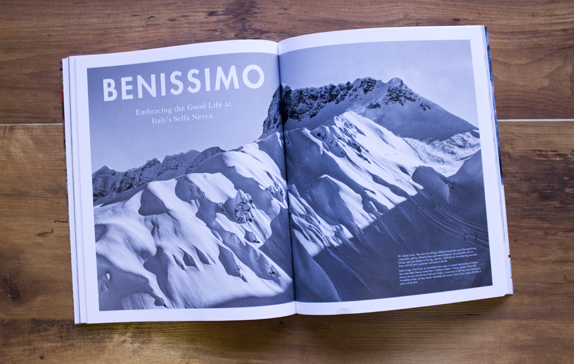 Located high in the Julian Alps of northeast Italy, most foreigners haven’t heard of Sella Nevea—the tiny operation is over two hours from the nearest city and served by a single, family-run hotel. The demure reputation, however, belies some of the most impressive and easily accessible terrain in southern Europe—and an exuberantly Italian cast of characters. When a small crew of skiers travel to the area for a hundred-year storm they find that in Sella Nevea, the more you love the place, the more it loves you back.

When we arrive at Italy’s Sella Nevea Ski Area it is pouring rain to the top of the resort, washing away what had to that point been a hundred-year storm. Looking out the Hotel Canin’s utilitarian, eastern-European style windows, the resort’s 3,780 feet of vertical—punctuated by pillow lines, massive spine faces, and snaking couloirs splitting huge limestone cliffs—are obscured by the incessant downpour.

It would come as no surprise if you’ve never heard of Sella Nevea; most non-Italians haven’t. The only resort in Italy above 6,500 feet, Sella Nevea perches between Jof di Montasio and Mount Canin in the northeast Julian Alps, catering to the nearby towns of Tarvisio and Chiusaforte. It’s a quiet, mom-and-pop-style operation, served by a handful of small lifts, a gondola and a tram, the top of which connects with the Slovenian ski area Bovec and accesses the incredible (if currently soggy) terrain out the window. Sella Nevea sees few foreign faces on its slopes. It does, however, receive impressionante amounts of snow, a respectable average of nearly 450 inches…