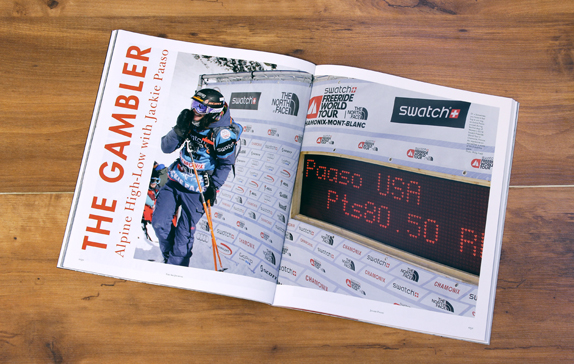 While most championships are won through steady success, redefining the status-quo often means betting it all—something that Freeride World Tour veteran Jackie Paaso has based her career around, sending big lines and even bigger airs. Whether she stomps or blows up, for Paaso it’s more about pushing limits than stacking scores and podium time. Rolling the dice with Jackie Paaso.

Jackie Paaso is standing at the starting gate of the Chamonix, France stop of the 2014 Freeride World Tour (FWT), ski tips pointed fall line and jaw clenched. The starter gives the green light and she pushes off.

Arcing fast, steady turns through shin-deep powder on the La Flégère ski area’s Aiguille Pourrie face, she doesn’t hesitate before launching a massive, 40-foot cliff band. If she stomps, she could win the contest. If she crashes…well, chalk it up to another one of Paaso’s gutsy maneuvers gone wrong.

This time things go her way. She sticks the landing cleanly, slicing super-G turns the rest of the way down the venue. Judges give her a score of 80.5, enough to start her season with a victory…