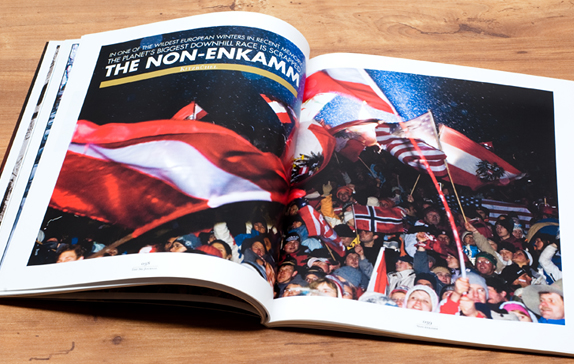 The world’s best attended and most dangerous downhill racing event hit a bump in the road last season when low snow and hurricane winds forced a rare cancellation. Still the party went on only as it does in the Austrian Alps on Hahnenkamm weekend, where legends are made and wills (and bones) are broken in nanoseconds. Plus, a gallery of stunning alpine artwork by 1930s painter and Kitzbühel native Alfons Walde.

“The legendary Mousetrap drop near the start of Kitzbühel’s equally legendary Streif downhill course is a truly monstrous sight, particularly when you are perched on its brink contemplating the tiny margin between bravery and insanity that inspires the world’s best ski racers to hurl their muscled physiques over this precipice every January. Shuffling a little closer to the edge I wonder how many glasses of Schnapps it would take to coax myself over the precipice at full tilt. Even today with the opportunity to pause beforehand, knowing the course is not at its icy worst, it is a daunting prospect…”