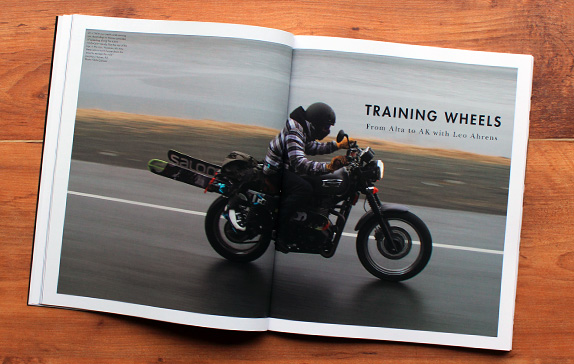 From his refusal to remove his training wheels at age four, Leo Ahrens’ determination to do things his own way has been obvious. And while he still isn’t quite sure why he made the mid-winter, 2,500-mile journey from his home in Salt Lake City, UT to Haines, AK via motorcycle, the trip is just another reason the two-wheeled road warrior has earned a reputation as one of skiing’s most dedicated—and adventurous—up-and-comers. From Alta to AK with Leo Ahrens.

Between puddles in a WalMart parking lot in La Grande, OR, Leo Ahrens holds his wet sleeves out like Rio de Janeiro’s Cristo Redentor. Friend and traveling partner Nate Cahoon is orbiting around him, spooling out a tube of plastic wrap. It crisscrosses up Ahren’s torso and chest before spiraling down his arms. His fingers are white and red, pruned and aching as he wiggles blood back into them. Ahrens’s 150-pound frame looks almost bulky as he pulls on a sodden leather jacket, the lining of which catches the plastic wrap and makes him fight his hands out the ends. Cling wrap bunches in his armpits and he walks with his elbows wide like he’s holding an invisible TV.

With a motion that requires grabbing the bars while leaning his whole body, Ahrens awkwardly swings onto the saddle of a Triumph Scrambler 900 motorcycle. As the café racer’s engine grumbles to life, he pushes iridescent ski goggles snug against the brim of a motorcycle helmet. Twisting the throttle, he merges into red taillight glow.

In the misty river of freeway traffic, he coasts at 50 miles per hour in the slow lane. The three-day-old Utah license in his wallet is unscuffed. At 4,000 rpms, the motorcycle engine overpowers all other sound. A semi sails past his left shoulder. In the blast of turbulence and spray that follows, Ahrens struggles to hold his line.