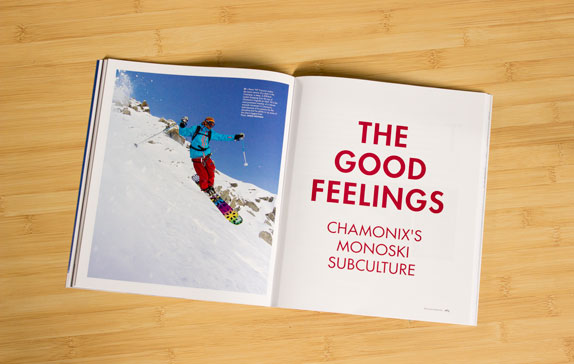 The monoski has become somewhat of a social stigmata, used more often as a retro-day joke than a serious descent tool. But in Chamonix, bastion of the world’s best steep skiing, a diehard group of monoskiers has remained, ticking off big lines and earning the repsect of legends like Seth Morrison and Glen Plake.

The Mallory is a complicated, 55-degree descent on the North Face of Chamonix, France’s Aiguille du Midi. The route’s multiple rappels and fatal exposure leaves no room for mistakes, and it takes an exceedingly good snow year to draw theChamonix locals. The spring of 2013 was one of those years, so it wasn’t a surprise when 28-year-old extreme skier and instructor Jeremy Picq made his first descent of the Mallory that April. What was a surprise—except to the locals—was when he returned the next day. On his monoski.

The monoski descent wasn’t an anomaly for Chamonix. Jeremy is just one of a growing community of local monoskiers plying both the big, high-consequence lines and the pistes around the area. And, with the encouragement of this dedicated community, new converts are made every day…