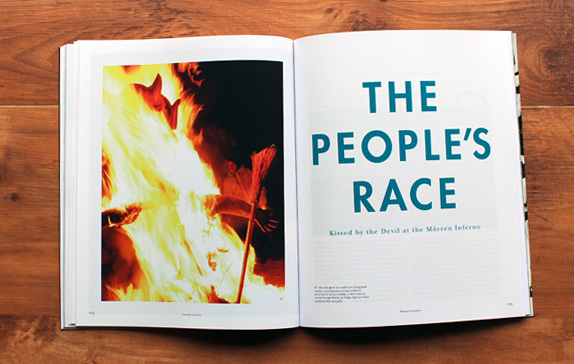 Begun in 1928 by Sir Arnold Lunn—a father of alpine racing—Mürren, Switzerland’s Inferno race is the oldest amateur ski race in the world, descending 6,500 feet over nine miles. From the initial twelve competitors to the current 2,000-racer roster, the Inferno has become a true people’s race, drawing competitors of all types from over 20 countries. Schnapps, steeps, and a scorched Satan at Mürren’s Inferno.

Out of the darkness, the devil emerges.

Cast in the rosy glow of hundreds of torches, he floats through Mürren, Switzerland’s cobblestone streets, past 19th-century farmhouses and sleds propped up outside of pubs. Cowbells clang in time with the marching band that trails behind the horned effigy. Hundreds of children, villagers and amateur ski racers—some wearing devil masks, others carrying candles—join the procession, winding through the village in a fiery snake toward the devil’s final resting ground. He is going to burn.

It is a clear, very cold night in late January on the eve of the Inferno, one of the oldest and longest downhill races in the world. The next day, many of these revelers will descend nine miles from near the summit of the Schilthorn, the 9,744-foot peak that rises above Mürren, down 6,463 feet into Lauterbrunnen, a traditional Walser village-turned-BASE-jumping mecca at the bottom of the valley. The Walsers are a group of Germans who migrated into the Swiss Alps more than 700 years ago, who still speak a unique version of the language and hold to a very definitive, mountain-specific culture—a perfect finish for a historic race. First organized by Sir Arnold Lunn in 1928 with a total of 12 racers, the Inferno today is the largest amateur ski race in the world, drawing nearly 2,000 competitors from more than 20 countries.