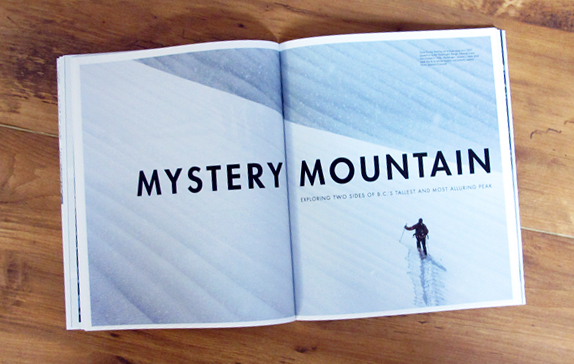 Mount Waddington, the highest in BC’s Coast Range, was first climbed in 1936. Yet, partly due to it’s location and partly due to it’s inclement weather, it remains a rarely-traveled and rarely-skied massif hanging above the north coast’s Bute Inlet. In the spring of 2011, two groups traveled to Waddington on entirely different terms: one for a self-powered sail, climb and ski from the west, the other on a guided powder skiing mission from the east with Pantheon Heli Skiing. From near-death to near-perfection, contrasting perspectives on the mountain they call Mystery.

They say death comes quick. For me, it seemed to be arriving in slow motion. A whiteout had risen from the valley faster than my partners and I could descend. Apprehension consumed me as I worked the tail rope of the gear sled. The sled was an anchor, albeit a necessary one–150 pounds of supplies causing cursing fits.

“This is bad, man. We’re blind in this icefall!” I yelled to Ryan, standing twenty feet away. Our topo map deemed the icefall “difficult,” but direct passage to the Tiedemann Glacier outweighed easier alternatives. Our route steepened as I pulled alongside Ryan, aching from dreadful snowplowing. Stopping beside the sled, a deafening crack boomed from my feet as a chasm opened beneath me. Ryan drew back and I pitched forward into the hole. Clawing and scratching, I gripped the tail rope and pulled the sled into blackness. Everything slowed down; strange calmness took over. I was weightless and unroped–time froze in the icy depths of the Waddington Range. “This is how it all ends,” I thought. Of course, I was wrong…