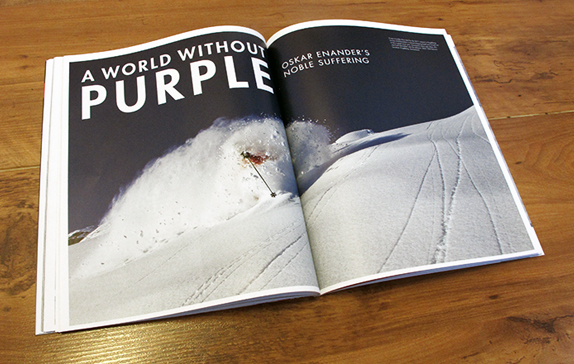 Oskar Enander is colorblind: he confuses green, red and brown, yellow and green blend together, and he can’t see purple at all. But from icy Norwegian docks to the halls of photography’s most elite, Enander has proven himself a master of light, shadow and the bigger picture. And when the camera comes out, it’s 110-percent business time.
Words: Stephan Drake

In 2002, my Swiss friend Cyrille Boinay and I had the bold and financially-questionable idea to start a ski company, and for the first critical year we holed up in his native Switzerland to nurture ideas and business plans. As two spoiled graduates of the early Las Leñas crew, we were always on the search for the globe’s next undiscovered spot, and after a season hanging out in Engelberg, Switzerland, Cyrille became convinced it was the place from which to brew our plans for global domination.

He was right—besides the 20 or 30 Swedish and Norwegian ski bums crammed into the Hotel Bellevue across from the small town’s train station, no one was going off-piste in Engelberg. Among the Scandinavians was a tall, shaggy-haired young Swede from Gothenburg who had just bought a camera and was taking a stab at shooting skiing. We were going to need some strong images to spice up the marketing for our new venture, and Cyrille suggested we give the hopeful photographer a try…