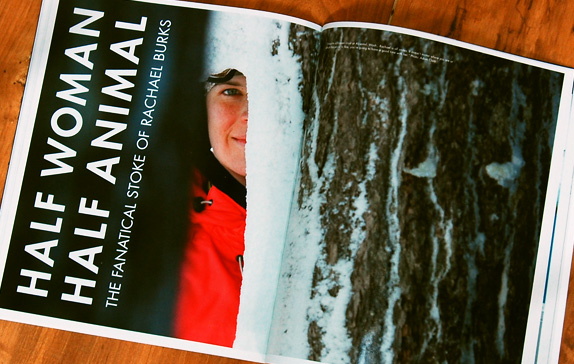 Rachael Burks is known in the ski world as much for her vivacious personality as her tenacious approach to skiing the burliest lines possible: if at first you don’t succeed, try again. But few know who Rachael is off the mountain. From SLC to Texas and back again, Jackie Baker consults friends and family to expose both sides of Rachael Burks: half woman, half animal.

“We saw this girl in a pink one-piece, standing atop a beast of a cliff,” he recalls. “She sent an enormous backflip and stomped it. But when she skied up to us, she was literally frothing at the mouth. Her goggles were sideways, her helmet was about to fall off, and snot was spewing everywhere. But underneath it all, was this huge smile.”