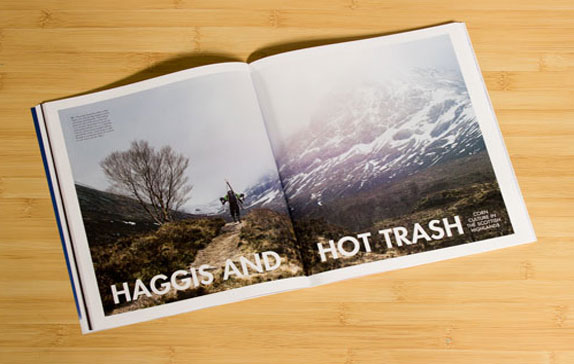 Scotland is famous for many things; skiing, however, not among them. But hidden in the Scottish Highlands, home to the tallest mountains in the United Kingdom, is a hardy and colorful snow culture stretching back generations and encompassing tens of thousands of mountain zealots. It’s a place of world-class Scotch, homemade haggis and some surprisingly steep mountains.

As I finish drying my hands at the sink and carefully retrieve my fourth pint of stout from the counter, a group of five drunk men in kilts burst in, their belligerent yells filling the bathroom. These guys are huge, part of a rowdy wedding party in the main room of the pub in Glasgow, Scotland. I can’t tell if they love each other or are about to fight. I don’t think they know, either. I slide out the door, leaving them to either hug or slug it out.

Back at my table, Chad Sayers, Forrest Coots and photographer Bruno Long pore over a topo map of the Scottish Highlands. My old friend Grigor Browning is with us. He’s a native Glaswegian, but has skied around the world. By day he designs racecar suspension, but this night he’s downing pints and pointing us to the goods. The raucous scene around us isn’t quite as gritty as in the film Trainspotting—one of my only Scottish points of reference—but it certainly evokes some of the energy…