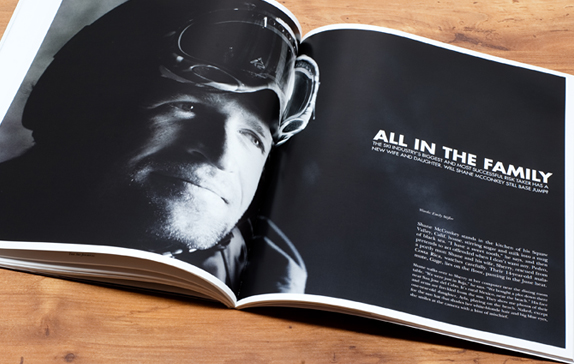 A revealing interview with skiing’s biggest innovator and risk-taker. Now
that Shane McConkey has a wife and daughter, will he still BASE jump?
Contributor Emily Stifler probes the mind, motives, and ski quiver of Squaw
Valley’s comedic son, and shows how Shane’s parents, accomplished skiers
themselves, formed his love of mountains at an early age.

“Shane McConkey stands in the kitchen of his Squaw Valley, California home, stirring sugar and milk into a mug of black tea. “I have a sweet tooth,” he says, and then pretends to be offended when I don’t want any. Pedro, a portly mutt Shane and his wife Sherry rescued from Costa Rica, watches Shane carefully. The fourteen-year-old malamute Gage lies on the floor, panting in the June heat.

Shane walks over to Sherry at her computer by the dining room table. “We were just in Baja,” he says. “We bought a plot down there near San Jose del Cabo. It’s rural Mexico, near the beach.” His face and arms are freckled from the sun. They show me photos of their one-year-old daughter, Ayla, playing on the beach. Naked, except for the sun hat that shades her white-blonde hair and big blue eyes, she smiles at the camera with a hint of mischief…”