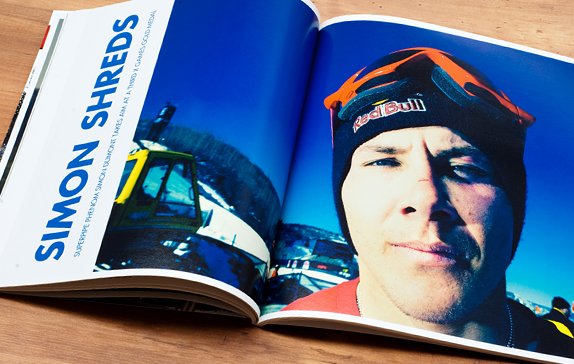 Simon Dumont is driven. His world-record quarterpipe air, X Games gold medals, prime-time talk show appearances, and groundbreaking video segments have been well documented. But few know him as well as filmer Kris Ostness, who sits down with Simon to get inside the head of the ever-innovative freeskier whose best years may be ahead of him.
Module: gallery_album
Item: Simon Dumont
Displays the photo gallery for a selected Gallery Album.

“Back in 2005, cameraman Henrik Rostrup lured Simon Dumont onto our film project, Teddybear Crisis. The 18-year-old arrived at my two-bedroom apartment in with his second X Games gold medal, as well as pretty much our entire European film cast.

Simon had just successfully defended his superpipe title and many regarded him the best halfpipe skier in the world. He struck me as something of a rebel gymnast who had eschewed the mats for snow. He was short, stocky with fast twitch muscles, and had an uncanny balance you could read by the way he walked. For the next five weeks the tiny living room was transformed into this giant dude slumber party. We got a big screen, a Xbox (on which Simon dominated James Bond 007), and he and Jon Olsson loved, loved, to go bowling. I drove them everywhere until finally surrendering my car to Jon on one condition. He was not to let Simon drive.”