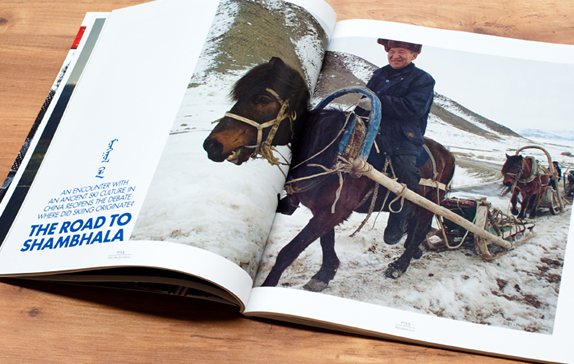 What if we told you skiing could be traced back as far as 211 BC in China’s Altai Mountains? Lisa Richardson discusses a trek to the Continental Pole of Inacessibilty—the most landlocked place on the earth—where, in a small village, people ski on hand-shaped 250cm wooden planks, just as they have for thousands of years. But, their culture is being threatened by an invasion of tourists, and the future of skiing’s pioneers, the Tubek people of Northwestern China, remains uncertain.

“In the corner of Naheed Henderson’s home in Pemberton, British Columbia stands a pair of unusual-looking wooden skis. Roughly eight feet long (or an eyebrow-raising 250 centimeters for the metric-minded), they were hewn from a Siberian spruce log, chopped in half with an axe and hand-planed to precision. The tips are bent exaggeratedly upward. The attached skins, which were fashioned from six horse legs, are worn away in spots, and there are markings along the skis where someone performed the odd repair job until finally the skis were considered too worn out to be of use, and tossed away.

They were crafted by an old man who doesn’t remember any male in his family who didn’t ski, a man who would use these boards to chase boghur (similar to a North American elk) down each winter in the Altai Mountains…”