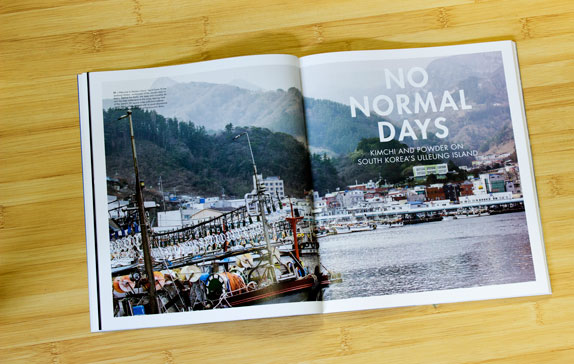 Ulleungdo is a small volcanic island 75 miles off the east coast of South Korea. Officially known as “Mystery Island,” most of its 28-square miles are wild and undeveloped, punching from the ocean to over 3,000 feet and covered by the country’s highest snowfalls. It is a land of squid boats, storms and sea stacks. It is also home to a small population of backcountry skiers whose passion for the sport is generations deep. There are no normal days on Mystery Island.

Eliel is the first of us to vomit. At first we laugh at him and his weak belly. A few minutes later, we are all desperately trying not to join him in one of the ferry’s tiny, stainless steel bathrooms.

We are 10 minutes from the port of Pohang enroute to Ulleungdo, a small volcanic island in the middle of the Sea of Japan. Yesterday, photographer Garrett Grove, skiers Carston Oliver and Eliel Hindert, guides Max Kim and Ryu Roto, and myself learned the ferry wouldn’t be running due to bad weather. Then we thought they were being conservative. Today, we decide they’re insane to be running it at all.

Soon the waves actually lift us off the floor. Folks are obviously expecting the suffering they’re about to experience over the next four hours; curled up on the floor like refugees, many have a ready supply of puke bags. Sobs fill the deck, from children and adults alike, a war zone of gastric distress. Around us the sounds and smells continue far longer than seems physically possible. The human stomach should only be able to hold so much…