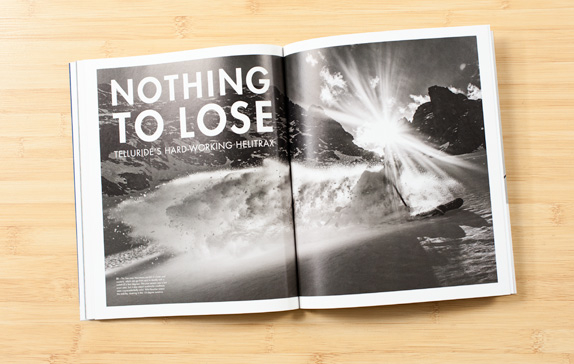 Colorado’s San Juan Mountains can claim some of the most intense terrain in the Rockies, as well as one of North America’s touchiest snowpacks. It’s not the ideal setting for a heli ski operation, yet in 1983 a group of four exiled Telluride skiers decided to start one anyways. Thirty years later, their company—Helitrax—is not only alive and thriving, it’s also one of the hardest-working heli ski operations in the business.

Across the valley, a plume of what is either steam or smoke billows from a hole burrowed in the snow. Nearby sits a rusted cluster of storage containers, accessed by a hacked-in cat track. Neon safety fencing rings the entirety of the operation—which is, our guide Joseph Shults tells us, an active gold mine. A few sooty craters pock the snow above, the remains of the heli-assisted control work Shults did a few days before.

On our side of the valley, another few of buildings sit below. These are wooden, weathered and obviously old, the remains of a century-old mining boom in the area. They’re also our immediate destination…