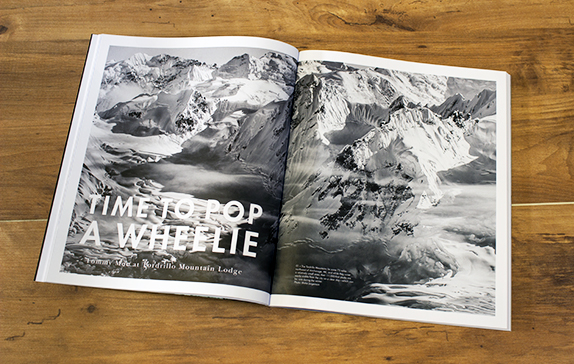 A luxury heli operation may seem an unlikely locale for a Montana-born, backwoods-cabin-raised Olympic champion, but along with co-owners Mike Overcast and Greg Harms, Tommy Moe has been helping run Alaska’s Tordrillo Mountain Lodge for almost a decade. Surrounded by 11,000-foot peaks and receiving over 600 inches of annual snowfall, the reasoning that drew the trio into the Alaskan bush is obvious. From Olympic podiums to big-mountain lines, welcome to Tommy Moe’s backyard.

As we depart the small airstrip on a frozen lake adjacent to the Anchorage International Airport, our pilot informs us we will be flying into some weather. The big engine of the de Havilland DHC-2 Beaver roars, and we lift over endless rows of Alaskan bush planes, their landing skids fitted with skis for winter.

The bush thickens below, and the sprawl of the Aleutian and Alaska ranges dominates the view out the small window. An hour later, the 50-year-old craft touches down and taxis toward a log-cabin lodge—both archetypal and impressive—and a grinning man comes out to greet arriving passengers. Slapping high fives, tossing bags and unloading skis, he bids the departing group goodbye as they load into the plane. Nothing suggests this host is Tommy Moe, the first American to win two Olympic medals in skiing, or that the lodge—and the huge peaks behind it—are his domain.