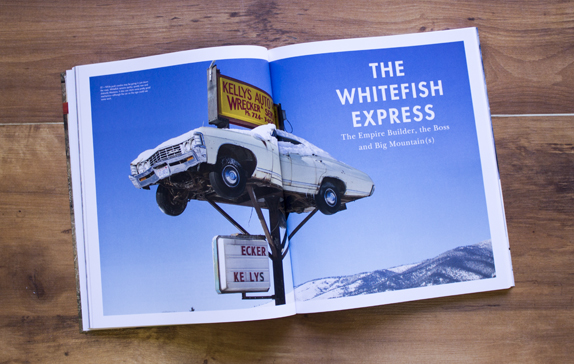 In 1928, Lloyd “Mully” Muldown stepped off the Empire Builder rail line in Whitefish, bringing with him a love for snow that would become an integral part of the small Montana community for the next 85 years. And despite recent changes in resort ownership and the inevitable corporate creep experienced by most mountain towns, Whitefish remains true to Mully’s legacy and its authentically Montanan reputation.

It’s a 13-plus hour ride from Seattle’s King Street Station to Whitefish, MT, and an incredibly comfortable way to travel.

Beers in the lounge, reading in the room, unhurried meals in the dining car, all assisted by the train’s equally mellow staff, the majority of which would look quite natural adorned with pocket watches and white gloves. The route, having shaken off mountain passes with a tunnel 85 years ago, dips under the Cascades and weaves through peaceful, rural countryside; travel can be quite unobtrusive without billboards, gas stations or fast-food restaurants.

While I’m not too keen on the violent parts, ever since I read Agatha Christie’s Murder on the Orient Express I’ve had a thing for trains. I also have a thing for powder, so I am quite excited watching from the window of my Amtrak sleeper car as the miles rumble by. To step from a train and be skiing in less than an hour? Timeless…