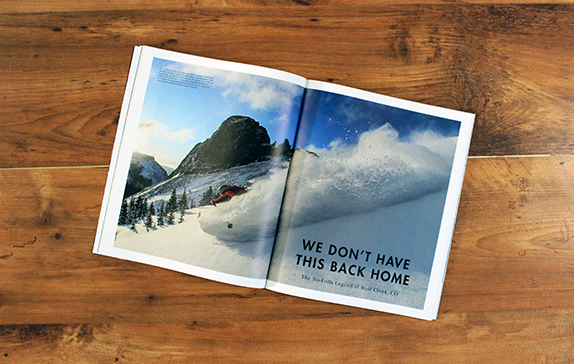 Founded a half-decade before Aspen and tucked deep in rural southwestern Colorado, Wolf Creek Ski Area is legendary for its near-coastal sized snowfalls, empty lift lines and classic, small-town atmosphere. And it’s deserving—both the ski area and nearby Wolf Creek Pass are an icy catcher’s mitt for storms otherwise unheard of in the Rocky Mountain State. Now under the threat of development and with local-focused improvements in the works, Wolf Creek remains the wild-west powder house just up the road.

The “Gun Barrel” is an arrow-straight section of Highway 285 that lends itself to speeding. It cuts through Colorado’s San Luis Valley, a high desert plateau bordered by the Sangre de Cristo Mountains, which means “Blood of Christ.” It only takes one sunset along the Barrel to understand where the name came from—home to a plethora of 14,000-foot-plus summits, the snow-covered peaks scratch the darkening sky, red in the evening alpenglow.

Both ends of the Gun Barrel are peppered with tiny, Western-esque speed trap towns like Saguache, Villa Grove and Center, but along those dozens of uninterrupted miles speed limits become irrelevant. With a good set of binoculars you can easily avoid the seldom-present state trooper, and it’s a welcome respite after grinding over the previous multiple snow-laden passes. I’m about halfway into my journey to Wolf Creek, a western pilgrimage I’ve made multiple times every year for two decades, and the Gun Barrel is one of my favorite parts…