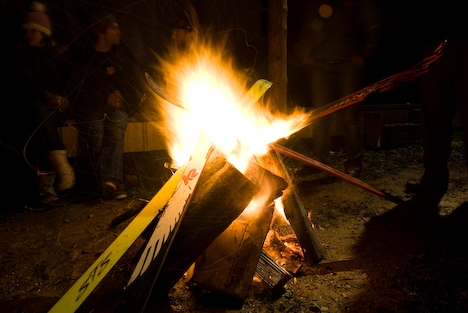 It was mid-November and it hadn’t snowed in weeks. The people of Golden, British Columbia, were getting antsy. Not only was Kicking Horse lacking snow, nearby resorts such as Sunshine Village, Alberta, had delayed opening due to a shortage of the white stuff. Rather than sit idly by, yours truly and a contingent of snow-jonesing locals banded together to appease Ullr with a ritual ski burning. Piling a couple pairs of rock weathered K2’s onto the fire, we worked through a cube of Pilsner and a bottle of fireball, sitting, waiting for Ullr to respond. And respond he did. Flakes started to fall from the sky–big, thick, sticky flakes. As the storm came slowly across British Columbia’s interior, it was apparent that this was no early season trickle–it was a full on blast of winter.

Four days later, the drive west over Roger’s Pass and through the Coquihalla looked entirely different. Sideways snow obscured the tail lights of chain adorned big rigs working their way westward. More importantly, the resorts were reporting snow–lots of it. 37cm (14 inches) and counting was enough to get Sunshine Village open, while the site of the ski burn, Kicking Horse Resort, is now reporting 132cm (52 inches) of fresh over the past week, deeming the alpine ready to go for those willing to hike for it. Whistler-Blackcomb is opening early with 95cm (37 inches) over the past seven days and plenty more in the forecast. For those of you lucky to live enough in BC, winter is here. Thanks Ullr!