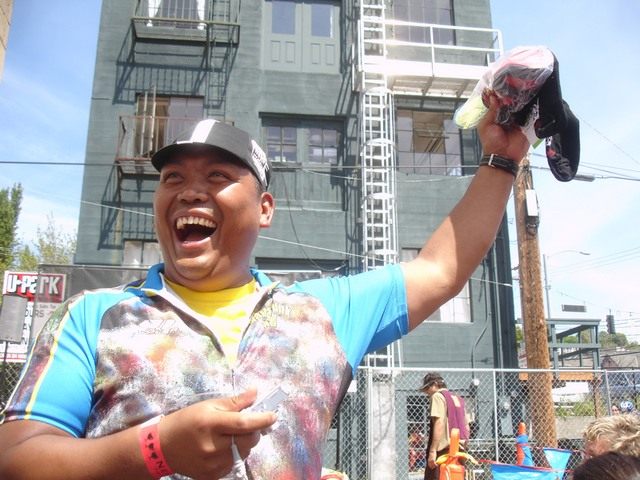 Self proclaimed “Biggest Bike Scavenger Hunt in the World”, the New Belgium Brewery Urban Assault is a funky urban bike race which guides you all over the city—in this case, —with a bunch of unique stops along the way. While a typical bike race would be from point A to point B, this one was a bit different as it requires navigating a team to checkpoints around the city without a pre-set course. The catch was that each location has interesting activities to accomplish before moving onto the next stop. Big Wheels, horsehoe toss, three-legged race, two-person skateboarding…you get the idea. The first team to cross the finish line receives a super sweet pair of New Belgium Bikes and bragging rights for the next year.

While I often ride my bike to work, around town and local drinking establishments, this was my first cycling race and I was a bit worried going into it. Pre-race, being one of the few without full spandex suits and super fancy road bikes did not help my nerves. Once the race started and figured out that I could actually keep up a fast bike pace, I did settle down and gave the race all I had. After charging all over town and flying through the obstacles, the Funny Feelings LLC team crossed the finish line in a respectable 15th place. Not bad for a couple guys in cutoff shorts.

Some helpful hints from a seasoned Urban Assaulter—go fast, draft, skinny tires, take the Bonus quiz, know your route, take shortcuts and go fast—certainly helped. The Urban Assault was hands down the most fun I have ever had on a road bike and, while it may not appeal to the seasoned cycling racer, I highly recommend the race and hope to join in on the mayhem next year. The cost of entering was not cheap at $47 per perso, but includes a couple beers, swag, food, bike bell, huge price raffle and the cash goes to local charities. An all day event and well worth the entry fee.

More Urban Assault races will be going down in Austin, TX, Ft. Collins, CO, Denver, CO, St. Louis, MO, Chicago, IL and Minneapolis, MN this summer. Thanks to New Belgium Brewery and the other fine sponsors for putting this event together.

at the start line

cruising on the mini bike

big hair is back in style

these youth placed in the family division, but were not old enough for the beer garden