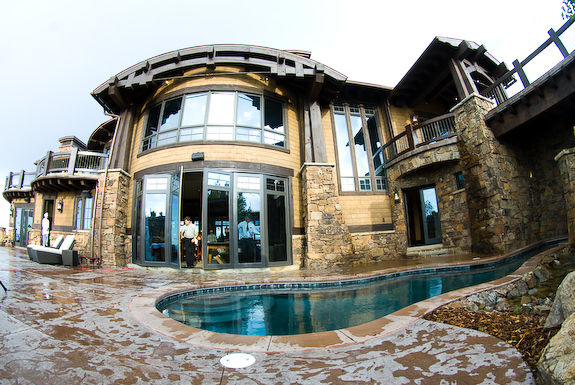 Temperatures in Southern Utah routinely climb into triple digits during the summer. The best way to escape the heat? Make for one of thousands of slot canyons in the area.

The trailhead at Kannaraville Falls sits in a dusty parking lot below jagged, parched hillsides. But a 30-minute hike takes you into a whole new world. It begins with a gentle stream alongside a dirt road (watch out for rattlesnakes), before ascending into a gorge flanked by large, overhanging rock walls speckled with caves. Then, suddenly, the mouth of the slot canyon appears: twisted red rock no more than ten feet wide and knee deep water over loose pebbles, spiraling lines undulating towards a slit of sky overhead. The temperature immediately drops a welcoming twenty degrees.

A series of small waterfalls is the main attraction of Kannarville, ascended via makeshift ladders and ropes and leading past a small, natural waterslide up into the mountains. We split into smaller groups and explored the confines of Kannaraville, walking up a couple hours past the families and into a more isolated section of canyon, before turning and descending into a warm wind pushing the desert heat up into the mountains.

A quick respite at Zion National Park’s Northern reaches and down into Cedar City, an evening of Tony Award winning Shakespeare took us out of the dirt-and-dust element and into a bit of culture, before sampling the local vibe at Toadz Bar, where Wranglers are the norm and a purple t-shirt will get your sexuality questioned. A cover band played CCR into the night.

The final day of Camp Wasatch brought us back into the greater SLC area and up to Park City, where Utah Olympic Park provided bobsled rides (top speed 70mph), zip lines, and a glimpse into the sheer size of Olympic ski jumping ,as men and women alike flew 300 feet on summer training ramps. After checking into our luxury accommodations in Park City, it was time for the Dream Home: a veritable castle of a house perched high up on Deer Valley, it takes two gates, a security guard, and a winding drive into perhaps the most exclusive resort in the country past the mansions of unnamed celebrities and politicians and perfectly manicured abodes of the rich and famous.

Indeed, the Dream Home, which currently is on the market in the $18 million range, was a glimpse into the unattainable world of celebrity, with just a few of the features including a video golf simulator, secret rooms in the basement, an elevator, a retractable television built into the footboard of a luxury king-sized bed, and a staircase that probably clocks in at a cost somewhere beyond a two-bedroom condo in the pacific northwest. With gourmet catering, trucked in blackjack, craps, and roulette (for points and prizes, not dollars), and a crew 30-deep, we were living the seven-figure lifestyle on a five-figure salary. A far cry from tromping around the desert of southern Utah, and a fitting end to a diverse three days at man camp with an itinerary that felt more like two weeks.

Many thanks go out to Ski Utah, Brian Head Resort, Resorts West, Jessica Kunzer, Clayton Scrivner, Henry Hornberger, Lincoln Hoffman and the many others from Cedar City to Park City who helped to make this one of the most memorable trips I’ve been on in a while…at least for a trip without snow.

See you in Utah this winter.