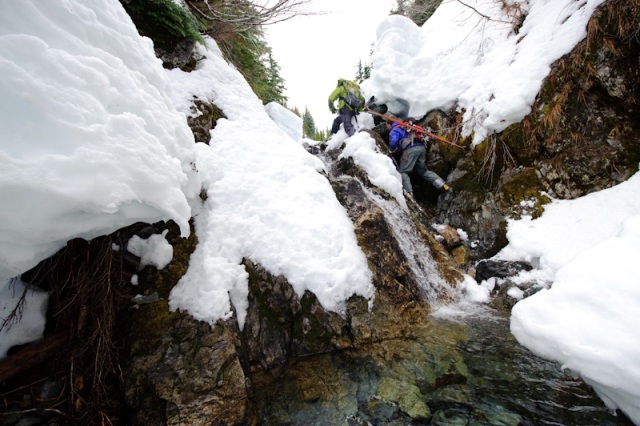 “Dude, that’s gonna be up bitch getting up that bank. I don’t know if it’s gonna happen,” I said to Pat. He was nearly out of sight, seven feet down in the bottom of a creek bed. “I don’t think you can even get out of there.”

Pat stared up at the walls with a sigh. “Jesus. The creek even looks easier,” he said, looking up and down the drainage. Then his face lit up. “Let’s hike up the creek!”

There was obviously some hesitation. But something about Pat’s idea sounded enticingly sadistic. We tossed our skis on our shoulders, loosened our boots and headed upstream.

It was the end of January at Mt. Baker, where once again the weather was defying all physical laws regarding H?O. After weeks of 40-degree snow and 30-degree rain, Baker somehow still had a respectable, 100-plus-inch base. Holding it down in the face of adversity? That’s Mt. Baker for you.

The night before, we had decided to take advantage of the forecasted sunny day and tour out to the top of Mount Anne. Apparently, despite the current balmy temperatures and sunshine, the wet weekend had sealed off any good turns, and we punched our through an inch-thick rain crust on top of 8 inches of sugar. We headed up, hoping to find better snow at higher elevations.

The ascent was infuriating. All around us lay classic Cascade lines, untracked and begging for turns, but our steps kept crunching through the insidious crust. We headed for Shuksan Arm to try some turns in Hidden Bowl.

Before dropping in, Garrett and Pat decided to do some cornice-trundling, only to have the cornice blow away from the sweaty, straggly tree holding it in place. Garret ended up with a rope-burn and Pat with a racing heart after nearly being yanked into oblivion.

And then we were at the creek.

At first it was a bitch. The rocks were slick, we were in alpine boots, and the water was COLD. We struggled over snow bridges scrambled up waterfalls. But, having reached a spot where it seemed we might be able to climb out, our eyes kept being drawn back into the creek.

“It looks like we’re free,” Garrett said, and then added, half-jokingly, “or we could keep heading upstream.”

We weren’t joking. It was back into the creek.

The next hour belonged in the movie Cliffhanger—rappelling off alder branches, free-climbing snowy overhangs, making mossy 5.8 moves in ski boots and javelin-ing our skis up onto the snow bridges. We even had to stem up a waterfall. Stallone ain’t got shit.

Eventually we came to steep, narrow section where, no matter how radical we got, going farther was impossible. The riparian adventure finally at an end, we struggled up a boot pack up and out, towards the traditional exit and guaranteed freedom…

…and found ourselves separated from the cat-track by an open, 10-foot wide, 12-foot deep streambed. After hours of struggling towards the magical ease of the chair, we were faced with another hundred yards of boot-packing. Or not.

“Fuck this,” Garrett said. He tossed his skis and poles over the gap and leaped.

His foot busted through the edge as he jumped and he landed Vertical-Limit style on the other side, arms clinging to the snow and legs dangling into the hole.

But he made it.

After the standard “sick!”s and “hell yeah!”s, we all risked the leap, Tristan even getting extreme with his skis on his backpack. Starved but stoked, we crashed through the trees and tumbled out onto the cat-track above Chair Eight, covered in pine needles and sweat, just as my brother and some friends came riding by.

“That sounds horrible,” my brother said, after hearing the day’s events. “It wasn’t good inbounds, but it was better than that.” We agreed, smiled and made some jokes about some of the sketchier parts of the creek bed. We skied up to the lodge at 4 p.m., seven hours and many miles after those first horrid turns, just in time to nab free pizza from the cafeteria.

We were tired, scratched up, sweaty, and, after hours of skinning, had only made three or four hundred feet of shitty turns. It was 40 degrees out and the parking lot was a muddy mess. Loading our gear into the car, Tristan voiced what was going through all our minds.

“It may be warm and the snow may have sucked and we may have barely skied,” he said, “but that was one of the funnest days I’ve had in awhile.”