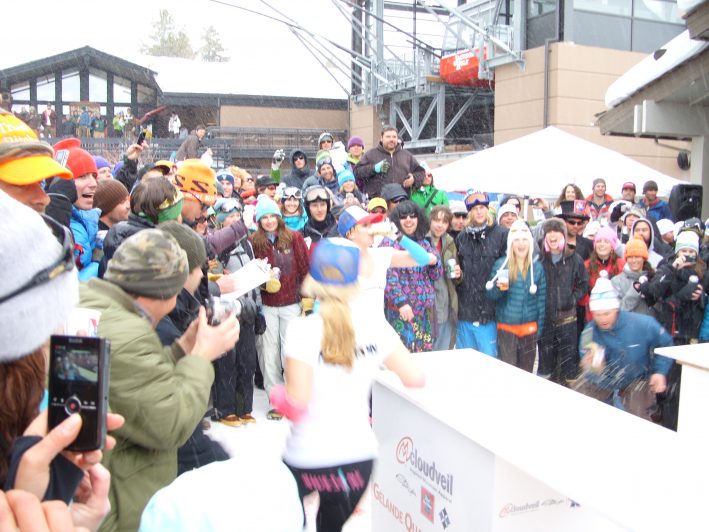 Jackson Hole, Wyoming (February 25, 2010) – Imagine a contest based around sliding a beer down a table with the object being to drink as many beers in the shortest amount of time possible. This is a three round, two teams at a time, head-to-head contest with a scoring structure that awards extra points for catching beers a pint glass by the handle and doing a spin move beforehand. Yeah, you get the idea…an adult-beverage-fueled-kick-ass-contest. This is Gelande Quaffing.

Gelande Quaffing is an old Jackson Hole Air Force game that started back in the ‘80’s when a beer was slid down the bar at a local Jackson Hole watering hole and a JHAF member, acting on instinct, caught the pint moments before the beer hit the ground. Now 25 years deep, the World Championship Gelande Quaffing contest went down February 24, 2010 in Jackson. Teams from the who’s-who of Jackson Hole businesses had thirsty quaffers registered for the event alongside company entries and even an intentional contingent: Smith Optics, Powder Magazine, Teton Village Sports, Brew Pub, New Zealand (spy’s from a foreign land), Stormshow, TGR, Jackson Hole Airforce and the crowd favorite, The Stage Coach, which featured an all girls team.

Highlights of the night included the The Stage Coach (all girls) knocking out Powder magazine in the first round of the quaff, the crowd chanting ‘USA’ (no flags were waved) when the New Zealand team took the stage, Dammit Anne of The Stage Coach getting her front teeth knocked out by a fast sliding pint glass and local ski filmer ‘RV’ of the Stormshow team pounding two pint glasses at the same time.

The final round of the quaffe had Teton Village Sports going at it with local film crew Stormshow. Rumor has it that the Stormshow team was holding secret practises for weeks coming up to the event and these practise sessions sure paid off as they walked away with the title of 2010 World Gelande Quaffing Champions.

(edit correction, the Stormshow team denied practises as these guys are naturals)