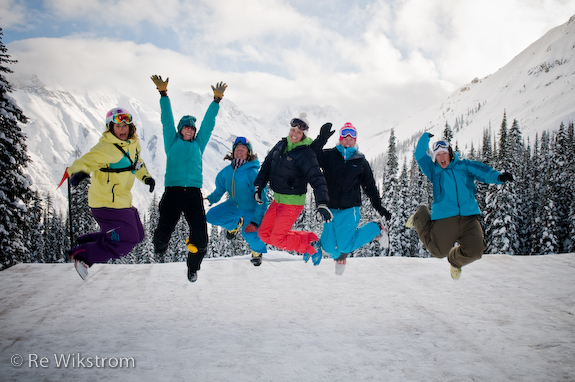 One week, one lodge, one photographer, and four teleskiers in neon; welcome to Icefall Lodge, British Columbia. Utah-based photographer, Re Wikstrom, answers a few questions about being the technology infested, freeskiing group in the middle of the Canadian Rockies.

Re Wikstrom shoots and skis in “Wasangeles”, also known as the Wasatch Range. What happens when you transplant Wikstrom and a few teleskiers, Shaun Raskin, Candy Froerer, Martha Burley, and Paige Brady, decked out in bright yellows and blues, hot pinks, and cameras to a backcountry lodge in B.C? The results involve out-house jib sessions and lines titled Four-Play Pillows. As Wikstrom puts it, “We were the neon skittles crew amongst the super purist backcountry travelers.” The Ski Journal caught up with Re at the Backcountry.com warehouse in SLC, where she works as a product photographer, to find out more than just the color of the team’s outerwear.

Was the helicopter ride into the lodge your first?

Technically my second, but my first over mountains. I easily took over 100 photos.

I didn’t know any of the girls before the trip, and I couldn’t have asked for better group dynamics. I feel like we were immediate friends and the trip was chock full of laughs and jokes from the moment we packed the truck.

Any difficulties living in the lodge?

It wasn’t frou-frou luxury living by any means, but for us, there was definitely nothing hard about spending a week up there.

Do you shoot with teleskiers often?

No, this was the first time. In the end, I don’t think it’s much different than shooting alpine skiers. I think it is more about adjusting to an individual’s style.

Was one week long enough to figure out the girls’ style?

Yes and no. I have a pretty good sense for each skier, but the weather didn’t facilitate as much diversity in skiing and shots as we hoped.

The weather was both good and bad. Good for skiing because it snowed every day and every night, but wasn’t enough to make it unstable (until Friday), but the cloud cover was really dark for shooting photos. The last full day we were there it had snowed a ton, but that day we also heard three or four natural avalanches.

What does an avalanche in the middle of the desolate Canadian Rockies sound like?

Kind of like an airplane flying over head. We played a game that day called “airplane or avalanche.” If it was a short, intense sound with a quicker rise and fall, then it was an avy. When we heard a longer, constant, low noise, it was a plane.

So, how many airplanes did you hear out there?

Actually, you would be surprised, if our guesses were accurate.

All girls on the trip? Care to elaborate?

It’s no secret that I focus my work on shooting with women, but I don’t focus on the fact that it was an all girls trip. Of course I think its rad, but the real interest to me is in the individuals who made up our group, their personal style and characteristics, and the story that unfolded along our journey.

Did your group have a guide?

I was a little worried about this going into the trip because there is a fair amount of glacier travel up there, but in the end we decided against paying for a guide. Larry Dolecki, the owner, participates in a website called wisegoat.com because Icefall is not included in the Canadian Avalanche Center’s forecasted zones. We checked Larry’s updates before hand and also got a debriefing from him upon arrival. We were also fortunate to have the advice of a few of Larry’s friends who had come up for the week and were able to help us find the general “lay of the land” and give us their local’s knowledge of the terrain. During the week I gained much respect for Larry, his Icefall operation, and his general presence and exploration in the Western Canadian Rockies. The lodge is built in the perfect spot; when it is cloudy there is plenty of skiable terrain in the trees and when it goes blue there is a massive amount of alpine terrain. We barely scratched a scratch in the surface and are already talking about a return trip.

What was the best part about shooting at Icefall?

Knowing that we could hike anywhere and not see 10 other Utah photographers had gotten there before us. It’s definitely not the “Wasangles.”

Self portrait in front of Icefall Lodge.